LONDON: A wave of shock has gripped the world as the United Kingdom, in a surprise result, voted to leave the European Union. Leading up to the votes being counted, pollsters had given the edge to the “remain” campaign. By the early hours of Friday, as results started coming in, “leave” votes jumped marginally ahead, with the final results tipping in favour of “leave” 51.9% to “remain”’s 48.1%.

And just like that, with a few hundred thousand votes being the differentiator -- the UK voted to leave the European Union. British Prime Minister David Cameron announced his resignation, as it became clear that the political gamble he had undertaken was a grave miscalculation.

The results were surprising not just because the opinion polls all gave “remain” the edge, but also because of all the political parties represented in the House of Commons, only two -- with seven MPs between them -- formally supported the “leave” campaign. Additionally, the banking industry, business community, trade union leaders amongst others all cautioned against the UK deciding to leave the EU.

The British people, albeit by a small margin, decided to ignore all this advice. 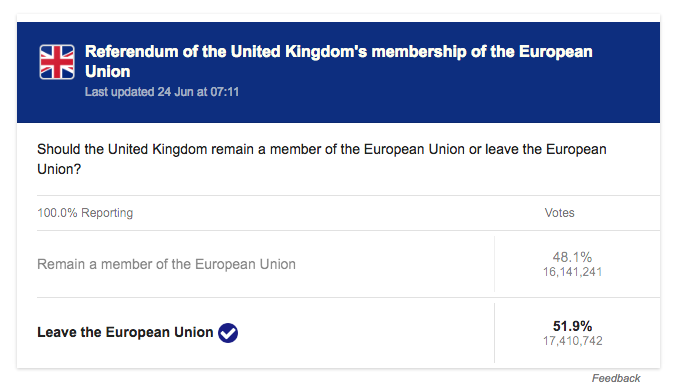 In fact, the “remain” campaign failed to make a compelling case for remaining in the EU. Instead of focusing on the benefits of remaining in the EU, the campaign seemed to exaggerate the risks of leaving. The “leave” campaign was able to counter this with its own exaggerations, as Britain came to witness “the most divisive, vile and unpleasant political campaign in living memory.” Labour MP Joe Cox was shot in her constituency by 52 year old Thomas Maire, who shouted variations of the slogans “Britain First”, “Keep Britain independent” and “Britain always comes first” as he plunged a knife into her body several times as she lay dying.

The “leave” campaign managed to appeal to the British people -- who are angered by the seemingly distant, arrogant and unaccountable functioning of the European Union. Issues of free movement of labour -- that raised concerns about the influx of migrants from Europe’s poorer countries putting additional stress on the UK’s infrastructure and job market -- was a key point of contention.

It is worth reiterating that although the political campaign leading up to the referendum was beset with racist, xenophobic and anti-immigrant rhetoric, the decision to “leave” is not necessarily rooted in that discourse. For instance, several prominent Britons of South Asian origin supported the “leave” campaign, including Priti Patel, the Conservatives' Employment Minister.

Instead, the “leave” vote can be interpreted as a vote for change, with the common people in Britain having paid the price for austerity measures that were instituted in response to the 2008 economic crisis. Is Brexit the solution to that? Unlikely. Additionally, there is a legitimate concern that the result will lead to a more insular and inward looking United Kingdom.

Further, the results reveal a divided country -- as London, Northern Ireland and Scotland overwhelmingly voted to “remain.” This has a few implications. For one, it shows that London is deeply cut off from the rest of the country, with the latter having long resented the capital city’s monopoly over power and decision making. As Simon Jenkins notes, “a half-century of metropolitan arrogance and centralism, to which all governments and all cultural institutions have subscribed, has gone suddenly rotten. Future British governments can no longer pretend at devolution. The capital has grown too big, too fat and too rich. Brexit will take it down a peg – or three.”

In Northern Ireland, the government has said the UK vote to leave the European Union will have "very significant implications for Ireland". The Irish government had encouraged citizens to vote to “remain”; Northern Ireland voted to remain in the EU Referendum by a majority of 56% to 44%.

As for Scotland, the “remain” vote triumphing raises pertinent questions about Scotland’s own future -- with the independence movement gaining momentum and making it possible that Scotland decides that remaining in the EU is more important that its union with England.

The vote was also divided along generational lines -- with younger voters, especially students and recent graduates, voting “remain.” The older generation was more likely to vote “leave.” Britons aged 65 and over are more likely to be Eurosceptic. The results, however, will impact the future generation disproportionately.

The details of this impact remain anyone’s guess -- as the Brexit, as it has been dubbed, can mean several things. Article 50 of the Lisbon Treaty, which guides member states wishing to leave the EU, is a vague map towards the exit door. An interesting point here is that the terms of the Brexit will be decided not by British politicians or the country’s people, but by the other 27 nations of the EU. Once Article 50 is triggered, it could take the UK upto two years to actually leave the EU. After this, it will need to renegotiate its relationship with EU countries.

The EU -- which will decide the terms of the exit -- has its own challenges. For one, the Brexit may pave the way for other countries choosing to leave. Polls have shown between a quarter and third of people across Europe are now deeply hostile to the European project. For instance, a recent Dutch survey suggested 54% of the people wanted a referendum. The populist Danish People's Party, which wants renegotiation with the EU, hailed a "courageous" decision by the British. Mateo Salvini, the leader of Italy's anti-immigration Northern League, tweeted: "Hurrah for the courage of free citizens! Heart, brain and pride defeated lies, threats and blackmail. Beatrix von Storch, of Germany's Eurosceptic AfD party, praised "Independence Day for Great Britain.”

The statement of assurance was not enough. The best indication of it not being enough is the response of the global stock markets -- which fell heavily as news of Brexit broke, with the pound taking a severe hit. Billions were wiped from share values as Europe saw London's FTSE .FTSE drop 6 percent in early deals, Germany's .DAX and France's CAC 40 .FCHI slump 7.5 and 9 percent and Italian and Spanish markets plunge more than 11 percent.

According to Reuters, Britain's big banks took a $130 billion battering with Lloyds (LLOY.L) and Barclays (BARC.L) plunging as much as 30 percent. EMINI S&P 500 futures ESc1 were down 4 percent and Japan's Nikkei .N225 ended down 7.9 percent.

The British pound collapsed no less than 18 U.S. cents, easily the biggest fall in living memory, to hit its lowest since 1985. The euro in turn slid 3.2 percent to $1.1012 EUR= as investors feared for its very future.