11 Killed In Airstrike On MSF Hospital In Yemen

NEW DELHI: At least 11 people have been killed and 19 injured in an airstrike by the Saudi-led coalition on a Yemeni hospital supported by Médecins Sans Frontières (MSF or Doctors Without Borders).

MSF said that the strike that killed one staff member took place around 15.45 local time. It targeted the organisation’s facility in the Abs district of Hajjah governorate, in northwest Yemen. 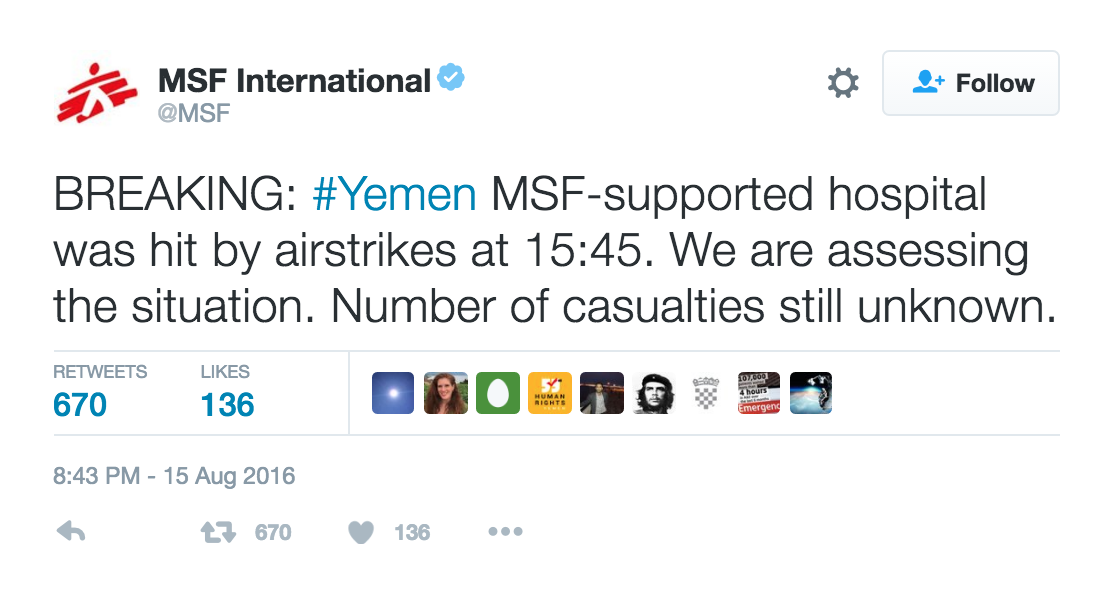 “Abs hospital has been supported by MSF since July 2015 and since then 4,611 patients have been treated at the facility,” a statement said.

Teresa Sancristóval, MSF desk manager for the Emergency Unit in Yemen, told media that: “This is the fourth attack against an MSF facility in less than 12 months. Once again, today we witness the tragic consequences of the bombing of a hospital. Once again, a fully functional hospital full of patients and MSF national and international staff members, was bombed in a war that has shown no respect for medical facilities or patients. An aerial bomb hit the hospital compound, causing 11 people to lose their lives.”

The strike on Monday was the latest in an increasing number of attacks targeting civilian areas in the war torn country of Yemen, with similar airstrikes targeting a food factory and a school in the course of the last week.

It is also, as pointed out by Sancristóval, not the first time an MSF facility has been targeted. In January, four people were killed when airstrikes hit a hospital supported by MSF in northern Yemen. Before that, an MSF clinic was attacked in Tiaz in December and an MSF facility in Sadaa, Yemen was hit in October.

MSF was also in the news last October as US aircraft hit a facility run by the agency in the war torn city of Kunduz, Afghanistan, killing 30 patients and staff.

There is a disturbing pattern in the above attacks, as MSF maintains that all warring parties are informed of GPS coordinates of the medical facilities in advance. In reference to the attack in Yemen, MSF said: “All warring parties, including the Saudi led coalition (SLC), are regularly informed of the GPS coordinates of the medical sites where MSF works and we are in constant dialogue with them to ensure that they understand the severity of the humanitarian consequences of the conflict and the need to respect the provision of medical services”, says Raquel Ayora Director of Operations. “There is no way that anyone with the capacity to carry out an airstrike or launch a rocket would not have known that the Shiara Hospital was a functioning health facility providing critical services and supported by MSF.”

Similarly, in the attack on the facility in Kunduz, MSF reiterated that its coordinates had been provided to the US coalition and their Afghan counterparts. “MSF wishes to clarify that all parties to the conflict, including in Kabul and Washington, were clearly informed of the precise location (GPS Coordinates) of the MSF facilities in Kunduz, including the hospital,” MSF stated.

In Yemen, the Saudi involvement behind the strikes is likely because the facilities that have been hit have been in rebel Houthi areas. Saudi Arabia, backed by the US, has been bombing Yemen since March 2015, in a bid to reinstate the president, Abd-Rabbu Mansour Hadi, and counter advances by Houthi rebels.

What has followed is a huge crisis, as attempts at peace talks repeatedly break down. Recent attacks include a potato-crisp factory that was bombed last Tuesday. 14 people were killed, most of whom were women. Another attack on Saturday hit a school in the Haydan district in northern Saada, killing 10 students all of whom were under the age of 15. An attack on the same day hit the house of the school’s principal, killing his wife, four children and other relatives.

General Ahmed Assiri, a spokesman for the Saudi-led coalition, has accused Houthi fighters of deploying military personnel in schools and hospitals, thereby building a narrative that justifies the strikes on civilian areas.