UN Refugee Summit: "No Cause for Comfort"

UNITED NATIONS (IPS): With record numbers of forcibly displaced persons around the world, many were left disappointed by the outcome of a high level UN summit designed to address the issue by bringing together world leaders on the sidelines of the UN’s annual General Assembly.

During the first-ever summit on Addressing Large Movements of Refugees and Migrants, global leaders approved adeclaration that aims to implement a more coordinated, comprehensive and humane refugee response.

“Today’s Summit represents a breakthrough in our collective efforts to address the challenges of human mobility,” said Secretary-General Ban Ki-moon in his opening address to delegates.

When the document is translated into action, more children can access education, more workers can seek jobs, and more people will have choices regarding mobility, Ban added.

However, UN High Commissioner for Human Rights Zeid Ra’ad Al Hussein cautioned against optimism, stating: “When millions of people see freedom’s invitation only through the flapping canvas of a tent; when they carry their children and possession on their backs, walking hundreds, perhaps thousands of miles; when they and their families risk drowning, and are kept cramped in appalling detention centres and, once released, risk abuse by racists and xenophobes. There is no cause for comfort here.”

“The bitter truth is that this summit was called because we have been largely failing…it is shameful the victims of abominable crimes should be made to suffer further by our failures to give them protection,” he continued.

More than 65 million people around the world have been forced to flee their homes, a population equivalent to the 21st largest country. According to a report by Save the Children, this imaginary country would have the fastest growing population in the world, rank nearly last in school attendance, and have alarmingly high rates of child marriage.

Numerous refugees themselves took part in the Summit, urging member states to act in light of such dire circumstances.

Addressing the summit was Yazidi human rights activist Nadia Murad Basee Taha who was one of over 5,000 Yazidi women enslaved by Islamic State. Once Murad escaped, she found her way to Germany as a refugee.

“You must know as leaders that whatever you do will impact either positively or negatively on the lives of simple people…you are the ones to decide whether another girl in another part of the world will be able to live a simple life or live in suffering and bondage,” she told attendees. “You and your families are not the only ones to deserve life, we deserve life too.”

Syrian refugee and Team Coordinator for Syrian Volunteers in the Netherlands (SYVNL) Mohammed Badran particularly highlighted the need to enhance access to education and other opportunities in order for refugees to rebuild their lives and contribute back to society. “If today world leaders are unable to find a solution for the Syrian crisis and the refugee crisis, then this summit is no different from the rest,” he said. 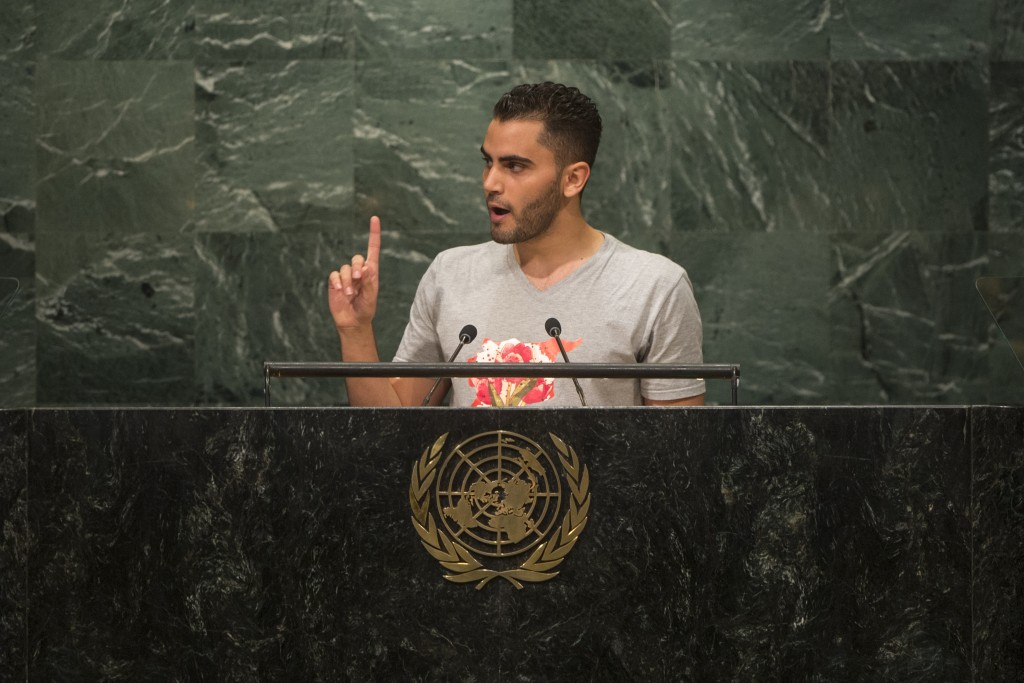 (Mohammed Badran, of Syrian Volunteers in the Netherlands (SYVNL), addresses the opening segment of the United Nations high-level summit on large movements of refugees and migrants. Credit: UN Photo/Cia Pak)

Many organisations simply saw the summit as no different to business as usual, calling it a “missed opportunity” and especially expressing their disappointment in the outcome document.

The initial draft of the Declaration proposed a global compact with clear commitments including resettling 10 percent of the world’s refugees annually and providing refugee children with education within 30 days. Upon negotiations however, this language was stripped in the final document adopted on Monday, ridding states of any obligation to welcome and educate refugees. Additionally, the international community delayed any form of agreement to a Global Compact until 2018.

“Instead of demonstrating that leadership and stepping up to take responsibility, [governments] have merely kicked the can down the road and put off a decision and a commitment to later and that is a tragic shame, particularly for the 21 million refugees around the world who have been waiting for action by the international community,” Amnesty International USA’s Interim Executive Director Margaret Huang told IPS.

Speaking to IPS, Oxfam International’s Executive Director Winnie Byanyima echoed a similar sentiment, stating: “What we got here are no concrete commitments to address this problem. What we got here was just some flowery language.”

According to an Oxfam analysis, six of the wealthiest countries only host 9 percent of refugees, including Japan which accepted a mere 27 refugees in 2015. This has left poorer countries in the Global South to bear the burden.

For instance, Lebanon is host to over 1 million Syrian refugees, amounting to almost a quarter of their population. Lebanese Prime Minister Tammam Salam expressed his dismay at the numbers, noting that more Syrians are born in Lebanon than are being resettled in other countries. “It is unthinkable that Lebanon could, alone, cope with an existential challenge of such proportion…when is the world going to do something for Lebanon?” he asked delegates. Similarly, Pakistani Prime Minister Nawaz Sharif, whose country hosts almost 2 million Afghan refugees, also noted the disproportionate burden of global displacement that has fallen on such developing nations.

Though U.S. President Obama announced plans to increase refugee resettlement to 110,000, Huang told IPS that his pledge is just a “drop in the bucket.” The UN Refugee Agency has estimated that more than 1.1 million refugees would need resettlement in 2016.

According to the Office for the Coordination for Humanitarian Affairs, only 39 percent of UN aid appeals are funded. This includes a refugee appeal from South Sudan which is funded at 19 percent, while Yemen and Syria’s regional refugee response plans are funded at 22 and 49 percent.

He pointed to Kenya which announced in May that it will close the Dadaab refugee camp, the largest refugee camp in the world, partly due to a significant decrease in funding. Elsewhere, the Jordanian government has sealed its border with Syria, trapping over 75,000 refugees with no access to humanitarian assistance.

“The Kenyas and Thailands and Pakistans and Jordans and Lebanons of the world should not be left to bear the burden alone—responsibility should not just be borne by those frontline states themselves, it has to be shared,” Frelick stated.

However, no such tangible commitment towards responsibility sharing was achieved at the summit as governments including Australia defended their restrictive refugee policies. In Australia’s case this consists of indefinite detention of asylum seekers in offshore centres in Nauru and Papua New Guinea., The United Kingdom argued that refugees should only seek asylum in the first safe country of arrival, further placing the burden on the Global South.

But some are hopeful for the future of refugees and migrant response. Save the Children’s Senior Director of Humanitarian Public Policy & Advocacy Bernice Romero told IPS that the summit did succeed in focusing the world’s attention on the plight of refugees and displaced people around the world. She added that the development of a Global Compact for equitable responsibility sharing by 2018 is the first step to what could be a meaningful process and action plan.

Others including Frelick and Huang are looking to President Obama’s Leaders’ Summit for more concrete commitments. Set to take place on 20 September, the meeting seeks to secure an increase in humanitarian funds, resettlement positions and legal pathways, and access to education and work authorisation.

“They are falling short of human rights principles, and we will not stop talking about it, we will keep mobilizing,” she said.