NEW DELHI: A top United Nations envoy has warned that the war battered Syrian city of Aleppo is in danger of becoming a “giant graveyard.” With thousands of civilians fleeing neighbourhoods in eastern Aleppo, senior United Nations officials appealed to the Security Council and the wider international community to come together and “do everything in their power to protect civilians and enable aid access to the besieged parts of the [war-battered city] before it becomes one giant graveyard.”

Painting a dire picture of the situation on the ground, the UN Special Envoy for Syria, Staffan de Mistura, told the UN Security Council that the “humanitarian tragedy” in Aleppo is only deepening as both ground and air assaults against the eastern half of the iconic city have intensified over the last two weeks, forcing an estimated 25,000 from their homes since Saturday.

“It is likely that thousands more will flee should fighting continue to spread and further intensify over the coming days,” he said, briefing the Council via video conference from Geneva, adding that he had strongly suggested that Ali Al-Za’tari, the UN Humanitarian Coordinator and Resident Coordinator in Damascus, together with international members from the UN Country Team, should head to Aleppo as soon as possible to rejoin national aid workers to assist the civilian population – on both the city’s east and west sides.

Mistura added that the war continues elsewhere – Idlib, Hama, al-Waer, Homs, north of Latakia, Western Ghouta, north-west of Damascus, and Eastern Ghouta. “Each deserves its own description, but the underlying theme remains the same: the continued dominance of military over political strategies, and the brutal price being paid by civilians in the process.” 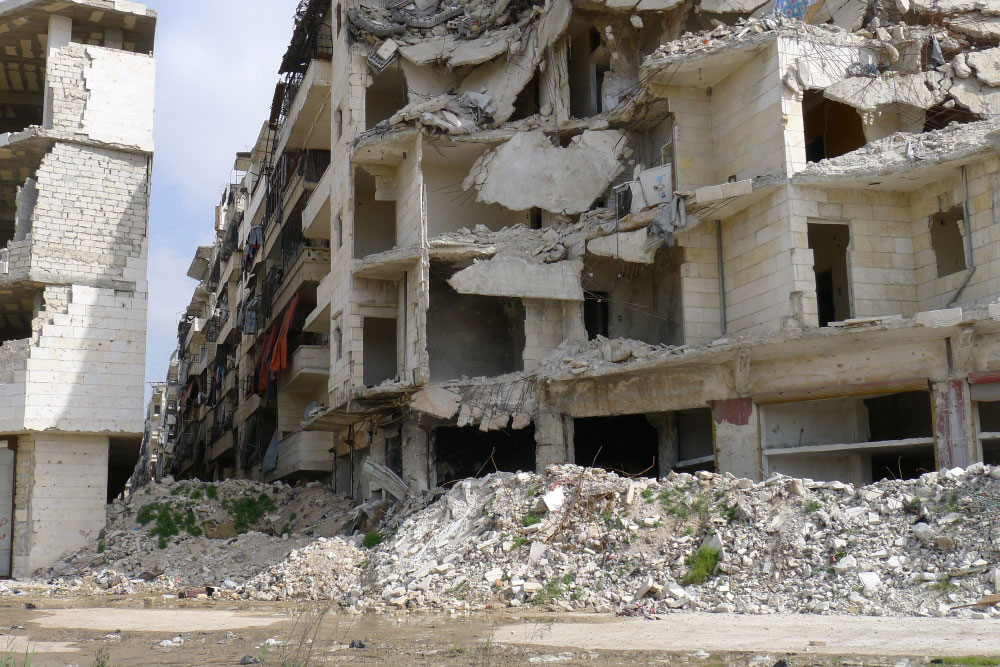 (Most Syrians left in Aleppo are too poor to leave and live in the carcasses of apartment blocks. Photo: Tom Westcott/IRIN)

Speaking via videoconference from London, UN Emergency Relief Coordinator Stephen O’Brien recalled that for over five years, the UN and the entire humanitarian community have raised the alarm about the devastating impact of the conflict in Syria on millions of ordinary men, women and children. “Our calls, and the requests, even the demands of this Council, have largely gone ignored.”

Security Council must come together and stop the brutality in Syria

O’Brien, who is also the UN Under-Secretary-General for Humanitarian Affairs, said that nowhere has the cruelty of the Syrian war been more grimly witnessed than in Aleppo, where the world has witnessed “bombs and mortars raining down in recent days, weeks and months – on civilian areas, residential houses, schools, medical facilities, water and electricity stations, and public markets. Constant, tormenting images of people murdered, bloody, and exhausted.”

Amid intensifying attacks on eastern Aleppo, he said that over the last four days, numerous civilians have reportedly been killed. "Just today we received a report that scores of people were killed in an airstrike this morning.”

“It may be too late for many of the people of eastern Aleppo, but surely this Council can come together, stop the brutality and also prevent a similar fate befalling other Syrians,” he said, telling the Council that what Syrians and the humanitarian community need to see above all is three things: real respect and protection of civilians (and civilian infrastructure); safe, rapid and unimpeded humanitarian access; and an end to brutal sieges once and for all.

Children under five know nothing but a lifetime shaped by war

To say that the situation is tragic would be an understatement, emphasized Geert Cappelaere, Regional Director of the UN Children’s Fund (UNICEF) for the Middle East and North Africa, who said “it is difficult to imagine what words could still adequately convey the unspeakable horrors endured by Syria’s children every day.”

Indeed, tens of thousands of children have already been killed. Millions have been uprooted, some more than once. Too many have been deprived of basic medical care and safe drinking water. Too many have witnessed the death of their loved ones and the destruction of the places they once thought are safe: their homes, their schools, their playgrounds. “Simply put, Syria’s children are trapped in a living nightmare,” he said.

“Children ask ‘why.’ We ask ‘why.’ The devastating downward spiral has to end. Today, every single child under the age of five has known nothing but a lifetime shaped by war,” he stated, stressing that protection of children should be, at all times, a primary consideration for all.

“We have failed them over the last six years, and we continue to fail the children in Syria. This is not only jeopardizing children’s lives, but the future of the country, the future of the region and the future of the whole world […] UNICEF renews its call on all parties to lift the sieges across Syria, and to allow and facilitate immediate, unconditional and sustained humanitarian access to all areas across the country.”

(Cover Photo: A nine year-old child sits in one of the neighbourhoods in the old city of Aleppo, Syria, holding his jerry can, looking for drinking water. Photo: UNICEF/Zayat. UN News Centre)