Who Is To Blame For Aleppo?

NEW DELHI: A planned evacuation of rebel-held parts of the Syrian city of Aleppo seems to be back on the cards after a new truce was announced. The new truce, rebel sources say, will be implemented Thursday, after which evacuations would begin. This was corroborated by the Syrian military, the Hezbollah and Russian media.

An earlier truce had collapsed on Wednesday, putting a pause on planned evacuations. Over the last few days, global media has highlighted the heavy casualties caused by the Syrian forces’ operation, with UN rights office spokesperson Rupert Colville saying that at least 82 civilians have been killed. Colville said that in some cases Syrian forces have entered homes and killed those inside, and in others “caught and killed on the spot” civilians trying to flee the crossfire.

This was the subject of the United States ambassador to the United Nations, Samantha Power’s speech on Tuesday. Power slammed her Syrian, Iranian and Russian counterparts for the humanitarian crisis unfolding in Aleppo, saying, “to the Assad regime, Russia, and Iran -- three Member States behind the conquest of and carnage in Aleppo -- you bear responsibility for these atrocities. By rejecting UN-ICRC evacuation efforts, you are signaling to those militia who are massacring innocents to keep doing what they are doing…”

“Denying or obfuscating the facts, as you will do today -- saying up is down, black is white -- will not absolve you. When one day there is a full accounting of the horrors committed in this assault of Aleppo -- and that day will come, sooner or later -- you will not be able to say you did not know what was happening. You will not be able to say you were not involved. We all know what is happening. And we all know you are involved,” she added.

Russia fired back. Vitaly Churkin, Russia's ambassador to the UN, slammed Power for acting like "Mother Teresa" despite America's "track record" in the Middle East.

"I wouldn't want to remind this Western trio [France, US, UK] which called for today's meeting and carried it out in a raised voice, about your role in the creation of ISIS as a result of US and UK intervention in Iraq," Churkin said.

"I don't want to remind these three countries about their role in unwinding the Syrian crisis, which led to such difficult consequences, and let terrorists spread in Syria and Iraq,” he said. "The weirdest speech to me was the one by the US representative which built her statement as if she is Mother Teresa herself. Please, remember which country you represent. Please, remember the track record of your country."

Meanwhile, Yasser al-Youssef from the political office of the “Nureddin al-Zinki rebel group” told AFP news agency that "an agreement has been reached for the evacuation of the residents of Aleppo, civilians and fighters with their light weapons, from the besieged districts of east Aleppo. He said the deal was "sponsored by Russia and Turkey" and would be implemented "within hours."

According to Sana, the Syrian state-run media agency, at least 3,000 people had been evacuated to government-run residence centres on Tuesday. It also claimed that 375 rebels had laid down their arms and surrendered themselves to government forces as part of an amnesty agreement. “The withdrawal is supposed to be carried out with the help of the International Committee of the Red Cross (ICRC) via a special corridor,” the agency stated.

The ceasefire and evacuation plans seem to be back on at the time of writing on Thursday, after they fell through on Wednesday. Reuters news agency quoted one Syrian official source on Thursday morning as saying that the "operation to organise the departure of gunmen from eastern Aleppo has now started".

Hezbollah’s media unit said there had been "big complications" but that "intensive contacts between the responsible parties... led to re-consolidating a ceasefire to exit armed fighters from eastern districts in the next few hours".

Russian media corroborated this, saying that Russian soldiers would lead the rebels out towards Idlib city on buses and ambulances. Russian Centre for the Reconciliation of Opposing Sides in Syria said Syrian authorities had guaranteed the safety of all members of the armed groups who decided to leave Aleppo.

Meanwhile, the two sides in the conflict -- the government supported by Russia and Iran, and the rebels backed by the US-led western coalition -- have sought to absolve themselves of responsibility, and keep passing on the blame to the opposing side.

While Power slammed Syrian allies Russia and Iran, the latter two have consistently highlighted America’s role in the crisis, specifically the funding of rebel groups. In an interview with RT, Syrian President Assad warned against taking statements by western governments at face value, saying that in Aleppo, they seemed to care more about saving terrorists than civilians. He also slammed the lackluster reaction to ISIS’s onslaught on Palmyra.

In response to a question about the absence of western attention on Palmyra, which has been taken over by the Islamic State, Assad said, “Exactly, because if it was captured by the government they would be worrying about the heritage. If we liberate Aleppo from the terrorists, the western officials and the mainstream media, they are going to be worrying about the civilians. They do not worry when the opposite happens, when the terrorists are killing those civilians or attacking Palmyra and destroying the human heritage, not only the Syrian heritage.”

It’s always important in politics to read between the lines, not to be literal. It doesn’t matter what they ask. The translation of their statement is for Russia [to] “please, stop the advancement of the Syrian Army against the terrorists.” That is the meaning of their statement, forget about the rest: “You went too far in defeating the terrorists, that shouldn’t happen. You should tell the Syrians to stop this. We have to keep the terrorists and to save them,”” Assad added.

As the resistance movement of the rebel forces is pushed closer to the end, with Syrian president Assad taking control over the eastern part of Aleppo city with the help of Russian coalition forces and regional Shiite militia groups, many civilians and activists groups -- mainly supporters of the rebel forces in Aleppo -- are now posting messages on social media that highlight their fear about being killed or captured by government forces. These messages have gone viral on social media over the last few days, representing one side to the complex battlefield of Aleppo.

Here are some of those messages posted on social media: 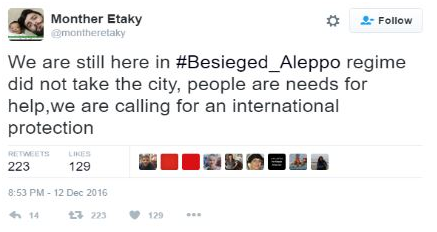 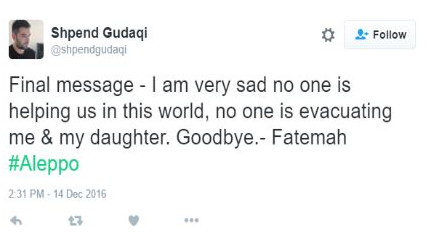 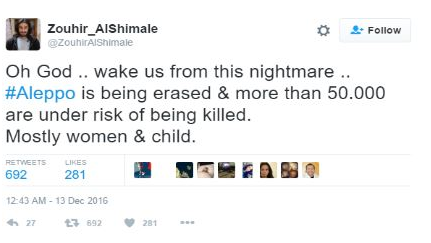 Perhaps my final message from E. Aleppo. Regime forces are closing in and bunker busters are raining down. pic.twitter.com/XgK0DSa08x


(Cover Photo: This Image was posted by human rights watch on Twitter)