NEW DELHI: The Islamic State came to acquire international prominence because of its advance into Iraq, with the militants having captured the important cities of Mosul, Tikrit and Tal Afar. United States President Barack Obama outlined a strategy of airstrikes against the militants, who are currently waging a battle in Iraq’s Anbar province, having advanced as far as Abu Ghraib, a town that is effectively a suburb of Baghdad.

Although the US maintains that it is "also focused on the fighting that is taking place in Iraq's Anbar province,” the battle for the Turkish-Syrian border town of Kobane is clearly the focus of the US campaign.

This infographic in the Washington Post shows the raw numbers of airstrikes in both Iraq and Syria since September 23, the day the US started bombing Syria. 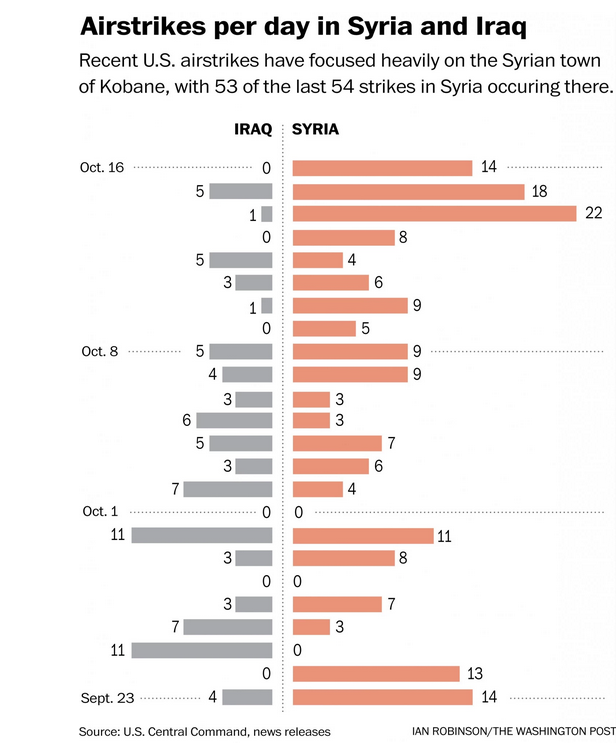 The US-led coalition maintains that the airstrikes in Kobane have helped Kurdish fighters push back the Islamic State, however, "the security situation on the ground in Kobane remains tenuous," the US defence department said in a statement on Thursday.

Further, the BBC reported that Syrian fighters backed by the US have indicated that the US-led coalition faces a backlash in Syria owing to its bombing campaign. Reports of civilian deaths resulting from airstrikes have brought people out on the streets in protest. 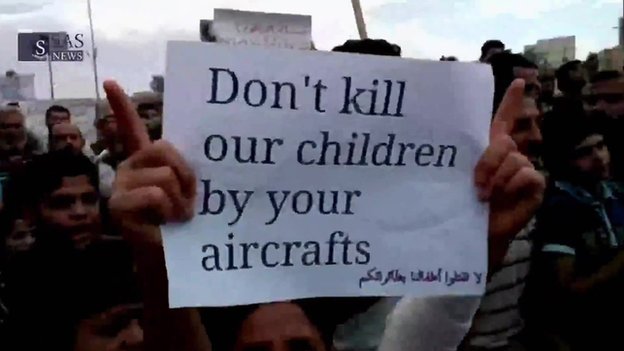 Whilst the US maintains that no civilians have been killed, reports from the ground differ. Earlier in September, a video emerged that showed residents walking through their destroyed homes following a US airstrike, with the narrator of the video being heard saying, ‘“mass destruction of the civilian homes as a result of the strikes of the Western alliance on the civilians in the western Idlib suburbs… Look, it is all civilian homes.”

The Syrian Observatory for Human Rights has reported civilian casualties on several occasions. AP quoted the organisation’s director, Rami Abdurrahman, on the casualties of a US airstrike a few weeks ago, saying, “They killed only civilians there, workers at the site. There was no ISIS inside.” The comment had referred to a strike that hit grain silos in the northern Syrian town of Manbij, which, as Reuters reported, may have been mistaken for an Islamic State base.

In another incident, on September 23 when the US first bombed Syria, at least seven civilians, including five children, were killed in the village of Kafr Deryan in northern Idlib province. "Witness accounts suggest that the attack on the village harmed civilians but did not strike a military target, violating the laws of war by failing to discriminate between combatants and civilians, or that it unlawfully caused civilian loss disproportionate to the expected military advantage," Human Rights Watch had said in a statement.

In fact, at the end of September, the White House acknowledged that the strict standards President Obama imposed last year to prevent civilian deaths from US drone strikes will not apply to US operations in Syria and Iraq.

As The Citizen previously reported, Islamic State militants have continued their advance in Syria and Iraq, despite the US stepping up airstrikes. That fact, along with the alienating impact of airstrikes, should be a cause for concern as the international community continues to grapple with the advance of the Islamic State.