"I draw for Gaza"

Haneen Ibrahim Nofal posted a striking image on the Internet while Israel was bombing her native Gaza in July. The drawing depicted a young woman wearing a kufiyyeh — the Palestinian checkered scarf — on her head and smiling proudly while touching a crown.

The crown was in the shape of the Arabic word for “resistance,”muqawama.

The timing was potent and, despite the horrors then befalling Gaza, offered some hope. The drawing had the air of challenge and resilience. It also recalled the Arabic phrase, in which you can describe someone as “the crown of my head” — meaning that you honor and respect them. Nofah, 23, used that phrase in accompanying messages.

I learned about Nofal when one of my friends who belongs to the same English literature class as her in the Islamic University of Gaza told me about her artwork. “She’s brilliant,” my friend said eagerly.

I looked at Nofal’s Facebook page and I was immediately fascinated by how much her drawings spoke to me. I liked every character and every story she drew. 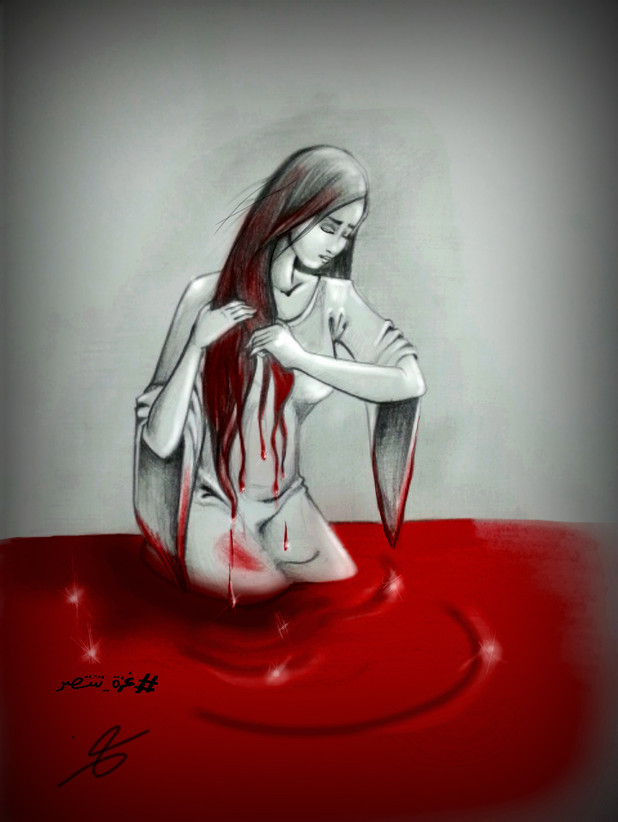 During the latest Israeli offensive against Gaza, her drawings also spoke to what was going on in my mind and probably the minds of everyone in Gaza. Although mainly female, her characters embraced the resistance at times with proud, defiant postures, and at other times with bent, tired and injured bodies.

That pride, defiance, exhaustion and injury were everything others and I felt during Israel’s onslaught, in addition to the prevalent anxiety and fear.

I recently had a Skype conversation with Nofal about her work.

Rawan Yaghi: When did you start drawing?

Haneen Nofal: Since I was in kindergarten. My mother used to make me busy with drawing while she did the housework.

RY: Is drawing a hobby for you, or do you consider it as a profession?

HN: It started as a hobby then I developed it into a profession. I started to make a living from it in 2011, but not in my field. [I draw] in the animation field.

RY: Is there something in particular that compels you to draw? 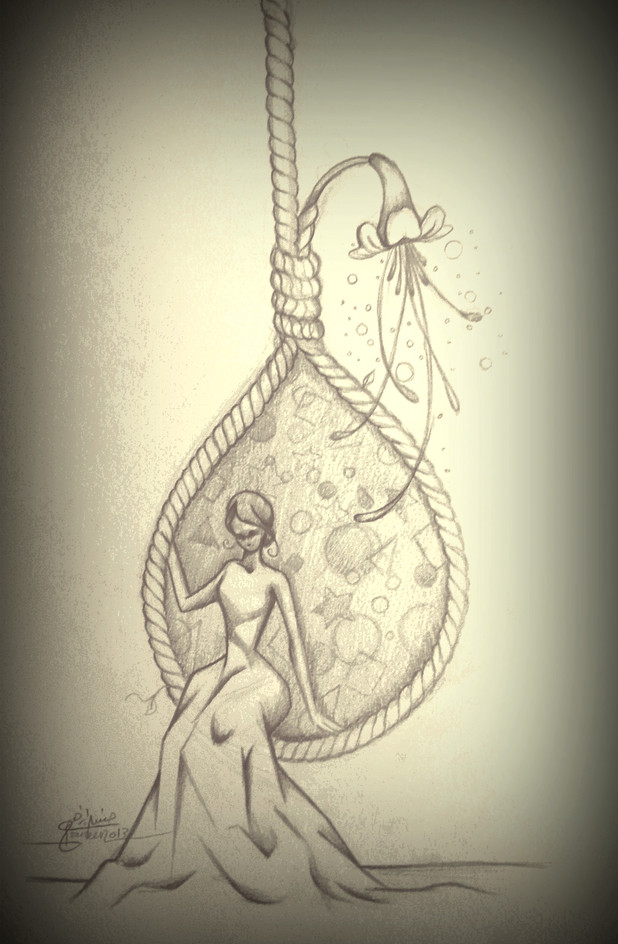 Most of Haneen Nofal’s drawings depict female characters, like this one done before the Gaza war.

HN: Well, it’s obvious. Because I’m a female, a woman, I should express myself and girls like me. So I do it using female characters.

RY: Are there other things in the environment or your surroundings that drawing helps you relate to or express?

HN: Lately, the war, the last war on Gaza affected my drawings very much. For a while, I couldn’t draw anything. I was afraid. I was afraid to think, even. I was so busy with my fear to think properly or draw. I needed something to express my fear with but not that direct thing. I had to create a character, called it Jafra. You saw her with the tiger.

This happened in the last days of the war — not at the beginning. I found a way to express my fear and get rid of it by drawing this girl. She depends on a tiger. She expresses herself to him, the tiger. But I didn’t continue the project because I was busy with exams. It was a way to express myself, to criticize the war.

Sometimes I created some drawings about Palestinian children who were attacked by the Israeli forces in the last war, especially the ones who were [killed] by the sea, the Bakr children … Sometimes I find that my drawings are very weak in front of the idea I’m trying to present. 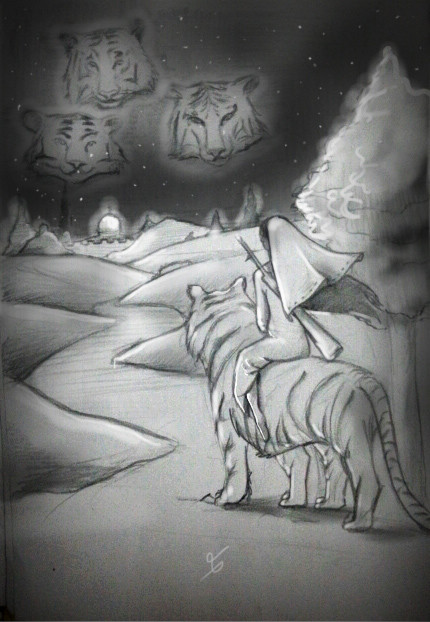 RY: You say you think your drawings are weak compared to the idea you’re trying to express. In one of your Facebook posts during the attacks, you mentioned or you expressed a state of mind that didn’t allow you to either write or draw. How can you describe that state and how did you manage to eventually break through it?

HN: I usually draw at night, but night turned into a beast in Gaza during war, because the attacks intensified during that time. And I couldn’t find myself, even at night, the time during which I love to draw. We were busy running in the house. We moved from our house to another house because it was threatened and I took with me a few papers and I drew some drawings but I couldn’t publish them because I had no electricity.

Even when I drew something, I couldn’t show it to others. I felt helpless. I couldn’t express myself properly. I couldn’t find the lines that express my fear. The fear was bigger than my ability to express it.

They were difficult days. I wasn’t just afraid. It was a mixture of feelings, fear and grief and sorrow for the situation. I lost hope in achieving the dream that I used to live for. I live for my drawings. I live for a dream to become a professional artist but during that time I lost hope in this dream.

I thought I was going to die before becoming the person I want to be. It was hopeless.

RY: Do you generally see Gaza as a place that allows you to grow artistically?

HN: I have never left Gaza. I love Gaza. It’s my inspiration, my cause. And my drawings will be for my cause, for Gaza, for Palestine. I draw for Gaza. I don’t think that my artistic skills could exist without Gaza. 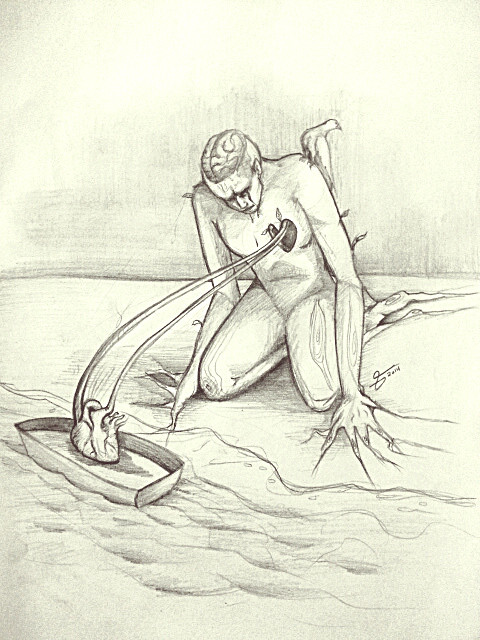 A drawing by Haneen Nofal from September.

RY: Can you tell us about your aesthetic influences?

HN: I love poetry. My last drawings were inspired by poems written about the last attacks on Gaza. I haven’t published them yet. When I read poetry I get very inspired. Sometimes some stories affect my drawing. My style comes spontaneously. I start drawing and the style develops with the style.

The idea influences the way I draw. The idea mostly comes from poetry. Sometimes I have an idea from society and I can’t express that thought except through drawing and that’s how the sketch comes.

RY: Can you tell us a bit about the mix of animated characters and traditional Palestinian symbolism?

HN: I usually don’t do it. I like it to be abstract. But I also use symbols. I want the viewer to find his or her own personal thought in the drawing. That character Jafra was a beautiful Palestinian girl who used to help the resistance. She was a heroine. She had the Palestinian beauty. It was an inspiration for me.

For example, when we get funds from abroad to make an animation project about Palestine, we are forced to remove things related to resistance so the sponsors would be happy about it. That’s wrong. I like animation and drawing because I feel it allows me to send a message about the lack of support to the resistance in this area.

Animation is widespread and accessible to everyone. Everyone likes it and everyone gets it. The sad part is when sponsors don’t want you to show a wholly Palestinian identity.

(Rawan Yaghi, a Palestinian from Gaza, is a second-year Italian and linguistics student at the University of Oxford. She blogs at WResist.wordpress.com.)