BENGALURU: At a time when democratic rights and processes are either being violated or suspended, the Concerned for Working Children (CWC), Bangalore, seems to be a ray hope at keeping them alive. CWC, nominated thrice for the Nobel peace prize between the years 2012 and 2014 is a Karnataka based organisation working on issues of decentralised governance and citizenship, child labour and migrant communities.

Nadana Reddy, founder, was a part of the Ramesh Kumar Committee which drafted the recommendations to landmark Karnataka Gram Swaraj and Panchayati Raj Act, passed in December 2015, a radically amended version of the previous act. The Bill ensures participation of all stakeholders in planning, implementation and monitoring of social, economic, cultural and environmental programmes at the district, state and central level. The bill decentralises governance systems and ensures democratic and equal participation of all stakeholders concerned. Reducing the powers of Legislative Assembly and Council; it enables the Gram Sabha to take decisions on local issues / needs, ranging from how funds should be spent to where a light pole needs to be erected.

It must also be noted that the 73rd and 74th Constitutional Amendments, also known as ‘a silent revolution’ mandates for the setting up on Panchayats which enjoy the status of institutions of self – governance. These amendments were made in order to ensure genuine and effective democratic decentralisation. 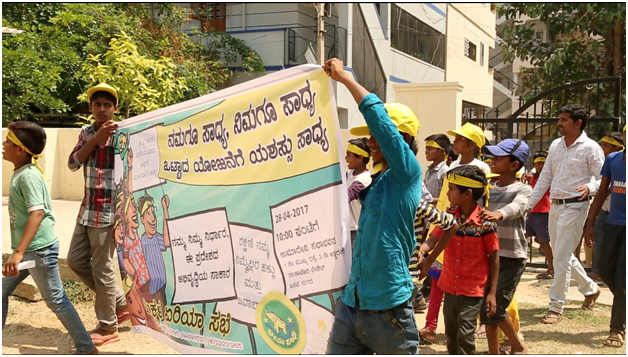 On 28th April, CWC organised a Makkala (Children’s) Area Sabha in which 50 representatives from the Bhima Sangha – South Asia’s first union of working children, presented their concerns with regard to basic facilities and child safety, to their local elected representatives - Mr S.G.Nagaraj (corporator of ward no. 81), Mr. Krishnappa (ward president ) and officials from other departments of their area. Members from the concerned communities as well as representatives from other organisations such as Action Aid and BOSCO were also in attendance.

Mr. Damodar Acharya, Executive director of CWC, in his opening note spoke of the first Children’s Grama Sabha held in Kundapur Taluk, Karnataka in the year 2002, facilitated by CWC, which provided a platform for children to raise their issues and hold the local government accountable. He also pointed out that the Gram Swaraj and Panchayat Raj Act of Karnataka mandates for special Gram Sabhas to be held for marginalized communities such as women and children.

Biplaw Singh, Urban Program co-ordinator of CWC, highlighted the importance of children’s participation in democratic process and urged for people’s representatives and officials of various departments to hold similar Area Sabhas with the children of other areas. 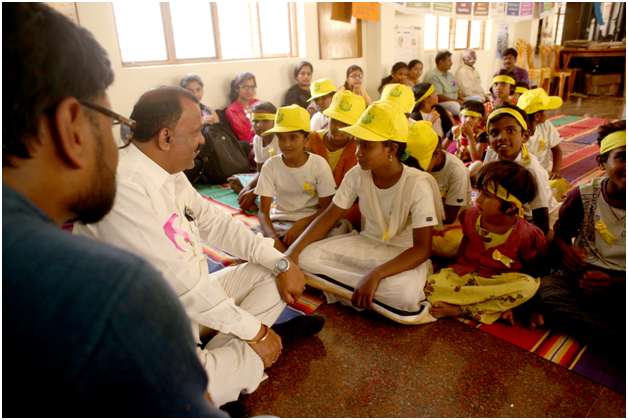 The children present had identified the issues presented by them, by using tools such as ‘danger zone mapping’ - a participatory tool to identify areas prone to danger, and presented it to the gathering. They also described the chronological process of identification of issues through the footsteps tool. At the beginning of the presentation, the children mentioned that they had been inspired by the Children’s Area Sabha conducted in 2015 at Kacharakanahalli ward, Bangalore.

Members of Bhima Sangha are mostly from migrant communities, living in blue tent settlements, and engaged as daily wage workers for employment. Many of the children from these communities work alongside going to school or during their vacations in order to supplement their family income. Mr. Nagaraj – the corporator in his address to the children highlighted that communities are forced to migrate to the city due to the severe drought in the state.

The children emphatically highlighted the issues such as non-availability of potable water and sanitation facilities. In the memorandum of demands submitted by the children to the corporator, they highlighted irregularity in availability of water, and lack of basic sanitation facilities. They also mentioned in the same document, that the space they hitherto used for defecation had been cleared for construction of an apartment. Children also highlighted that residents of the area suffered from health issues due to the presence of the drainage flowing beside the community.

CWC through its work over the years has been actively involved in initiating dialogue and engagement between vulnerable communities who’s voice often go unheard and local representative in order to ensure fair representation, build support structures and nurture more inclusivity.

India fares very poorly on the global child rights index and as Mr. Damodar Acharaya rightly mentioned – children since Independence have never been provided with the opportunity to voice their concerns and demands; further emphasising the need to ‘listen to children.’

Following the presentation by members of the Bhima Sangha and their dialogue with the local corporator; Mr. Nagaraj ensured the children that in the first week of May he shall hold an on the spot inspection with members of all concerned departments, following which an action plan shall be drawn.

Shenaz Begum, representative of the Bhima Sangha in conversation with The Citizen expressed her happiness about her participation in the various processes. On what she learnt from the process, Shenaz explained about how the various processes had helped her understand that ‘children too have rights, which they must exercise.’

Efforts such as CWC’s Makkala Area Sabha become even more important at a time when democracy is under threat and people’s voices are being silenced. It also goes on to prove that decentralised governance is possible and effective in bridging the gap between citizens and their elected representatives, leading to valuable dialogue and engagement.

Such initiatives must set precedence and be replicated in states across the country and not just Karnataka, in order to ensure better governance, equal opportunities for participation and representation, and to make certain that even the voices of the most marginalised are heard. A model such as this Area Sabha would prove more effective in India which has such a dense and diverse population facing an excess of challenges, social injustice and inequity.

Such initiatives also act a stepping stones for building a people’s movement in the country, where the elected representatives are truly ‘for the people, with the people and by the people.’