Women Menstruate, Get Used To It!

In India, ‘menstruation’ is a word which cannot be spoken without people being embarrassed and having disgusted look on their face. This natural process is considered “shameful” and “dirty”. Menstruation is a natural phenomenon to girls and women. It is a part of the female reproductive cycle in which the body sheds the lining of the uterus through vagina. It is a natural process that happens to every girl between the age of 11-15 years and marks the onset of puberty among them.

But it has always been surrounded by secrecy and illogical myths and beliefs. People prefer not to talk about it and keep it hidden. According to Hinduism, menstrual women are considered ritually “impure” and “polluted”.

Women who are on their period are isolated and confined to one room, away sunlight and from their family members. They are not allowed to conduct religious activities and other household chores. In most of the rural areas of India, women are not supposed to “enter the kitchen and cook” for the length of their period. It is believed that food cooked by menstrual women would be “contaminated and unhealthy”.

In other communities, women are kept with cows for the days when they are menstruating. As absurd as these beliefs sound, they are true and are followed by the majority of people in India. This behavior of disgust towards women makes them inferior in this patriarchal world. 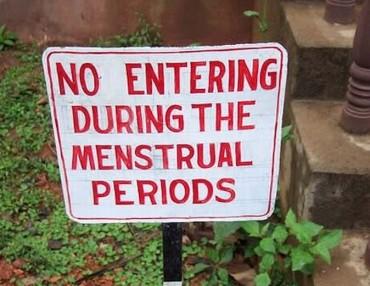 When it comes to statistics, according to the National Center of Biotechnology Information (NCBI), there are over 77% of girls and women in India, using an old cloth, which is often reused further. Around 88% of women in India sometimes turn to using ashes, old newspapers, dried leaves and husk sand to help in the absorption. Over 23% of girls in many less economically developed countries drop out of school when they start menstruating.

In 2016, a study done by Tata Institutes of Social Sciences (TISS) revealed some shocking statistics about the discrimination Indian girls have to face during their menstrual cycles. Eight out of every 10 Indian girls are not allowed to enter religious shrines when they are on period. Six of 10 girls are not allowed to touch food in the kitchen, and three of 10 are asked to sleep in separate rooms (the study used data about 97,070 girls collected by 138 earlier studies on menstrual practices in India, between 2000 and 2015).

Kamla Bhasin, a famous Indian development feminist activist, in an interview with The Citizen talked about the deep ingrained patriarchal mentality of people in India by saying “Menstrual taboo shows that women are considered impure, inferior and dirty for few days for a month. It is the blood from which all human beings are born. It shows patriarchal society that thinks that men are superior and should be given more privileges.”

This stigma against menstruation takes a toll on many girls’ health, emotional state and mental state. In India, people are not educated about topics like sex, genital diseases, reproduction health etc. Parents don’t like to have “the talk” with their children when they reach the appropriate age because they are too embarrassed and awkward to discuss it. Even in educational institutes, teachers avoid to discuss these topics in length, leaving kids with incomplete knowledge about how to handle changes once they reach puberty.

Thus, there is an extreme need for proper education given to people about reproductive health so that women don’t have to feel ashamed about something as natural as menstrual blood. People should feel normal about discussing these kinds of natural things. This can also lead to the end of the senseless restrictions that are put by the society on women. India, which takes immense pride in its cultures, traditions and beliefs, needs to overcome this taboo and accept this as pure, natural process and stop feeling ashamed about it.