Meo Girls in Rajasthan Give Wing To Dreams

Meo Girls in Rajasthan Give Wing To Dreams

THEKRA, RAJASTHAN: Thekra in Rajasthan has a predominance of Meo Muslims who are believed to have settled in the village 240 years ago. Girls of Thekra have broken taboos and gender biases, and compelled their illiterate parents to enroll them in school.

Literacy among Meo children, especially girls, has been dismally low. Initiatives by a few villagers and constant awareness drives by the functionaries of a local NGO have helped in creating an enabling environment for the girls to study, curbing dropouts and preventing them from other discriminations. Female literacy of Thekra, which was 39% as per the 2011 Census, has risen to 60%.

The village in the Mewat region of Alwar district has a population of over 2,000, where Meo Muslims live amicably with Dalits, who comprise 10% of the population. Nestled in the semi-arid zone of Rajasthan where groundwater level has dropped down to 1,500 ft, villagers grow onion, bajra, mustard and gram. Apart from farming, the villagers are into cattle-rearing.

According to Fakhruddin, a resident, the majority of the boys in the village were busy grazing cattle or taking care of their siblings, shunning studies. “Till 2003, children of our village had to walk a kilometer and cross the railway track to go to school,” 53-year-old Ali Sher told VillageSquare.in.“Two boys of a family died in an accident while crossing the track. Then boys of our village dropped out of school as their parents were scared to send them to the school.” The literacy status started to change in 2004, when Matsya Mewat Shiksha Evam Vikas Sansthan (MMSVS), a local NGO, persuaded the villagers to open a school.

“The changes that you see today have been possible due to MMSVS. When they started their work, nobody believed them,” recalls Fakhruddin. “Maulana Hanif helped in developing a congenial environment.” Maulana Hanif, a progressive cleric and president of MMSVS, agrees that there was a lot of resistance initially. He and his functionaries persisted without losing hope.

“I told the villagers that along with dini talim (religious education), children need buniyadi talim (basic education) and duniyavi talim (formal education) also. It struck a positive chord,” Maulana Hanif said.While villagers like Ali Sher, Fakhruddin and Ali Mohammad supported the initiative, many opposed it. But gradually they too started supportive, after seeing the results.

Ali Sher provided a room and a veranda to open Dr Ved Kumari Smriti Vidyalaya. Illiterate but articulate, he said, “I was convinced as their focus was more on education of girl children. My eldest daughter, Imrana was among the first batch of learners.” When boys started coming to the school, the shift was planned in such a manner that they did not miss the responsibility of grazing their cattle.

The teachers went on a door-to-door campaign. Then girls also started coming. Boys were charged Rs 20 as monthly fee and girls Rs 10. Now girls in the school outnumber boys. The impact of the school being evident, Ali Sher donated 6 biswa (49.17 acre) of land to MMSVS in 2006, to construct a building for the school.

Education has played a big role in the lives of women of Thekra. “The school has changed the lives of many of the girls in our village,” said Ali Sher. 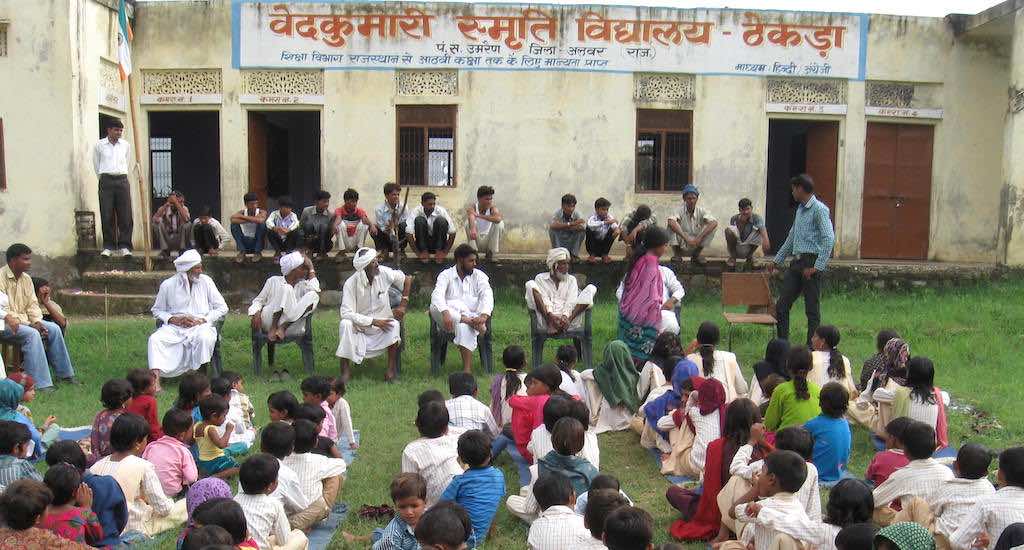 The local school in Thekra village has led to a considerable increase in female literacy. (Photo by Tarun Kanti Bose)

“I have always encouraged my daughters to study and build their careers. My husband, a peddler selling clothes never interfered,” says 55-year-old Mishri. However, her sons objected to schooling the girls. When Mishri failed to convince them, she snapped all ties with her sons. Such is Mishri’s conviction about educating girls. “Not only did I get my daughters educated but I got my granddaughters admitted in the village school,” she said with pride.

Acknowledging Mishri’s role, her 22-year-old daughter Alvida said, “My ammi has been a pillar of strength. We are four girls. Ammi has always encouraged us to study and carve a niche for ourselves.” After completing her graduation, she is doing B. Ed. Her older sister 24-year-old Akhtari acknowledges that it was her education that came to her help in her hour of desperation. “When my husband deserted me I could be independent. Since I had completed class 12, I could get a job in Swachh Bharat Mission and earn my livelihood,” she said

Vakila was married after she passed class 10 board exams, to a boy much younger and who had studied only up to sixth standard. She rejected her marriage and refused to go to her parents-in-law’s house. She continued her studies and now she is a teacher who is financially independent.

The first batch of learners as well as the successive batches has shown their mettle in different fields. Warisha, who was among the first batch of learners, was selected by Terres Des Hommes, a children’s rights organization, to represent India at the World Social Forum in 2007 at Nairobi. But unfortunately, Warisha could not go since she did not have a passport.

Ali Sher recounts the patience with which the teachers handle children, instilling confidence in them. His eldest daughter, one of the first batch of students of the school, passed class 8 in the village. When the government school refused to enroll her, she took the exam and cleared the board exam with good marks.

The school has not only helped girl children but even women who had dropped out of school due to early marriage, as in the case of 30-year-old Farmina, who passed class 8 in 2012 under the bridge course. “Seeing my commitment towards studies, my husband Fakhruddin enrolled me in the center run by MMSVS. My husband, though illiterate has always been supportive,” Farmina said.

Undeterred by taunts and derogatory remarks of her extended family, she studied and passed class 8 board exams and plans to appear for class 10board exams too. Besides supporting her, her husband motivates villagers to send their daughters to school. “After passing class 8, my confidence level has increased. I contested the panchayat elections and I became chairperson of the panchayat samiti,” she said with pride.

Ali Sher’s younger daughter Shabana, studying class 11 at SMD Government Girls’ School, Alwar credits her schooling at Ved Kumar Smriti Vidyalaya for her high marks in class 10 exams. She stays in a hostel. She has taken science stream as she aspires to be a doctor. “Though it’s difficult to crack the medical entrance exams, if I’m able to, I can serve my community, which has not produced any doctor,” she said.

In a conservative milieu, where girls were confined within the walls of the house, now they move freely and travel to Alwar, Jaipur and other cities for studies. Meo girls have started working in Gurgaon, Delhi and Bangalore. But the most important outcome of educating Meo Muslim children is ending child marriages in the village.

The awakening brought among the Meo Muslims has produced desirable results but to make it sustainable it needs support from the Government too, which seems to be passing on its responsibilities to private players.