Why I Reject The Triple Talaq Bill

What prompted me to write this piece is this picture. This picture is doing rounds on the social media and is being celebrated by overnight sympathisers for the Muslim cause. People who haven’t uttered a word of condemnation to the killings of Akhlaq, Junaid or Afrazul, but on the contrary have shown covert support to the culprits. Suddenly, with the passage of The Muslim Women (Protection of Rights on Marriage) Bill 2017 or The Triple Talaq Bill as more commonly known; a select few have suddenly become crusaders for the beleaguered Muslim women. 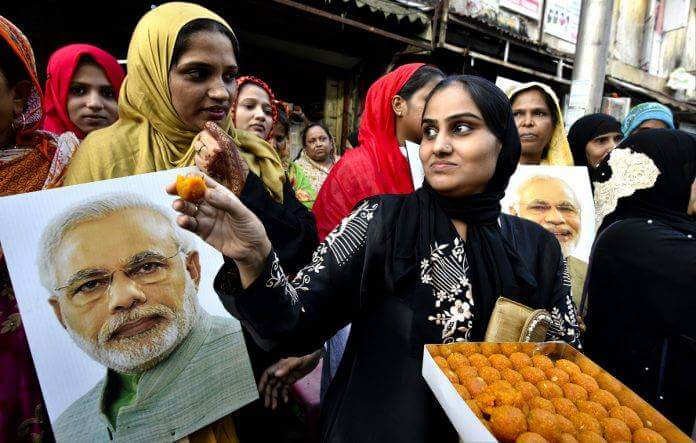 I, as a Muslim woman and as a citizen of this country reject this flawed bill. I find this picture laughable and worrisome at the same time. It’s laughable because firstly, those who are hailing our Prime Minister for upholding the rights of Muslim women should be reminded that it’s the Supreme Court that banned instant triple talaq. The Executive and the Judiciary are independent of each other. Secondly, it wasn’t the worried cries of Mr. Modi in his haranguing speeches that the apex court quoted to ban instant triple talaq or talaq-e-biddat, but the Supreme Court quoted the Quran, clearly saying that such a practice nowhere finds place in the Quran and is totally un-Islamic. So while I’ve got my reasons to laugh at this picture with the Prime Minister’s poster being offered sweets by some Muslim women, I’m more concerned as a Muslim woman myself.

No doubt, instant triple talaq should be banned but the provisions of the above stated bill do more harm than help. It’s already been pointed out that putting the man behind bars for 3 years is absurd if the instant triple talaq is null and void and the marriage subsists as who would fend for the family when the breadwinner is languishing in jail. Since, it’s now a cognisable offence, anyone and not necessarily the woman in question can complain against the man. At a time when a particular community is already a target of lynchings and is living in constant fear, this provision will play into the hands of communal bigots more, than helping the Muslim women. Also, anyone who wants to create a rift between the couple or would benefit from the split, would be able to do so on a simple complaint.

The overnight sympathisers as well as those who are not able to see the flaws of this Bill, want me to support it ‘in-principle’, in the hope that someone in the near future would challenge the flaws in the court and the court would then consider reading it down. This is nothing but ridiculous and unacceptable. We know that it took more than a decade, 15 years to be precise for a Constitution Bench of the Supreme Court to correctly interpret the hurriedly passed 1985 (after the Shah Bano judgment). And even though section 498A of IPC is commendable, it’s gravely misused too in many instances to target men.

The Triple Talaq Bill is to be opposed at this very stage. While most political parties have shown solidarity with it, in disregard of its flawed provisions; it’s time for the civil society as well as every citizen to speak up and oppose it vehemently in its present form.

And to those who’ve been telling me that only victims and suffers can comment and not me or anyone else, I just want to ask that do farmers themselves frame agricultural policies? Do civilians themselves frame laws and not lawmakers? While the overnight sympathisers can take their own sweet time to answer my questions; I fervently urge one and all to oppose this Bill which has undertones of mischief and malice towards Muslim men.