The Sky Is Ours

‘My life is different from my mother’s’

Laxmi, a Dalit girl in Lucknow was able to change her destiny precisely because she was lucky enough to go to school. She had worked as domestic help since she was seven years old, earning about Rs 1000 per month. Her father is an alcoholic and her mother died of tuberculosis. She has four younger siblings.

Born in 1992 in an abandoned room on a construction site, she was 11 years old when she realized that she could educate herself.

A year before the death of her mother she discovered Prerna, a privately funded high school for girls from impoverished families. The fee was Rs 10 per month for afternoon classes. Laxmi could afford that amount. She would finish cleaning and cooking in other people’s home in the morning, study till 17.30 hours and return to work in the evening. That is how the formal education of Laxmi started.

She is a graduate now and head of sales at a call center, providing services to banks and bringing home a salary of Rs 25,000 per month. Her younger sisters study at Prerna. 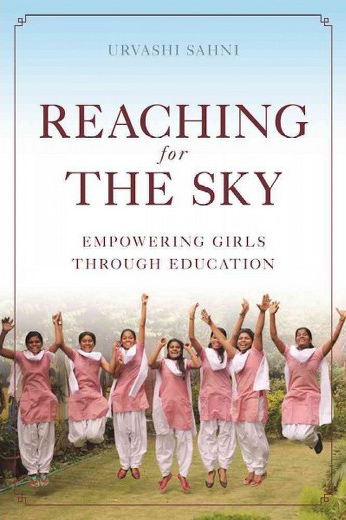 Reaching for the Sky is the story of Prerna and the importance of education in bringing about gender equality in a patriarchal society.

Now if wishes were horses then women’s education, health and safety would ride on top of the list of all development activities.

At the moment the wish unfortunately remains just that, a wish! This is despite the fact that unlike Laxmi, a majority of women in the country are still uneducated, and not safe even in their own home.

Founded in 2003 by Lucknow based educationist Urvashi Sahni, Prerna helps girls like Laxmi to address the multiple challenges of patriarchal society and to fight out gender discrimination inbuilt in its very nature.

In the book the 25 year-old Laxmi is quoted as saying:

My life is different from my mother’s. I have controlled my life a lot, taken care of myself, wasn’t married. I might even go to Chennai for a job.

Apart from Laxmi, there are stories of other girls as well who have benefitted from Prerna. Though the stories are different in their details but they are all similar in the structural violence faced by girls, and their families as the reality is embedded in age-old practices of caste, poverty and patriarchy. Aarti, Sunita, Khushboo, Preeti and Kunti are all impacted by patriarchal misogyny, like millions of girls in India and elsewhere.

The atmosphere in Aarti’s home was always grim.

Her father was often drunk and at times he would pin his wife to the wall holding her neck.

Mother would not say anything. We were so small; we didn’t know what to do. When we heard his voice we would hide under the bed. We were so scared of him.

But education has changed the life of Aarti, 26.

First, the fear is gone. I think I am really smart. I think I can face any problem in the future. I can’t stay silent if I feel something is wrong. I want to learn and to grow. I can’t stay home now and do nothing. I want a career, a government job. I am preparing for that…like my teachers used to say girls should have an identity of their own, not only be someone’s wife, daughter, or sister. So I learnt to think like that about myself.

Prerna has transformed the lives of over 5,000 girls and their families so far. It is located in Lucknow, the capital city of Uttar Pradesh (UP) the most populous state of India. Here literacy rates are lowest in the country.

Prerna is an inspiring initiative in a state where most statistics are heartbreaking. Out of a population of nearly 200 million people, more than 60 million live below the poverty line in UP. The state has a gender ratio of 908 females per 1000 males with the female death rate for the age group zero to four years exceeding the male death rate by 22 percent.

At Prerna the girls are taught to critically examine their lives as woven in patriarchal structures and to find ways of resisting discrimination. The most important lesson given here is to help girls to recognize themselves as equal autonomous persons deserving respect and having the right to live lives of their own choosing. The challenge at Prerna remains on life outcomes and not just on learning or examination outcomes.

Says Kunti, a Prerna alumnae and MBA graduate born in 1992 into a poverty stricken Dalit family:

Father thinks that we have started talking back to him because of our education in Prerna. I think that he is sorry that he has lost his superior status at home. Now I say what I think even if it is in opposition to what he thinks.

Sahni is also founder of Study Hall Educational Foundation (SHEF) a chain of schools in Lucknow. She regrets that those in power seem to have more important issues to deal with than the safety and learning of girls. Sahni is happy that a billion rupees is allocated for the ongoing Beti Bachao Beti Padhao campaign in an effort to create awareness regarding the safety and education of girls. The intention is good, however not when twice that amount is proposed for one statue of a favourite politician.

Such choices made by the government dwarf the importance of the safety and education of women in a country where girls’ education faces a sense of urgency.

In 2013 a boy’s school was started to develop gender equality consciousness, amongst the male population in society.

Come to think of it Sahni’s Reaching for the Sky is more than a book. It is a comprehensive action plan on girls’ education as wanted by the girls themselves.

The question is if policy makers in the country will ever pick up a copy of this enlightening documentation, or not?

Reaching for the Sky by Urvashi Sahni is published by Brookings Institution Press, Washington DC; 2017.