New Social Movement to Save Handloom

In late September, young women from the small village of Heggodu, Karnataka joined a padyatre that ended in Arsikere in Hassan district, fighting the inclusion of handloom and handicrafts under the Goods and Services Tax. Workers from different states, environmental activists, and unusually, even consumers came together in what they call the Tax Denial Satyagraha. The padyatre was one among the many protest demonstrations that the community of rural artisans and consumers have put forth to the state and central governments ever since the announcement of the GST rates.

Great contradictions between the government’s pompous projections and their policy implications can be found even without looking closely. While the talk is big on ‘Made in India’, there has been no change in how small producers across sectors receive minimal support. In fact, before the revisions recommended by the GST Council in November 2017, the rise in prices would adversely affect handloom producers.

Susheela who has worked for over two decades in Charaka Women’s Multipurpose Cooperative Society based in Sagara Taluk, Karnataka, speaks about the cost of production that was predicted by the cooperative. “From about 2 lakh rupees that we used to invest every year earlier, we would have to invest 5 lakh annually,” she explains. “And when compared to large scale powerloom production, what chance do we stand when the prices of the products sore up?” she asks. 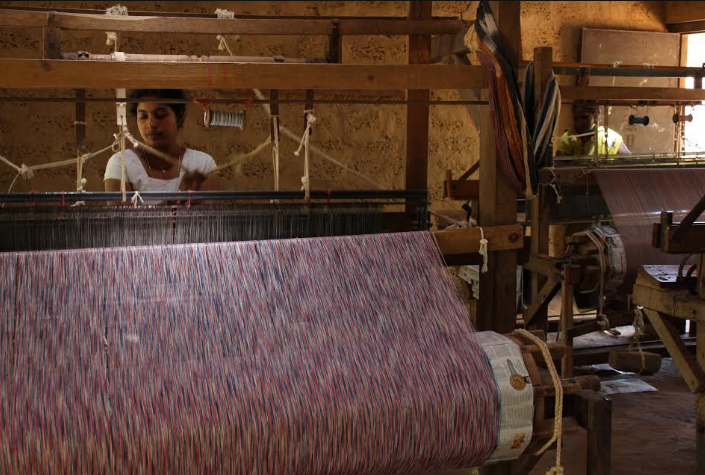 Since mid 2017, one of the founders of Charaka and prominent theatre practitioner Prasanna, along with the Grama Seva Sangha (GSS), a group constituting mainly urban consumers, are leading the Tax-Denial Satyagraha. At the Arsikere protest the workers of the Charaka Cooperative Society sold their handloom products, publicising that the sales would take place without imposing GST on customers.

“We made 25,000 rupees worth of sales without GST that day and Prasanna sir was arrested,” shares Soumya, one of the participants at the rally and a worker at one of the Charaka units in Sagara. “The larger movement is on-going. The demand is that all handmade, organic items like baskets, pots, handloom cloth should be exempted from GST,” she says. In the wake of the newest changes brought in by the GST Council, 29 handicrafts items are put in the 0% tax slab, perhaps a great milestone for the movement.

Abhilash C.A., Convener, GSS, shares the beginnings of the group, how it was founded to mobilize members of different sectors on to one platform. The group set out to find ways to bridge the gap between people behind the constructive work at the rural end and the urban consumers. “The GST is only a current matter we are addressing to take our main objective forward. It’s a political issue to come together to raise economic concerns,” he says. 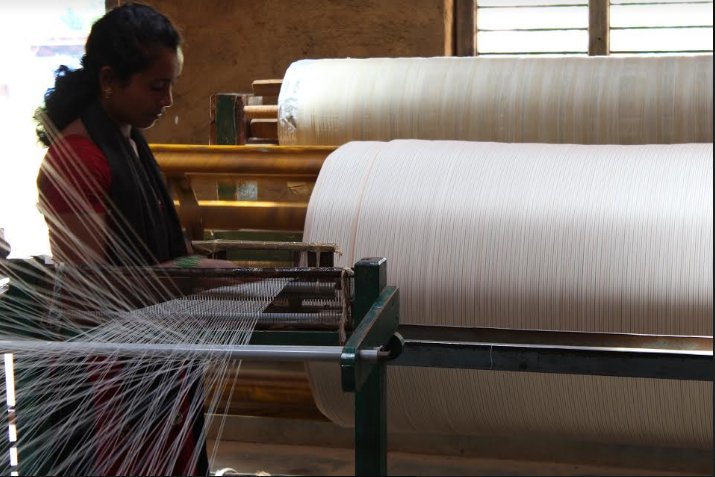 Social movements have long been seeing different groups of people with diverse backgrounds coming together for a common cause. This New Social Movement to save handloom is witnessing rural working and middle classes and urban middle class citizens working in different capacities if not equal ones. The workers groups not only constitute communities from across the state of Karnataka whose caste occupation is weaving, but also women for whom the skill of weaving is an alternative, full time wage possibility. These women, shareholders in the Charaka cooperative society, have been participating in rallies and national conventions for years to draw the attention of the larger citizenry on how handloom can be a sustainable model of production.

Although initially trained under an old employment scheme by the Textiles Department, the women in the villages of Sagara Taluk had been working on personal looms in their own houses, making negligible or no profit, with the government functioning as both supplier of yarn and lone buyer of woven fabric. What the founders of Charaka and a few women from the village managed to do was organise the women into one workforce, gradually into a cooperative.

The garments tailored at Charaka from the cloth that is woven in various units across the state of Karnataka, are sold under the brand ‘Desi’. The nominal rates of the clothes and the nature of minimal marketing are in contrast with big handloom brands across the country that have a market both online and offline. These big sellers, the centres of the handloom universe, tend to frame for the consumer the identity of the invisible worker who is perhaps at the margins of the same universe. 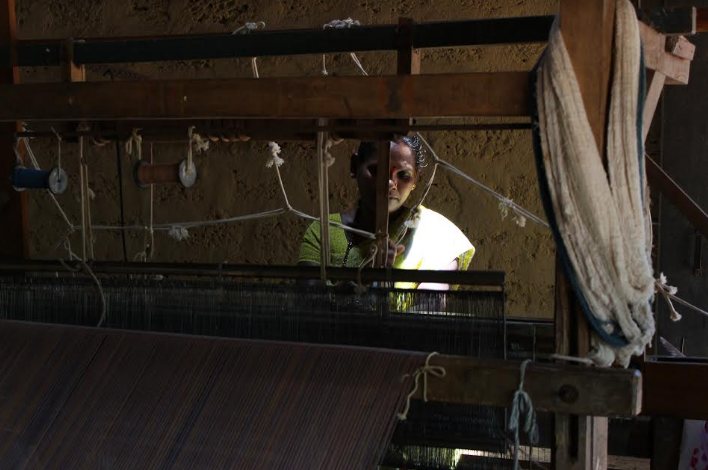 At Charaka, the women are in consistent interaction with urban consumers as visits to the units are common. “It builds our confidence when people from cities want to come here and learn how we make the clothes everyone wears, we can explain to anyone… even if we don’t speak each other’s language,” says Kavita, who works in the tailoring section.

Class distinctness or the consciousness of it certainly does not go away with these interactions. But they function as a kind of feedback mode. They also ensure that the workers are not completely alienated from the produce and their own market. In most households, gaining employment in the processing units within the villages is a sign of pride. A chance for upward economic mobility through a job which does not require migrating to nearby towns or cities.

Many young women working in Charaka speak of financial independence of a kind other interventions seem to have been unable to create. Revati who is part of the quilt making unit at Charaka believes that Self Help Groups (SHGs) are simply traps and no longer provide training or assistance for skill development. “My mother has been part of a SHG but I don’t want to be a member of such sanghas. We may just get stuck in a cycle of debt,” she says.

Where SHGs have failed to stabilize women’s finances, an assured monthly salary has made approaching private banks a preferred option for young women in the region. This kind of basic access to credit is an important outcome of the interventions by Charaka and a number of similar ventures that have taken birth after it. Such cooperatives seem imperative, given the vulnerable condition of labourers in the larger context of a neoliberal economy. But instead of the necessary encouragement by the state in material terms, the GST affects private cooperatives with annual turnovers of more than 20 lakhs rupees, implying that only unorganised artisans are exempt from GST.

Even as PM Modi, in his widely heard Mann Ki Baat, spoke of the unprecedented growth in Khadi sales during the 2017 Diwali, the picture is quite the contrary for private sector handloom producers. In fact, they experience a setback as government bodies, on the indications of the PMO, place orders with public sector entities alone. Many manufacturers of handloom fabric, shawls, sarees, continue to remain in the unorganised sector, away from the possibility of such bulk orders that can help improve situations. The demands by GSS for policy change are posed in this context: to raise the cap to 50 lakh rupees for all producers and to exempt rural federations and cooperatives entirely from GST.

Systems such as Charaka are emblematic of entrepreneurship, indeed of a new form of labour organisation. However, here lies the danger of tying handloom with tradition and culture. As distanced urbanites, saving handloom might well be an act of empathy towards livelihoods. But it would never fall upon the urban activist to carry on a labour intensive system. It is hence all the more important to further the association between workers and urban middle class consumers to seek a sustainable model. A model that does not reproduce old identities of the struggling handicrafts worker or one that does not rest on the exploitation of such a worker.

Abhilash brings clarity to the fact that the Tax Denial Satyagraha is mainly a consumers’ movement. “We are taking the help of artisans and workers to understand what they want. If they completely enter the protest mode, we know that the production will take a hit,” he admits and adds: “The idea is to not burden the rural further.”

This kind of social association has the ability to assert claims for increased support from the state. But can we also expand our understanding of entrepreneurial endeavors to include alternative occupation initiatives? Can we, in our demands, create a shift in the nature of labour in handmade production where the workers have not just incentives but also greater claim on their products? Perhaps only when new technologies are sought with a view to remove the burden of sustainability from the marginalised, can the centres and margins of the handloom world truly converge.

(Names of some of the sources have been changed to protect their identity).

(Shraddha N.V.Sharma is with the Advanced Centre for Women's Studies, Tata Institute of Social Sciences, Mumbai).