Young Director Jayakodi has woven the story around the dead body of a raped and murdered sex worker and brought out the travails of women in a sex starved male-dominated world in a gripping manner but interspersed with humorous interludes to relieve the tension.

Known by the nickname Suddhi, the young woman had run away from her husband, his family and his village, unable to stand the amorous advances of the village men, including her father-in-law.

But in the big bad city where she sought salvation, Suddhi became a sex worker, again, only to be exploited, raped, murdered and abandoned in a mortuary.

Following press coverage of Suddhi’s mysterious death, her husband, Abasiri, comes to the mortuary to identify the body and in a subdued away, renews his relationship with his wife, albeit only a corpse. He decides to take it to his village to give it a decent funeral to atone for the injustices done to her. 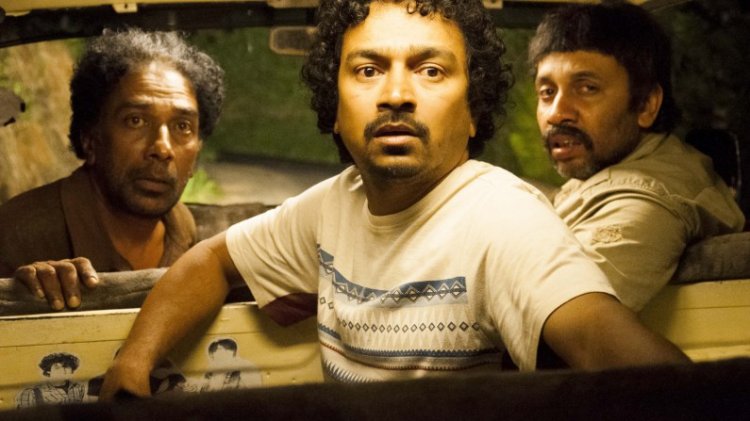 (Still from the film)

At the village, there is commotion but Suddhi, through dead, surrealistically speaks to the villagers through a crack in the coffin, telling them about the fate of women in contemporary Sri Lanka in its villages as well as the towns.

But the longest part of the film is Abasiri’s struggle to take Suddhi’s body to the village. He and his bosom friends trick Lenin, the driver of a decrepit van, into carrying the coffin which is supposedly “empty”. But on the way, the lie is exposed when the coffin falls off the roof top rack and Suddhi’s body is exposed. Driver Lenin is shocked and angry at being cheated, but gets round to resuming the journey.

The idiosyncrasy of the embalmer in the mortuary, the challenge of finding a van and facing the risks of transporting a dead body over a very long distance while keeping the driver in the dark about the cargo, are grippingly told but with flashes of humor.

The jury at the 8th SAARC festival described Jayakodi’s direction as “poignant storytelling about marginalized characters.” It further said: “The director captivates the audience through very clever cinematic storytelling, continuously surfing on the cutting edge of irony and humor.”

Mahendra Perera, who played the role of Abasiri, bagged the Best Actor award “ for the depth, realism and sincere heart-felt portrayal of his character who gradually releases his emotion and connection to the corpse.”

As a Sri Lankan reviewer put it: the film 28 shows that “sex remains a monopoly of men, and the handful of women that dare challenge that status quo will be put in their place by any means necessary—be it rape, slut-shaming, victim-blaming, or even murder.”

Asked what made him do a morbid film centered around a dead body, Director Jayakody himself said that he wanted to do a film to tell the people everywhere in Sri Lanka ,the men and women, about the crass way in which women are treated and sexually exploited in Sri Lankan society.

“Neither our schools nor our religious institutions touch the subject of sexual exploitation and harassment of women. I wanted to make a film that will bring out the plight women,” Jayakodi said.

Asked if he expected the film to win an award at the SAARC festival, Prasanna Jayakodi laughed and said that the film had already won laurels in international festivals.

At the Rotterdam International Film Festival in 2014 (it was shown in Sri Lanka only in 2017) it won the NETPAC Jury Award for Best Film. Lead actor Mahendra Perera and Jayakodi were nominated for the Asia Pacific Screen Awards in the categories Best Performance by an Actor and Best Screenplay respectively.

The Jury of the Rotterdam festival said that that 28 was “a well-measured and crafted film that emotionally engages the audience through poetic storytelling of a critical subject.”