No Aadhar, No Education: But Rohingya Girls Beat the Odds And Educate Themselves

In Delhi’s Kalindi Kunj refugee camp, no woman amongst 90 Rohingya families living there has a college education. That said, several women through their resilience have fought against the odds and built a life for themselves despite the obvious hardships.

For the father of 22-year-old Sabekun Nahar, the cost of providing for her education was an overwhelming burden. Today, Nahar is using her hard earned education for the betterment of her community.

“I thought the best way of contributing to the society is by educating the people, so I started teaching children living in the Rohingya Camps. Alongside I worked as a volunteer with few NGOs in bid to improve the lives of people here,” Nahar, who is expecting her second child, said.

In her five years in Delhi as a refugee, she has worked as a teacher and volunteered with various NGOs. She is currently working with Don Bosco trust and looks after the medical issues of women and children in the refugee camp. Alongside, she acts as a liaison assistant and translator in the camp. Nahar expresses regret over the recent violence in Rakhine state and said only education can solve the problems Rohingyas are facing.

Rohingya Muslims, who are a minority in Myanmar have been called one of the most persecuted minorities in the world by the United Nations. More than 40,000 refugees migrated to India to find refuge and amongst them only about 14,000 are registered with the UNHCR. Recent violence in Rakhine has once again revealed just how vulnerable the community is, with huge human rights violations reported in the mass violence that drove thousands out of Myanmar over the last year.

“In our country women were not allowed to move out of the house but after being thrown away from there and after facing the world, we have realized how important education is for everyone,” Nahar said, sitting in her small shanty built with the help of blankets and cardboard.

Nahar says that after the government made Aadhaar Card mandatory for school admissions, the little access they had to education is subsequently eroding because schools have stopped admitting their children.

“I want members of my community especially women and children to get more education and become independent but the refugee tag that is attached to us has become a barrier to our development and social mobility,” she added.

Despite threat to survival looming over Rohingya refugees, the women in the community remain determined to study, work and contribute to the community. However they are unable to find any work due to their refugee status, lack of education, ghettoised residence and sometimes language barriers prove to be an impediment. 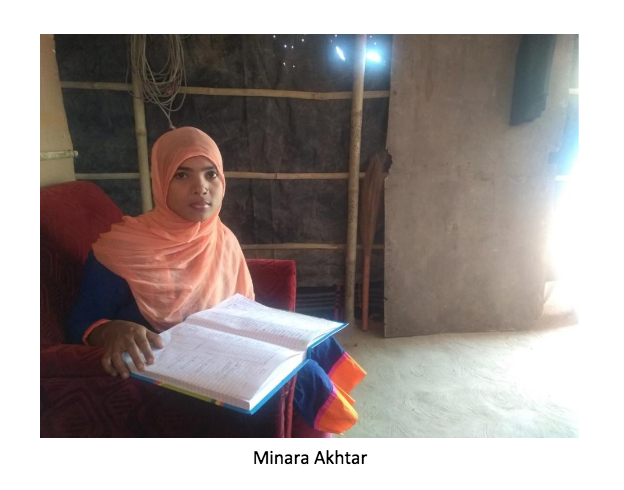 Another Rohingya woman, Minara Akhtar who migrated to India in 2015, is the only female leader of the Youth Club with three other men. The Youth Club is a body of the UNHCR, through which these volunteers directly communicate the problems of the women and children of their community to authorities of the organization.

“We conduct awareness programmes twice a month for women to make them aware of women health issues and maternity health care. Apart from this, we also try to impart basic education where we teach them to write their names, signature and make them aware of the developments of the political cause of Rohingyas and status of other Rohingyas over the world,” Akhtar said.

As there is no media exposure and owing to the lack of education among the women, they are not aware of the complex nature of the political persecution and reasons for their displacement.

Minara Akhtar, who before migrating to India lived in Bangladesh, is qualified to be an Islamic teacher through a qualifying examination in Bangladesh. She is also a Hafiz-e-Qura'an (one who has memorized Quran cover to cover). “In Bangladesh, we could get free education in Madrasas but in Delhi there is no provision for refugees to get education,” she says. Akhtar has studied up to the 9th grade in Bangladesh and wishes to continue her studies in India.

Despite the lack of opportunities for Rohingya women, Dil Mohammed, father of four daughters, wants his daughters to be independent and get a good education. “Since, this country is new to us and we do not know the language well, I fear sending my daughters to schools which are far away. I wish there was a school nearby. I want not just my daughters but every girl to receive an education,” he said.

One of Mohammed’s four daughters goes to a school set up by an NGO with her brother. Another goes for sewing classes nearby along with three other girls of the community.

Through skill-based centres and community learning, many Rohingya women in the camp are skilled at making handicrafts, embroidery and sewing. They wish to make these skills a source of livelihood but lack resources to buy raw materials. Even in cases where they’ve managed to buy raw materials, finding customers has been an insurmountable tasks.

Noufal P K, CEO of Human Welfare Foundation, an NGO working for Rohingyas and their welfare, talks about Rohingya women and how their knowledge of handicrafts can help in their upliftment.

“We wanted to do something for the Rohingya women in the area. We conducted a survey where we spoke to the women and found out that they are good at handicrafts so we picked up this skill and are now focusing on brushing up these skills. We made a list of items they can make and we are building a separate class with facilities like sewing machines and other things they might need,” he said.

Along with training, the NGO will also provide a platform to the women in the camp to sell their final products. Such schemes give a ray of hope to these women who are willing to put in the work to better their lives, but are faced with insurmountable challenges along the way.