The tip of an iceberg

NEW DELHI: ‘He had been beating me for many years. On several occasions, he even injured me with an axe. I had thought of leaving him long ago, but did not do so because of our children. It became unbearable and I had to do it, else he would have killed me,’ Guneswari Barkataky told the media.

Barkataky, 48, a resident of Mazgaon, Lakhimpur, Assam, reportedly cut off the head of her ‘husband’ with a machete last Tuesday night. Wrapping it in a plastic bag she arrived at the Dhalpur police station and surrendered. She has been remanded to judicial custody.

The last National Family Health Survey conducted in 2015-16 by a Ministry of Health and Family Welfare recorded the following responses of 7 lakh women across the country:

Ever-married women who have ever experienced spousal violence:

Ever-married women who have experienced violence during any pregnancy:

Women owning a house and/or land, alone or jointly with others:

Women having a bank or savings account that they themselves use:

Women having a mobile phone that they themselves use:

A 2017 paper by Ameet Kalokhe et al analyses over a hundred such quantitative studies to try and understand the prevalence, consequences and causes of domestic violence in India. Some extracts from the draft introduction, which draws together data from different studies:

‘Domestic violence or DV is defined by the Protection of Women from Domestic Violence Act 2005 as physical, sexual, verbal, emotional, and economic abuse against women by a partner or family member residing in a joint family.

National statistics that utilise a modified version of the Conflict Tactics Scale to measure the prevalence of lifetime physical, sexual, and/or emotional DV estimate that 40% of women experience abuse at the hands of a partner.

Data from a recent systematic review by the World Health Organization provides similar regional estimates and suggests that women in South-East Asia (defined as India, Maldives, Sri Lanka, Thailand, Bangladesh, and Timor-Leste) are at a higher likelihood of experiencing partner abuse during their lifetime than women from Europe, the Western Pacific, and potentially the Americas.

Among the different proposed causes for the high DV frequency in India are deep-rooted male patriarchal roles and long-standing cultural norms that propagate the view of women as subordinates throughout their lifespan.

During childhood, less importance is given to the education of female children; further, early marriage as occurs in 45% of young, married women, according to 2005–2006 National Family Health Survey data, and may also heighten susceptibility to DV.

In reproductive years, mothers pregnant with and/or those who give birth to only female children may be more susceptible to abuse and financial, medical, and nutritional neglect. Later in life, culturally bred views of dishonour associated with widowhood may also influence susceptibility to DV by other family members.

In addition to being prevalent in India, DV has also been linked to numerous deleterious health behaviours and poor mental and physical health. These include tobacco use, lack of contraceptive and condom use, diminished utilisation of health care, higher frequencies of depression, post-traumatic stress disorder, attempted suicide, sexually transmitted infections, HIV, asthma, anaemia, and chronic fatigue.

While many aspects of DV are similar across cultures, recent qualitative studies describe how some aspects of the DV experienced by women in India may be unique. These studies highlight the role of non-partner perpetrators of domestic violence for those living in both nuclear and joint families. (These families are patrilineal where male descendants live with their wives, offspring, parents, and unmarried sisters.)

They discuss the high frequency and near normalisation of control, psychological abuse, neglect, and isolation, the occurrence of DV to women at both extremes of age, dowry harassments, control over reproductive choices and family planning, and demonstrate the use of different tools to inflict abuse – i.e. kerosene burning, stones, and broomsticks as opposed to the gun and knife violence more commonly seen in industrialised nations.’

Do many women report domestic violence in India? We borrow this chart created by The Wire based on response data from the 2006 round of the NHFS: 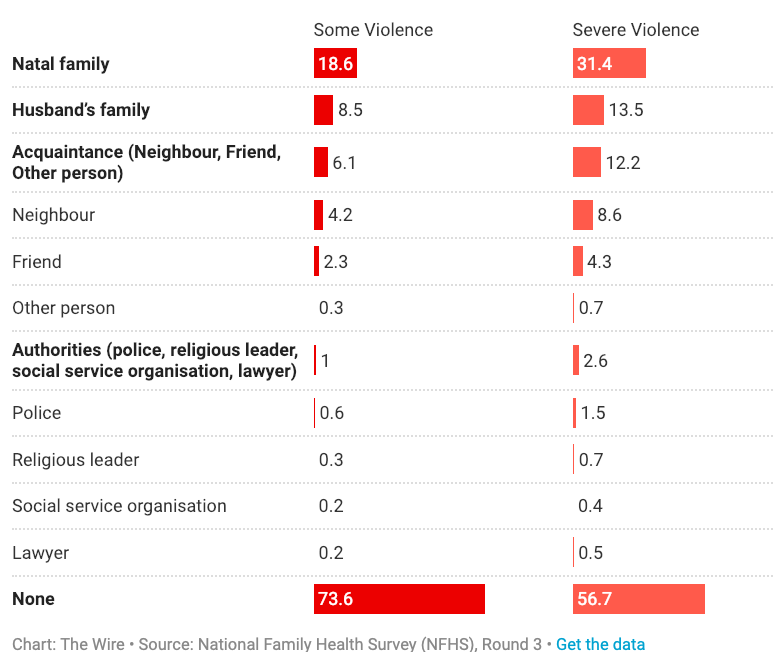 A Gender Inequality Index created by the United Nations Development Programme ranks India at the 130th position among 189 countries surveyed.

According to the UNDP this index ‘is a composite measure reflecting inequality between women and men in three different dimensions: reproductive health (maternal mortality ratio and adolescent birth rate), empowerment (share of parliamentary seats held by women and share of population with at least some secondary education), and labour market participation (labour force participation rate).’