'It stands to eradicate the legal existence of transgenders'

NEW DELHI: On Tuesday the Rajya Sabha passed the Transgender Persons (Protection of Rights) Bill by voice vote. Its enactment has been met with countrywide protests from the LGBTQIA+ community.

The bill was tabled in the Rajya Sabha by Minister of Social Justice and Empowerment Thawar Chand Gehlot and passed by voice vote without any amendments, despite several members of the opposition, including Dravida Munnetra Kazhagam MP Tiruchi Siva, calling for a vote to send to a select committee for scrutiny.

Protests were held in several cities. At the recent pride marches in Bangalore and Delhi many people came out to speak against the passing of the bill.

Aqsa Sheikh, a transwoman, doctor and medical teacher at Jamia Hamdard in Delhi observed that the Rajya Sabha passed the bill “despite the pleading and elaborate discussion on lacunae in the bill by members of the opposition. And despite numerous representations and protests by the trans community, especially during the Delhi and Bengaluru Pride marches,” Sheikh said.

“The government wants to do charity, give token recognition, and in the process make life of transgender folks more miserable. 26th November will go down in history as a Black Day for Trans Rights. The arrogant government knows that it can push any bill through the house and hence has stopped listening to others. But the trans community is determined to make its voice heard. We will keep protesting,” she said. 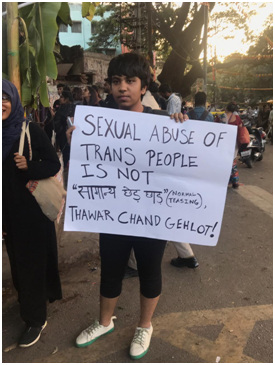 Parliament’s passing the bill has rattled queer communities and individuals and their allies throughout the country. Its introduction on Transgender Remembrance Day and its passing on Constitution Day is being seen as a massive insult to the community and the ideology upon which the Constitution was built.

“I see no equality or protection in this so called Trans Protection Bill. It’s making a mockery out of the entire trans community,” said Harren Surroch, a student of Amity University, Noida.

Fellow student Simran Srivastava added, “The Transgender ‘Protection of Rights’ Bill, ironically enough, stands to eradicate the existence of transgenders legally and aims to only accept transexuals, or more specifically, people who have had sex reassignment surgery.”

Srivastava called it a transphobic bill. “Even most transexual people do not have the opportunity to get surgery, and no part of the bill makes any effort to aid that. It’s beyond just the humiliation and perverse nature of this bill, which has the entire queer community and our allies enraged. It stands to erase identity, to violate a person’s bodily autonomy and to restrict them to a label they don't even identify as.”

In similar vein, trans rights activists and allies have argued extensively that the new law is discriminatory and strengthens the stigma around transgender persons.

For instance, the bill declares that transgender persons have the right to a “self-perceived” gender identity. But it also says that for the government to recognise them as such, they will have to apply to the District Magistrate for an identity certificate, which will “confer rights and act as a proof of recognition of their identity as a transgender person.”

If you have sex reassignment surgery, you must apply for another certificate to change your gender identity. You will have to show a medical certificate issued by the Medical Superintendent or Chief Medical Officer, which will be analysed by the District Magistrate for its “correctness”.

As many have observed, cisgender or gender-conforming individuals don’t need medical examinations or magistrate certificates to prove who they are to the government. 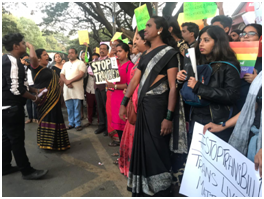 With regard to sexual abuse and harrassment of transgender persons, the bill stipulates a punishment of six months’ to two years’ imprisonment, with the possibility of bail. In comparison, sexual violence against cisgender women can attract seven years’ imprisonment.

“I am a 22 year old pre-op trans girl. I was raped Sunday morning. I tried to report it to the police, and they said that based on the description of the truck I gave, they couldn’t locate it and that they were answerable to their superiors and had to close the case.

“They didn’t let me leave the police station until I wrote and signed a statement saying that I had called the police out of spite and anger, and that nothing really happened with me,” said a member of the transgender community who wished to stay anonymous.

She is currently staying at a shelter in Delhi and seeking counseling from a non-government organisation. Her story is only one of unnumbered harrowing experiences faced by trans people, who are unable to find ways to seek justice.

Many feel that the bill in its blithe ignorance will do little to change that.

“The bill is not only regressive but also grossly unscientific. In fact, similarities can be traced back to the medieval and discriminatory Manusmriti (Manu’s Teachings Remembered).

“It wrongly uses the terms ‘intersex’ and ‘transgender’ interchangeably. So it denies identification to an entire community. And it barely focuses on employment and reservation policies which are important concerns for the community. The transgender community faces horrific forms of sexual violence while they try to survive. The bill does nothing to change that. The laws regarding sexual violence against a ciswoman and a transwoman are worlds apart,” said Anwesha Das, a 22 year old from Shillong.

Das recalled the controversial screening process and criminalisation of begging that were part of the previous drafts of this government bill. While these provisions were removed following widespread protests, Das believes the current bill “does very little to benefit and protect the community. Instead it places them in the path of peril, unsaid violence, and uncertainty.” 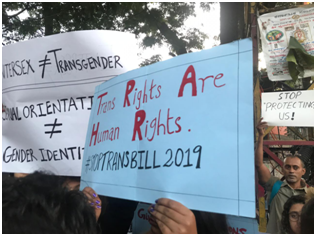 Similar arguments are being made by members of the queer community throughout the country.

“The Trans Bill 2019 is in absolute contradiction of the Supreme Court’s NALSA judgment in 2014. Stripping down in front of the magistrate to get yourself a gender certification is totally humiliating. Also, how can they define intersex people as transgenders? It changes the meaning of intersex completely,” said Pratyush Manjula Pani, LGBTQ+ activist and member of the Parichay Collective, a queer collective in Bhubaneswar.

“The foremost reason to oppose the bill is its prohibition of self-certification of the trans individuals. In a country like India where families abandon their trans kids, it’s too difficult for one to afford sex reassignment surgery. What about them?

“This way a large number of trans persons will be affected. Let’s not forget about trans men. There are lots of trans men out there who are still in the closet. Once the law is implemented, lots of lives will be at stake. It's scary because the bill now is just a rubber stamp away,” said Pani, referring to President Ramnath Kovind.

Many have argued that the government was not open to consultation with the community, and that no amendments were introduced to actually further the rights of the community.

“Despite us protesting both digitally and on the streets at Jantar Mantar and other places in the country, and then despite #stoptransbill2019 being the naara (slogan) of Pride in both Delhi and Bangalore, the Rajya Sabha MPs conveniently ignored us.

“They went ahead to pass a bill which has no inputs from the community, the very people it’s about, that more than anything puts the trans community on a lower pedestal than cisgender people and is not acceptable to any of us at all,” said Krishanu, a student at Delhi University.

Echoing these arguments, Vinay, who is vice-president of the All India Queer Association, said that “The Trans Rights Bill, in spite of great protest by our community in Pride, has still been passed. The Bill is not just inhumane to trans folks but also neglects the existence of gender non-conforming and queer individuals.”

In Delhi members of the transgender, intersex and gender nonconforming communities and their allies gathered at the Jantar Mantar on Tuesday to “voice their outrage and protest against the bill”. 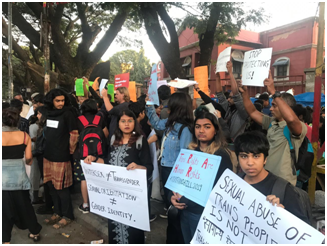 They released a statement suggesting amendments to overcome what they believe are “the most harmful aspects of the bill” namely:

“1. This Bill upholds the humiliating process of submitting an application to the District Magistrate for a legal recognition of one’s transgender identity, and it makes getting an ID as male or female dependent on first registering as transgender, and then supplying proof of surgery. This contradicts the NALSA judgement of the Supreme Court.

2. The Bill postulates that sexual violence against trans persons will face punishment from six months to two years, in comparison with the 7 years of imprisonment for sexual violence against women. In this way the Bill directly discriminates against the Trans, intersex and GNC [gender non-conforming] communities and strips us of dignity and equality.

3. The Trans Bill 2019 denied reservations and affirmative action for trans, intersex and gender nonconforming people in employment, education, and healthcare. Its provisions around discrimination have no penalties whatsoever, making their need completely redundant. Thus between not preventing discrimination and failing to provide any affirmative action on reservations, it puts our very lives and livelihoods at stake.

4. The Bill requires Transgender people to reside with their birth family - even though birth families are often the first site of violence against these individuals - or approach the courts to live in a shelter home. Measures for ‘rehabilitation’ are recommended in the bill. This violates our fundamental constitutional rights of free movement.

5. A comprehensive anti-atrocities, anti-discrimination legislation, which upholds and ensures equal access to all civil rights and spaces of housing, employment, education and medical care for transgender persons is necessary, not this watered down and dangerous piece of legislation.”

In Karnataka the Coalition of Sex Workers and Sexual Minorities’ Rights released a statement demanding that President Kovind refuse to sign the bill into law and return it to the Rajya Sabha instead, for it to forward to a Select Committee of Parliament.

“As we have long been repeating, this is a poorly drafted Bill that does not take into account the lived realities of trans* persons, nor does it ‘empower’ us in any way, contrary to all the claims made by the government,” the statement reads.

People also took to the streets in Bengaluru to protest the Parliament’s decision.

Adrian, 20 years old, was in the process of getting his documents redone when the bill was passed.

“How does someone else get to decide what I do with my body. Who gave you the right to keep us, or do away with us?” he asked.