'Principal Has to Go': Gargi Students

NEW DELHI: Students of Delhi’s Gargi College have taken to social media, demanding the Acting Principal Promila Kumar step down, alleging administrative inaction and security lapse after sexual harassment at the hands of an unruly crowd inside the college campus. The students of the all-girls college in the heart of South Delhi said they were sexually assaulted by ”middle aged men” who jumped the gate in full view of the police stationed outside, to enter the college during the annual cultural fest ‘Reverie’.

Prachi Mehra, a student at Gargi College told The Citizen, "The entry was supposed to be closed at 4:30 p.m. for all students but I was near the boys’ entry gate at 4:40 p.m. and witnessed a storm of men barging into the college premises. Most of whom did not even look like college students."

"I also saw boys jumping over the wall fences adjacent to the college gate. The police personnel were outnumbered by the mob of men who entered our safe space. Our fest is the time of the year when we enjoy the most but they turned it into a nightmare," she said.

"During the concert, there was no space to breathe let alone walk across the ground to assist our friends or seek help. There was no network on our phones hence we couldn’t reach out to our friends. People were standing on stall tables during the concert which was extremely unsafe. We couldn’t experience our last fest the way we had wanted to," Mehra told The Citizen.

“Men stood in gangs and ogled at women, groped them, tried to feel them up, pushed them and touched them throughout the concert. Aggrieved students went to the principal to receive her apathy and insensitive comments,” a statement released by the Gargi college students reads. A student alleged that Principal Kumar further stated in a personal conversation, “If you feel unsafe, don’t come to these fests.”

Students remain perturbed by the reported inability of the administration to ensure students’ safety. According to media reports, Kumar allegedly stated, “There was an arena in the campus meant only for girls. If they were outside that it was their personal choice.” 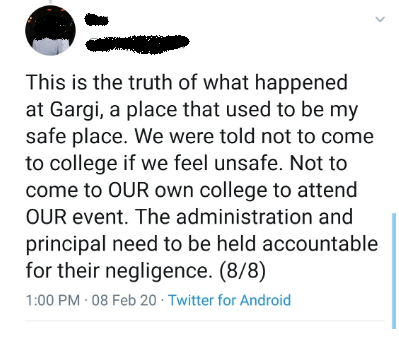 ‘Reclaim Gargi: Safe Fest or No Fest’, a protest was organised by students of Gargi College today, to show solidarity with “women who were molested, harassed and had unsafe experiences because of the administration.”

“Our principal saying things like "itna unsafe feel hota hai toh mat aaya karo" is exactly how you normalise sexual harassment and toxic masculinity. This is not how you "empower" a college with all women. Please just fucking resign. #GargiCollege,” Nishtha, a student tweeted. 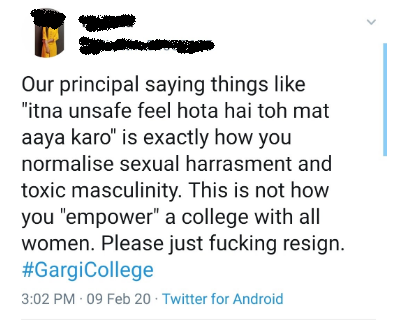 Another student Trisha Tanwar tweeted, “Even when the girls were trying to enter the barricades made specially for Gargi Girls a teacher announced from stage she Said and I quote ,” you come late and you want safety.” As if safety is luxury. It’s the bare minimum we expect from authorities.” 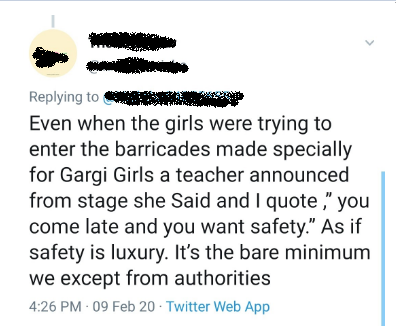 As per the students’ statement, from 3:30 pm onwards, crowds of men pushed through the gates, with the police and RAF standing by inactive. Soon a crowd of 8000-10,000 individuals gathered inside the college campus, having “jumped the gates.”

“Oh and how can we forget to mention the police forces present there who were just clearly there to watch whatever shit goes down without even being bothered with drunkards breaking into the gates and molesting women. #GargiCollege #delhipolice,” Nishtha further stated in a tweet. 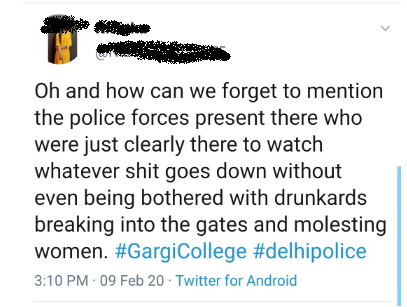 Annie Raja, General Secretary of National federation of Indian Women and CPI leader told The Citizen that the principal is answerable and should be removed from the post, following which an inquiry should take place.

“The responsibility of the college authorities is to ensure safety and protection and no violation of the rights of these students. That is their responsibility, that is why they are there.

And if they are not acting or carrying out their responsibility, then I think they have lost their moral right to be in those posts,” Raja stated.

Principal Kumar reportedly told IANS, "It is a serious incident and I will deliberate on it. It is a matter of serious concern, but unfortunately nobody has reported it to me.”

“We had a huge security arrangement, including police, bouncers and even commandos along with the teaching and non-teaching staff, on duty. No one came to us and reported any such incident. We were taking rounds in the crowd. However, there is no doubt that it was very crowded. We were very vigilant but we couldn't see anything of this sort," she added.

Syeda Hameed, social and women’s rights activist told The Citizen that the principal’s statements were extremely “bland.” “That’s a very bland reaction. Obviously, this is totally unacceptable and the fact that it should have happened in an educational institution… You know, a series of such things are happening. This is not the first time,” she said.

The National Commission for Women (NCW) has reportedly stated that representatives will be sent to Gargi College today to investigate the incidents. Meanwhile, the police told PTI that no complaints have been received by them, neither by college authorities nor students.

"We are inquiring into the matter. However, we haven't received any complaint so far," Deputy Commissioner of Police (DCP) South, Atul Thakur told PTI. 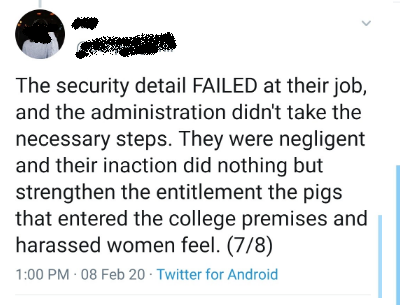 Students further reported that many in the crowd of men were intoxicated and smoking marijuana on college premises. An Instagram page ‘Speak Up Gargi’ that posts anonymous accounts, highlighted a number of personal experiences of harassment faced by students on the last day of the fest. One such anonymous post claims that in the ten minutes that the student was unaccompanied by her male friends, “I was groped thrice by a group of men and when I realised what had happened I looked at them and they laughed in my face.”

The student further alleges a number of emergencies wherein two women had panic attacks, a third experienced an asthma attack due to the suffocating crowd, one “fainted because a man started masturbatung at her” while another lay unconscious on the ground entry.

A first year student reported a group of five middle aged men, seemingly drunk, cornered her and attempted to molest her.

Kamla Bhasin, a developmental feminist activist, poet and author, expressed her shock, stating, “You are not safe even within your college premises these days?”

“It shows how blatant these attacks can be. And it really shows the downfall of what is happening to our society, our men. All kinds of violence seems to be on the rise—grab whatever you can, just do whatever you want—as if there is not going to be any punishment, nothing will happen,” she told The Citizen.

Some students further reported that the men who barged in were part of a pro-CAA rally and were chanting “Jai Shri Ram.” However, many have come forward on social media with requests not to “politicise the narrative.”

Bhasin too stated, “I can go there and say anything. I can say ‘Allahu Akbar’ or I can say ‘Jai Shri Ram’. So I don’t care what they were saying, but for any men to do this in the heart of the city. This is pathetic.”

Reportedly, this is not the first time Gargi College’s fest has been breached by outsiders. As per the students’ statement, in 2019, the “paucity of bouncers and police inside and outside the college caused a rowdy crowd to enter.” Students allegedly faced sexual and physical harassment, post which a complaint was filed with the Internal Complaints Committee (ICC). However, the complaint was reportedly dismissed as a security issue, not a sexual harassment complaint.

For this year, to control the crowd and as a security measure, a pass system was introduced, wherein only men with passes could enter the premises. However, many students stated that passes were not being checked and anyone was being allowed to enter.

Meanwhile, All India Democratic Women’s Association (AIDWA) has released a press statement, expressing shock and condemning the harassment of girl students by a group of pro CAA supporters.

“AIDWA is appalled to learn that the college authorities took no notice of the complaints of the girls. AIDWA demands that the police takes cognisance of the incident and immediately bring the culprits to book. It also demands that the University look into the insensitive and irresponsible behaviour of the Gargi college authorities. AIDWA expresses its solidarity with the girls and will pursue the matter further,” the statement reads, further adding that all units of AIDWA, includuing SFI and DYFI will protest against the “rampant goondaism by saffron forces in college and university campuses.”