Masrat Zahra - A Requiem for Reality

A journalist from Kashmir is booked under the Unlawful Activities (Prevention) Act for “glorifying anti-national activities” and “provoking the public to disturb law and order”.

The memory of August 2019 has the semblance of distance and simultaneous immediacy. Diplomacy dominated parliamentarian passages and riots resonated with the discerning. Between the shadow lines, the government amended a colonial-era act which many feared could capitulate to political motivation.

It gave the state unfettered power to brand individuals and groups terrorists if it believed so - and jail them for up to seven years. It was a law deemed draconian for a democracy.

The Unlawful Activities (Prevention) Act seeped through the cracks - as people in Jammu and Kashmir woke up to an eerie silence while spectators hailed the government’s latest masterstroke.

Two days before the longest communication blackout began, a 26-year-old photojournalist from Kashmir was asked to submit her work for an exhibition in New York. She had previously worked for The Washington Post, The Sun, Al Jazeera, and The Caravan. This exhibition would be a compendium of photos by journalists who are living under threat for delivering news.

Masrat Zahra was ecstatic. In all her work, she wanted to put a human face to conflict. This face, unseen and woefully unheard, featured thousands of female voices living through the conflicted reality of Kashmir.

On Saturday, Srinagar’s Cyber Police Station received information through “reliable sources that one Facebook user namely ‘Masrat Zahra’ is uploading anti-national posts with criminal intention”. She was booked under the UAPA for threatening public unity and glorifying anti-national activities, with “criminal intentions to incite the youth”. Another Kashmiri journalist, Peerzada Ashiq who is a correspondent for The Hindu, was charged for spreading fake news.

The complaint against Zahra pertained to a photo of blood-soaked newspaper cuttings and clothes of a man gunned down by the Indian army on the suspicions of being a militant. It was taken in December 2019, and quoted the man’s wife saying how he was shot 18 times.

In a statement, the police station said that her photographs brought disrepute to law enforcing agencies “besides causing disaffection against the country.” She has been charged with Section 13 of the UAPA, which pertains to unlawful activities, and section 505 of the Indian Penal Code (IPC) which offends any class or community and causes fear or panic. The punishment mandates three years of imprisonment and/or a fine.

The J&K Peoples Democratic Party called her arrest a “systemic pattern of assault on freedom of expression.” Zahra’s charges follow a slew of arrests in the last three weeks - hinting towards a wider attack on press freedom. Two students of Jamia Millia Islamia University were arrested for leading protests against the citizenship law and conspiring to incite violence in Northeast Delhi in the February riots.

A Manipuri scholar at Jawaharlal Nehru University faced similar charges of “inciting disaffection towards the government” for an article he wrote last year which was critical of the BJP government. This month, two FIRs were filed against The Wire’s founding editor Siddharth Vadarajan for an article which allegedly created or promoted “enmity, hatred, or ill-will between classes”.

All these violations of law and order raise pertinent questions about truth and dissent. In the court of right-wing public opinion, any dissenting voice is deemed anti-national - making one wonder if the baton of nationalism has been passed on to the hypernationalist cacophony of Mr. Goswami. Therein might lie a codification of what unites and what divides.

It might do us well to ask what is it with a journalist’s interrogation of reality which threatens social harmony? Is being critical of the government the same as inciting disaffection?

In February, the Kashmir Press Club put forward a statement highlighting a pattern of harassment of national and international journalists in the Valley. India’s ranking in this year’s Press Freedom Index has dropped to 142, slipping four ranks in the last three years.

According to the curators, India’s score in this year’s World Press Freedom Index is “heavily affected by the situation in Kashmir where, after rescinding the state’s autonomy, the federal government shutdown fixed line and mobile Internet connections completely for several months, making it virtually impossible for journalists to cover what was happening in what has become a vast open prison.”

Up until April 18, Masrat Zahra captured fettered life - children walking to school, a man sailing on the Dal Lake, a woman passing through ruins. In several interviews she spoke of her intervention in a man’s world, and how these agents of power viewed her.

She also recounted her tryst with law officials and the barricades to reporting in an interview with The Caravan - saying “main patrakaar hun, mujhe kaam karne do” to paramilitary officials.

She was capturing Kashmir from the perspective of a woman. During conflict, there is a narrative of destruction and mayhem; of men carrying arms against other men. One which rarely finds a voice is that of women who peer at the political dialogue from the outside.

Studies and reports have long waxed pertinent how conflict affects women and families. In Kashmir, the power of state and patriarchy can be consuming - and it is through the works of Zahra do they find succour.

As a disputed region with restricted access, Jammu and Kashmir has been relegated to the shadows. Lives under military surveillance barely make it to mainstream media, and when they do, their repression is either denied or justified.

To borrow from Orwellian literature, which is slowly becoming the pulse of our times, “Unpopular ideas can be silenced, and inconvenient facts kept dark, without the need for any official ban...Anyone who challenges the prevailing orthodoxy finds himself silenced with surprising effectiveness.”

In restricting her and other channels of media, the government is sending a clear message – speaking truth to power is a criminal act when truth has been deemed unlawful.

But in her eyes, she speaks of a reality which has endured, and one which cannot go unnoticed for long. A visual journalist in a conflict area has a different story to tell – one of strife and suffering, one of loss and lamentation. To penalise her work is to put journalism under an existential scrutiny, and render the fabled freedom of expression outdated. 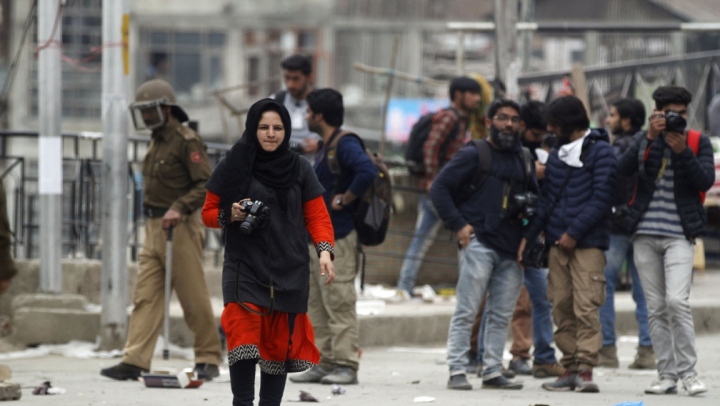