I’m an extroverted, optimistic, people person, and pre-lockdown, a regular day for me wouldn’t end without meeting at least 15 people. I’ve quarantined my art before - when I was studying to crack the AIEEE examination. But I emerged from that quarantine as a dancer never wanting to leave the stage.

Since then, I refused to stay caged in. I’d rush, run and engage myself with people across the city. No day would go by without art. Some days it was dance or drag, other days were spent with performance art.

My body craved the adrenaline from creating art.

As news of the coronavirus began creeping in, I tried convincing myself that it wouldn’t come here - not to my country, not to my city, and even as it spread, I remained hopeful of my free space.

Before I knew it, the boundaries around me squeezed in tight. Following the lockdown, I became confined to four walls.

I spent the first week introspecting; telling myself I will not stop. Thankfully, I had a camera and a friend who can click pictures. I knew I was going to create art.

I started performing drag in June 2019.

For drag, I‘d shop a lot: Pick up clothes I loved, items I liked. I used to create looks and then shop and spend a bomb to make that look. But drag gave me a way to express myself. It helped me create a voice for myself.

In quarantine, I told myself: “Queer people lived half their lives in closets, so it will be a cake walk for us to be isolated for few days. This actually gives us the opportunity to put heteronormative society within a confined space, so as to develop a better understanding of closeted experiences.” And that is why it’s important to be in drag when in quarantine.

Every day, I picked a look. The first week I started, I got my inspiration from the excessively heard term over the week: Coronavirus. 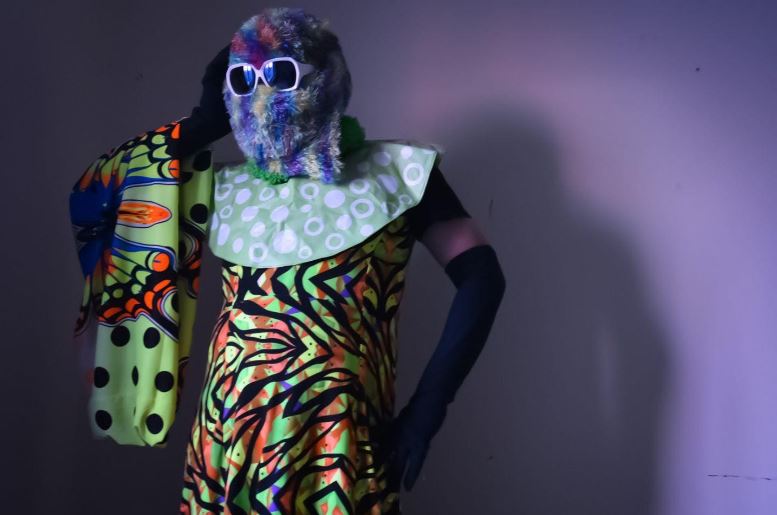 While the pandemic was already threatening the country, it was important to treat it as “ordinary” to ensure we don’t create panic but create awareness. The culture of anti-art gives the opportunity to represent even diseases.

Taking an example from Japan, when in the 1960s and 1970s Hijikata Tatsumi was dancing in Butoh. It was the time following the postwar reconstruction after the Second World War, when the country was entering a high economic growth period. The manufacturing industry in Japan abandoned all waste in the rivers, and the sea at the coast of Japan was contaminated with garbage including heavy metals such as mercury and cadmium - causing mutations in human cells and a number of pollution diseases.

In the past, Minamata in Kumamoto prefecture was affected by mercury sulfide which dripped from fertilizer, entering the spine of fish curls. Local fishermen ate it without knowing it was contaminated with mercury. As a result, many people were victims of serious Minamata disease. Tatsumi Hijikata incorporated this tragedy into his own dance with the deepest resonance of distorted limbs of Minamata disease patients.

This was the idea to decentralize drag to representation of disease in human form.

When you present something in a human form there is an awareness, a reliability and an imagination which makes people understand.

Just as ideas of liberty and the elements are represented in multiple art forms, it becomes essential to symbolise disease in art - to untag the fear and humanise it.

As the days followed, I was running out of ideas and clothes and fashion. It was then that I started picking up trash or discarded lump material and started using it to create an image of art.

I created a drag art specimen that I call “Hairy Fairy”. When it comes to body hair, society’s standards for beauty for women are certainly stricter than they are for men – many people expect women to be clean shaven and even the slightest hint of hair is seen as ‘gross’ and ‘unsexy’. This series of photographs was to challenge the idea of beauty and natural hair.

Taking it to an extreme symbolic point, I used some of my wigs to create this S.A.S (my drag name which stands for Suffocated Art Specimen) named "Hairy Fairy" through which I wanted to relay the message of being bold and embracing the body - every part of it. 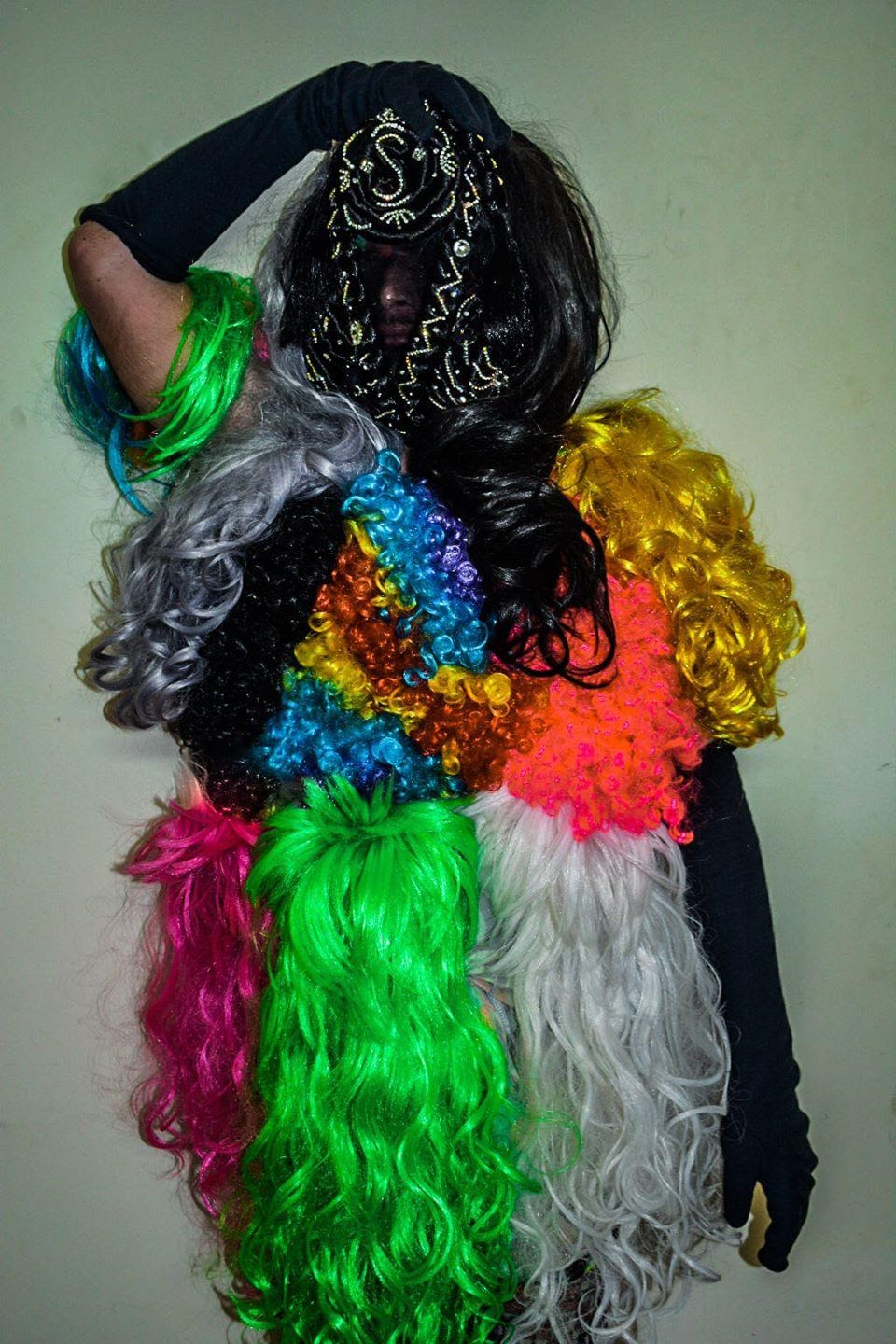 This madness of converting trash consumed me, almost like a drug that gets you high. I started looking for discarded material around and near me. Due to the lockdown, a friend couldn’t get cigarettes. He decided to cut down on smoking, and I took the opportunity to motivate him to quit.

He gave me all his cigarette packets which he had stored in a box. I created a look from 50 empty cigarette boxes procured from him. The look titled “Smoking God” is more than just a look. It’s a performance art piece that involves sitting and making it while maneuvering the symbolic reality of choking oneself with smoke. This calls out for a wave to end the choking game: A campaign to ensure that there is no more smoke from lighting up. 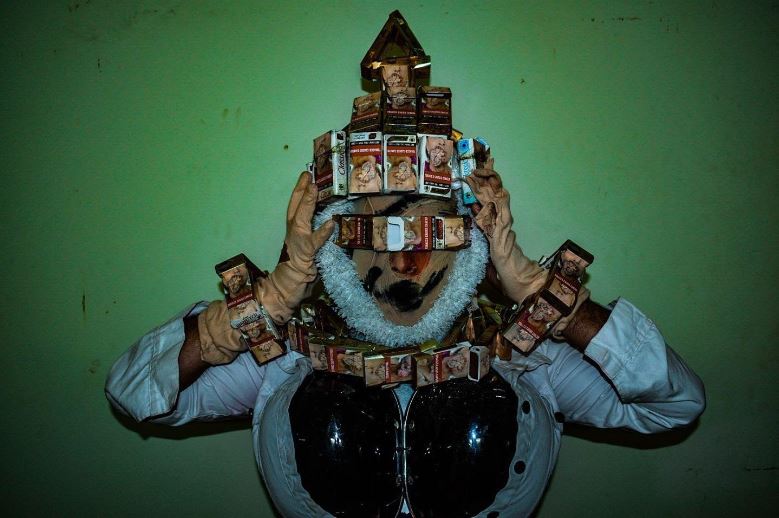 As the days passed, my madness to create drag grew more and more in lockdown.

I got obsessed; trying to work on placing a certain object in a certain space to create a certain outlook. Calling the process and the result the avant-garde (from French, "advance guard" or "vanguard", literally "fore guard") which are works that are experimental or innovative, particularly with respect to fashion, art, lifestyle or culture. The avant-garde pushes the boundaries of what is accepted as the norm or the status quo.

I worked on another look with all the waste silk cloth I had collected for a while, calling the look “Rotten Silk” as I wanted to create a bright image with things available to me. The #Tranimalization of fashion and color need to be scrubbed into a disformed structure and that’s how “Rotten Silk” was born.

The blue and the pink denotes the color of expression and symbolizes the trans flag; blue is masculine and pink is feminine and out of both emerges a disformed figure with gender delusions. The too-muchness presents the spectrum of gender and the visual eyes show a mirror to society as self-reflection.

Creating these images for myself made me realize how much time, money and unaffordability was linked to the act of going and buying drag materials from the outside.

I remember the stares society shoots when a boy steps into a women’s wear shop or a cosmetic shop and asks for kajal.

Quarantine has taught me to be free within the walls; loving myself daily. It’s taught me about how we abuse privilege for art; how we can become more inclusive and bring the essence of art in everything around us.

This quarantine helped me develop the ideology to re-examine drag art and create a new version of the art form - which is a function of subversion to reveal the absurd, the intermediary between the day-to-day and the intrinsic ideology creating it, which in turn opens that ideology to responses of judgement, mockery, acquiescence or anything that satisfies immediate, visceral shock.

Drag serves as the subversion of gender, revealing the ideology of capitalism - though it is more often and less correctly identified as detached patriarchal structures.

As someone once said “keep an artist in a dark room for few days and ask them to draw, and what you’ll get is a master piece.” Similarly, the more days I spend sitting and internalizing as a part of this quarantine, it stirs a creative madness for new art which is refreshing as well as inspiring.

I may not be fighting directly with the pandemic, but my art gives me a sense of power to keep myself motivated and in the process, create awareness.

Patruni Chidananda Sastry is a performing artist and dancer