“That’s where I fell.” 58 year old Santalachi Subba points to the flight of stone steps leading to the muddy floor of her hut. Situated in a corner of the cliff, the hut is barely noticeable when driving across the wildflung Badamtam Tea Estate, some 13 kms from Darjeeling.

I met her when she arrived at a relief camp early in the day, a couple of plastic bags covering her head. She stood in the rain without an umbrella, looking around. She saw I wasn’t born in this part of the world and when she saw me taking her picture she smiled.

Santalachi Subba is one of the 1,200 workers in the estate’s Lama Division responsible for the precious Moonlight Spring White Tea. A particularly rare kind of tea, last summer it fetched a whopping 2 lakh rupees per kg. It is branded Teabox and sold in boxes with a regal, minimalist design.

When asked what she thinks of the tea garden’s great success, Subba offers us some channa she is boiling in a smoky pressure cooker on an earthen wood stove. It’s the only meal she has managed to afford for the day. She doesn’t know how she will manage food tomorrow.

Right after Moonlight Spring White Tea gained celebrity status in the world of tea commerce, sometime in June, Santalachi Subba slipped down the stairs of her hut and broke her ribs.

“I couldn’t go back to work after that,” she explains. “It hurts to pull the basket up and down the hill.” As a result she was out of an income.

She also fears that if she doesn’t return to work soon, her 28 years of contributing to the tea garden will have been a complete waste. Without an income she will have to leave this house, nothing more than a cramped hut with two tiny rooms.

All the land in the plantation is owned by the management, which is prone to constant change.

Although the Plantation Labour Act (1951) does attempt to limit employers’ control over the lives of employees, it has failed to ensure the security of workers’ tenure. The tenure right of any worker is limited to the period for which they can labour. They can reside in the garden only so long as contribute to the business. With no tenure rights they are vulnerable to being evicted by the management staff.

The Act does guarantee workers certain benefits, including housing: clause 15 clearly states that “It shall be the duty of every employer to provide and maintain for every worker and his family residing in the plantation necessary housing accommodation.”

While a bare minimum of housing is provided to workers here, maintenance is a far cry. Subba shows us the empty space in front of the hut: “There was another hut right here. It was completely washed away when the rains came.”

The hut was among several homes that did not survive a landslide which took place in 1997, when Sikkim and Darjeeling witnessed many landslides due to incessant rainfall leading to 50 deaths and massive disruption along National Highway 31A.

June 7 of that year came to be known as the Black Day. Over 5,000 people across Sikkim and Darjeeling lost their homes.

Some people arrived to click pictures of Subba’s broken house the next day. “They took photographs, but they didn’t come back.” Along with her two daughters she managed to pull things together and move on with life. The garden and the government completely ignored the Plantation Labour Act’s stipulation to “maintain” every worker’s housing accommodation.

The Act also guarantees an allowance to every woman on maternity leave, but Subba denies ever having being given any such allowance. “I went to work both the times I was carrying my daughters. Only in the last month was I allowed to stay home. I didn’t get paid then.”

It is not a new story. Such exploitation is now considered to be “normal” in the tea gardens. India being a signatory to the Convention on the Elimination of All Forms of Discrimination Against Women (CEDAW), the government is compelled to ensure women’s safety and comfort in their place of work. But that’s just another fairytale.

The real convention, from which tea gardens are not exempt, is that women are not considered for promotion. As for tea plucking, which is a rare “special” opportunity, women are the easily available labourers. The common notion goes that tea plucking requires immense skill, yet this skill is utilised only temporarily, and often goes unrecognised and underpaid.

Santalachi Subba started her “special” work 28 years ago with a daily wage of Rs.120, and last year, right before her fall, she earned Rs.150 per day, which is not even the prescribed wage of Rs.176 that the new generation of tea pluckers collect.

On that barest minimum she has single-handedly provided for two generations of women, following her husband's death right after the birth of her youngest daughter, Rachana Rai. Rachana, now 25 years old, left for Delhi long ago and rarely returns to her mother’s hut.

She did leave behind her own daughter, however: Aniya Rai, a shy-faced 11 year old who dreams of becoming a teacher someday. She says her favourite subject in school is mathematics. She has never seen her father.

Her grandmother tells us, “She is an illegitimate child and he didn’t want to see her. He said he probably would have if she had been a boy.”

Aniya has lived with her grandmother since she was an infant. Telling us about Aniya’s mother, Subba says, “My daughter is pretty. What if someone marries her and she leaves Aniya here?”

We can’t help but ask about her other daughter. “She was very attractive… Some men from Nepal came and gave me some money. They said they would get her a job in Nepal and she can send me more money then. I never saw her again.”

Her daughter was 18 years old at the time and neither the police nor the garden manager came to help her.

Once again it is not a new tale: the picturesque colonial-era tea estates of Darjeeling are breeding grounds of child and woman trafficking. One of the most organised and silent crimes, trafficking has found a hub in West Bengal, where close to 44% of India’s cases are reported. Cases like Subba’s daughter’s go unnoticed and the lack of records makes the situation even more fearful.

The thick, wet fog lazily crawling all over the slopes is a rare view of beauty for people who did not grow up in the mountains. Everyone from every walk of life is drawn to the sight of these mighty peaks. Amid all that shimmering romance, live people like Santalachi Subba, in some deep, hidden corner of the terrain, like some long forgotten Queen of the Hills. 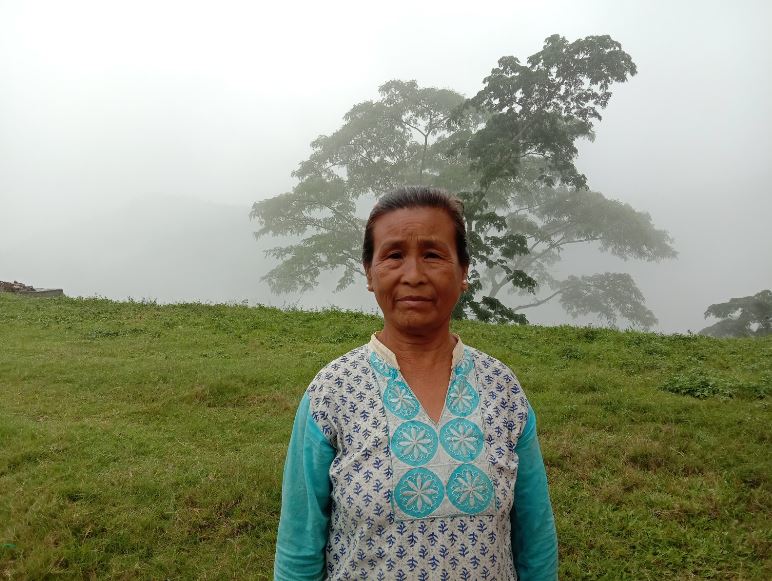 Santalachi Subba, a 58-year-old tea plantation worker, lives in a hut in a corner of the Badamtam Tea Estate near Darjeeling

Last year, Moonlight Spring White tea from the Badamtam Tea Estate became the most expensive tea leaf ever sold from Darjeeling: a cup of it can easily cost Rs.500 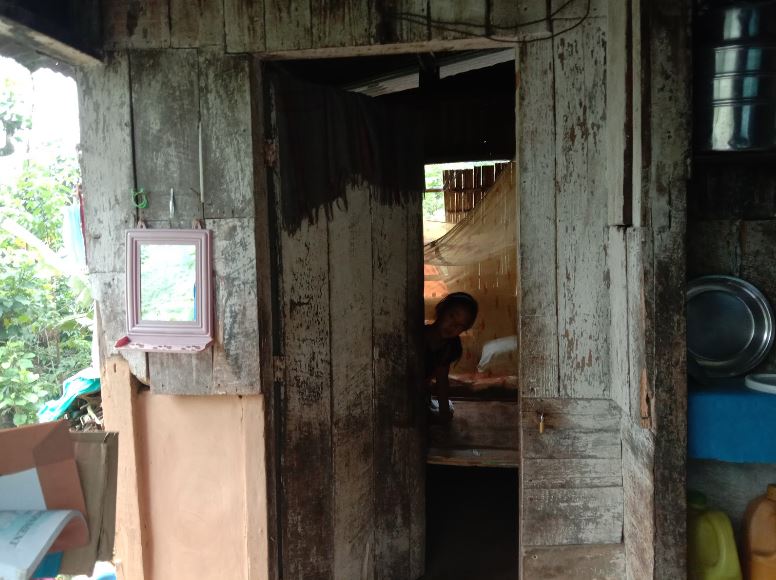 11-year-old Aniya Rai loves maths and wants to become a teacher. She has lived with her grandmother since she was a baby 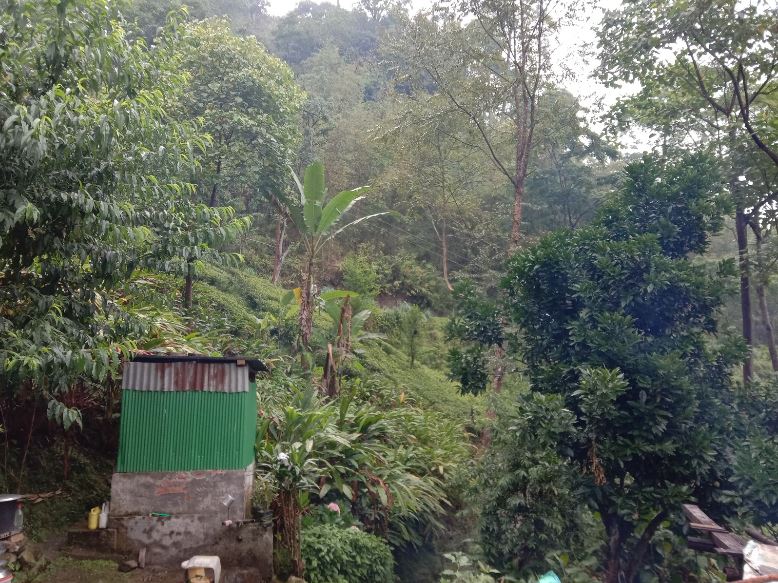 Due to the lack of a water supply, they store water in plastic water bottles. The toilet doesn’t have a door, although it is used by an elderly woman and a young girl 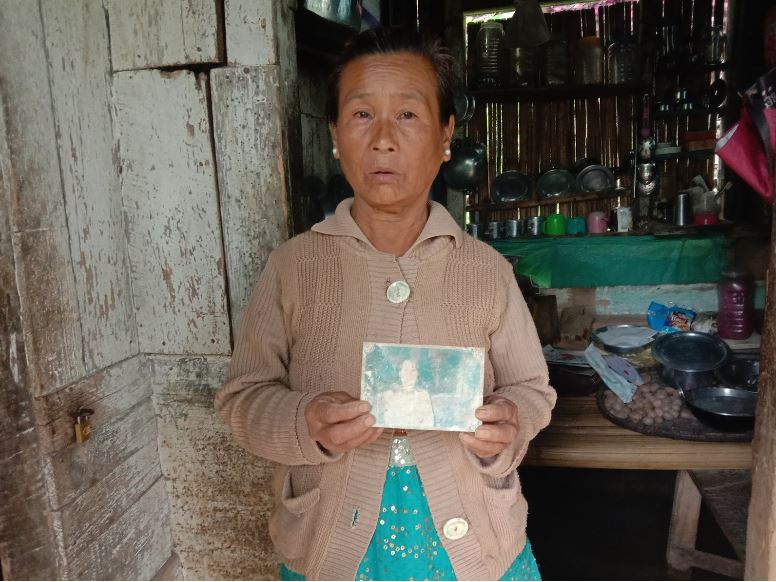 Subba with pictures of her younger daughter, Rachana Rai, who works in Delhi. Her elder daughter was taken away when she was 18, and hasn’t been heard from ever since. She tells us both her daughters are very good looking 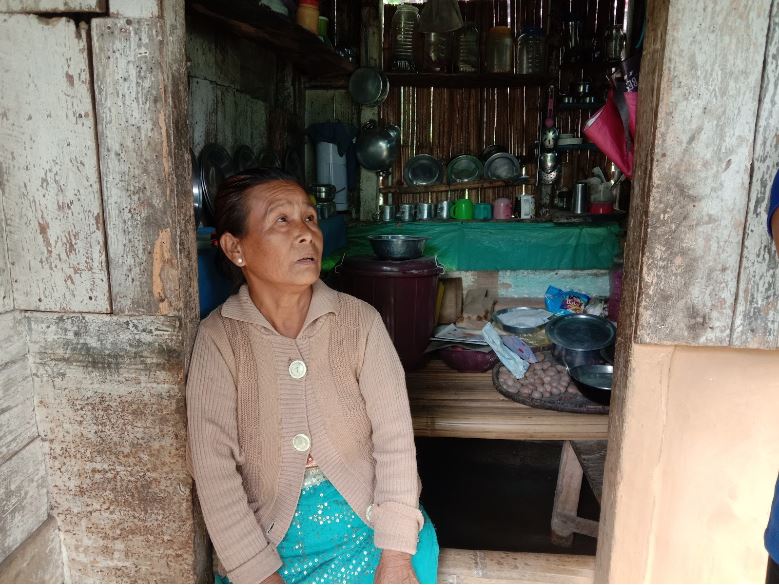 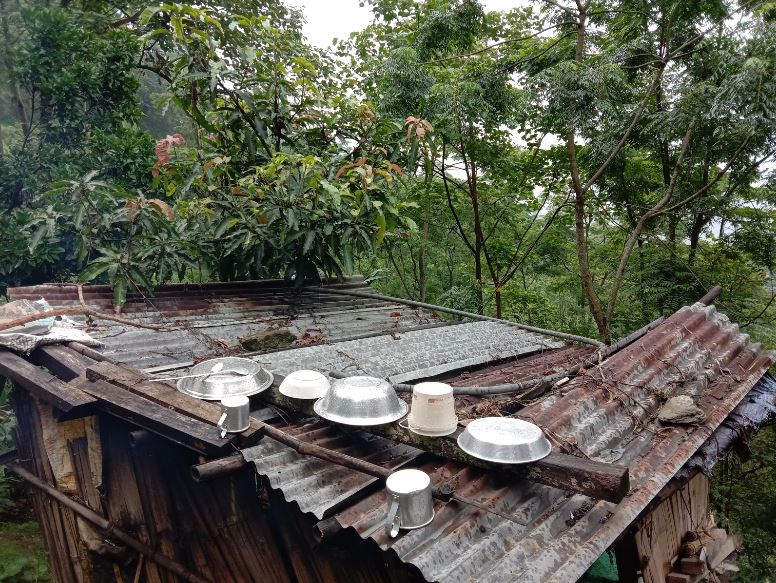 There is no gas stove so they cook on an earthen stove, collecting wood from the garden and stacking it up inside her kitchen, which is right next to the hut 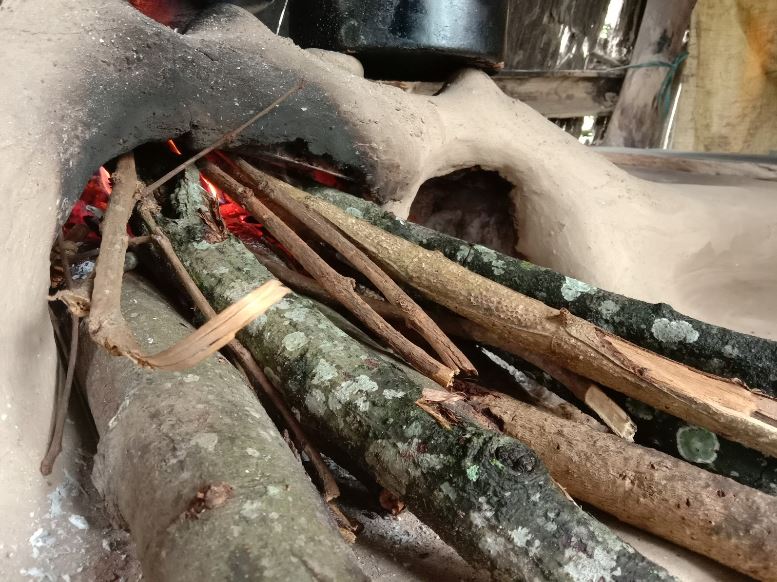 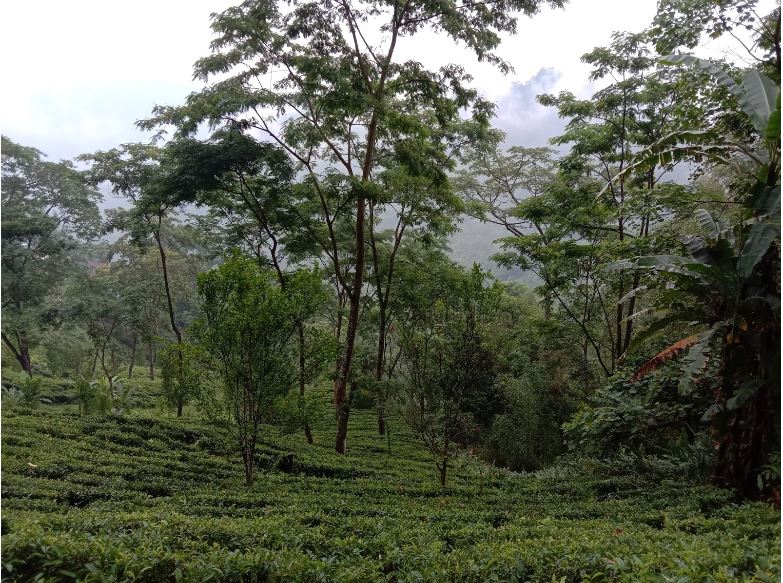 The picturesque landscape is a delusion underneath which hide many dark tales of the tea gardens of West Bengal. Child and woman trafficking are common here. Hardly anyone takes up the responsibility for these workers’ welfare 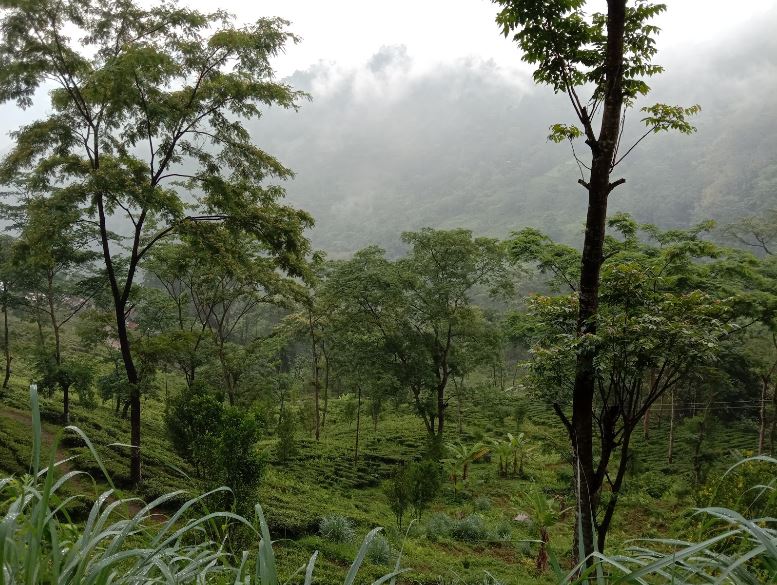 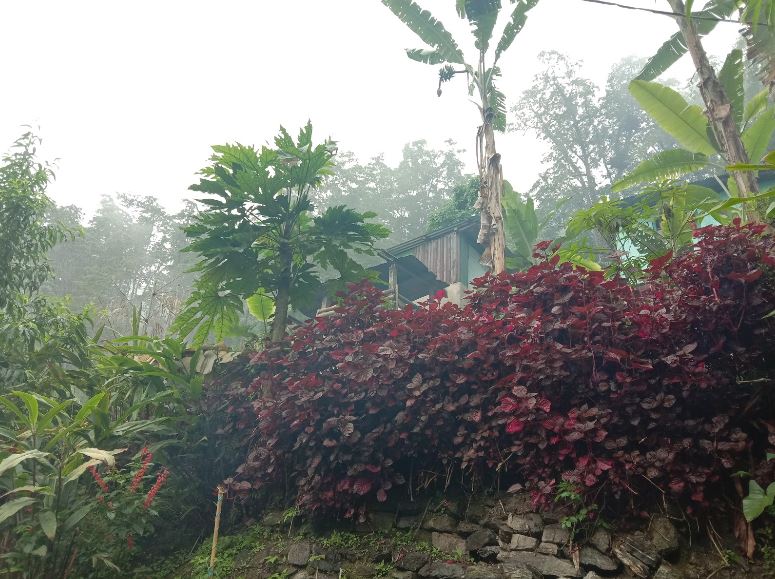 Barnana Hemoprava Sarkar is a freelance journalist based in Mumbai