'Arrey, There is So Much Love Amongst Us All' - Bilkis Dadi

'This is my country'

Bilkis dadi of Shaheen Bagh is now on TIME's list of 100 influential people. Known as ‘dadi’ she became one of the faces of the anti-CAA protest and took great joy in its diversity. Ananya Singh had spoken to her during those days, and wrote the following report capturing the mood and the motivations of the protest that has catapulted ‘dadi’ into international recognition.

Bent over with age and the silence that often comes with it, Bilkis sits with a handful of women, prayer beads in hand, framed against the banner that urges “Reject CAA, Reject NRC” in the background. The image of Ambedkar looks down from its post high above a pole on the makeshift stage. The stage stands empty as of now, waiting for speakers to arrive along with the crowds in the evening. Speeches will be delivered, and slogans will be chanted, words which will reach a crescendo and make the crowds echo in unison.

But it is noon on a Friday afternoon, and Shaheen Bagh is enveloped in a quiet stillness—the local women continuing their sit-in protest undeterred, while men mill around outside the tent, waiting for the call to pray.

The tarpaulin, meant to shield the women from the harsh rays of the sun and cold winds on a winter night, bathes the scene in shades of pink. As we walk in, a quick glance from Bilkis acknowledges our presence; she knows we are approaching her for a conversation as so many others have done.

Deep crevices recording time’s fleeting presence line her face. An amiable visage, furrowed brows and a semi-toothless smile greet us as we seat ourselves before the oldest protestor at Shaheen Bagh. In fact, Bilkis at 80 years of age is somewhat of a celebrity; posters of her adorn the poles and fences in the area while videos of her speaking to journalists circulate on social media.

Dressed in white, with a shawl draped across her shoulder and covering her head, Bilkis begins the conversation by proclaiming assertively, “I was born in India.” When asked about her life growing up, she breaks into laughter, in turn questioning us with gleaming eyes, “What do I tell you about my youth?”

It has been eight years since Bilkis first arrived in the capital. Hailing from a village near Gulaothi, Uttar Pradesh, Bilkis relocated to Delhi after the death of her husband. Back in her village, the family sustained itself through farming. When her husband passed away, she stayed on for a year or two at home before her children brought her with them to Delhi.

The proud mother of five, and grandmother to 11 boys and 8 girls, Bilkis and her family now reside in Shaheen Bagh, while one of her children has stayed on in their ancestral village. “My entire family comes to the protest. My daughters-in-law, my sons, they all come. All the women of Shaheen Bagh congregate here,” she says, looking around at the women gathered close, their ears trained on Bilkis ’ every word.

Like countless individuals, Bilkis has had her own share of trials and tribulations. A leg injury that never healed cost her son his education along with the ability to walk. “His ‘tuition’ had to be stopped,” she says. Today, her son walks with the aid of a "special shoe", Bilkis explains.

“It’s been a number of years since this happened…”, she says, before trailing off into an incoherent mumble, the difficulty of speaking about this unfortunate incident clearly audible in her quiet, wavering voice.

Unemployment, rising expenditure and the economic slump are other problems that weigh heavy on Bilkis ’ mind. “There are so many children unemployed today… My grandchildren have studied. One of my grandsons has done his BA. Now he is sitting at home without any work.” “What do we do?” she asks, raising a shriveled hand to her eyes, shielding them from the stray light making its way into the interiors through a gap in the tent.

Her household is run by her working children. Bilkis , on the other hand, apart from helping her husband with farming in the village, has never worked while in Delhi. “I have never taken up a pen. I don’t know how to read or write,” she says. After a short pause, Bilkis states, “Humein toh kuch bhi nahi aata (I don’t know how to do anything).”

This is Bilkis ’ first protest. “It is everyone’s first protest, not only mine. We had never gotten out of the house before this,” she says. This elderly woman, who has become one of the faces of the Shaheen Bagh protest, said she was never interested in politics before. But when students at Jamia Millia Islamia University—where some of her own grandsons study—were beaten up, Bilkis felt it necessary to break tradition and step out onto the streets along with countless others to raise her voice against the “injustice”.

“We never thought so many people would join the protest. We never even dreamt of it!” Bilkis exclaims. Her disbelief remains apparent. As she reiterates, not in their wildest dreams could the women have conjured up the idea that thousands of people would descend upon Shaheen Bagh in solidarity with them, pushing their local protest into the national limelight.

Did she ever think she would be part of a protest at this age? “No!”, Bilkis proclaims emphatically. Looking down at her hands, the veins clearly visible, she says, “I never thought I would be sitting here at 80 years of age. I am being forced to see this situation today. What can I do?”

Shaheen Bagh has been hailed as a unique, women-led demonstration against the Citizenship (Amendment) Act and the National Register of Citizens. Bilkis disagrees. “Why only women? Women are there, men are also there. Everyone is a part of it. It is not that only women are here, men are also participating. Men stay at the back (at the periphery of the tent), while the women sit in front.” At this point, another resident of Shaheen Bagh sitting behind Bilkis pipes in, “Sahi keh rahi hai, Amma ji (Amma ji is speaking the truth).”

Bilkis does not know how much longer she, along with the other women, will have to sit in protest. Still, she remains adamant that the strength of the women will not fade until there is a “win”. As she says—this is a struggle waged by all religions. It is not a Hindu-Muslim issue. It is an issue for everyone, irrespective of religion.

“In India, people from all religions stay together, but they have defamed us Muslims. Hindu-Muslim, Hindu-Muslim… arrey, everyone is with us! 500 Sikhs came the other day. If there was no mohabbat between us, would they have come and stood with us, supported us?”

“This is what the world has come to…”, the 80-year-old protestor proclaimed, her voice soft and barely audible amidst the cacophony of protesting mothers trying to shush the screaming babies in their arms with indulgent expressions, while their adolescent offspring chase each other under the awning.

“We continue to sit here with our faith in Allah”, Bilkis says, a note of finality in her voice as she picks up her prayer beads once again. 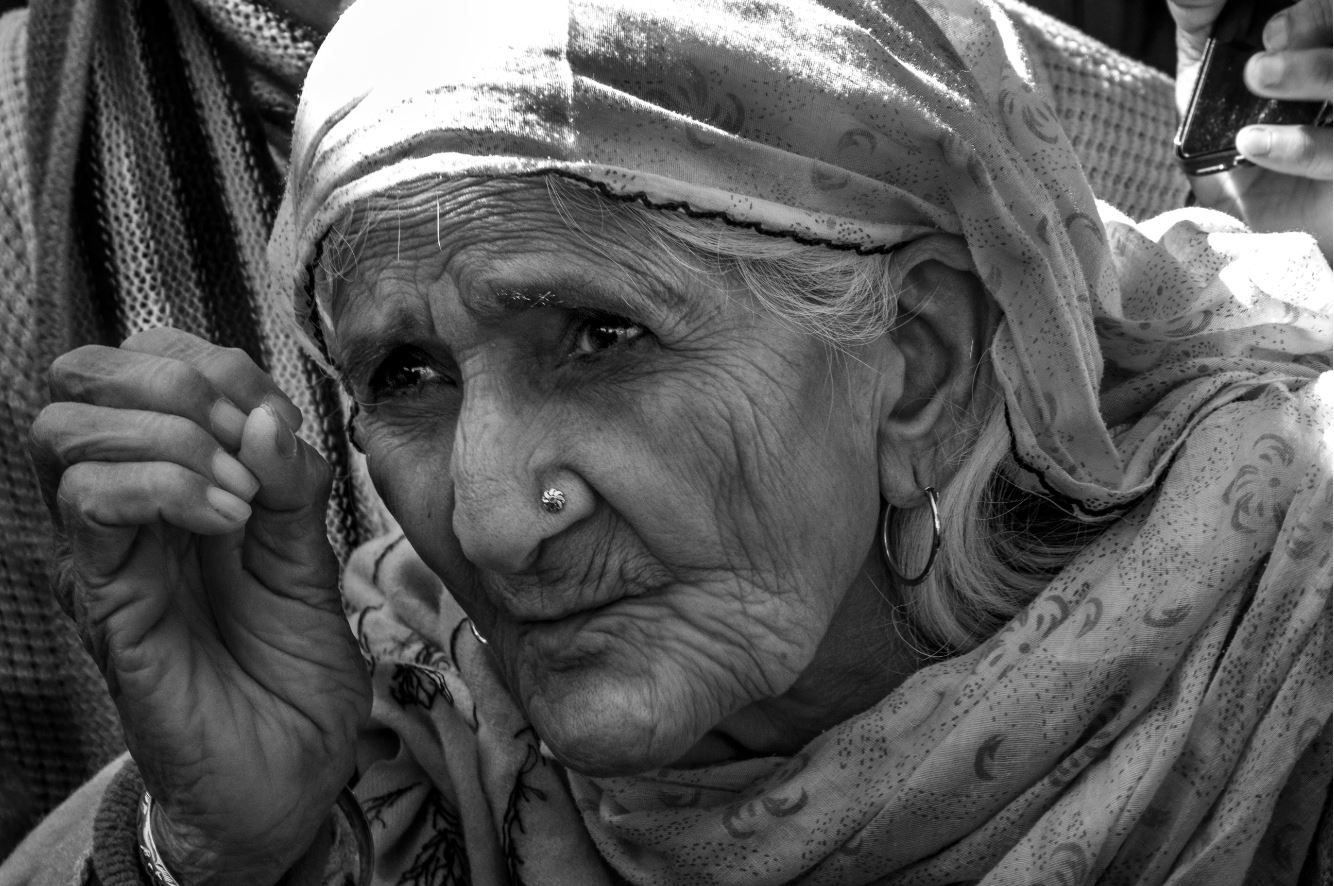