Women cultural artists are playing an important role in the ongoing farmers agitation, joining their protests over the past two months, and travelling with them with songs and plays to cheer them on.

These energetic and talented women generate awareness about the movement as they go from village to village, reminding the people through songs and plays, about rights and democracy.

Braving the piercing cold, they have left behind the comfort of home for the cause they are deeply attached to. They eat in the langars, sleep on tractor trolleys, as they mark their attendance in this “historic peoples movement”. For them it is a learning lesson on “peoples rights and democracy” and they plan to stay till the very end.

“We have been associated with the movement right from the beginning. We travelled across every district in Punjab performing plays telling the people why these laws are not people friendly. We gave 51 performances before landing here on Delhi border on November 26,” Reshma of Bhotna village in Barnala told this reporter on the Tikri border. She is accompanied by three members of her Azad Rang Manch troupe.

“In the last four days the shows have increased as the demand keeps increasing. Our participation in the agitation had started from a Dharna at a toll tax plaza near Barnala. We were writing impromptu scripts at short notices and performing all over Punjab. We began with plays on the partition of India and completed the journey to the present juncture through performances tackling burning issues like the lockdown, the struggles of the working class and the farmers along with the politics of divide and rule. We are having a comfortable stay here as our brothers from Haryana are extending all help to us,” Reshma added.

“My journey with this movement began with a performance at a Dharna at a toll tax plaza near Kurali on Chandigarh-Ropar highway. I have been singing songs written by Sant Ram Udasi, Amar Kavi, Raj Kakra and Paash. We have been accompanying friends who have been performing plays across the villages in Punjab and today I am staying with artists from various universities who have joined the morcha,” Jagjit Kaur of Bhawanigarh near Sangrur said as she sat at the Kundli border in Delhi. She is popularly known as ‘Nikki’ or the little one and is often seen singing at most of the people centric events in Chandigarh and elsewhere in Punjab.

She gets tremendous applause when she breaks into the song ‘Jad takht te baitha hakim bola hove’ (When the ruler sitting on the throne in deaf) that has been written by Amar Kavi.

“Although it is a recorded song but still it touches the heart of the masses. I have been lucky to get recognition from the writer of the song. I have also been singing Paash’s ‘Lehran ban utho’ (Rise like waves). This has been a very special phase in my life, something I will cherish having participated in this important event. It is the biggest agitation that I have seen. One loses the count of tractor trolleys if one looks at their numbers on the road. Ad this is just at the Kundli border. The scenario is the same at every entry point,” Jagjit Kaur said.

“It is a great learning experience as people from both Punjab and Haryana are standing shoulder to shoulder in this fight. There is no difference, just plain unity. They understand that these laws will spell doom for the farmers,” she further added.

Jaspreet from Mandwala village in Faridkot district is also standing by at the Kundli border. Jaspreet too has been giving her voice to songs about people’s struggles as she accompanies the farmers. It is again the songs from Sant Ram Udasi and Raj Kakra that this girl who is pursuing her doctorate in political science at Punjabi University Patiala, sings. Incidentally the topic of her research is ‘Women’s participation in political movements’, something she herself is now part and parcel of.

“I began singing at the dharna at the Dheri Jattan village on Patiala-Rajpura road. Initially I felt a bit uncomfortable since there were hardly any women agitating at toll plazas. But this discomfort was soon over and I realized that we are equals in this fight for our rights. There is so much love and warmth we are getting from the common people around us that I have quickly adapted to the life here ,sleeping in tractor trolleys and eating the food being prepared at the roadside,” Jaspreet said.

Jaspreet added that she is seeing what she has been reading in books getting translated into reality, something which is very essential for a research student. “We keep on reading in theory that political consciousness peaks when it is the people who start leading the leaders. This is what is being happening here as it is the common people, the farmers who have been telling the leaders of the farmer organizations how to move ahead. I have learnt so much while being a part of this movement,” she added.

One of the unique aspects of the ongoing farmers’ movement has been the fact that this is perhaps the first people’s movement against the corporate model of growth in India.

This is why the protests at the toll tax plazas and outside the plush shopping malls along with the petrol pumps run by corporate entities will go down in history as the people’s fight against the corporate model that has promoted disparity and inequality in a developing country. Punjab has made a big start in this direction with these young women singing their way into every heart. 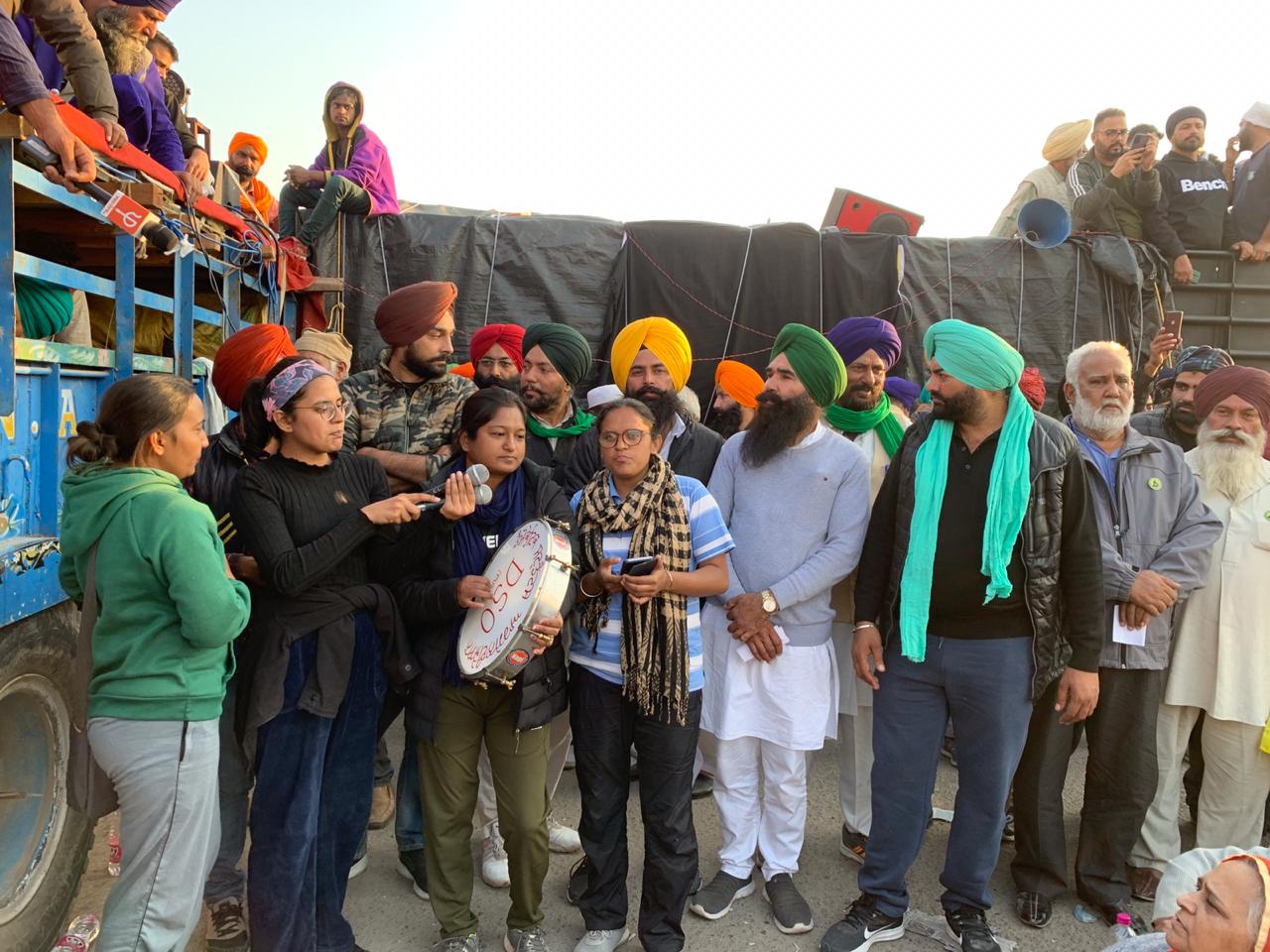