NEW DELHI: “He opened the string of my salwar, undressed me and forced himself, while I was sleeping on the streets. I don’t have a place of my own or money to sustain myself, I’m starving since the lockdown. Even the government didn’t provide a helping hand during the pandemic,” says Pinky Kinnar, a 25-year-old trans woman who lives near Rajghat.

“People treat us like a piece of trash, as if we are not one of them. I am left at the mercy of God. Am I not human? Don’t I have the right to live a dignified life?

“I am in trouble.” As her voice trembles with emotions she says, “Madam, can you please help me.”

After interviewing around 25 trans women at different locations in New Delhi, with a friend Uzma Imran, we were surprised to learn that none of them believe in the existence of the deadly coronavirus. Therefore, most of them do not wear masks. If they do put on one, it’s only from fear of the cops.

Covid-induced restrictions on mobility have increased the challenges faced by these trans women, who regularly encounter verbal or sexual abuse. Often identified as hijras, aravanis, kothis, kinnars or sakhis, often pejoratively, ‘social distancing’ may not be new to them. The socially sanctioned discrimination perpetrated on them amounted to social distancing long before the pandemic.

They are predominantly dependent on social interactions, and have a sanctioned social role of blessing newlyweds, baby showers with their claps, also called badhai. Many of them live together in communities under the guidance of a guru, a mentor, in households called gharanas.

Cis society excludes them, denies them employment, education and medical care. So many must depend on begging and paid sex to earn an income.

The first-ever study on the rights of trans people by the National Human Rights Commission in 2018 found that 92% are deprived of the right to participate in any form of economic activity in the country, with even qualified people being refused jobs.

After the work of decades in 2014 trans people in India gained legal recognition as a third gender, but even during the economic crash last year the Union government’s stimulus package it said amounted to USD 22 billion left out this targeted community.

They had to rely on local community-based organisations and various NGOs to survive. They remain the worst hit.

“My landlord asked me to vacate the room as I had no money to pay rent. It took me about eight days to reach Muzaffarpur on cycle. I made short halts in between when my legs couldn’t bear the pain after swelling. I slept on railway stations and footpaths. Sometimes, I would sleep while cycling. On several occasions I felt like taking my life,” recalls Puja Kinnar.

29 years old, Puja pedalled her way from Delhi to Bihar amid the Covid-19 lockdown.

After interviews with Pinky, Puja and several others I think gender sensitisation and legal reform should work in parallel. Cisgenders and cissexuals should inform themselves about the legitimate existence of transgenders. They should feel as free and empowered in their public and private lives as anyone else.

How would you feel if your genitals were the subject of public debate? Why the stereotype, prejudice, double standards, and hypocrisy?

While I appreciate the concerns for protecting the cis woman, I would only hope that we have the same concern for transgenders, who deal with indecency and assault in their day-to-day lives. 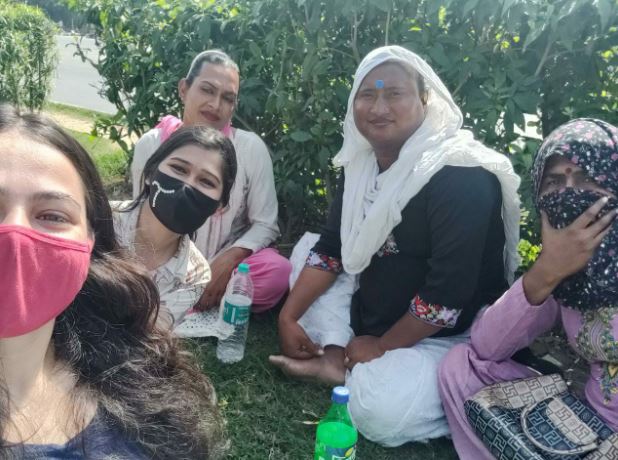