Leela, a young Dalit woman, was gang raped by three dominant caste men from her village in India’s northern state of Haryana. One of them was the Sarpanch, the elected head of the panchayat - the village council responsible for local self-government. When Leela went to the police station to register a criminal complaint about her assault, her rapists were waiting there. Instead of providing protection, police officers stood by and watched as the men threatened to sexually and physically assault Leela again, and the Sarpanch warned she would be banished from the village if she tried to press charges.

Leela turned to her family for help but received none, and her husband declared he would divorce her unless she agreed not to pursue her case. Without support from either the police or her loved ones, Leela was left with no chance of obtaining justice and her attackers faced no repercussions for their terrible actions.

Official statistics from India’s National Crime Records Bureau indicate that almost ten Dalit women are raped every day across the country. In Haryana alone, there were 221 rape complaints filed by Dalit women and girls in 2019. However, this is just the tip of the iceberg, with Leela being one of untold others not counted in official statistics because their attack was not recorded by the police.

The true extent of sexual violence against women and girls in India - especially those from Dalit communities - is both alarming and appalling, with one estimate approximating that over 90% of sexual assaults go unreported.

Even for the fraction of survivors who are able to file police complaints, it is only the beginning of a long and arduous quest for justice. A recent report by women’s rights organisations Swabhiman Society and Equality Now, Justice Denied: Sexual Violence and Intersectional Discrimination, examines the multiple barriers to accessing justice encountered by Dalit women and girls in Haryana.

The report draws on Swabhiman Society’s experience of providing legal support, counselling and other services to Dalit survivors of sexual violence, and gives analysis on 40 rape cases supported by the organisation, examining the criminal justice system’s response in each instance.

In almost all the cases studied, victims and their families who sought legal justice for rape were subjected to extreme pressure to stay silent and not pursue criminal prosecution. This includes being subjected to stigma and victim blaming, threats and bribery, retaliation, and further violence.

Over 80% of survivors were forced to deal with their case through unofficial village councils (khap panchayats). Through this local political system, economic, social and political clout was frequently applied to intimidate and coerce survivors into staying silent or refraining from pursuing criminal charges.

Almost 60% of survivors were forced into compromising their cases. “Upper” caste perpetrators and members of their families commonly subjected plaintiffs and their relatives to threats and demands to drop all legal action and instead accept an extra-legal settlement.

Patriarchal and caste power structures compel women and girls to agree, with settlements reached outside the parameters of the law and negotiated by community members including the perpetrators and their supporters. Further, survivors don’t always receive the compensation promised under these extra-legal settlements.

A third of survivors were forced to move away from their neighborhood or village after being raped, often along with their families. Of those who remained in the same location, most were only allowed to do so if they accepted an extra-legal compromise.

In addition to withstanding immense community pressure, those women and girls who persevered against huge odds to continue seeking legal justice hit further obstacles within the criminal justice system – the very system meant to provide aid and protection.

Police officers regularly refused to file complaints or were slow to act and failed to investigate allegations. Police also subjected survivors to caste-ist and misogynistic abuse, and did not provide them with adequate protection even when threats of violence and retaliation were made by the accused or their advocates.

Health personnel failed to provide counselling or psycho-social care, and in some cases further victimized survivors by subjecting them to the prohibited “two finger test”, an intrusive vaginal examination in which a medical practitioner inserts two fingers into the vagina in an attempt to determine the laxity of the muscles and whether the hymen is broken. Performed on the premise that it is a way to determine a victim’s sexual experience, the test is unscientific, traumatizing, and illegal since India’s Supreme Court has ruled that it is a human rights violation.

Throughout the entire legal process, survivors lived in fear - for their own safety, of losing access to their livelihood (often controlled by dominant caste communities), of being forced from their homes, and of facing caste-based abuse and discrimination from police, prosecutors and other officials in the criminal justice system.

Trials dragged on for years in contravention of strict time limits set in the law for the processing of cases. And despite money remaining unspent in Haryana’s victim compensation fund, government officials refused to pay out compensation that survivors were legally entitled to.

Out of the 40 rape cases featured in the report, in only four instances had convictions been secured for all the accused standing trial, and these involved the murder of the rape victim, or the rape of girls under six-years-old. In the other 90 percent of cases, in which the violations were not deemed as extreme and grievous, perpetrators went unpunished.

The horrific gang rape and resulting death of a 19 year-old Dalit woman in Hathras in September 2020, the mishandling of her case by state authorities, and the charging of four men from a dominant caste, provoked widespread outrage and protests. The issue of caste-based sexual violence was thrust into the limelight, sparking a national conversation about caste atrocities against Dalit women and girls.

This reckoning with deep-rooted caste-ism and patriarchy is long-overdue and is an extremely important turning point that must lead to systemic change.

The brutal treatment of the Dalit women and girls involved in the cases in our report demonstrate that what happened to the young woman in the infamous Hathras case is not an isolated incident or anomaly in India. Dalit women and girls throughout the country are routinely targeted and abused by dominant caste men. They are then further victimized by being systematically silenced and repressed, with cases thrown out by a legal system that does not care to protect their interests.

This shameful injustice fuels further sexual and gender based violence. Dominant caste perpetrators rely on impunity from a system that often protects rapists over women and girls who bear the burden of intersectional discrimination stemming from their disadvantaged sex, caste, social and economic status.

The media attention sparked by high-profile cases plays an important role in focusing public attention, holding duty bearers to account, and providing opportunities for survivors, family members and activists to speak out. But all too often the news cycle soon turns to another story and no meaningful change occurs. We need more than fleeting flashes of public outrage, empty promises or platitudes. Nor will token amendments in the law suffice.

Laws on sexual violence need to be effectively implemented to protect caste minorities and uphold police accountability. More funding should be provided to programs aimed at preventing sexual violence, support services for survivors, and to women’s rights organisations and activists working on these issues. Also crucial is addressing impunity for perpetrators of sexual violence, particularly those whose position in society allows greater possibility to escape justice.

The evidence in our report is clear – Dalit women and girls are being failed and it is time for Indian government to fulfil its legal and moral duty. This requires making a long-term commitment to addressing caste and gender issues and enacting holistic structural reforms so that those subjected to sexual violence get the justice they are entitled to and deserve. 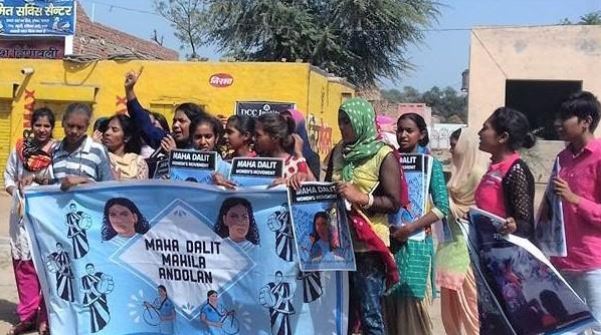