'Yeh Badnaam Jaga Hai, So No One Cares' - Sex Workers Struggle to Survive the Pandemic

Pandemic impact on sex workers and their children

Rukmani is standing by the window, looking at the busy traffic outside her dimly lit room in the 70-year old, four storied brothel on GB Road in Delhi. She has been working here as a sex worker for 26 years. However, “The pandemic has shut down all business. There are no customers. I am even struggling to pay rent and provide food for my family,” she said. The 48 year old worker from Rajasthan has two children, an aged mother and a husband to support.

There are over 6.6 Lakh sex workers in India according to a 2016 estimate by the United Nations. Over 1.3 lakh are from Delhi, Maharashtra and West Bengal, according to the National Aids Control Organisation. Out of which over 1200 reside at GB Road, according to Kunal, a 19 year old grassroots leader at Light Up, Emotions Matter Foundation, a non profit organisation that works with children of sex workers.

Some of the older sex workers have been hit hardest by COVID-19 as compared to their younger counterparts.“We are old so no one comes to us. Clients say they want younger girls and we can’t force them to come,”added Rukmani. The government has failed to provide sex workers with any help. In addition to that, the police try to take away the little money these women have earned, according to her.

Rukmani has also been taking clients for as low as 100-150 rupees after the pandemic hit, which she would never do earlier. “We have to take up men who we don’t want and who pay low, just because we have to feed ourselves,” she added. Even though the workers maintain sanitation and wear masks, they are scared for their life while doing in-person sex work at the time of COVID-19.. “But we do not have an option, “ said Rukmani.

The stigma around sex work and workers makes it even harder for the women to work.“Nobody sees us with respect; they think we live on GB Road, in a filthy place, They gossip behind our backs, '' said Rukmani. “Our heart feels sad, if we were from a ‘respectable' family, then people wouldn’t look down upon us.”

Findings of a new research indicate that more than 90% of commercial sex workers in three states - Delhi, Maharashtra and West Bengal, are facing the prospect of permanent debt bondage by the end of this year.

The research, conducted by Dr. Beulah Shekhar, Emeritus Professor of Criminology at Karunya Institute of Technology Sciences (KITS) in Coimbatore, Tamil Nadu, examines the financial exploitation the community faces in the aftermath of Covid-19 pandemic. The Supreme Court passed directives for sex workers to receive dry rations and other benefits without insisting on proof of identity through documents on 29 September 2020, according to a report by Economic and political weekly. However,“The only food and rations we have received is from people around us, and nothing from the government, said Meenakshi, another sex worker living in a brothel. Meenakshi has not been able to get any government aid despite having all valid identification. 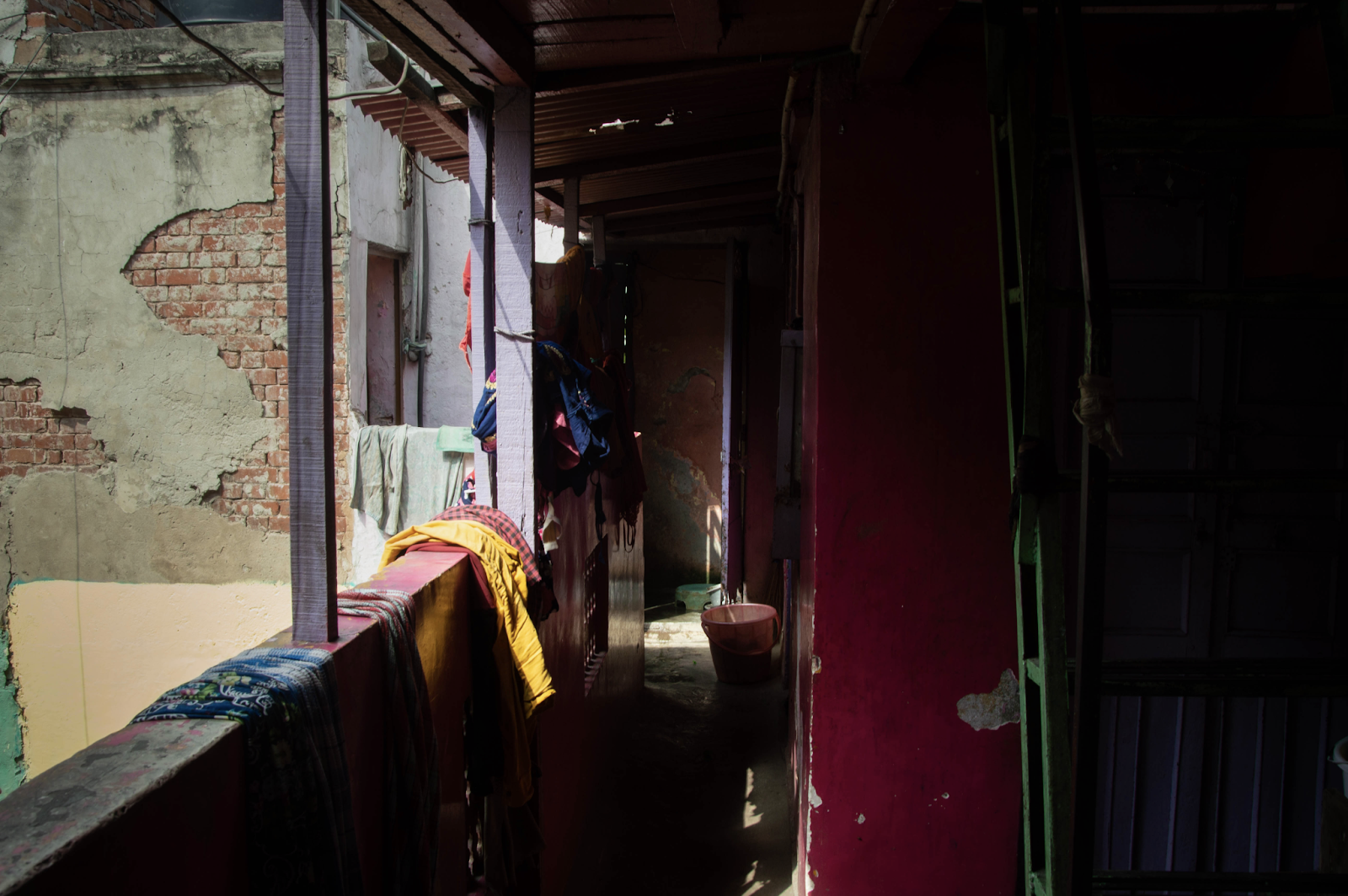 
Although sex work is not illegal in India, activities such as maintenance of brothels or soliciting customers are punishable offences, according to this report by One future collective. The study observes that Immoral Traffic (Prevention) Act, 1956, that makes it illegal for 2-3 sex workers to work together, forces them to work individually, making them more vulnerable to exploitation.

“They want to shut these brothels but they don’t want to help us, '' said Sunita, a 60 year old living in one of the houses at GB Road. There are 98 brothels in this area, according to Kunal. “Ye badnaam jagah hai (The place is infamous for its work), so the government doesn’t care about us. Where should we go,” she added 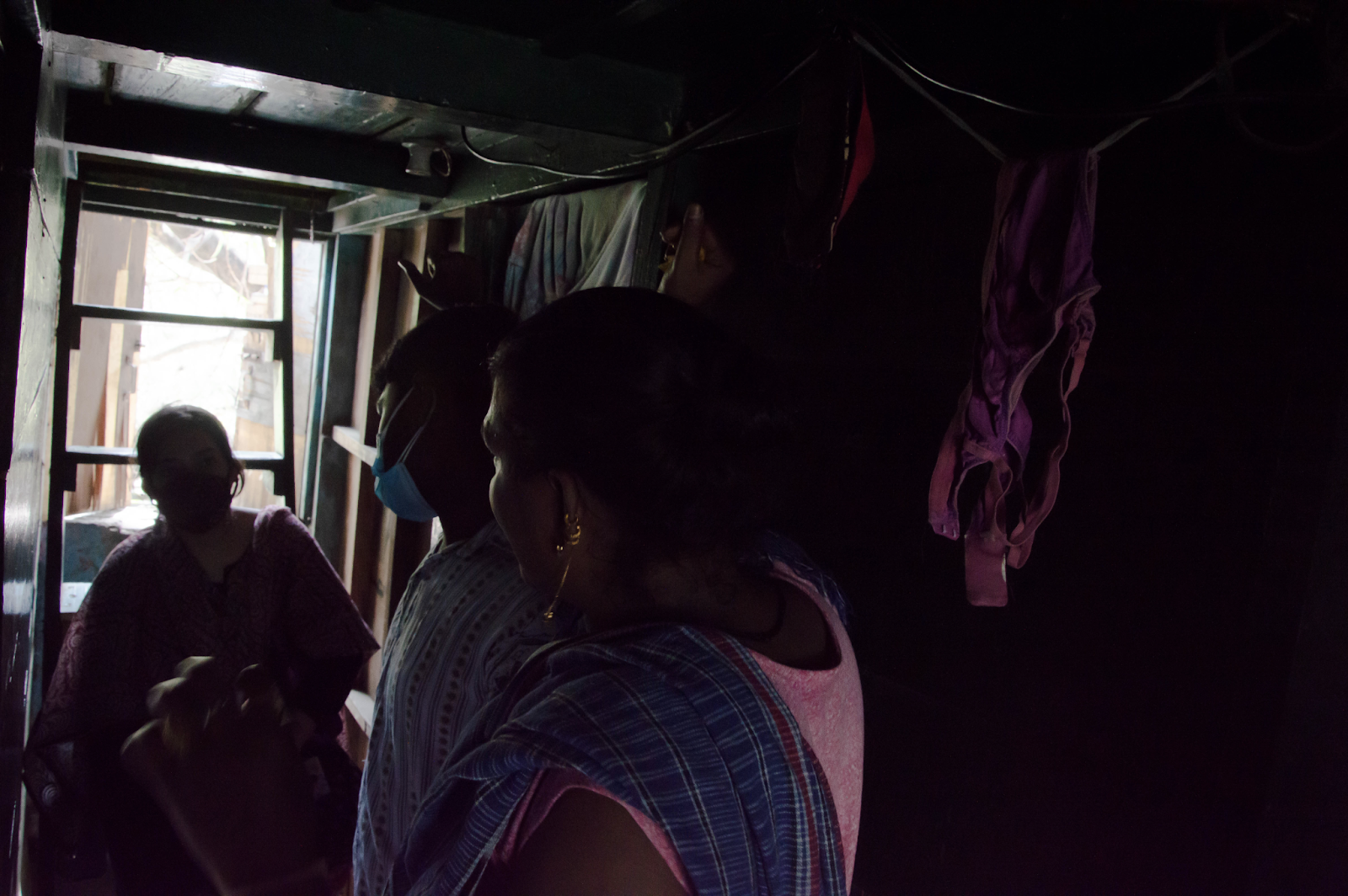 
These homes also provide a sense of community for the women who live here. They spend their free time with each other, share their sorrows, help each other financially and protect each other from unsafe clients, said Manju, another sex worker. “We live here as a community and don’t discriminate amongst each other. We also take care of each other’s children and lend and borrow as we need,” she added.

In one of the open courtyards in the building, three friends, two of them with bright makeup and clothes, sit on chairs right in front of the entrance, waiting for customers. These women are younger than their colleagues living next door to them. They have had better luck at finding customers than the older sex workers. “Work has been picking up very slowly after the lockdown but it has been nothing like before, said Cherry, a 40 year old sex worker. Cherry is the sole earner in her family. She wakes up every day, bathes, cooks, and gets ready for work. She has the same schedule every day. “I just have one dream, I want a shop of my own which I run. If I ever get out of here I want to do that, she said.”

Zarin, a 28 year old is the youngest sex worker in the house and has a 10 year old son. She is scared of the lockdown coming up with the anticipated third wave of the Covid 19 virus. “We completely shut business during the lockdown. We also have kids, we are also scared for their lives,” she said. Zarin also wants to own her own shop of women’s clothes when she gets out of the brothel, she said.

CoronaVirus is the only thing that scares these women. “Our main problem is Corona. Nobody can control us otherwise. We live and stay the way we want. We decide our own fate. Who can stop us?” Said Vineeta, 40. She wants to open a parlour and dress up other women.

The cycle of getting into sex work is intergenerational in nature. It is carried forward by the children, said Juhi Sharma, the founder of LightUp. LightUp’s focus is on intervening with older children in the sex work community to break this cycle. Light Up wants to equip these children with skills to lead their families out of the trauma they have gone through, said Sharma.

Various sex workers send their children away to hostels or leave them back home in the villages they come from. But many children live and grow up within the community. Kunal, who works as the grassroots leader at Light Up, is one such boy. 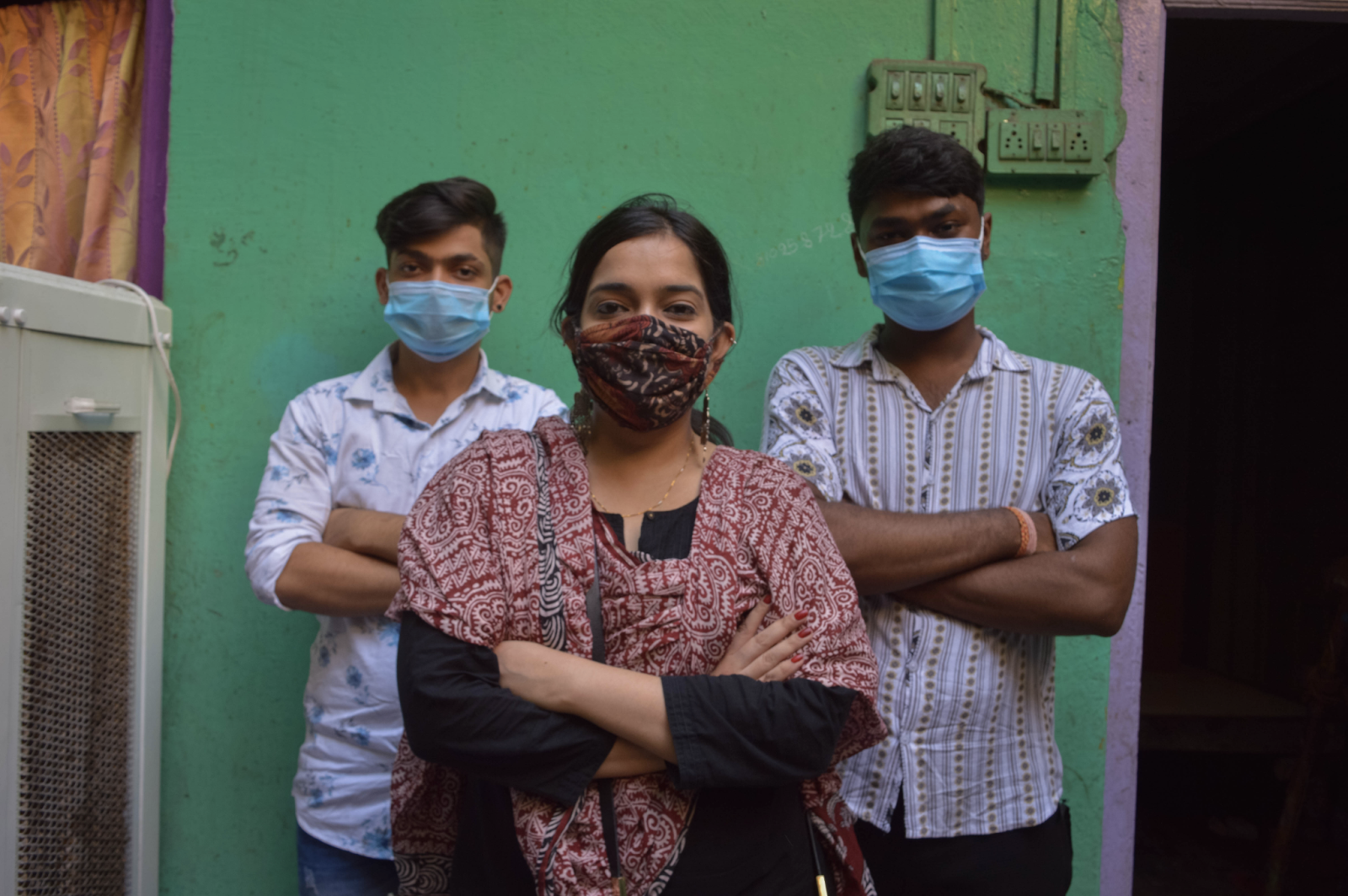 
The biggest problem in the brothels is that children are unable to go to school. This is primarily because they are scared of being judged for their background and their mother’s profession, he said. There are over 100 children living in the brothels at GB Road, according to him. “The name GB Road itself is very strong, it leads to people thinking a lot of bad things about the people who live here,” he said.

The kids who live in the community have not been taught how to accept the work their parents do. “I used to blame my mother too,” said Kunal. “I have changed over 6 schools just because other children would talk about my mother, '' he said. Kunal has now come forward with the aim to support the various women and children. He wants to break this chain and give his mother and the other women he calls family a better life and living conditions, he said.

Akash, an 18-year-old, who also grew up with his mother in the brothel has just completed his 10th standard and is now staying at home because his schooling has stopped because of the pandemic.

“I have not told where I live or what my mother does in school,” said Aakash. He wants to do social work when he grows up and support his family. “Kids bully you when they know you live on GB Road. They talk about us and our mothers in a demeaning manner,” he added.

He lives with his brother and parents on GB Road. He also works with LighUp as the field leader, helping the organisation understand sex workers community better.

“The way we label sex workers is disgusting. The work is considered low. 'I want to change that when I grow up,” he added. 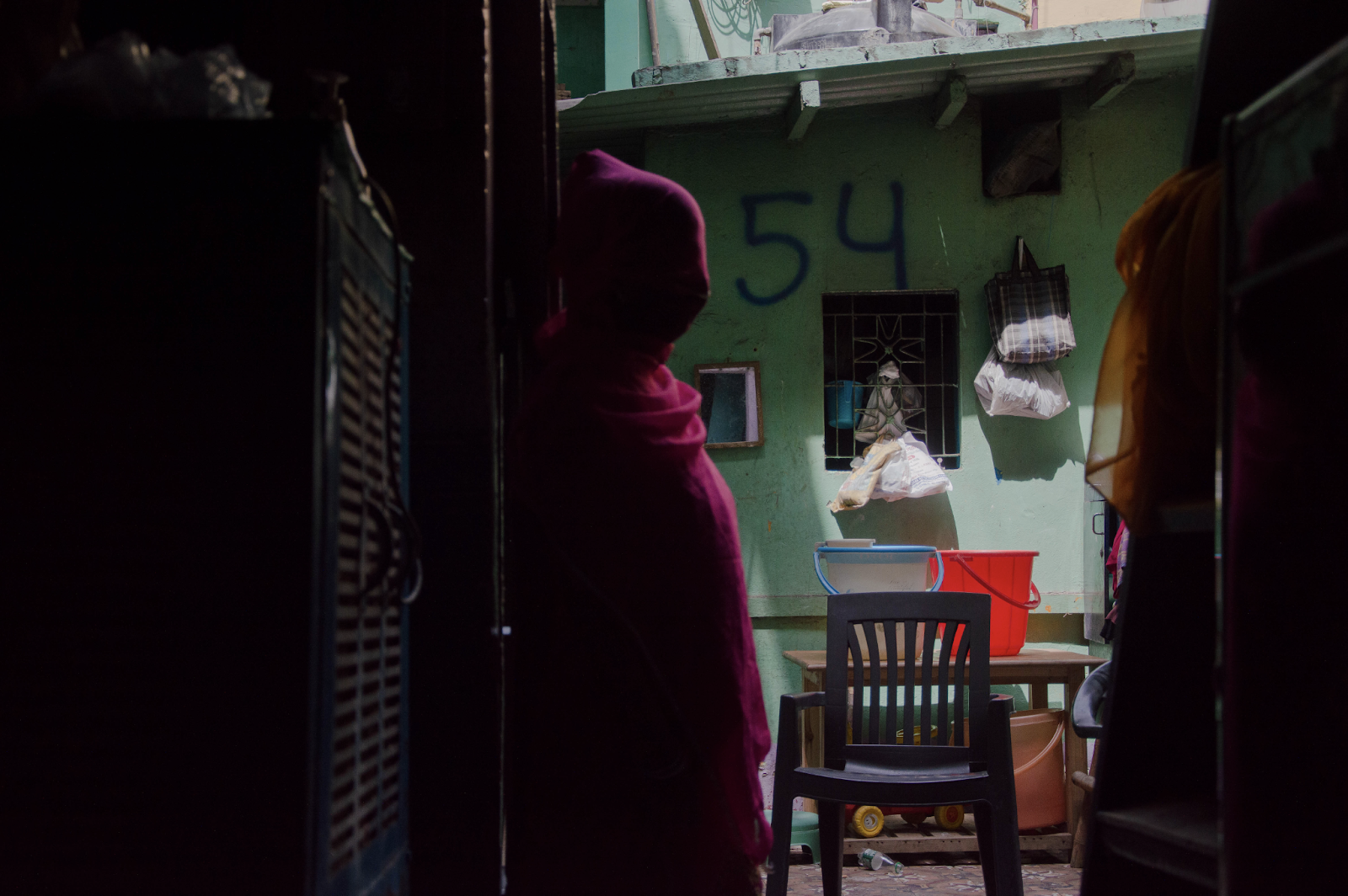 Rukmani, a 48 year old sex worker has stopped getting any work since the pandemic started