Trust our very own Ayushmann Khurrana to break new ground with every other film.

The number of social taboos that extend to films he has broken with his path-breaking performances can well become the subject of a complete book. He began his illustrious career with the box office hit Vicky Donor which explored the till-then ‘silent’ subject of semen-donation for childless couples.

In Badhai Ho, he is a young man engaged to be married, taken by the most unpleasant surprise when he discovers that his middle-aged mother is pregnant.

Shubh Mangal Saavdhan shows him portraying a young man engaged to his girlfriend discovering that he suffers from erectile dysfunction.

In Bala, he plays a young boy who laughed at his young teacher who was turning bald to grow up into baldness in his own youth.

In Andhadhun, he is a ‘blind’ pianist trying to solve several murders at one go.

It is only in Article 15 as an investigating officer that he gets to play a normal role of a crusading police officer trying to nab the rapists of three Dalit girls based on a true story.

In Chandigarh Kare Aashiqui, Khurrana has gone one better. He is portrayed as a strong man who faces the very serious issue of falling in love with the beautiful Maanvi Brar (Vaani Kapoor) who has gone through sex reassignment surgery. More of this later.

Manu is quite affluent and lives in an extended family with his grandfather (Anjaan Srivastava), widower father (Girish Dhameja) who has a secret girlfriend he cannot marry till his marriageable son ties the knot. But Manu has no plans of marriage before he wins the challenge of Gabru of the Year which he has been losing every year.

He is driven crazy by his single sisters, Preet and Meet who make his life miserable with their constant nagging to hitch on which extends to their joining the Zumba class in his gym. Why they have remained single in a traditional and very affluent Punjabi family remains a mystery.

Into this girlfriend-free world Mannu is very proud about, steps in the svelte, modern, elegant and fashionista Manvi Brar), as a trained zumba instructor. Zumba is a total-body cardio and aerobic workout, which provides a large calorie consumption. This was innovated in 2001 by Alberto "Beto" Pérez, Alberto Perlman and Alberto Aghion.

Manu and Maanvi not only fall in love after a few meetings, and even have torrid sex where we hear Maanvi say “thank you” once. We get to learn that she is a trans girl and the “thanks” was for her having discovered her ability to have normal sex with a man.

Manu, shocked out of his wits, not only accuses her of cheating him but also feels so repelled by this truth that he throws up. Maanvi shows him her early pix on her cell phone when she was a boy but Mannu is not convinced. He does not even know what a trans girl is because he has never even heard the term “trans” before in his middle-class background where English did not have a place in his school for him to understand this.

This is the first ever Hindi film to tackle the issue of romance and marriage between a trans-girl and a mainstream man. Rituparno Ghosh earlier tackled sex reassignment surgery in his Chitrangada – The Crowning Wish but never within Hindi cinema.

Mannu in the present film, after ditching Maanvi very badly, goes through the entire Internet search sites complete with graphic descriptions to learn everything about what SRS is all about and when he again tries to make amends with Maanvi, it is she who turns him away, and she has every reason to.

She has a broken engagement behind her sex change and her mother has shifted to her brother’s place as her way of protest against her only son-turned-daughter’s sex-change choice. Her father, a retired Brigadier (Kanwaljeet Singh) is the only man who stands solidly behind her while she tries her best to seek her own space and identity against a world that rejects her choice. Her only friend is a candidly frank lesbian girl who wears her sexuality bravely on her person and is beside Maanvi every step of the way.

Sex reassignment surgery is a long-term, delicate and complex process that has deep emotional and psychological repercussions not only on the person undergoing the surgeries but also on the people he is closely related to such as his parents, his colleagues in the dance troupe, his friends and most importantly, Partho, his lover. Sex reassignment surgery from male to female involves reshaping the male genitals into a form with the appearance of and, as far as possible, the function of female genitalia.

Prior to the surgeries, trans-women usually undergo hormone replacement therapy and facial hair removal. Other surgeries undergone by trans-women may include facial feminization surgery and other procedures. These usually begin with breast implant and end with vaginal reassignment.

Without getting into meticulous, scientific details of these series of surgeries, director Abhishek Kapoor manages to blend entertainment with a social agenda, by building a typical Punjabi family story and marrying this to an unusual but well-structured love story between two social and clinical unequals using some melodrama to arrive at a happy closure acceptable to all.

The acting by all the members of the cast helps in binding the film together and investing it with an ambience of brotherhood and solidarity across the map. But in this case, more than the wonderfully macho Ayushmann Khurana who wears a ponytail along with his biceps, ripping muscles and thighs complemented with his versatile performance, this critic would like to hand over the prize to Vaani Kapoor not only for the way she convinces with her many-layered performance but more importantly, for the courage of her convictions in accepting the role of a trans-girl which I do not imagine any Bollywood actress would have had the courage even to consider.

She looks beautiful too, elegant in her fashionable costumes and her slightly horsey face, raising her acting to a level that takes us by surprise considering this is perhaps her first role as the female lead. The twins who work with Mannu in his gym, played by Gaurav Kapoor and Gautam Kapoor are hilarious, and add a lot of humour to the otherwise serious story.

Tanya Abrol and Sawan Rupowali as Mannu’s sisters are funny and affectionate and suffocating in turns, adding to the entertainment value of the film. The song voiced by Aysuhmann on the soundtrack forms a very good backdrop to the pace of the film.

The cinematography (Manoj Lobo) is glamorous and colourful that fits neatly into the ambience while the editing races and cuts back and forth between and among the many worlds of Mannu and Maanvi. The film through its meticulously planned production design (Bindiya Chhabria) also offers us an insight into what a hard-core gym looks and functions like which few films have cared to show.

This has a clearly designed ‘masculine’ tilt though as the Zoomba section is side-lined to one corner of the gym space. Chandan Arora’s editing keeps pace with the dynamic action of the ever-moving screenplay. Beneath the surface story of redefining who is normal in sex and who is not, the film practically spills over with visual images of the ‘masculine’ and the ‘macho.’

The two serious drawbacks of the film are – the overuse of Punjabi in the dialogue which may be completely incomprehensible in many parts of the country and – the irony of the title of the championship – Gabru of the Year which Mannu is both struggling and determined to win – which sets back through its completely macho design, the aim of the film to strip the cliches and biases around ‘masculine’ and ‘feminine’ and give a new definition to “normal” in a largely patriarchal world. 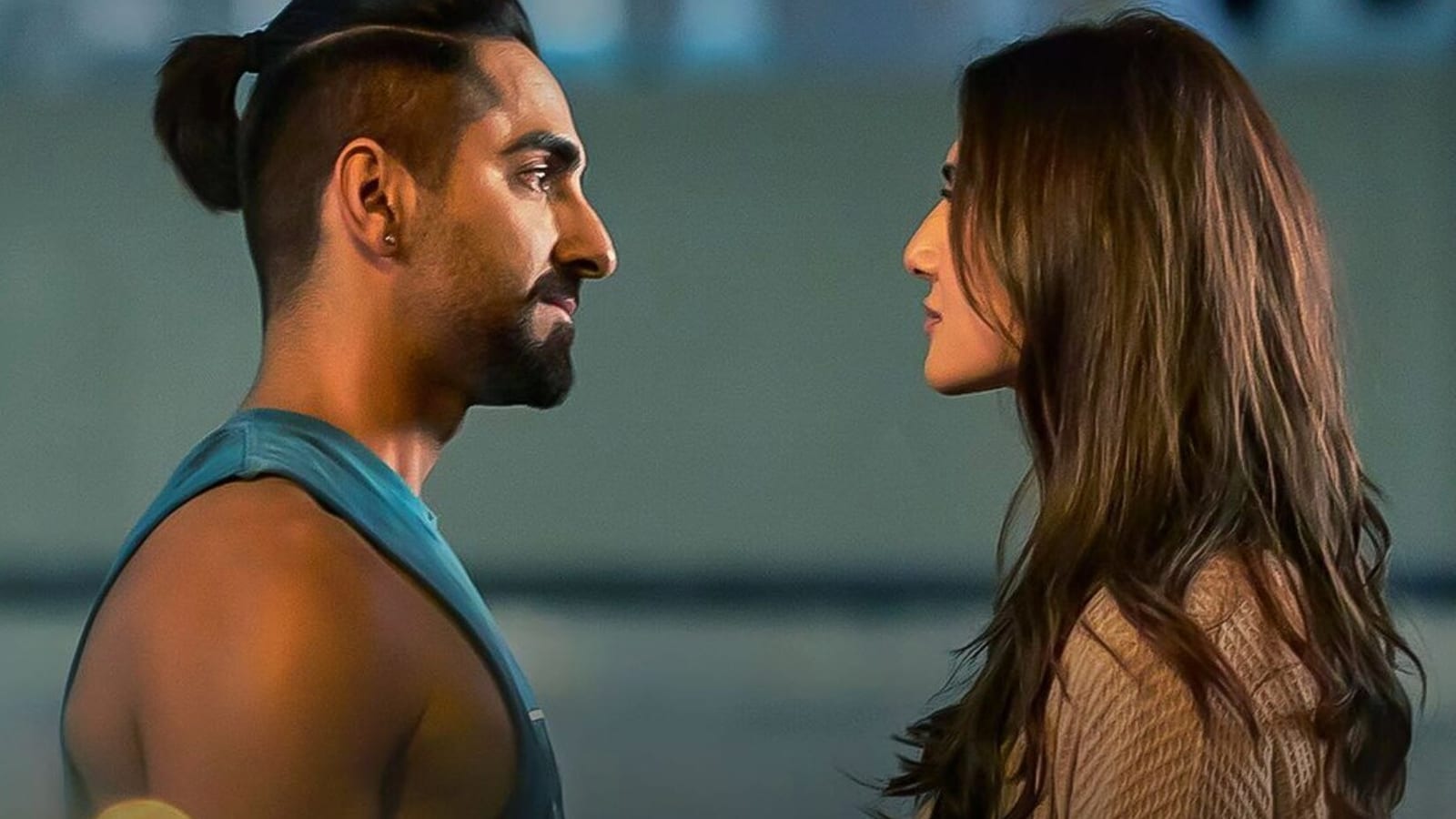