‘And This is The Truth None of You Can Erase!’

Behind men’s acid attacks on women in Kashmir

A 24 year old woman stepped out from her business unit in Srinagar’s downtown area of Osmania colony Eidgah. As she travelled a few miles, three assailants attacked her by throwing acid on her face. She fell on the street, amid the darkest night and screamed to seek the attention of people in the area.

The widely reported attack came at about 6 pm on February 1, when the residents of the Osmania colony Eidgah were prostrating in a local masjid. All of a sudden, they heard the screams of the 24 year old survivor. A group of youths reached the spot and immediately took her to the Shri Maharaja Hari Singh Hospital nearby.

Doctors at the hospital said that the survivor’s face had grievous injuries, and she had suffered contusions on her eyes.

After fifteen minutes, as the news reached her family, her father, who is a tailor by profession, fell unconscious in his home. Other family members, wiping their eyes, left for the hospital to discover her condition.

Azra Akhtar, older sister of the acid survivor, recalls how she was speechless when the doctors told them her sister had grievous injuries to her face, with her eyesight severely damaged.

“She doesn’t know when the Sun rises or sets. All we want is that these acid throwers should be hanged publicly,” says Akhtar. “We don’t want anything else. See tomorrow it can be your sister, mother, daughter. If you don’t speak up against these crimes, it will become routine for the assailants.”

She added that doctors at the hospital had told the family they were planning to refer the survivor outside Kashmir for further treatment. (After recording her statement before a magistrate, the survivor was shifted to Chennai for further treatment. On Tuesday the police reportedly filed a 1000 page chargesheet against three accused including two adults and one minor into the Srinagar acid attack case.)

Shahid Ahmed, her maternal cousin, said the financial condition of their home is too feeble and they cannot afford the expenses for treatment.

He said that district administration officials had also reached out to them about financial help, and some NGOs were working tirelessly on the case.

“Through money we can’t bring her real face back, but at least one should not lose courage. We can never forget this tragedy, which has left the whole society in shock,” said Ahmad.

Over the years, Kashmir has witnessed a rise in men attacking women with acid.

In January 2013, when one Riyaz Ahmed’s marriage proposal was rejected, he splashed a bottle full of acid on the 25 year old woman hailing from Khanpora, Bahgaat, Srinagar.

In December 2015, a 20 year old woman was grievously injured after two men attacked her with acid in Srinagar’s Nowshera area. A law student, she was about to enter her college when they attacked her.

In October 2021, when a 17 year old girl from south Kashmir’s Keller area was attacked with acid, she was left with burn injuries to her face. In all three cases the Jammu and Kashmir police managed to nab the accused in a short time.

After the latest attack, a police official told the press that they would soon file charges against the three accused men, one a juvenile.

“The investigation is being conducted professionally and scientifically to make it a foolproof case so that the culprits are punished by setting an example and deterrence is created among elements having such barbaric tendency,” he said.

According to prominent Kashmiri social activist Angad Singh, the existing laws are not strong enough to deal with these assailants who are attacking women with acid.

He said that for years people have been witness to these growing incidents in the Kashmir valley, and fast-track investigation should be started as early as possible.

“The movies which are based on violence and terror are also encouraging these kind of incidents in Kashmir. We must collectively stand up against these gruesome crimes, committed against women.”

Kashmir witnessed widespread protests against the attack. Demonstrations were staged in various parts of Srinagar to express solidarity with the survivor and demand stringent punishment for the culprits. Protesters also urged the government to bear all expenses and provide the best treatment to the survivor.

After the arrest of trio involved in this attack, police reportedly sealed the shop that had sold the acid in violation of Supreme Court guidelines.

City protesters accused the government of not checking the ledger of acid sellers who have abetted such attacks. A number of Kashmiri women also reacted to the attack online.

“Acid attack isn’t on one woman. It causes girls to drop out of school, women to quit jobs, makes most question their dressing, behaviour, and their very being. It makes them question themselves & take blame in all situations. It is an attack on womanhood”.

Ambreen Shah wrote in a thread on her timeline:

“I’m not sorry if it offends any of you. This incident where a girl was attacked with acid has disturbed me to the core personally and to add to the already vicious disturbance, it is the response of the people in our immediate and extended families, acquaintances, +1 and friends that are blowing exactly in equal proportion.

“I have too many questions and I haven’t been functioning normally since yesterday. One of the responses I heard that literally made me puke is, the girl is not of good character and she deserved it. Another is, she applied too much makeup. Since we are too good to judge everyone around us but won’t reflect within ourselves, at what level is it normal or justified to throw acid at a human who does not agree with us?

“This attack in my understanding sure is gender-based violence, to begin with wherein a woman was tried to silence for her decision because that man had no balls to accept the reality. Society, in general, on the other hand, is making and putting the whole blame on the girl (like always), I mean how and why (please let me know if there is any logical stand on this blame)?

“Given the general response, I won’t ever have the courage to speak to my family, friends (few) about the abuse I may or have faced. They definitely won’t be my first point of contact. It’s appalling how people are normalizing the criminal acts by making a judgment about the girl while listening to every damn information from the third person and not themselves.

“As a parent, one should be agitated that what if it would have been my daughter, is this what kind safe space is for the women out there. A girl who was attacked yesterday, her face is damaged, she has to live with it for her whole life, I can not come to the terms with the fact that she won't live the normal life from now onwards.

“Please excuse me for my errors/mistakes in this rant but this is not just a rant. This incident and the response that followed have blown me to a level where I am scared to a level I cannot explain. I’m ashamed to be part of a society where even education hasn’t helped to understand how the toxic structures are normalizing gender-based violence. A person has to be damaged to the extreme or even die while we come together at a community level & understand the intensity of an issue.”

“I seriously don’t even Want to Know the opinion of men on such matters. I’ve heard horrible things, hurtful perspectives from men. Things have been so shocking. I’ve blinded myself of hearing from them anymore, it’s been brutal a number of times.

“These discussions are scary. I’ve witnessed men carrying unknown subconscious evil in their hearts towards women. Not all, but yes, I HAVE witnessed it, in every kind of men, and it has always been shocking and dreadful to me.

“Seriously, I mean a girl receives an acid attack just because she rejected a proposal? If we try to fit in this society, we are accused of spreading immorality in this society created and opinionated by men. And if we don’t live with this society’s norms, we’re being attacked?

Nayeema Ahmed Mejhoor, formerly with the BBC and former chairperson of the J&K Women’s Commission told us that the acid attack shocked her as it did the rest of Kashmir.

“This is a new face of violence that has created horror in the valley. I admit that the fabric of our value based society is totally broken, partly by constant conflict and partly by our insensitive attitude towards social issues.”

As a result we are facing such crimes that used to be a stigma in the past, said Mejhoor.

Asked about the laws preventing acid attacks she said the relevant laws are very old and obsolete. “People are living in a digital world where every aspect of our life is changing with pace. The crime rate is increasing at an alarming speed but dealing with them is the same as in colonial times.

“Then, there is no seriousness of its implementation. Unless you bring the strict laws, the situation will not change,” she emphasised.

Adding that, there must be proper mechanisms and proper institutions to deal with crimes against women.

“We have nothing such in Jammu and Kashmir, everything seems to have collapsed after 5th August 2019. When every social issue is seen with the prism of ‘law and order’, who bothers to fix the society that has gone from bad to worse?” asked Mejhoor.

According to reports, 200 to 300 acid attacks are perpetrated in India every year. Analyses of these reports reveal that over 70% of these attacks target at least one female person.


Irshad Hussain and Mubashir Naik are independent journalists based in Kashmir 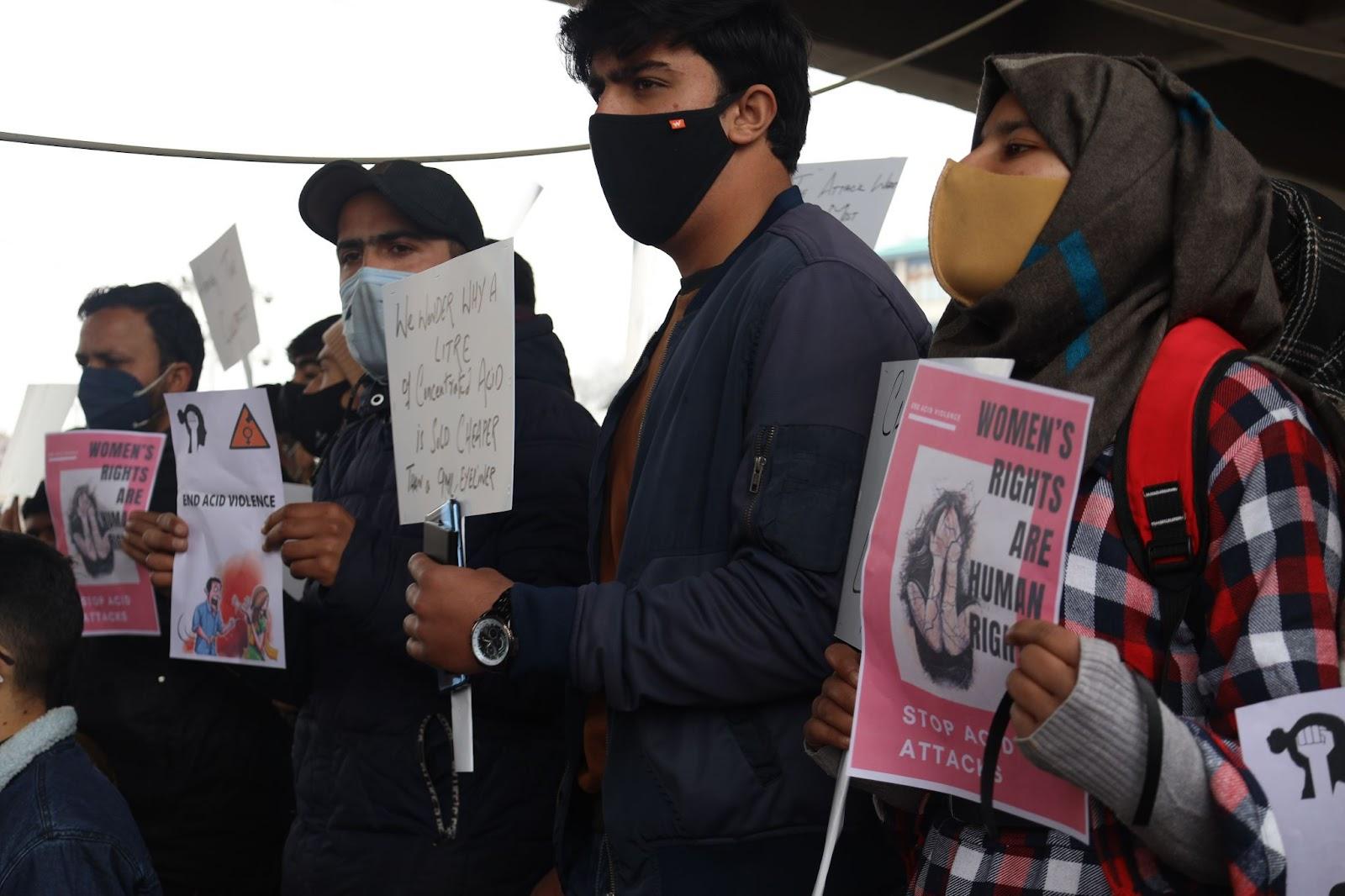