Islam does not make the hijab mandatory. It is a man-made introduction of a piece of clothing whereby women were made to cover themselves in the burqa and now a little more sensibly their heads in a scarf. But is this all what the current controversy is about? What religion does, or does not mandate?

And two, yes if there is a uniform all students should follow that to the letter. Parents can then choose or reject an educational institution depending on its flexibility on issues such as the turban which is part of the Sikh religion and hence now acceptable, or the hijab which has been dragged into unnecessary controversy by those seeking to create and stereotype the ‘other’. Again easier said than done in a state where educational opportunities are limited and where conservatism and patriarchy run hand in hand.

Unfortunately, as in all stories, there is this other side. Of the young girl struggling against her family and society to study. And in the process compromising with some of the demands of patriarchy in the hope that the world outside will understand and give her a place and sanctuary to realise her dreams. Today she is standing with placards that Hijab is her right. When and at what time did these replace the ‘education is my right’ placards

It is not about whether Islam allows the hijab or not, but whether educational institutions should throw out perfectly bonafide students because they wear a scarf? After all, even if hijab was mandatory in religion, the controversy would not have abated. Remember triple talaq where it is allowed by the religion and there were few takers for the argument that it has been proscribed by other laid down conditions.

It is about the right to education and the Constitution of India. And whether the better and more informed and responsible route would have been to build the hijab into the uniforms, with a specified colour so that girls from conservative homes could avail of education? After all, is education the primary objective of the state or the dress?

When students err they are hauled up, and in the better institutions a way out of a possible impasse is found. It would have taken little for the educational institutions to seek a meeting with the parents, and work out a solution acceptable to all. This would and could have been done had the primary focus been on education, and not in creating a controversy whereby the choice for young students was projected as education vs religion, when it was actually anything but that.

In most cases in Karnataka the girls had found a way out of conservative households by wearing the hijab. This should have been respected and applauded, as two to three decades ago the whole struggle undertaken by women's groups was to bring in an awareness amongst Muslims and other communities about the importance of education. Now that the girls are stepping out, they are being denied education with the false choice of religion versus education.

Unfortunately, the situation is getting more complicated as it is being exploited by both the Hindu and Muslim right who are opposed to each other, but use that opposition often to consolidate their respective communities. The Hindu right in this case is clear about using the hijab to whip up sentiment against the Muslims for bringing religion into education and thereby strengthening the stereotypes created and floated for a long time now. However, the Muslim right too is linking the hijab to religion, and instead of working to diffuse the situation so that the girls can go back to study, is making them choose religion represented by the hijab over education. Girls are being forced to withdraw from the schools under pressure from the Muslim right wing groups, and turned into champions of a religion that has little to do with the original and more to do with patriarchal controls.

The hijab case will now go to the Supreme Court. And it cannot be over and over re-emphasised that education is the issue, and if a piece of clothing can help expand learning and knowledge so be it. The solution has to de-communalise the situation and place it squarely in the realm of the Constitution and rights where the state and its institutions should make all ends meet to ensure education to all, women in particular. 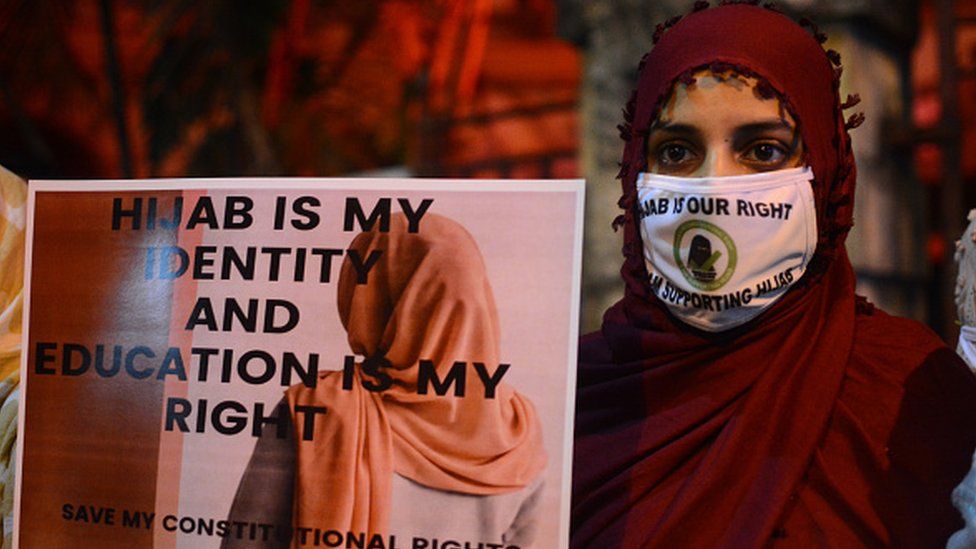