Side Effects of Hijab

You learn more out of controversies than in classrooms. Here I was thinking that hijab was just another part of the attire of some Muslim women. Silly me! I am now better informed. I now know that the hijab is a red rag.

Then, I had thought that religion was a system of belief which involves a certain amount of piety in its practice. Sillier me! I now know that religion is largely about the food you eat and clothes you wear.

And finally, I suffered under the delusion that once the court pronounces its verdict, you maintain a discreet, if disgruntled, silence. Going by the decibel levels around the country, I need suffer no more. So here I am, weighing in.

There’s one question which featured in the Karnataka High Court’s verdict, and has been asked and re-asked with the persistence of a telemarketer: is the headscarf an essential part of religion? The question, like many of life’s deeper enquiries, has more than one right answer. Also, I am not entirely convinced that the question itself is sound. What is ‘essential’, what is ‘part’? And getting to the nub, what is ‘religion’?

In pursuit of answers to these questions people have quoted a posse of religious scholars, sociologists, priests and historians. The last person you would expect to see in this motley crew is a lexicologist. Still I prefer going to my favourite English grammarian, H.W Fowler.

Depending which side of the current debate you are on, the hijab is a hated sign of oppression or a bugle blast of freedom. Let’s take the oppression angle first. It should have been simple enough to handle. You just need to tell the oppressors to lay off, and turn their attention to other pressing matters. But the problem is that the oppressed are not sporting enough to admit to the fact in the first place. So what do you do when those you set out so enthusiastically to rescue revel in remaining unrescued?

As for the question of freedom, it’s clearly generating more heat than light because of Newton’s (as yet undiscovered) Law of the Thermodynamics of Debate. When debates hot up, even people who were earlier mildly ambivalent and standing disinterested on the sidelines rapidly change colour. Suddenly they are either die hard opponents or sworn supporters.

Such public debates have other side effects. They generate a hallucinatory sense of importance for themselves. It’s not about a few metres of silly old cloth any more. It’s about the fate of women – if they miss this particular shot at liberation, they may have to wait forever for a second stab… the future of education hangs in the balance for you can’t go to classroom in a headscarf… and finally, the whole future of the country is going to be made or marred depending on how we handle this issue.

I mean, really? And all this when we are in between calamities: a perennial pandemic and a near-perennial war?

Whatever else you may find under the hijab, I see the four Ps: patriarchy (in your face – excuse the pun), prejudice (rampant), patriotism (misplaced), and good old fashioned paranoia. For good measure you can also add ‘Pakistan’ – tickets to which country will be the consolation prize for those who lose this one. None of this is going to get us very far. Won’t it make better sense if in matters of education we think less of hijab and more of kitab? 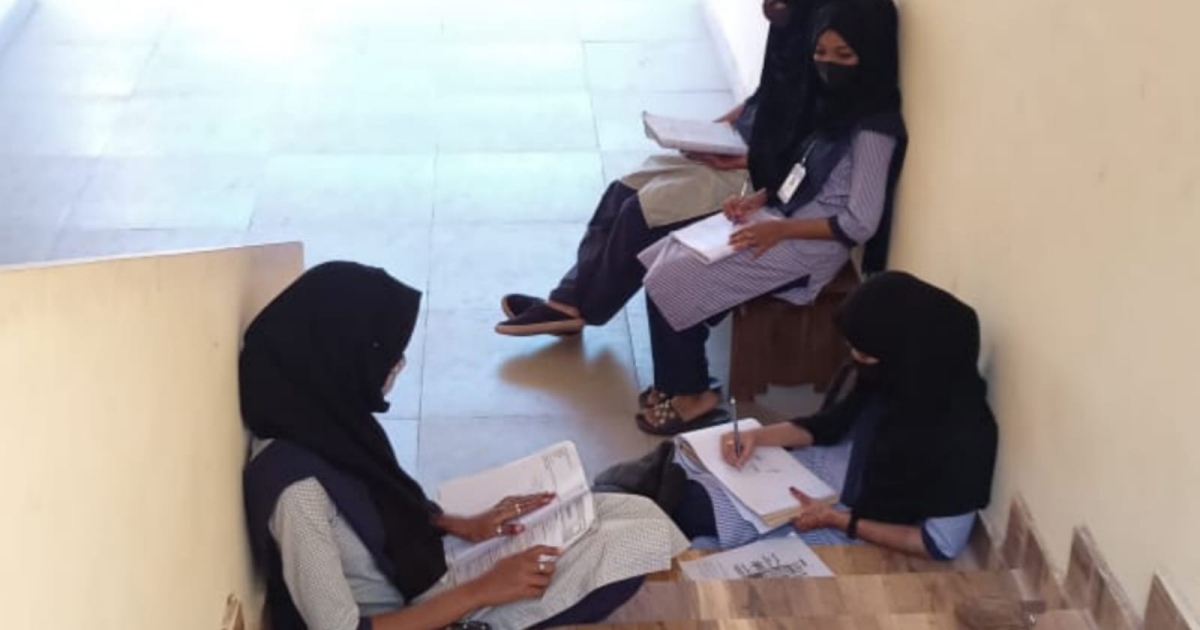