NEW DELHI: Iranian artist Atena Farghadani has been awarded a 12 year sentence by Tehran’s Revolutionary Court for painting a caricature depicting the members of Parliament with heads of animals. She had drawn the cartoon to protest against the proposed stricter divorce laws and birth control measure.

The proposed Act had taken shape after Iranian Supreme Leader had called for an increase in population of the country while denouncing contraceptive measures as a western concept last year.

The activist had been in jail for nine months already before the sentence was announced, going on hunger strikes on and off, for two weeks continuous at least once, during which she also suffered a heart attack. She has also been charged with “gathering and colluding with anti-revolutionary individuals and deviant sects” during an art exhibition by the name of ‘Parandegan-e-khak’ (Birds of Earth) which was held to commemorate the killed and persecuted political prisoners and members of Baha’i faith. 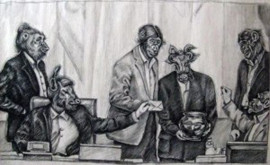 The Cartoon which caused the fracas

The cartoon was drawn in September last year for which she was kept in solitary confinement for two months where she faced harassment at the hands of prison guards, before being released on bail. She was again arrested in January this year when she posted a video on YouTube recounting the horrors of her prison time.

“One of the guards opened the cell door violently … and shouted ‘take off your clothes’. I told them that what they were doing was illegal,” she said in the video. “One of the guards who swore a lot held my hands up, because I was resisting the body search … My right hand hit the wall and my wrist became swollen and bruised … I told them that I was on ‘dry’ hunger strike and that I would file a complaint. One of them told me ‘shut your mouth or I will hit you so hard that your mouth will be full of blood’.”

Amnesty International researcher Raha Bahreini told The Guardian newspaper: “Iran’s relentless crackdown on journalists, artists and activists critical of the state is not only out of line with international human rights standards, it is also utterly inconsistent with claims by Iran’s minister of foreign affairs and other authorities that Iran does not jail people for their opinion.”

Amnesty International has declared Farghadani a “Prisoner of Conscience”. Cartoon’s Rights Network International (CRNI) member Nikahang Kowser, who too was jailed in Iran for political cartooning in 2000, called the Iranian act as “the stupidity of the system that does not respect the rights of women to have fewer children.

Atena is a brave artist who did not censor herself in face of fear. The infamous Judge [Abolghassem] Salavati’s fear-mongering tactics did not work on Atena and she decided to tell the world how Iranian jailers treat political prisoners. Many people thought that President [Hassan] Rouhani has the power and will to make drastic changes and protect citizens’ rights. He cannot even defend the freedom of speech and choice of someone like Atena, an innocent artist who does not believe in compromise and self censorship.”

The Draconian sentence also belies the statement made by Iran’s Foreign Minister Mohammad Javed Zarif, otherwise known for deftly handling the nuclear negotiations, when he said during a talk show in America that “We do not jail people for their opinions”.

Kanika Mishra, another CRNI member, who too has faced harassment at the hands of moral police in our own country, expressed the condemnation in the form of a cartoon she made depicting a female prisoner with her pen in her hand. 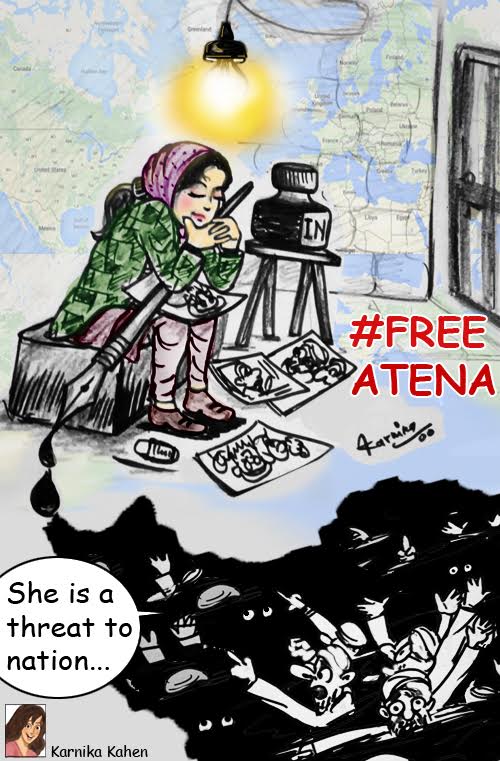