Attacker is in Black Coat

NEW DELHI: Revellers at the annual gay pride parade in Jerusalem found themselves screaming with fear when an ultra- orthodox Jewish man went on a stabbing spree, during which he stabbed six people, severely injuring some.

Yishai Schlissel, the attacker, hid in the supermarket before setting upon his task and hid the knife in his coat. He started stabbing people when the revelry was in its full swing, and soon the chants of joy gave way to hysterical screaming.

Eli Bin of Israel’s emergency service said six people were injured during the attack, two of them seriously. One woman was knifed in the back, chest, and neck, and was found unconscious on the ground.

A Jerusalem police spokesman Asi Ahroni said there was “massive presence” of police to prevent any mis-happening but “unfortunately the man managed to pull out a knife and attack.”

The Medics reached almost after the attack and tended to the injured. The shocked participants of the parade all this while stood on the sidewalk and consoled each other. 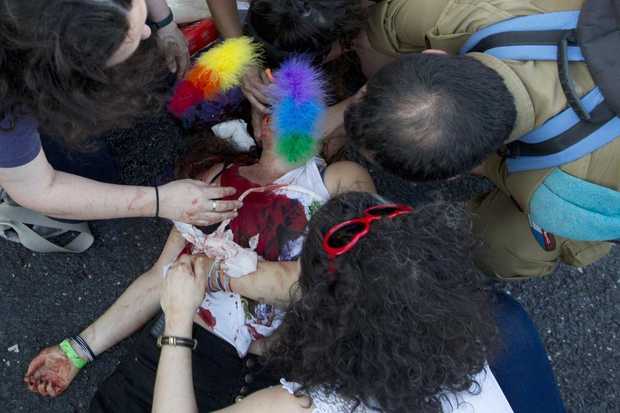 This was not the first time that Schlissel had attacked gays. His fatal homophobia goes as far back as a decade. In 2005 too he had embarked on a same mad stabbing spree during such parade for which he had been imprisoned. He had just been released three weeks before, and had also given a premonition of what is to come, when during an interview given to Israel’s Channel 2 TV, he had said, “The struggle isn’t over and the un-pure want to contaminate Jerusalem,” he said. “They want to contaminate the people of Israel.”

Jerusalem gay pride is a smaller affair than what is observed in more secular Tel Aviv, but after the news of the attack spread far and wide, more and more people joined the shaken participants in solidarity.

The act of violence has been condemned by all alike. Israel President Reuven Rivlin called the attack a “terrible hate crime.”

“People celebrating their freedom and expressing their identity were viciously stabbed. We must not be deluded; a lack of tolerance will lead us to disaster. We cannot allow such crimes, and we must condemn those who commit and support them,” Rivlin said