Marathon runner Who Ran without A Tampon Writes about it

NEW DELHI: London marathon runner and former M.I.A drummer caused a ripple among the feminists when she ran the whole 26 mile marathon while on her period without any sanitary tool. When the 26 year old Harvard graduate reached the finish line, she had dark stains on her legs but quite oblivious to them as she hugged her husband and her father and finished being on the podium. Since the race many laudatory articles have been written including her account in the form of an essay on her blog titles ‘Going with the Flow’.

She recounts in her essay how one could get easily bogged down by such a normal phenomenon as period when it happens to occur just a night before an important event, just as it happened with her. “I got my flow the night before the London marathon and it was extremely painful…. I had spent a year enthusiastically training hard, but I had never actually practiced training on my period,” she wrote before eventually deciding to take a chance at the lasting glory. “I decided to take some midol, hope I wouldn’t cramp, bled freely and just run,” She reminisces.

But the 26 year old’s triumphant feat has not gone down the throat of many as smoothly as the rest, there are twitter feeds which attest to that. Sample:

@Sugarchic189 said: "What a disgusting way to spread awareness! Why couldn't you raise funds to send tampons or pads to places that lacked access!”

However, the words of praise far outweigh those who deprecate, which include comments from popular feminist Lena Dunham and Comedian Jena Friedman. 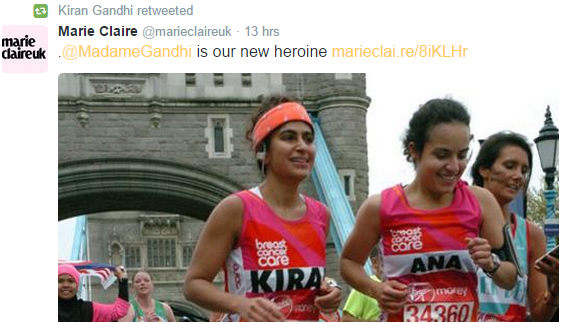 Daily Mail amended its feminist faux-pas when it was paraded on the social media website by Jezebel. The mail had written a supportive article for Gandhi albeit pixellating the stained part on her slacks. 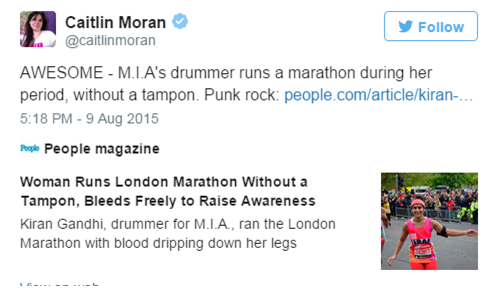 Gandhi slammed period shaming in her essay after her win and pointed out how it pulls back many for lack of sanction in the society. "By making it difficult to speak about, we don't have language to express pain in the workplace, and we don't acknowledge differences between women and men that must be recognized and established as acceptable norms," she wrote.