NEW DELHI: Mangalore right wing activists don’t believe in sitting pretty on their past laurels and keep on adding new feathers to their caps. The latest shocker from southern city comes in the form of a brutal public beating of a man who was merely seen talking to a girl from another religion.

The incident happened in Babugudde, Attavar, where the 28 year old man was tied to an electric pole and beaten and humiliated by close to a dozen men who took offence on seeing a Muslim with a Hindu girl. The victim was also made to take off his clothes.

The victim, a resident of Kulur, is working in a supermarket along with the girl. He later told police that he was there to give money to the girl who had asked for it as a loan. He was attacked by the mob as he was going to an ATM to withdraw the money. The girl too was heckled by the crowd as she tried to intervene. Several people who took active part in free-for-all made videos on their phones which was later uploaded on the social media to the further embarrassment of the victim.

Police has so far arrested 13 people and investigation is on, while it is not known yet that to which organisation the mobsters belong to. 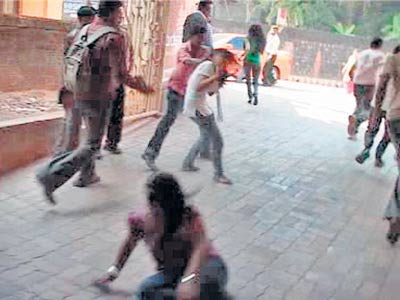 A picture of an earlier assault on pub-goers

Mangalore is dominated by right wing forces policing the youth.In 2009, Sri Rama Sene headed by one Pramod Muthalik, ran a campaign raiding city pubs and thrashing women who were found in those pubs. Also just a few weeks ago the Kukke Shri Subrahmanyeshwara College in Sullia taluk in Dakshina Kannada district had suspended two girls studying as they had uploaded their pictures with beer bottles, clicked outside the campus, which then went viral on Whatsapp.