NEW DELHI: Religion is complex, but women are more so. A survey carried out by Pew claims that women are universally more devout than men.

It found 83. 4 per cent of women as against 79.9 per cent men, identify with a specific faith across nations. The seemingly small difference of 3.5 per cent translates into a whopping 97 million more women.

The number of women who identify with a religion among Christians scores high in comparison to men. Same goes for Muslim women where they show a predilection for being more devout on all accounts than men except one. When it comes to weekly prayer outside their homes, men in Muslim nation far outnumber their female counterparts.

Of 81 countries for which the data of weekly prayers was collated, 30 nations, almost all European and American, show a trend of more women attending these religious events.

The study that seeks to map the gender gap in religion, rates the participants on their religious ‘commitment’. The measures along which this commitment is calculated were “religious affiliation, frequency of worship service attendance, frequency of prayer, and whether religion plays an important role in a person’s life.”

When it came to daily prayers (inside or outside the home), out of 84 countries, 43 countries are where women are significantly more inclined to indulge in this than men. A very large number of these 43 countries are in the Americas and Europe. The only country where this was not so, is Israel, an orthodox Jewish state where more number of men committed to offer daily prayers than women. 40 countries showed no difference which was statistically significant in gender gap on this measure; these included countries in West Asia, Russia and East. 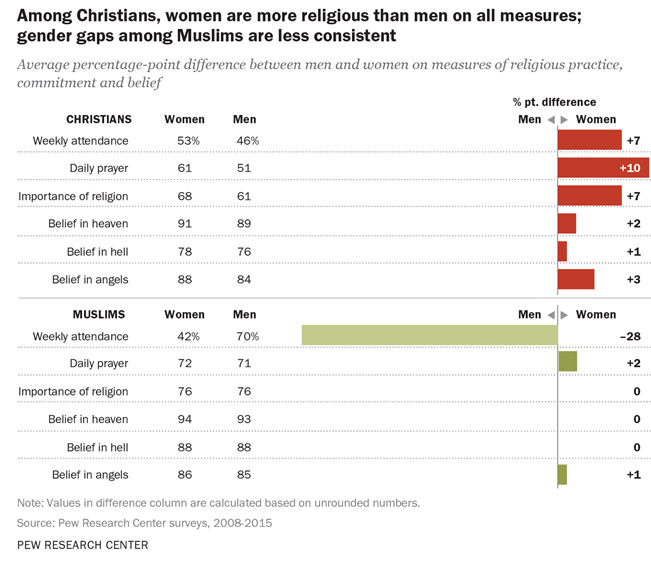 In a study published in 2002 titled “Physiology and Faith: Addressing the ‘Universal’ Gender Difference in Religious Commitment” authored by Rodney stark, it was argued that women tend to be more god-fearing in nature because they lack testosterone—the hormone dominant in men. The lack of testosterone among women thus forces them to be less risk-taking in general against men, who in turn, can afford to be more irreligious and indulge in riskier behavior.

A counterview was manifested in another study, which promoted the role of socio-economic factors responsible for sincerity of women in religious matters. A study titled, “Why Are Women More Religious Than Men?” authored by steve Bruce and Marta Trzebiatowska, argued in it that biology has hardly anything to do with religious makeup of women and men. They contended, among other things, that the benefits of secularization of society took time to trickle down to women in general and this added to their reason for having a more zealous religious outlook. They wrote, “Nothing in the biological make-up of men and women … explains the gendered difference in religiosity,” negating the ‘nature’ factor being a preponderate cause of this phenomenon. The study also argues that the fact women are the only ones who give birth causes them to believe more in the concepts of Heaven and Hell

Meanwhile, the Pew research Centre study also projected the possible growth trajectory of various religions across the world. Their calculations which prefigure the religious makeup of the world in 2050, informs us that although Christianity will remain the most prevalent religion across the world, Islam will be the one growing at the highest rate and will be a close second to Christianity.

The study also projected that, “India will retain a Hindu majority but also will have the largest Muslim population of any country in the world, surpassing Indonesia.”