RIO DE JANEIRO (IPS): The outrage in Brazil over the gang-rape of a 16-year-old girl by more than 30 men prompted mass protests by thousands of women on the streets of cities around the country, while activists complain that the response to the case by politicians has been misfocused.

The first reaction by the government, in the face of the national outcry, was to create a new women’s protection unit to support the public security forces. Critics say the policy is completely police-oriented and merely focused on stepping up law enforcement.

Rio de Janeiro state Governor Francisco Dornelles said he was in favour of executing rapists, even though capital punishment is actually prohibited by the Brazilian constitution.

The Senate rushed through a proposal to stiffen prison sentences for sexual assault, increasing them by one- or two-thirds when the rape is committed by two or more people. It is now pending approval in the lower house of Congress.

But Sonia Correa, one of the heads of the global organisation Sexuality Policy Watch, said stiffer sentences are not the solution, as shown in India which adopted the death penalty in 2013 for gang rapes or rapes that lead to death.

It is a cultural issue, she said. “Society itself has always fomented violence against women,” and a large part of the population blames the victims themselves, Correa added.

There is a perception that violence against women has increased, as a result of the publicity surrounding the rape of the teenage girl, who believes she was drugged at her boyfriend’s house in a Rio de Janeiro favela or slum on Saturday May 21 and woke up in a different house on Sunday May 22, surrounded by the men who apparently raped her.

She said she counted 33 attackers, some of whom were armed, when she regained consciousness. She only went to the police days later, after several of the men posted a video and photos of the rape on the social networks.

The police officer put in charge of the case was replaced for not taking her account seriously.

As a result of the public uproar and the evidence, a new lead investigator was named and the case was put in the hands of a police unit that specialises in crimes against children and adolescents, which accepted the video as proof of the rape. Using the video, several suspects were identified, and two have been arrested so far.

“The culture of rape has deep roots, nearly geological, and not only in Brazil, where its deepest layers lie in colonisation and slavery, with their male-oriented traditions of controlling the bodies of other people, not only women, but also slaves,” said Correa, an architect with a graduate degree in anthropology.

Brazil’s penal code, which dates to 1940 with subsequent amendments, included sexual assault among crimes against public morals; in other words, rape was an attack against society and the family, not against the woman and her body, she pointed out to IPS. 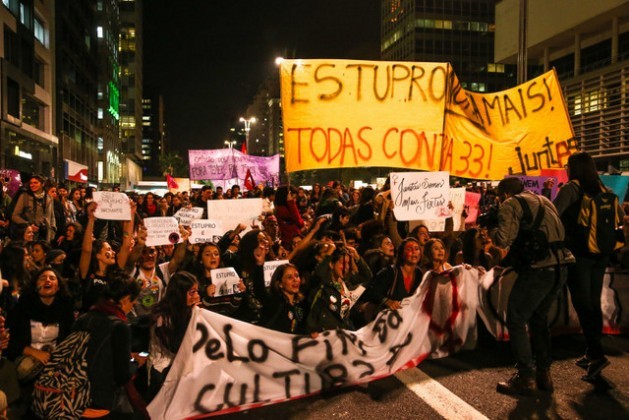 “No more rapes, everyone against the 33” reads a sign in a Jun. 8 mass protest by women in the city of São Paulo. Demonstrations against Brazil’s sexist culture have mushroomed around the country, after the global outrage caused by the gang rape of a teenager by 33 men. Credit: Paulo Pinto/AGPT

Not until 2009 was a reform adopted to correct that distortion and include male victims. Before that, only females were considered victims of rape.

The penalties, which range from six to 30 years in prison and are driven up by aggravating factors like physical injuries, death or the young age of the victim, have failed to curb the apparent rise in sexual assaults in this country of 205 million people.

Officially, 50,600 rapes were committed in 2011: 138 a day or one every 10 minutes, according to statistics from the governmental Institute for Applied Economic Research (IPEA).

But this is estimated to represent just 10 percent of the real number of rapes, which could exceed half a million cases a year. Most victims do not go to the police out of shame, fear of sexist police officers, or ignorance about how to report rape or about the crime itself.

A large part of the cases involve underage victims abused in their own homes by relatives or friends of the family – another major barrier standing in the way of reporting the incidents.

“It’s a tragedy that affects largely black people, who account for 51 percent of rape victims,” although this proportion is probably underestimated, according to Jurema Werneck, a medical doctor who is the coordinator of Criola, a non-governmental organisation that defends the rights of Afro-Brazilian women.

The large number of rapes “has its origin in sexism, but also in patriarchal racism,” because it is “an act of power against those who they see as inferior and powerless, like black women,” she told IPS.

The culture of rape is “a contradiction in the population, which mobilises to protest against an appalling crime, and even wants to lynch the suspects when children are raped, but shows a certain level of tolerance towards sexual violence against women,” said Marisa Sanematsu, contents director at the Patricia Galvão Institute, a local feminist organisation.

The apparent general condemnation is not reflected in the low rape reporting rates “which are due to the fear of what friends, the family, the police or even the judge will think. Social opinion holds that men can’t control their sexual desires, and react to an attractive woman who is all made up and wearing provocative clothing,” she said.

“A large part of the population thinks there are ‘rapable’ women, who know the risks they’re running and should know how to protect themselves, and shouldn’t expose themselves,” said Sanematsu, who added that society accepts the unequal social roles assigned to males and females.

Gender education, she said, is the best way to prevent and reduce all kinds of violence. But the current trend is to ban it in schools, as the state government did in São Paulo, Brazil’s richest, most populated state.

“Nothing will be achieved unless we attack the roots of the culture of trivialized violence,” which isn’t associated with poverty, but affects all social classes, she said.

To change the culture of rape “the central issue is a new construction of masculinity,” which is now based on “sexual predation,” said Correa.

The growth of conservative forces in Brazilian society, and especially in Congress, worries women’s rights activists.

Congress is studying several bills that would further restrict abortion, which is already illegal, and would restrict the rights gained by the lesbian, gay, bisexual and transsexual (LGBT) community and unconventional families.

The wave of conservativism was accentuated with the new government of Vice President Michel Temer, who is now acting president due to the impeachment of President Dilma Rousseff.

The old Ministry of Policies for Women, now demoted to a secretariat under the Ministry of Justice, is headed by an evangelical member of the lower house of Congress who has already publicly stated that she is opposed to abortion in case of pregnancy caused by rape, one of the few circumstances in which “therapeutic abortion” is currently allowed.

Temer’s cabinet is the first in years to not include a single woman or black person.

“Dogmatic religious forces are expanding and aim to control the country,” said Correa. They hold a large number of seats in Congress and own media outlets, especially TV stations, where they further their conservative agenda.

(Photo: The Rio Peace organisation covered the sand on Copacabana beach, in the city of Rio de Janeiro, with blood-red or bloody women’s underwear and giant photos of women’s faces, also bloodied, representing the women who have been murdered in Brazil. Credit: Tânia Rêgo/Agência Brasil)