NEW DELHI: Varsha Pawar of Osmanabad district in Maharashtra was like any other housewife till she started selling solar cook stoves and lamps in her neighbourhood a little over a year ago. Life was never the same again. Today, she is the sarpanch (village council chief) of Tirth Khurd, advocating the use of clean energy not only in her village but also in the entire Tuljapur administrative block.

“Many women now travel to seek my advice on how to be economically independent,” Pawar, 34, toldindiaclimatedialogue.net. “Earlier, I could not even move out of the house. Today, none of the household decisions are made without my consent.”

Pawar is one of the 1,010 women entrepreneurs in the villages of Maharashtra and Bihar who have empowered themselves by running successful businesses of selling solar appliances to rural households. This was made possible through the efforts of Swayam Shikshan Prayog (SSP), a non-profit based in Pune in Maharashtra that helps village women to become clean energy entrepreneurs.

This initiative to create climate leaders has earned it a United Nations climate award this year. The clean energy project will be one amongst 13 initiatives that will be recognised at the UN climate summit to be held in Marrakech, Morocco, in November.

These women entrepreneurs are now supporting rural communities to take constructive steps to improve the quality of environment, adopt clean energy products and services, recharge community water sources and promote agricultural best practices in order to improve their long-term resilience to climate change, according to Prema Gopalan, a co-founder of SSP.

“The project is based on a market-based approach and can be can adapted anywhere. Large companies can take their clean energy products into rural markets,” Gopalan told indiaclimatedialogue.net. “The need for clean energy products is widespread and women can be engaged as entrepreneurs, making it a sustainable solution in India and elsewhere.”

Typical energy use in Indian villages is extremely polluting. Cooking is fuelled mostly by wood and waste biomass and kerosene oil is used to light homes. Women and children spend hours seeking out fuel for cooking, while burning kerosene and wood cause lethal indoor air pollution and releases greenhouse gases that contribute to global warming.

As many as 4.3 million deaths worldwide were linked to indoor air pollution in 2012 in homes that depend on coal or biomass for cooking, out of a total of 7 million deaths caused by exposure to air pollution, according to estimates by the World Health Organisation. Cook stoves and lamps powered by sunlight help eliminate this hazard.

“Recognising the need for clean cooking and drudgery reducing options for rural women, SSP (initially) took up the opportunity to partner a large company to co-create a clean fuel cooking stove and grassroots business model that built on the strength of the existing women’s SHG (self-help group) network,” Gopalan said. “The next opportunity to scale up the women’s network in clean energy was in 2012, when a Partnership on Women’s Entrepreneurship in Clean Energy (wPOWER), a programme supported by the US State Department and USAID India, led to popularising clean energy to over one million people. By 2015, SSP successfully established a network of more than 1,010 grassroots women entrepreneurs across eight districts of Bihar and Maharashtra. “ 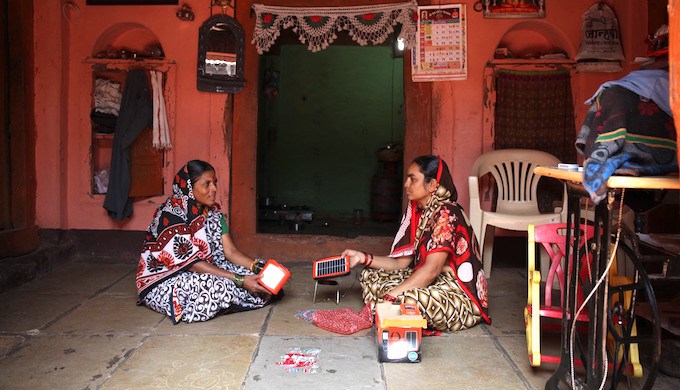 The project to promote clean energy came with its unique set of problems. The main challenges were related to providing credit support for the women who wanted to establish their clean energy business. “We linked them to our microﬁnance Sakhi Samudaya Kosh (SSK), an independent company, for credit support to consumers for purchase of clean energy products and credit solutions to support women entrepreneurs,” Gopalan told indiaclimatedialogue.net. “We also partnered with NABARD (National Bank for Agriculture and Rural Development) to support consumer ﬁnancing to access clean energy products.”

The other challenges included popularising the concept of clean energy and create substantial demand among underserved rural communities; identifying women who would invest in and take up the challenge to enter into clean energy space; and the lack of working capital credit from ﬁnancial institutions.

The project has now reached more than 4 million people across four states in India. The project’s women entrepreneurs make clean energy products accessible to people living in their communities, which helps cut greenhouse gas emissions. Their efforts have resulted in more than 100,000 women and households using clean cook stoves, which save almost 100 tonnes of firewood per day. Similarly, the promotion of solar lanterns, biogas cooking units, organic farming, vermi-composting and efficient irrigation technology has been part of SSP’s efforts to address climate change.

“We recommend the urgent need for an enabling ecosystem that encourages rural women to become clean energy entrepreneurs and reach out to those remote and underserved communities that the still struggling due to power shortage, for women who are still covered in smoke to provide a meal to their family, for the kids who fall behind in studies due to lack of lighting in their houses and all those who are not able to earn a decent income just because they do not have access to electricity,” said Gopalan. “We owe this to those communities to give them the opportunities which are not merely choices but is their right.”

The non-profit has ambitious plans ahead for scaling up the project to promote clean energy. “We plan to move women entrepreneurship along the clean energy value chain so that we see more women in not just last mile distribution but also as green business leaders,” said Gopalan.