NEW YORK (IPS) : Of the world’s 2.3 billion children 14 percent – or 320 million – are living in single-parent households, most often headed by single mothers. Those children aged 0 to 17 years and their single mothers and single fathers face special challenges, including economic hardships, social stigma and personal difficulties, that require society’s attention and assistance.

While raising children is a major responsibility and protracted undertaking for couples, it becomes markedly more demanding and often onerous for lone parents. Children raised in single-parent households generally do not have the same financial means, personal care and parental support available to them as those brought up in two-parent families. Consequently, children in single-parent families are frequently disadvantaged due to comparatively high levels of unemployment, poverty and poor health among such households.

The primary cause of single-parent households in the distant past was parental death due to disease, war, maternal mortality and accidents. As a result of those high adult mortality rates, it is estimated that at least one-third of the children had lost a parent during childhood.

Today in addition to parental death, which fortunately has declined markedly over the past century, socio-cultural factors have arisen as the primary causes for single-parent households. Divorce, separation and abandonment are now major reasons for single-parent families globally. In addition, unplanned pregnancy, intended pregnancy and adoption by those who are unmarried and without partners are among the causes of single-parent households in many Western societies. 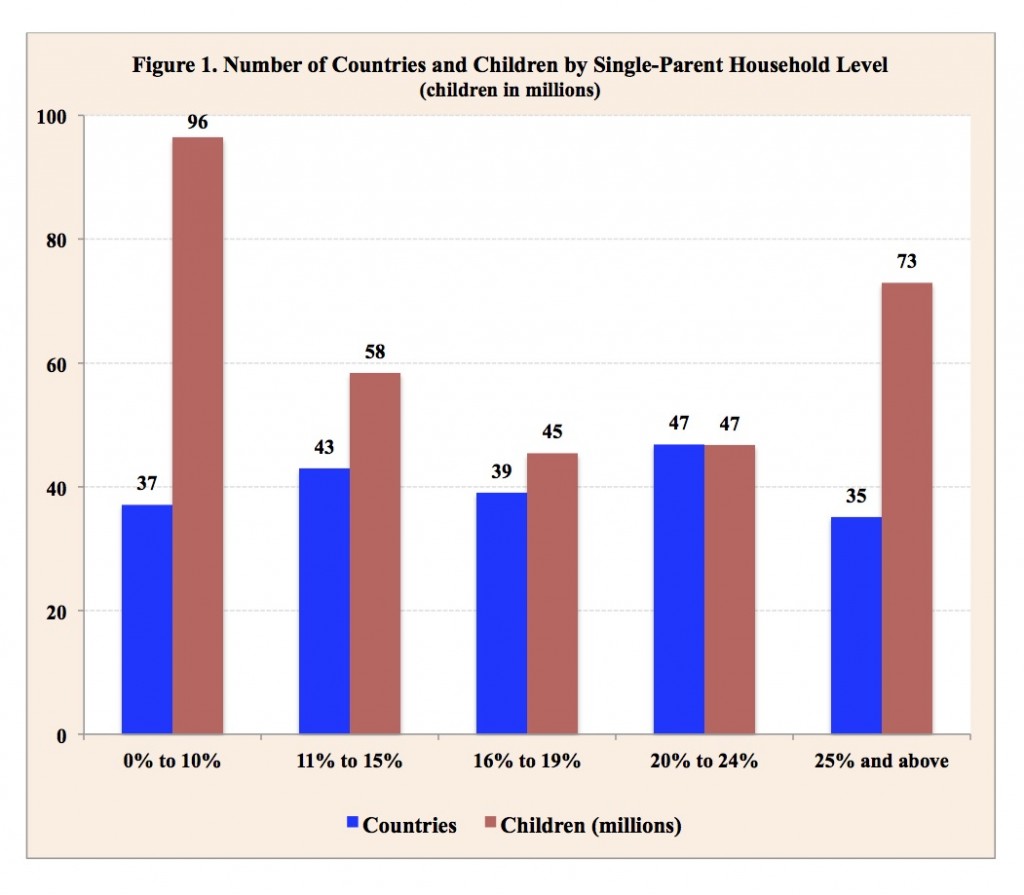 The levels for the remaining 129 countries fall between 11 to 24 percent of children living in single-parent households. Most OECD countries fall within this range, with Austria, Belgium, Canada, Denmark, France, New Zealand and the United Kingdom having no less than one-fifth of their children living with a single parent, again typically a lone mother. 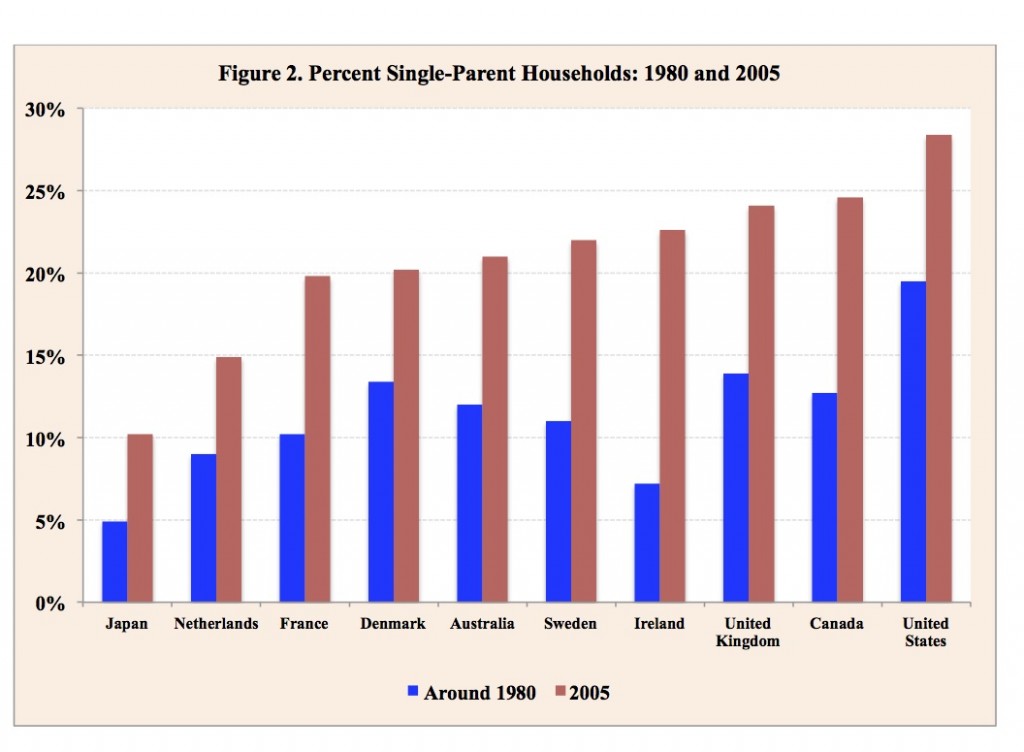 In virtually every country most single-parent households consist of mothers and their children. Lone mothers typically head more than 80 percent of single-parent households. Besides fathers abandoning or separating from their families, divorce courts generally award child custody, especially young children, to the divorced mother. 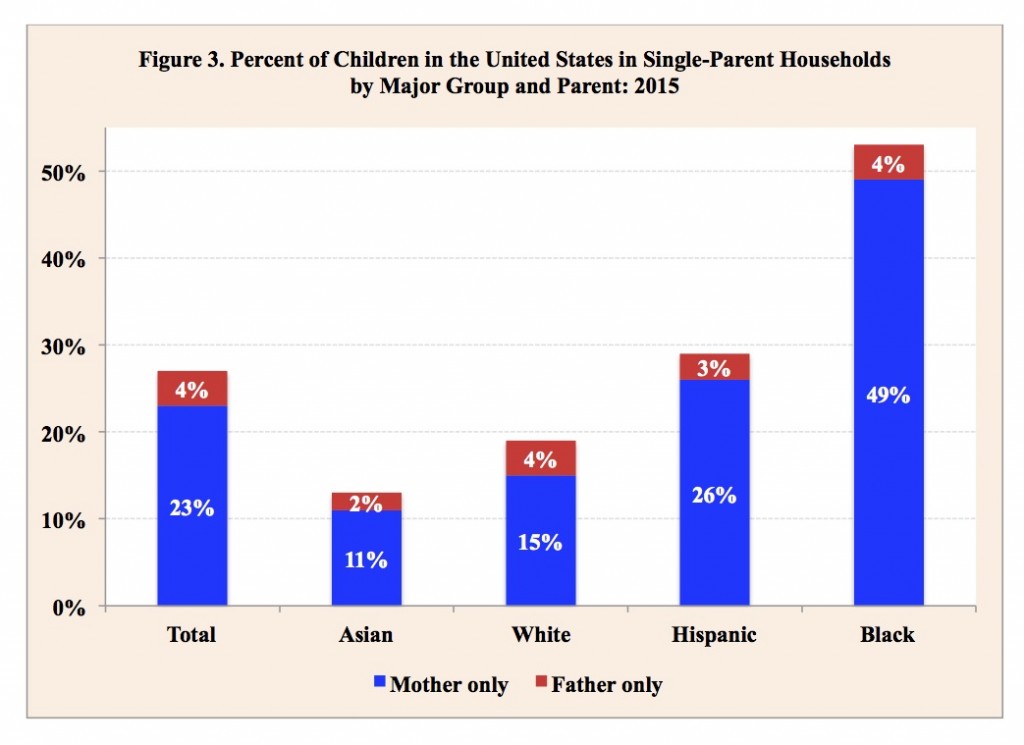 While parental death continues to be an important cause of single-parent households, especially among high-mortality countries, most single-parent families are the result of divorce, separation and abandonment, which have increased markedly over the past half-century. Also, the increasing incidence of cohabitation and non-marital childbearing particularly noteworthy in most Western countries has made breakups, separations and abandonments easier, generally placing them outside normal channels of legal recourse and state jurisdiction. Consequently, cohabiting family households are disrupted or dissolved more frequently than married family households.

The regions where children are least likely to be reared in single-parent households are Asia and the Middle East, where cohabitation and non-marital childbearing are rare. For example, less than 1 percent of children are born out of wedlock in China, Egypt, India and Indonesia and Saudi Arabia.

Although relatively small, growing numbers of women in developed countries, especially those who are professional and older, are becoming single mothers by choice. Concerned about their reproductive clock ticking and the lack of a suitable partner, some of those single women have turned to sperm donors in order to have a baby and establish a family.

Other single women, and to a lesser extent single men, are increasingly choosing to adopt and raise a child in a one-parent household. In the United Kingdom 10 percent of all adoptions between 2012 and 2013 were done by single persons. Also in the United States it estimated that in the last few years approximately 25 percent of special needs adoption and 5 percent of adoptions were by single parents. Again, it is important to note that a child adopted by a single parent is likely to be better off than not having been adopted at all.

Marriage, the relationships of couples and childbearing are widely recognized as private matters for individuals to decide and manage largely on their own. However, considerable research finds that not all family structures produce equally beneficial outcomes for children. In addition, the growth of families with a single parent has important economic, social and political consequences for societies.

Worldwide nearly one in every seven children under age 18 years – or 320 million children – is living in a single-parent household, mostly in mother-only families. Governments and civil society need to adopt policies and establish programs providing the necessary assistance, support and opportunities to ensure that children in single-parent families are not penalized or disadvantaged, but can lead lives permitting them to develop successfully to their full potential, and thereby contribute meaningfully to overall societal wellbeing.