Save The Last Dance

It's coming down in sheets.

The 90s clad doorman, with his red and white lapelled jacket and name tag isn’t surprised when I run across to take shelter under the awning of Priya Bar and Restaurant, easily discoverable in the otherwise labyrinthine neighborhood of Byculla East.

He is, however, most perturbed when I confidently open the door to be greeted by the sharp, yet comforting fragrance of sandalwood incense bizarrely mingling with the faint ‘dichik dichik’ coming from the second door. Almost immediately, I am surrounded by an army of curious stewards and bowtie clad waiters as I prepare for the third degree in the tiny temple like enclosure.

After a brief inquisition, Sandeep whisks me away to ‘makeup’ to meet the girls. “I came to Bombay to be a dancer,” he says as he waves his hand, urging me to keep up as we make our way through the surprisingly winding passages of the poky bar. “I realised there’s no dance here, but I still stuck around,” he says cheerfully.

In August 2005, under RR Patil, the state imposed the ban on dance performances in bars and res-taurants, rendering thousands of dancers around Mumbai jobless.

Priya Bar, like many other dance bars, turned into an ‘orchestra bar’ after the 2005 ban. Owned and run by Yeshwant Shetty since 2001, the permit room turned dance bars good run didn’t last long. The ban may have been lifted but then came the Act under which all dance bars now have to oper-ate. Under the Maharashtra Prevention of Obscene Dance in Hotels, Bar Rooms and Protection of the Dignity of Women Act, 2016, there can be no ‘obscene’ dancing. A host of other such ambiguous rules also make up this Act, which has left the owners of these dance turned orchestra bars seriously mulling if they should make the switch again.

“Kholo! Mere saath koi hai” Sandeep hollers as he bangs on the door of the makeup room. There’s some scrambling, before the door yanks open. “What?” says a half made up Sarika as the other girls stop what they are doing. Her gaze softens as I attempt an apologetic smile. I am hurriedly let in and Sandeep is dismissed with a thump on his back. ‘Get her some water, hurry up!”

I am met with guarded hospitality, the mirrored cabin capturing the tension doubly. The air fills with the scent of jasmine and unwashed hair that is starting to toast between straighteners. A buxom Sonia, experimenting with plum lipstick, smiles and motions for me to sit down and says, “I just got here three days ago, so I don’t know much, don’t ask me complicated questions.” 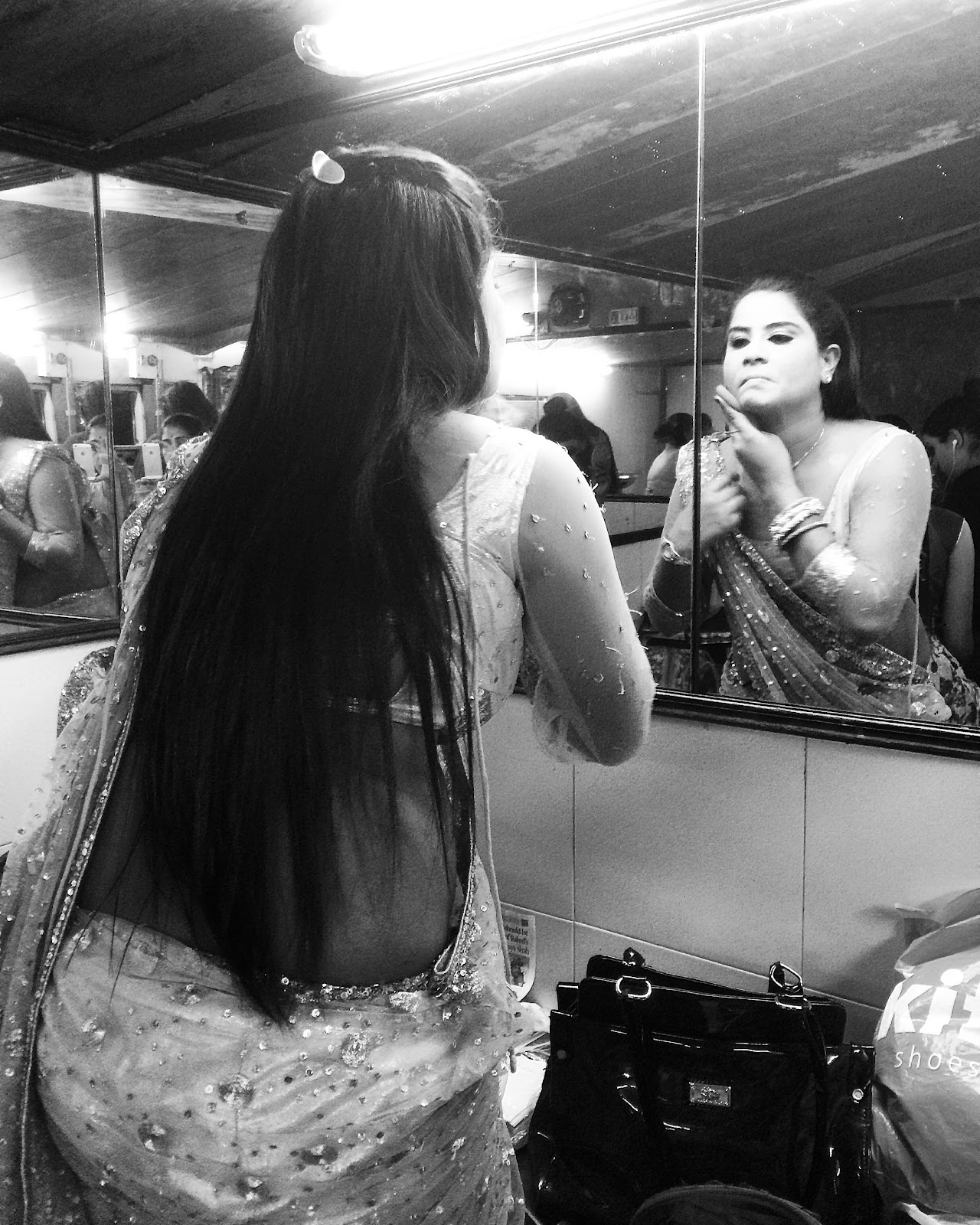 New to the bar but a Mumbaikar through and through, she cocks an eyebrow at my reflection as she makes a dismissive mention of me in a conversation to the stranger she’s on the phone with.

She goes back to winging her eyeliner, when I prod about how long she’s been dancing. She cocks an eyebrow and quips, “I am not a dancer, I am a singer.”

However, 21-year-old Simran who’s fiddling with her two tone lipstick, doesn’t even have to sing. “I just come here and stand. I don’t know how to dance, I can’t even sing,” she giggles. Simran came to Mumbai from Jaipur three years ago to support her family and has been working in the bar since.

There’s another bang at the door and Sarika opens it with more exasperation this time round. A steward barges in barks at the girls, “You could have made at least Rs 500 right now, you’re just sit-ting here dolling up and taking your own sweet time.” The girls sigh and go back to makeup. It is peak hour and the pulsing bass of the music overwhelms the space. The moment is steeped in irony, as the 90s Bollywood track that resounds through the walls, talks of his lover’s pearly whites but the raunchy music video that comes to mind is a stark contrast to the deep lyrics. 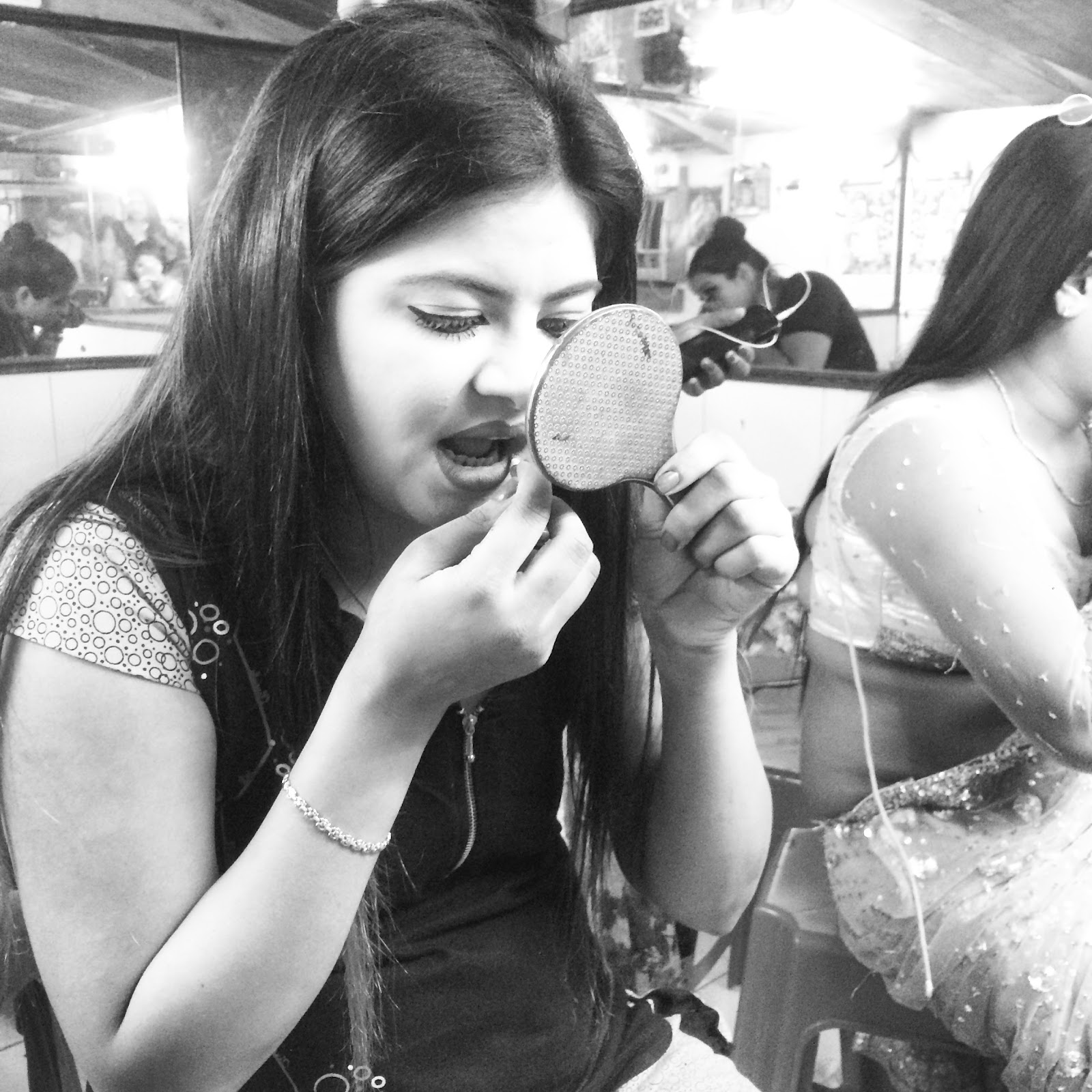 Downstairs, the neon lights bounce off geometric shapes on the wall as the orchestra picks up cre-scendo. Like karaoke without a machine, the singers smile for most of the track that plays from a music system and bring the mic to their mouths occasionally to hum the chorus. Save for the band, each goes about his or her business with blank expressions while the girls stand huddled in a corner

Ikky, 21, also from Jaipur and a Priya employee of 3 years, sashays in confidently. She stands before two young men and whips out her phone and then fixes her hair in the mirror above her customers’ heads. The atmosphere of the room changes. The men, who had settled into sullen leans, sit up, crack their backs, and beckon to the waiters to change their money, 1000 rupee notes exchange for smaller denominations.

Ikky changes position and takes a few steps further before confidently settling in front of a stout man. He is drenched from the rain, but attempts to settle in with the sudden attention he receives from the doe eyed Ikky.

A row of numbered lockers lines the walls near the cashier. Mandra, the head steward shouts over the music, “These lockers were for when we had dancing, the place used to be packed, so we needed the boxes to collect the money from all the tips.” But, with the new act, if bars like these were to switch back to being bars that allowed women to dance, it would mean the girls would have to move to a fixed wage, a step back from progress they made all the way back in 1997. 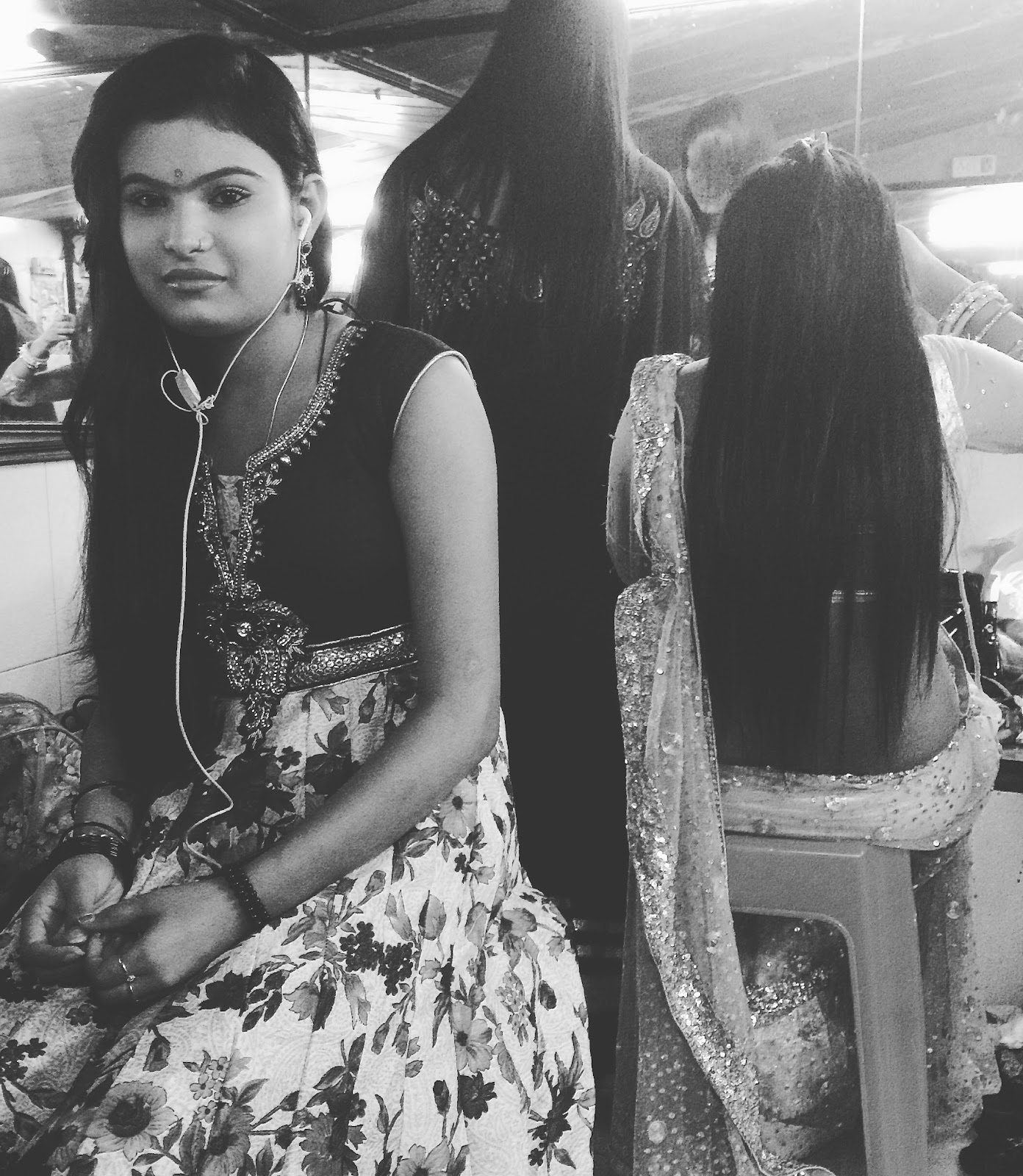 Shashikant Shetty, head of the Indian Hotel and Restaurants Association of India, explains, “We used to give the dancers fixed wages till 1997, but it was the girls themselves who protested and demanded the tips be shared. So now it works on 60:40 tip-sharing and these new rules under this act will put them on backfoot.”

This is perhaps why several bar owners like Yeshwant Shetty, of Priya, are continuing to operate as orchestra bars even if it means less money.

Says Shashikant, “The police are bound to come and harass me and conduct raids if there’s dancing. Because there is so much ambiguity surrounding the law, better we stay orchestra bars and wait for what the court says.”

By now, the customers, it almost appears, are taking this seriously. A table of two young men com-pete with an elderly gentleman for the dancers’ attention as they tirelessly signal to Ikky and some of the older girls to walk over and accept their tips.

“See, it’s simple,” says Sonia pointing to the girls who start shuffling after Ikky takes the lead. “We come into this line because of problems at home, we need the money and we are not in the flesh trade.” Sandeep overhears and guffaws, “The government won’t even provide an alternative, but they want to shut down the bars, so then obviously girls will enter the flesh trade, no?”

“The girls are not harassed, they are not bothered and what they do after they leave my bar is their business. The dance bars have nothing to do with prostitution. If nothing else we prevent it” says Shashikant Shetty.

Kavita slips me a smile as she leaves the stage and allows Ikky to lead the other girls. The customers turn to me in bewilderment as I attempt to hold my ground and look ahead, completely unper-turbed, Simran, then makes her entry and joins the group of young, reluctant girls standing around the orchestra. When one of them is called over, they look around, some petrified, before going over to the customer after one of the stewards offers them a reassuring smile.

Because these orchestra bars like Priya have found a way to work around the act, police sources say they have been asked to come down harder and strictly implement the law. In May, four dance bars allegedly being run without permission were raided and over 80 arrests were made.

Under the new law, the bar owners accused can be sentenced to five years imprisonment and fined upto Rs. 25 lakh. The police have issued licenses to only two bars as per the new guidelines laid down by the Maharashtra government. 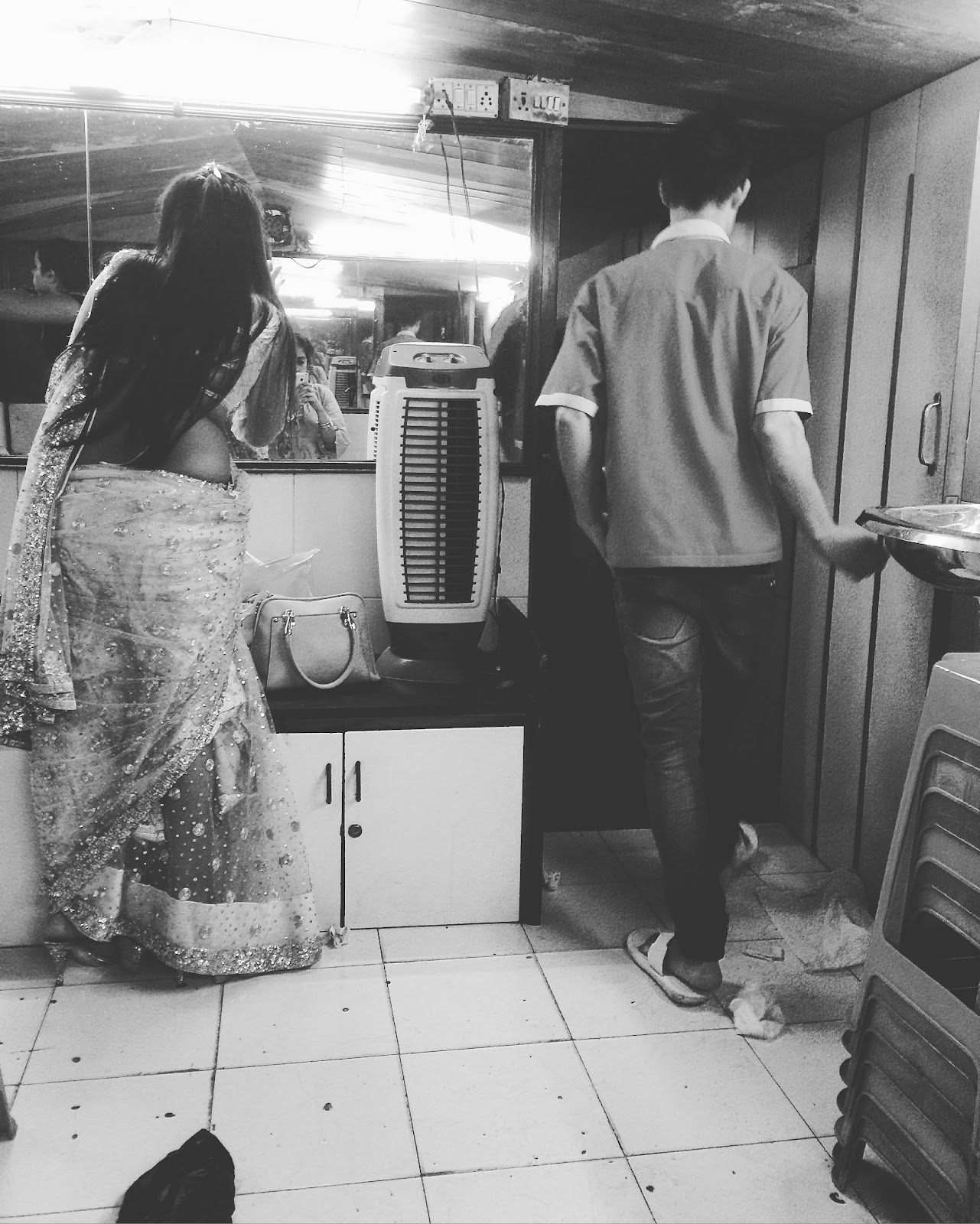 Back in the makeup room, Kavita fans herself before the cooler and looks up at the whirring fan in anguish. “I am from Mumbai. I used to be married but my husband squandered all my hard-earned money, so I left him.” She takes a cotton swab and starts to wipe off her makeup, “I just come here and stand and make money from all the tips I earn. I have a son to support, what is obscene about this?”

Kavita pauses and turns around from the mirror, half her face clean, exposing supple skin and flushed cheeks, “No will come to feed us. Shouldn’t we be allowed to do it ourselves?”