NEW DELHI: Jawaharlal Nehru University students were out in the narrow lanes of Munirka village in South Delhi in the winter night air Friday, inviting curious glances from the by passersby and onlookers.

They sloganeered for Bekhauf Azaadi (unfettered freedom) from patriarchy, communalism and casteism. The night was of a symbolic relevance—it was on December 16, 2012, four years ago, when a 23-year old physiotherapy student was brutally gang-raped on a moving bus by a group of six men, including a juvenile. 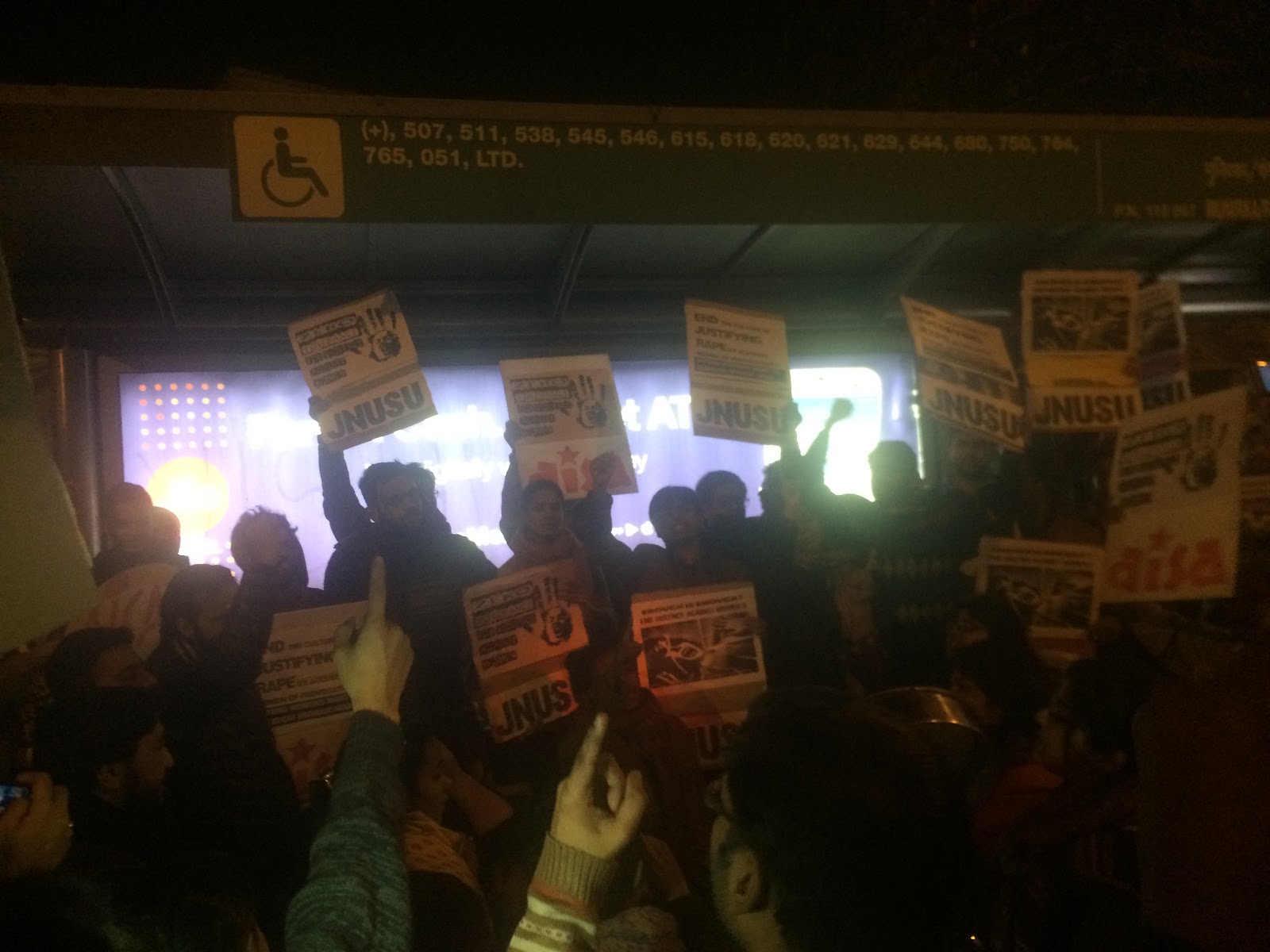 The incident had provoked massive outrage ‘against the prevailing rape culture’; vehement protests by tens of thousands of students that rocked the national capital was mainly led by students of JNU, which is hardly a kilometre away from Munirka bus stop, where the victim had boarded the bus.

The movement raised difficult questions of how women occupy spaces in Indian society, shed the light of the rampant assault on women in the country and provoked questions from newsrooms and colleges to homes and workplaces on women safety in India.

“JNU perceives this movement as an important historical event—an event that comes but once in a lifetime, when people’s movement becomes a symbol of women’s resistance in the face of repression, and that’s why it shall always be remembered. It united women across states, class, religion, and caste and compelled us to question the existence of women in this country…of Dalit women, or Muslim women, of tribal women, of women under AFSPA, and women harassed in colleges, workplaces and streets,” said Gargi Adhikari, a research scholar at JNU.

Every year, students from JNU march at night, ‘reclaiming the spaces that belong to women as well,’ till the iconic bus stand with tambourines playing to the slogans that call for dismantling patriarchy, marital rape, homophobia and intersections of oppressive identities. 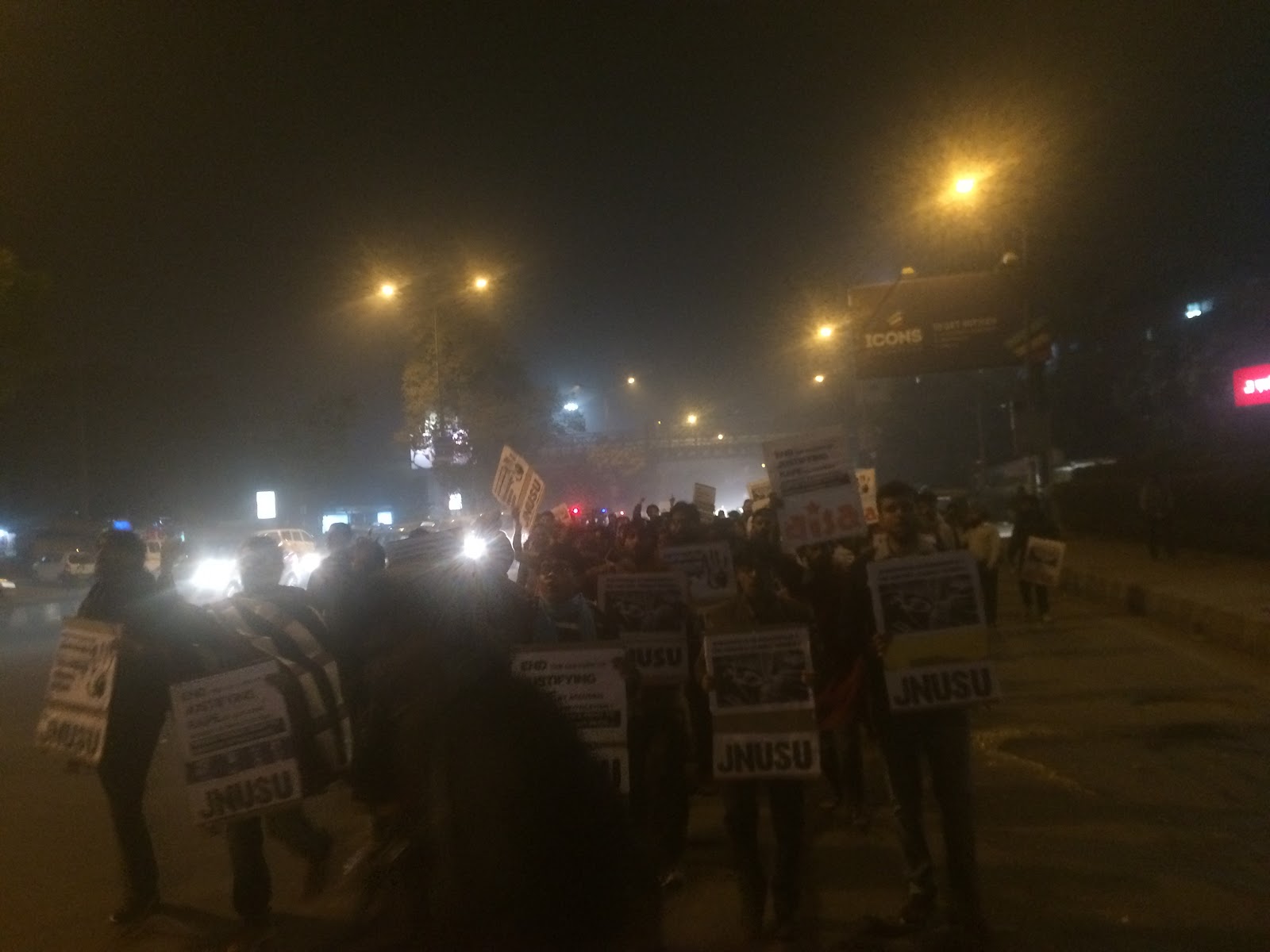 At 10 PM, students gathered at Ganga Dhaba with tambourines and posters and marched through the narrow lanes of residential localities in Munirka, all the while being flanked by policemen and the campus guards. Around a hundred students had participated in the march. The contingent reached the stop at 11 o’clock and then began a series of passionate speeches from across different centres and schools of the varsity.

Due to the absence of the President, Satarupa Chakraborty, General Secretary, JNU Students Union started the protest meeting and addressed the crowd, linking the unchanged realities of the city four years down from the movement. “The right wing forces with their protectionist ideas are strong all over the world. We must fight them with greater strength and vigour…the fight is long, but we shall fight it till is won,” she said.

A host of speakers spoke at length about commonsensical patriarchy that is perpetuated in all spaces, including the most progressive organisations and the universities. It was only this August when a member of AISA, a left political party was arrested for raping a fellow student. Activists focused on the importance of Gender Sensitisation Committee Against Sexual Harassment (GSCASH) and reiterated that it be established in all colleges of the country, and be led by democratically elected individuals. Some speakers also proposed that the Student Movement fight with a greater strength to get the Justice Verma committee recommendations implemented.

GSCASH representative, Aishwarya Adhikari spoke about the systemic injustices faced by women in the country. “ Marital rape, two-finger test, impunity to soldiers to rape and kill…all these are greater evils that are claiming the lives of millions of women every day.” Connecting the dots between capitalism, casteism, and patriarchy, she brought home the idea of “unity of the oppressed,” and demanded that Justice Verma Committee recommendations be implemented soon.