Women As Beasts of Burden

ROURKELA: I woke up at dawn as the train started slowing down before Rourkela in Odisha. I was on my way from Nagpur in 1996 to start work in the Bihar Plateau. Peering outside the dust-covered glass window of my 2Tier AC compartment, I was surprised to see what appeared to be human-like forms running or walking quickly with some unwieldy stuff on their heads.

As the town approached and the train slowed down near a level crossing, the light had become brighter. I saw more clearly. The human forms were women. There were dozens of women carrying large bundles of dried wood on their heads, waiting with wood on their heads patiently for the train to cross the gate for them to resume the journey.

When I spoke about this later with my friend, he shrugged and said they were bringing fuel wood to be burnt in the city’s numerous eateries and hotels. Each head load would fetch some Rs 10, he said. And then, he went into a long harangue about how thousands of such women cause damage to the environment by contributing to deforestation while we only blame the forest timber mafia.

Much later, I was travelling in Nagaland in 2009. The journey was scenic with views of mountain ranges, winding roads crisscrossed with water gushing in streams. It was made all the more picturesque with scores of gun-toting Naga men whom we crossed one at a time, each looking at our vehicle with interest. It was around 11 in the morning. Again numerous human forms were visible in the distance on hills with unwieldy loads on their heads and back.

The bushes along the road, numerous trees, the standing crops and the slight haze made it difficult to be sure whether they were men or women. Several times the car would go closer to them. Then it would become clear that most of these forms were of middle-aged women with wrinkled faces and frail bodies. Reading my mind, my Naga colleague and escort said something like, “Our women work very hard gathering wood, root and other stuff from our hillsides so that they can look after their sons and husbands.” Sure, the sons and brothers and husbands need to be looked after have to carry guns to shoot birds! 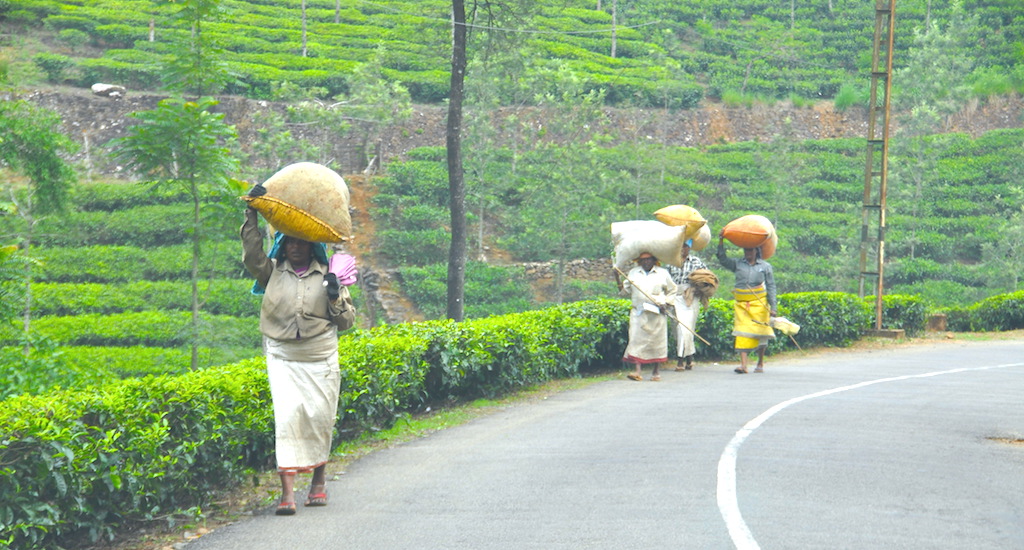 Only the last week I was traveling in rural parts of Kolhapur district. This is one of the most prosperous districts of the country, with its sugarcane farms irrigated by a huge network of canals. As you motor through the roads in the undulating plains of this district, you are amazed at the frequency at which even expensive cars cross or overtake you, leave alone the constant stream of bikes and tractors with laden trollies.

In the evening, the traffic got compounded with these human forms again. The faces and much of their upper bodies were apt to be covered by the overhanging long leaves of the sugarcane tops they carried. I counted 26 women carrying mammoth head loads of sugarcane, and also four men carrying these tied to their bike on the pillion seat. In two places I saw men helping the women lift the head load and adjust it on their heads after which they sped away on bikes in the opposite direction. I gather the sugarcane tops are fed to dairy animals so that the woman can carry milk on her head to the nearest milk collection center.

For anyone traveling through rural India, women carrying water, their household washing, wood, fodder and at times baskets of dung on their heads is an all too common sight. While our rural brothers are quite used to harnessing these delicate beasts of burden with such miscellaneous stuff, it appears this sight is not at all familiar to our engineers or other lofty technology institutions. I am not sure if our medical fraternity has ever researched if women in rural areas have problems in neck or back due to this practice of carrying loads on head.

Engineering institutions are perhaps blissfully ignorant of the need to innovate in this field to reduce the drudgery of women. Well, almost. I know in one hallowed Institution of learning, a student did an M Tech project designing a contraption using which the woman could optimize her capacity to carry head loads of water over steep and difficult paths in hilly parts of Thane district in Maharashtra. Mind you, it would reduce number of her trips for the same volume, but she still remained the carrier.

Then this year in villages in Yeotmal and Ambejogai in Maharashtra, I saw the very first contraption that eliminates the head load, at least for water. It was not a pump and pipeline, though that of course would be ideal. But neither place has assured electricity. This was a simple rolling drum made out of tough HDPE or similar plastic material. The women could fill the drum with water at the well and bring home rolling.

Costing about Rs 2000, the drum was attracting much consumer resistance for the price. The men naturally thought that such gadgets would make their wives lazy. I asked my colleague about it and he told me that the drum was designed and piloted by an American lady as she, unlike our men folk and our engineers, could actually see the delicate members of the fairer sex croaking under the load.

But naturally our engineers should work to send the drones to deliver pizzas in 20 minutes from order and not worry about ways of addressing the head loads and the problems it causes. After all, the country has to be a global and boldplayer. The drone developer will perhaps go to USA for a MS and PhD while the lady who innovates a drum roller comes form USA to solve our problems. This is the new age circular migration of labor.

Why are we so gender insensitive in this country?