Few weeks ago, the Nobel Prize in Physics went to three of the leading scientists for development of LIGO and the gravitational wave discovery - ripples in the fabric of space and time created by objects moving throughout the Universe.

The first ever detection was back in 2015; the fourth ever detection was announced last month. Now an international team of scientists once again, have detected gravitational waves. And this time, the celestial signal stems from a never-before-seen event: the merger of two neutron stars. In contrast to past observations of gravitational waves, the event was also detectable by regular light telescopes, giving scientists unprecedented insight into this cosmic collision. The neutron stars merged in a galaxy called NGC 4993, located about 130 million light years from Earth in the constellation Hydra.

Seven new papers describe the first-ever detection of light from a gravitational wave source. The event, caused by two neutron stars colliding and merging together, was dubbed “GW170817” because it sent ripples through space-time that reached Earth on August 17. Previous detections were observed due to black hole collisions. However, black hole mergers are not expected to produce any electromagnetic radiation (light), meaning they cannot be detected by conventional telescopes. In contrast, binary neutron star (NS-NS) mergers have long been expected to produce an energetic explosion and a plume of radioactive material, generating light, but have never previously been detected. 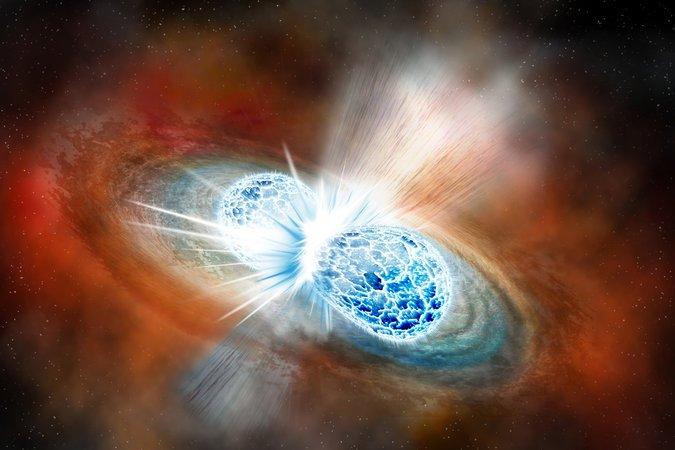 On August 17th at 8:41AM ET, just before LIGO and Virgo were scheduled to stop observations after a months-long run, both of LIGO’s observatories in Washington and Louisiana picked up what looked to be a gravitational wave signal. Immediately, astronomers suspected that it was from two neutron stars colliding, since the wave perturbed LIGO’s instruments for over a minute and a half (much longer than previous signals from black holes, which lasted just fractions of a second). It was a sign that the merging objects were much smaller than black holes.

At the same time LIGO got its signal, NASA’s Fermi space telescope (in orbit around Earth) detected an intense burst of high-energy light, known as a gamma ray burst, coming from deep space. Astronomers have suspected that neutron stars may create these beams of high-energy radiation when they collide because the explosions are so hot and powerful. Detecting a burst at the same time as a wave signal made the astronomers confident they were seeing two neutron stars merge.

Meanwhile, astronomers initially thought Virgo had missed the signal, since it wasn’t showing up in the observatory’s data. But after a further look, scientists realized Virgo had picked it up; the wave signal was just incredibly faint. It turned out the merger occurred in a part of the sky that is a bit of a blind spot for Virgo, which is a by product of the observatory’s location on Earth. 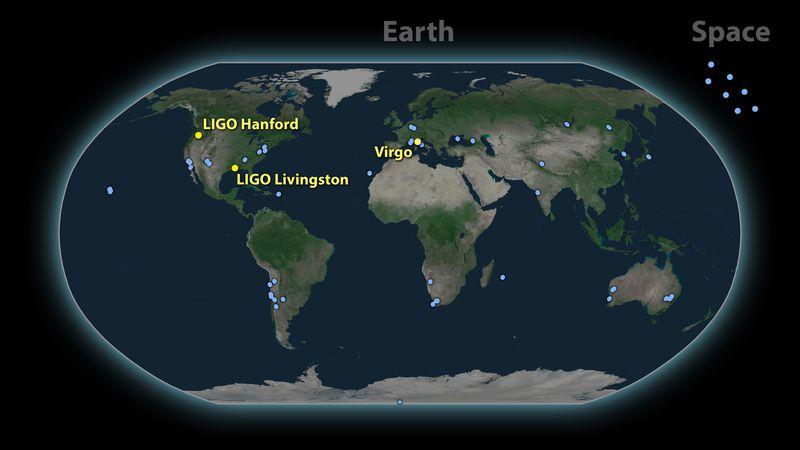 The locations of the three gravitational wave observatories, and the light telescopes that did follow-up observations. Image Credit: LIGO-Virgo

But the fact that Virgo missed it actually helped astronomers figure out where the signal was coming from: the scientists knew the exact spot in the southern sky that Virgo could not see. That knowledge, combined with the data from LIGO’s two observatories, helped the collaboration to pinpoint exactly where the waves were coming from, narrowing the signal’s home to a patch of sky of just 30 square degrees. That’s a small sample of the night sky, which is 40,000 square degrees.

As soon as the LIGO team suspected they had caught a new wave, text alerts were sent to astronomers around the world, telling them to get ready for a hunt. Five hours later, LIGO and Virgo shared a sky map with a general location. Seven hours after that, the aftermath of the collision had been pinpointed and the source of the gravitational waves was discovered.

The ground-based Swope observatory in Chile saw it first, snapping images in visible light. Then other telescopes — both on the ground and in space — found it, too, measuring light from across the electromagnetic spectrum. Astronomers gathered as much data about the event as possible, measuring everything from X-rays and ultraviolet light to infrared and radio waves. 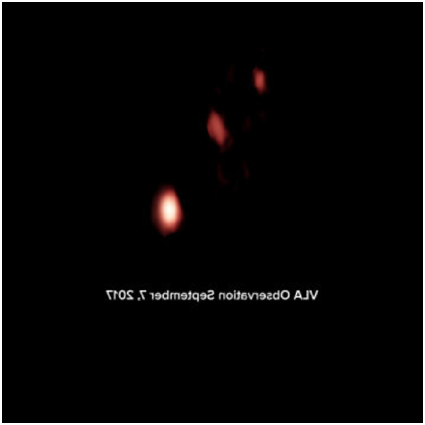 VLA image of the radio emissions coming from the location where two neutron stars collided and generated gravitational waves. The emission from the collision site is the middle object in this image. Image Credit: NRAO/AUI/NSF; G. Hallinan & A. Corsi et al., K. Mooley et al.

After decades of research, the researchers have not only picked up gravitational waves from the stars spiralling to their death, they have also witnessed the fiery collision and aftermath of one of those mergers for the very first time. That makes this discovery the first time any object in the universe has been detected using a combination of gravitational waves and electromagnetic waves. These findings also provide a new direct measurement of the size of the universe. Scientists have been trying to work out the precise size of the universe for decades, but it is hard to do this using traditional astronomy. They use a complicated formula called the "cosmic ladder", which has its limitations. Gravitational waves, however, produce a characteristic sound that tells you how far away their source is — and now the researchers have also traced the source of those waves to a collision in a particular galaxy. So they now have a much more accurate fix on the distance of that galaxy. 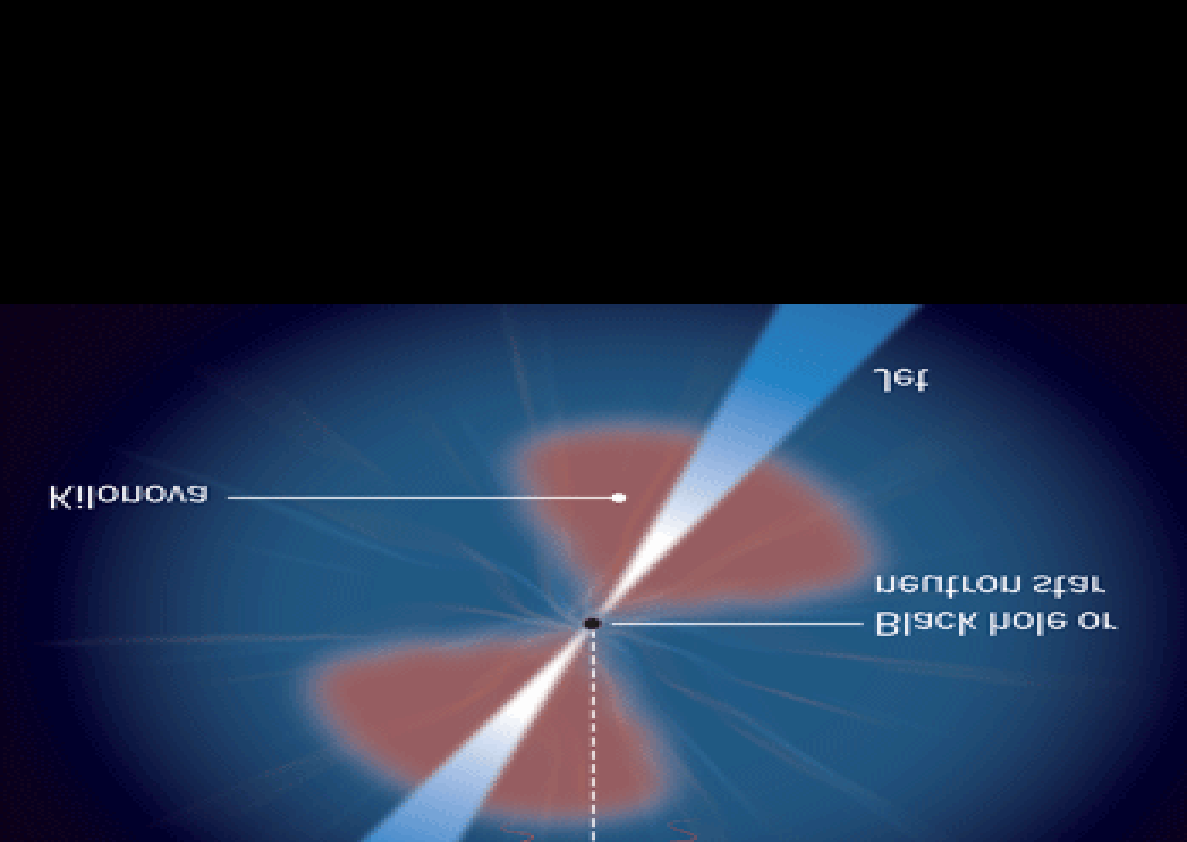 This discovery also helped in determining the origin of heavy elements in the universe. Scientists have long thought that the atomic explosions created by neutron star collisions created all the gold in the Universe. If you look at rare Earth metals they have not been produced in normal stars, they have not been produced by the Big Bang. Instead it is believed that they would have formed in neutron star collisions that would have happened long before the Earth formed from a cosmic cloud. The optical glow observed from the collision as the light decays is the result of gold. Scientists were able to monitor for four consecutive nights and then were able to use the data to understand this very exotic process of producing gold in the distant universe.

Neutron star collision observation also assisted in solving mystery behind Gamma ray bursts. Nearly two seconds after the gravitational waves were detected; the FERMI space telescope registered a short burst of gamma-rays. This blast of energy solves another mystery in itself. Scientists have speculated for the past 50 years that neutron star collisions are behind short gamma ray bursts — rapid jets of high-energy light that can last up to two seconds.

The combination of gravitational wave astronomy and traditional astronomy has once again proved Einstein right. In 1915, Einstein predicted the speed of gravity would be the same as the speed of light, which according to his theory of special relativity is a constant at 300 million meters per second. The different techniques used in this discovery gave scientists the opportunity to compare the two speeds directly. They found that the measurements matched — within one part in a million billion. "So this one little measurement has told us, to a precision that's almost unbelievably good, that these two types of waves travel at the same speed.