The Citizen reports from the social justice rally.

NEW DELHI: It was a peaceful protest, as the organisers promised the police that had got together a ‘welcome party’ for the youth leaders--Kanhaiya Kumar, Jignesh Mevani and others---with water cannons and riot gear. The intention was not of confrontation but to have their say, and press for the release of Bhim Army leader Chandrashekhar who is in jail in Uttar Pradesh. Even as youth struggles from different states came together in an assertion of democracy and pluralism.

Mevani was the hero, having returned as a legislator from the Gujarat elections. But the quieter Kanhaiya Kumar, and the more fiery Shehla Rashid were not far behind with yet another display of determination and sheer courage. Assam youth leader Akhil Gogoi travelled all the way to participate in this demonstration of solidarity, more needed as he is being targeted by the state BJP government and has been arrested at least twice. Gogoi’s battle in fact is probably the toughest as Assam remains out of the Delhi eye, and makes him even more vulnerable. Disappeared JNU student Najeeb Ahmed’s sister was present as well with the platform bringing together the disparate struggle from different parts of India.

The message of love over hate dominated, with Mevani addressing the audience with “we will celebrate valentine’s day and spread love. We believe in love and not hate...the way in which we defeated BJP, that is the reason we are being targeted. We were charged with false charges....we believe in Savitribai Phule and Ambedkar. Therefore let them pull charges; we will fight forward and unite people on the basis of love.” Mevani spoke in defence of jailed Dalit leader Chandrashekhar, saying “we demand Chandrashekher's release...if that is not permitted, that shows what the Gujarat Model stands for.”

Akhil Gogoi brought attention to politics in Assam and the northeast, pointing out that “there is a new amendment in the citizenship law that that the basis of citizenship is going to be on religion basis. This is Section 2, subsection 1. This amendment will increase Assam's demography, and will enable the BJP and RSS to target their vote banks in Assam by polarising the vote along religious lines.” Gogoi then went on to highlight the common struggles in India, saying, “nobody is happy in India. Not the women, not farmers, not citizens. We were promised ‘acche din’.... there is no employment for the youth.” The leader added that Assam was ready to fight the BJP. “All tribes will come together to fight the BJP in Assam,” he said. “We in the northeast fought the BJP and its citizenship bill. We request you to come together and fight with us. We believe in Jignesh Mevani to build new India,” Gogoi added -- indicating that the new alternative youth driven leadership has found common ground in the fight ahead.

Former JNU Student Union's President Kanhaiya Kumar reiterated the importance of the Indian Constitution, saying, "we stand here togday, together for the Constitution of India."

Activists and students from UP, Madhya Pradesh, and neighbouring states had collected for the meeting with copies of the Indian Constitution on full display. MP Adivasi leader Daniel carry the Constitution said, “SC our ST ek hai, do nichde huye bhai (SC and ST are the same, just separated brothers).” He said it was not enough to follow Ambedkar, but to follow and know, by heart, the Constitution.

Advocate Prashant Bhushan was the only senior on the dais, clearly enjoying a close relationship with the organisers and Mevani. He said that cultural diversity is our ‘poonji” with all development emerging from there. “Lekin aaj hum dekh rahe hain ki logo ki bhaagidaar layi nahi gayi” and money has become more important than peoples participation, he said. Bhushan further pointed out that “in the time of the Emergency democracy was challenged, now the government has challenged our sabhyata.”

“Election committee in JNU now ask about gaushalas. This is the state of our democracy today. The government is challenging our freedom of thought,” he said.

Student leader Umar Khalid took to the dias and spoke of the political climate, saying “Modi leher ka gunnara fatt chuka.” He highlighted the role of the youth, saying, “dekh lijiye yuva yaha aapoko hunkar raha hai.” “Humein nafrat nahi chahiye, adhikaar chahiye,” he added. Khalid also spoke of jailed Dalit leader Chandrashekhar, saying “saathi, Chandrashekar Hindu rashtra ke liye khatra hai. Khalid also spoke of Rohit Vemula, saying that when the government has been defeated, Vemula will be right in front, even if the belief is that they’ve killed him. He added that the state is orchestrating media trials as a means of feat. “Our heritage is that of Bhagat Singh, not the heritage of Savarkar,” he added.

Former Allahabad University president Richa Singh spoke of needing to save both the constitution and cultural diversity. “We will definitely free Chandrashekhar,” she added.

The crowd was large and enthusiastic. This was largely because of the media propaganda that the youth hunkar rally ahd been cancelled as it had not got permission. Till the evening the organisers were in touch with the police, and in an informal understanding were allowed to gather at Jantar mantar on the “no violence” condition. Most of the audience was from the Bhim Army that has been demonstrating for the release of its leader Chandrashekhar. This is the first time that Mevani and the Bhim Army came together on this demand in Delhi.

Sadaf, Najeebs sister said, “there is no progress in the case. Our mother has been asked to be patient by the courts. But I fail to keep hope, but today in this meeting again with everyone, hope is renewed. “ She went on to say, “Najeeb will come back but today I see Najeeb in Jignesh, Shehla, Umar, we will fight back.” “It will take time but we will not lose courage,”Sadaf said.

The members of Pinjra Tod campaign were also present. They said that the Kashmir issue was there before, but now fascism, mob lynchings, and love jihad had been added. :Our fight against fascism is not limited to the 2019 elections,” they told The Citizen. 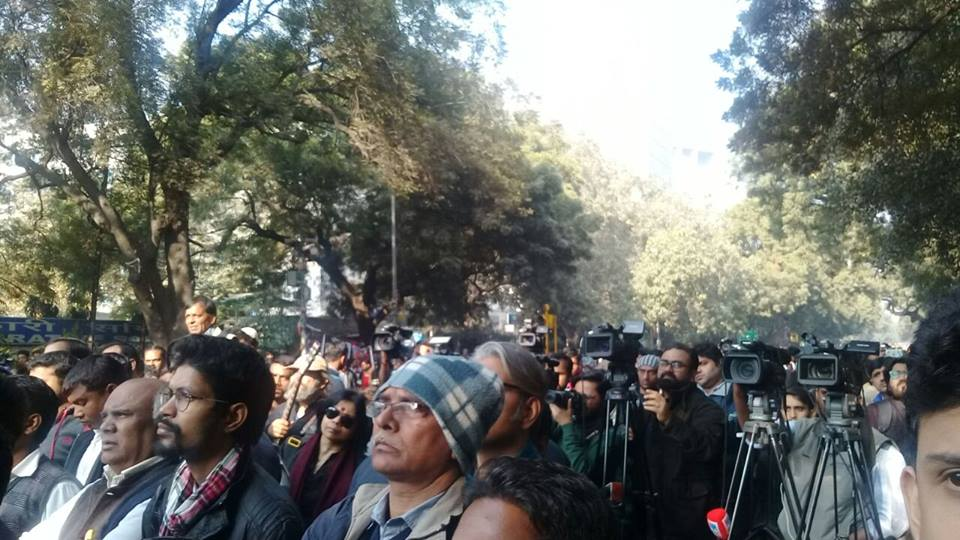 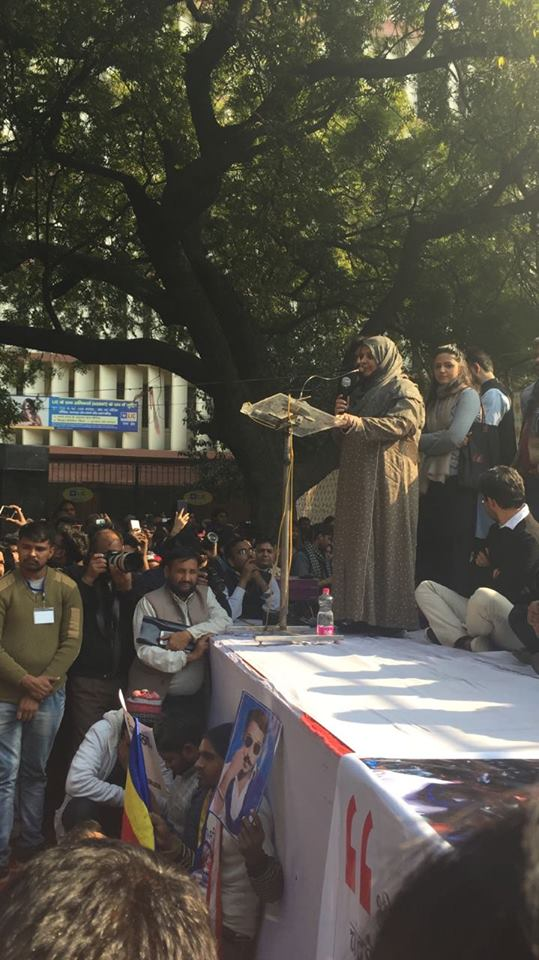 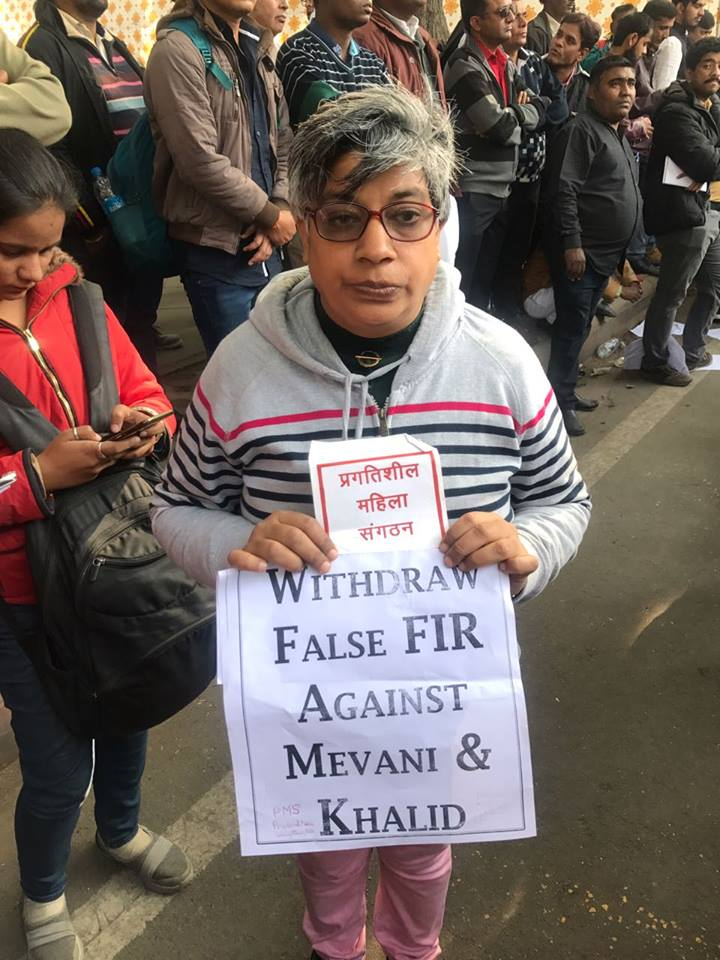 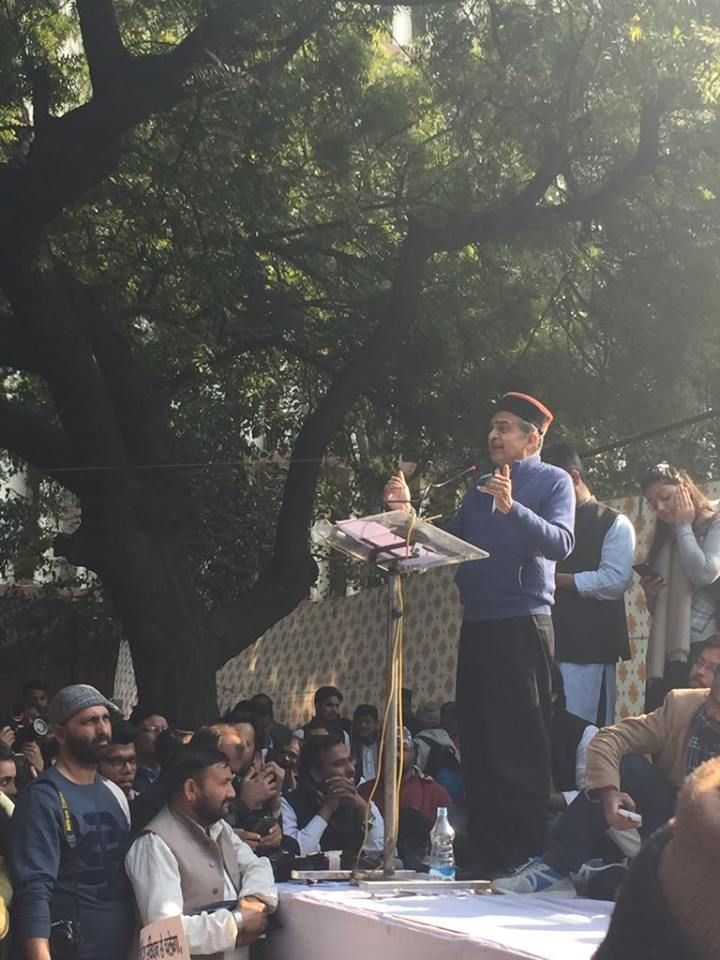 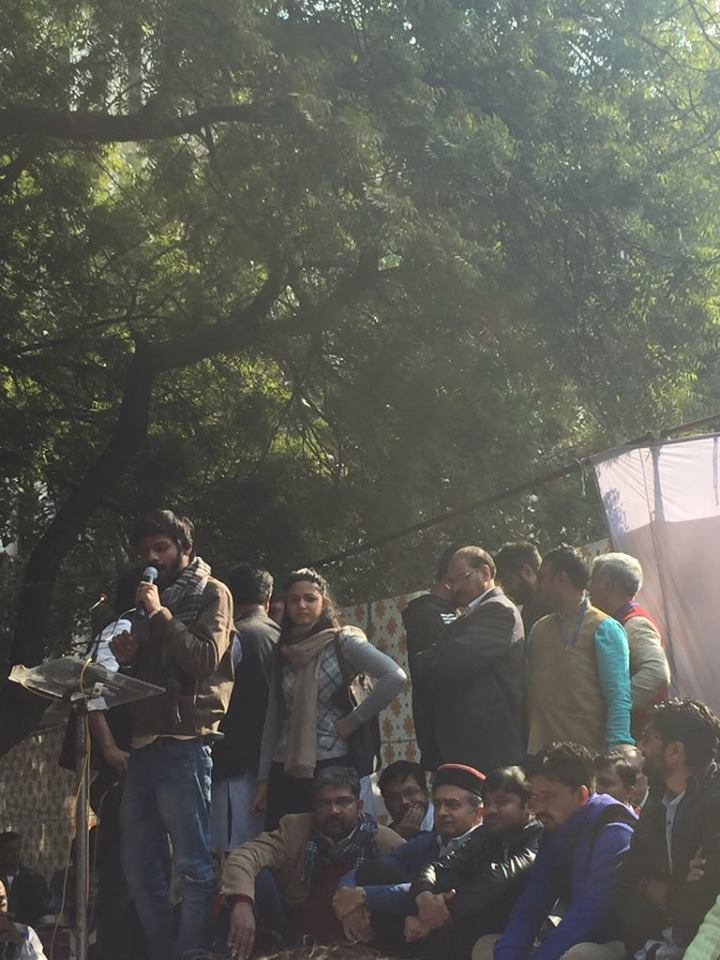 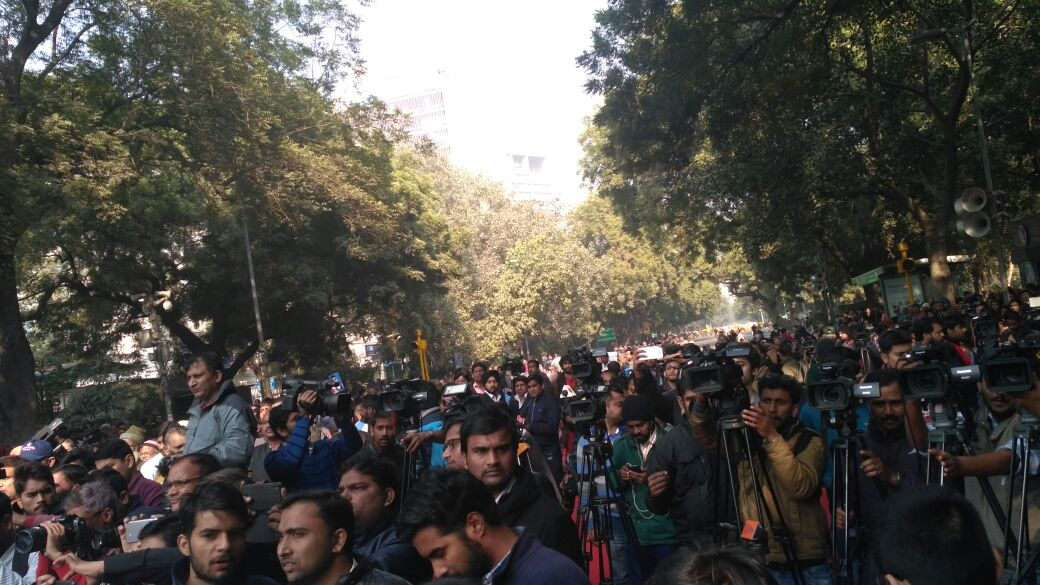 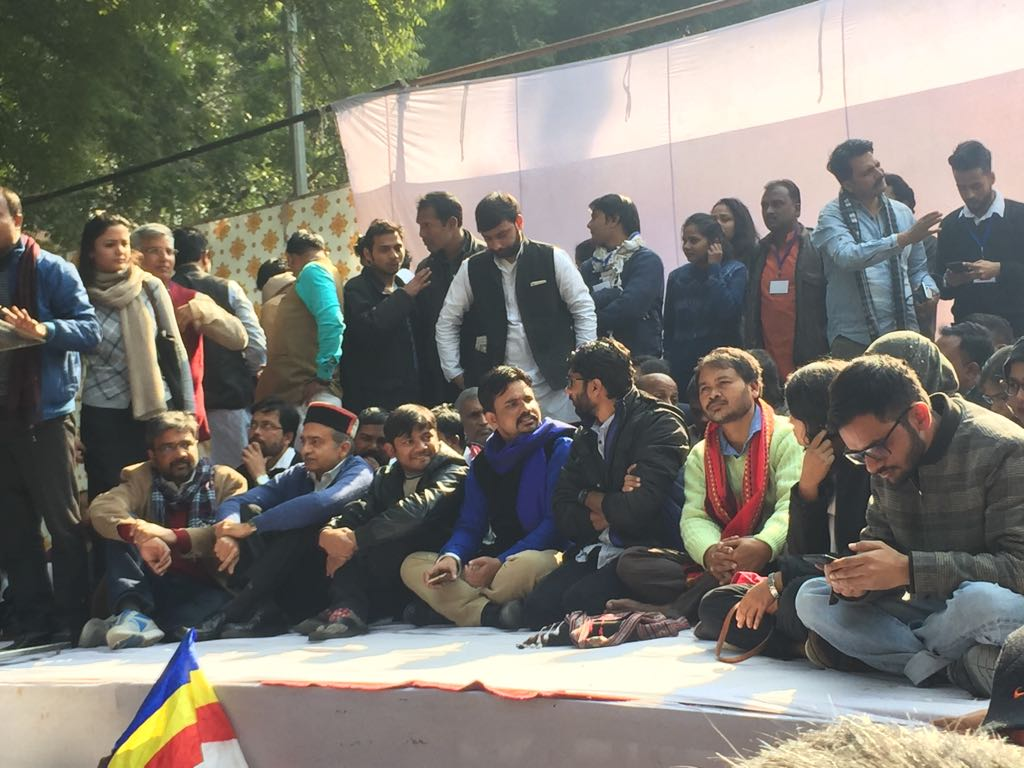 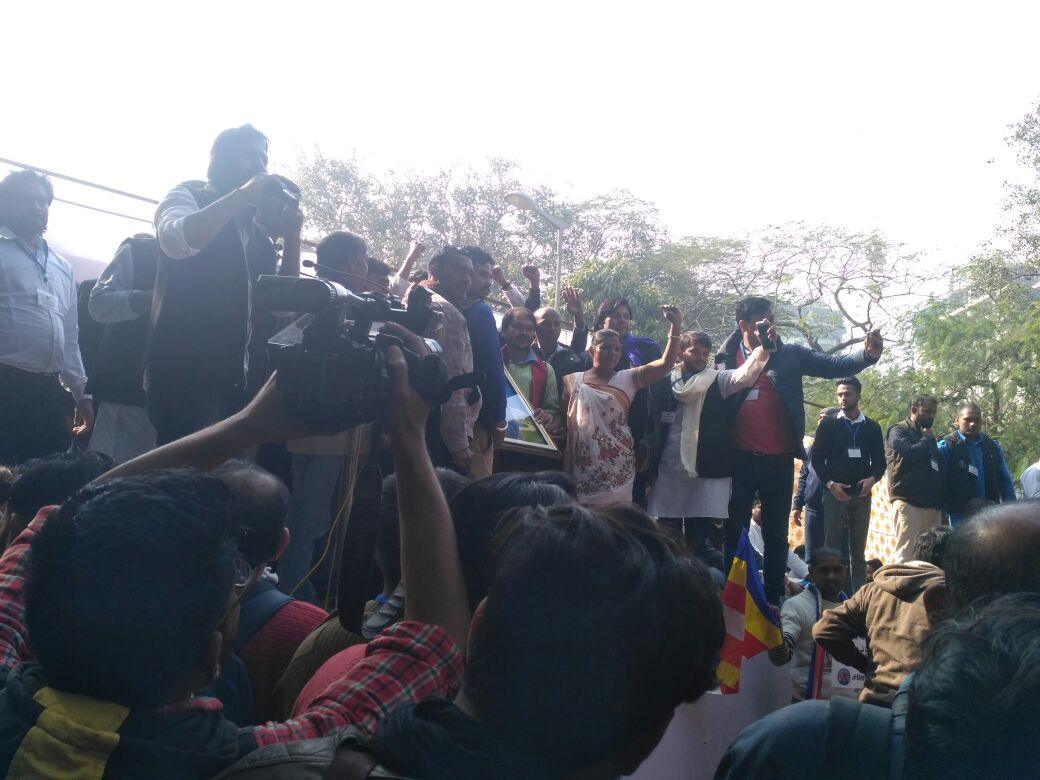 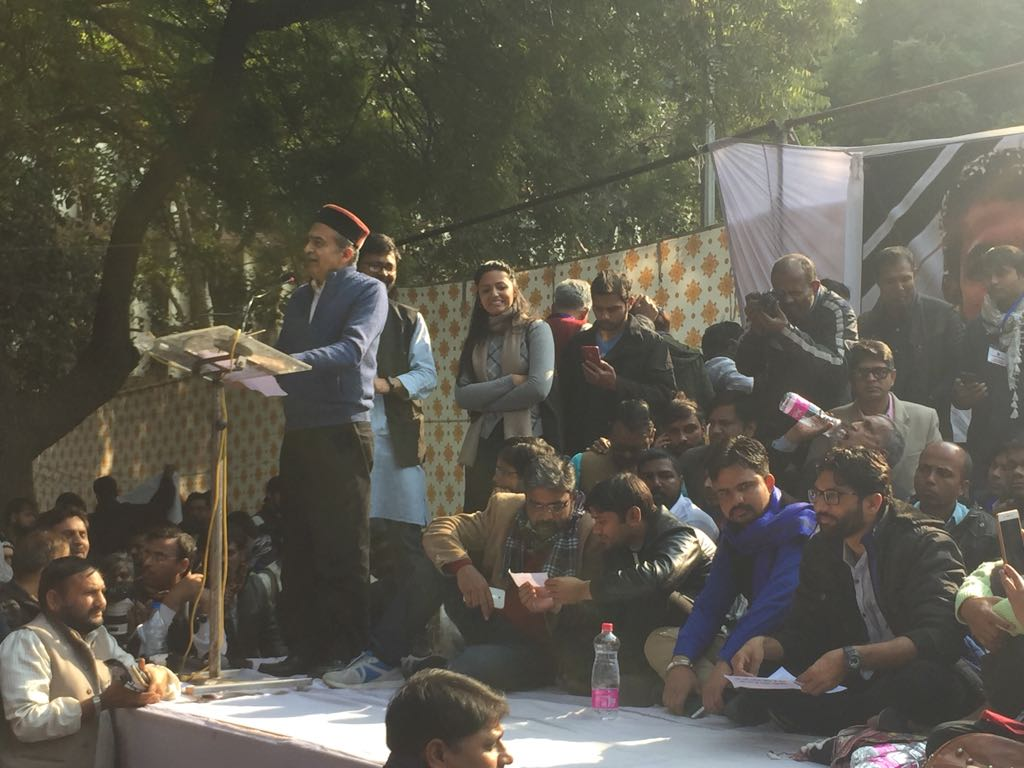 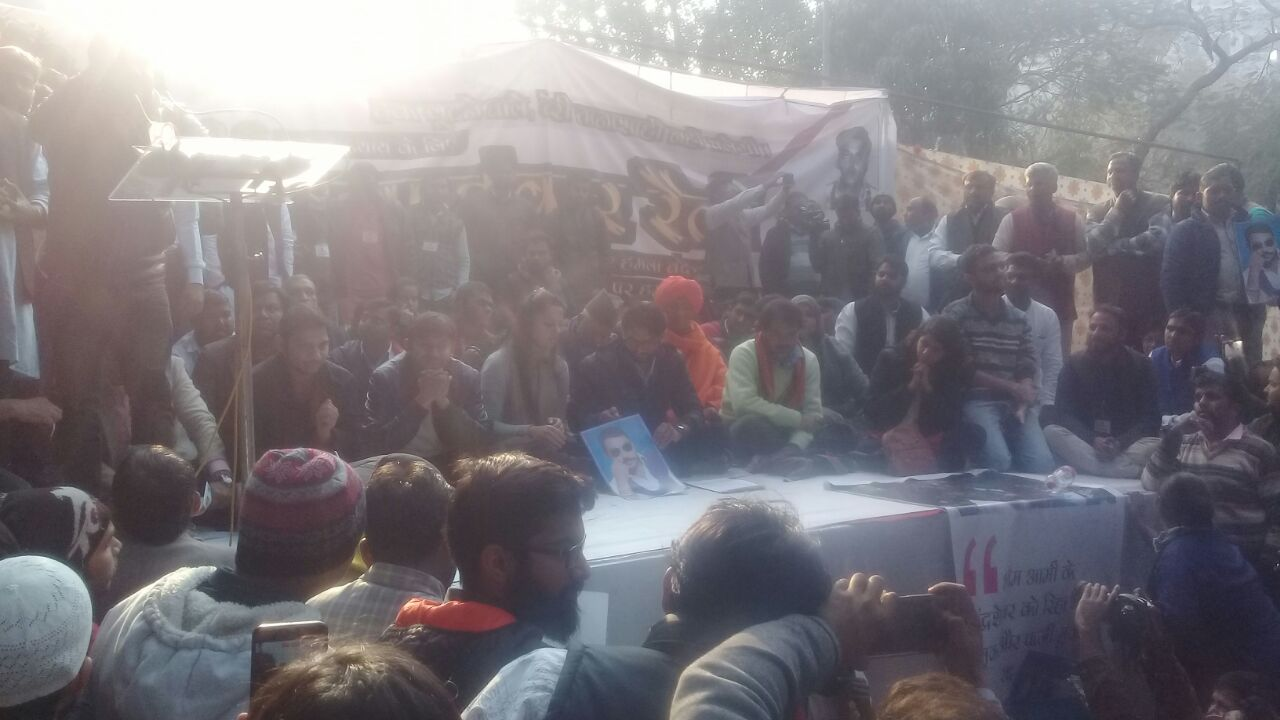