'When You Can't Bring Down Inflation, Unemployment and Crime; You Bring Down Statues'

Sometimes I have to remind myself that I’m living in a democratic country in the 21st century. Right now, is such a time. I almost couldn’t believe the videos I saw of a Lenin statue being brought down a al Saddam Hussein style in Tripura. Next came the news that a statue of iconic Dravidian leader Periyar was vandalised in Vellore, Tamil Nadu. If I didn’t know better, I would be convinced that we’re living in the dark ages … where mob mentality and vandalism precede rule of law.

And what’s worse -- the acts of mob violence and vandalism seem to have official support. Periyar’s statue was vandalised AFTER Tamil Nadu BJP leader H Raja said that EV Ramasamy, commonly known as 'Periyar', would meet a fate similar to Lenin, whose statue had been pulled down amidst violence in Tripura. 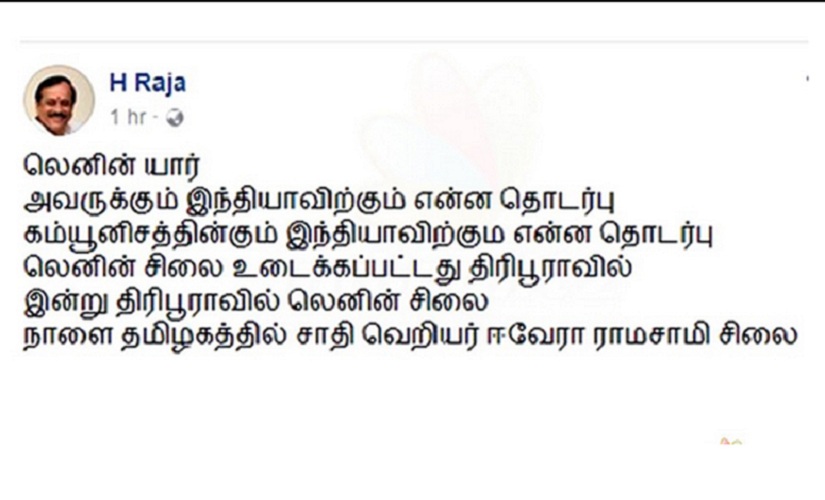 In case you live under a rock and don’t know who Periyar is … he was a activist and politician who fought against Brahmanical supremacy. He is revered as a champion of the Dravidian movement in south India.

Meanwhile, Tripura remains on high alert, with reports that CPIM party member are in hiding as BJP cadre rampage across the state after winning the elections. Two statues of Lenin were brought down within a span of 24 hours.

I shudder as I remind myself that this is ‘democracy’ at work… the BJP might have won the elections on a popular mandate, but since when does that give its members the right to take the law into their own hands and spread violence and terror, let alone bring down statues just because they don’t agree with the ideology they represent?

What is going on? 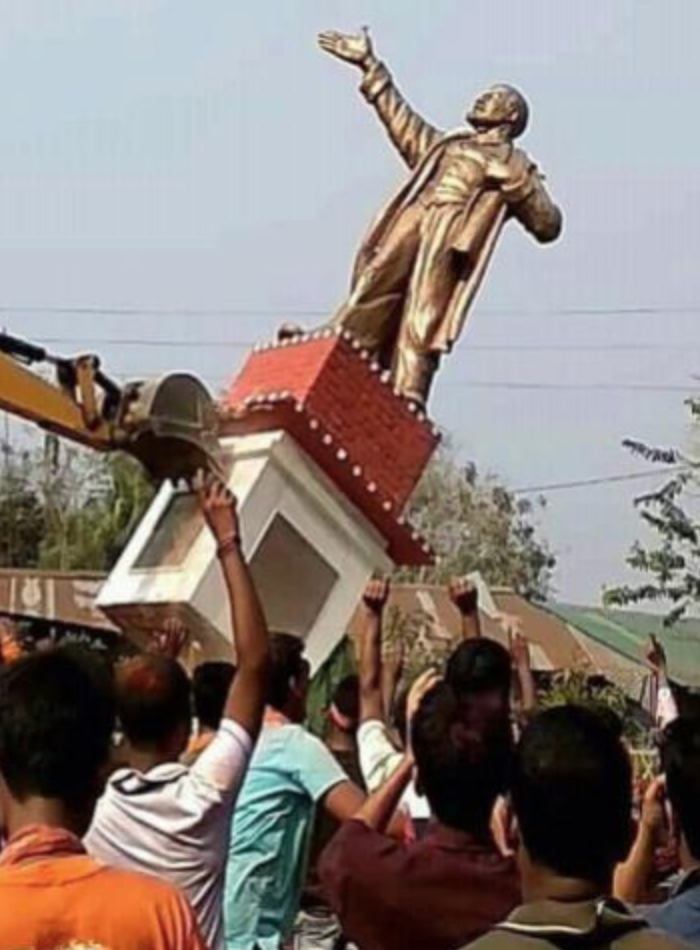 Later, Roy tweeted: “I am advised that pulling down statues (Lenin’s or anyone else’s) unless done by lawfully empowered authorities, qualify as ‘Mischief’ under Indian Penal Code. They are bailable and non-cognizable offences. Trying to blow them up to something like rioting or murder is unwarranted.”

Sometimes, I really need to work hard to remind myself that we’re actually in a democracy in the 21st century and not a fiefdom in the dark ages. This is one of those times.

The only silver lining is that I don’t seem to be alone in my outrage. 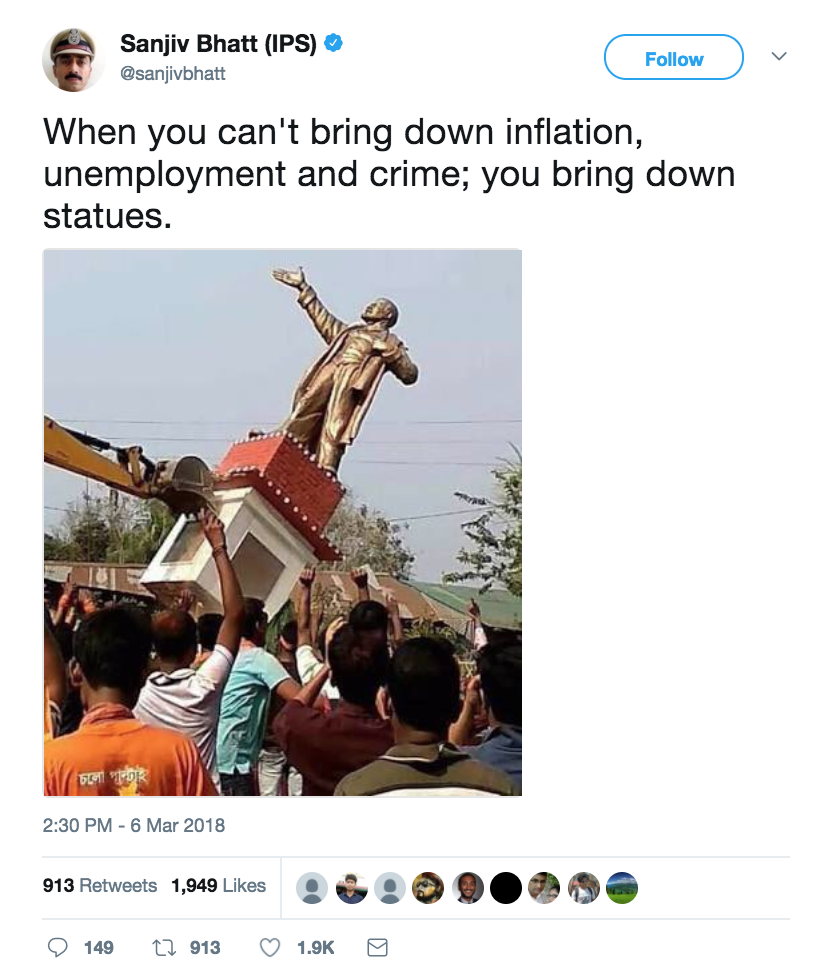 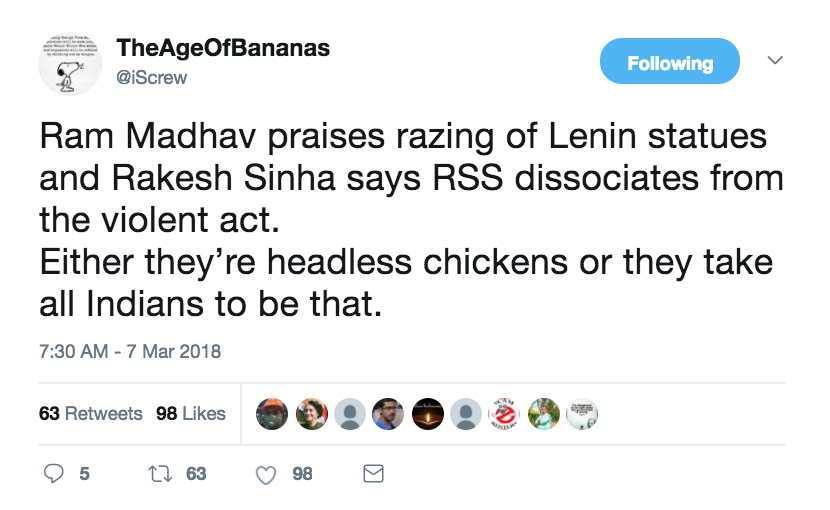 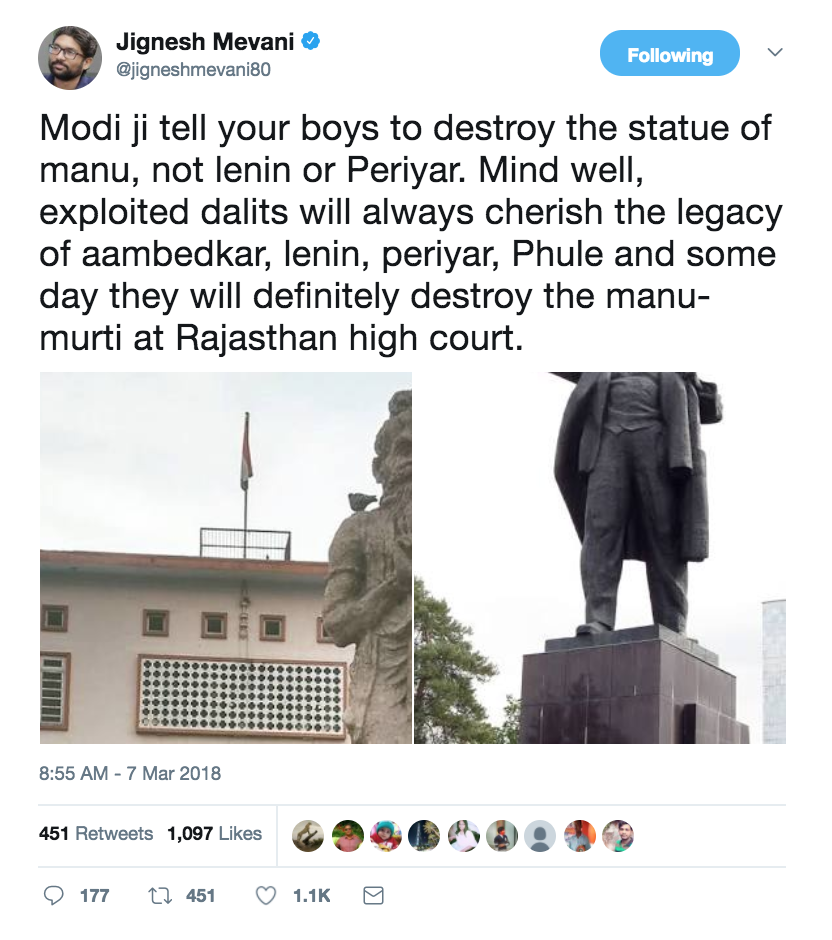 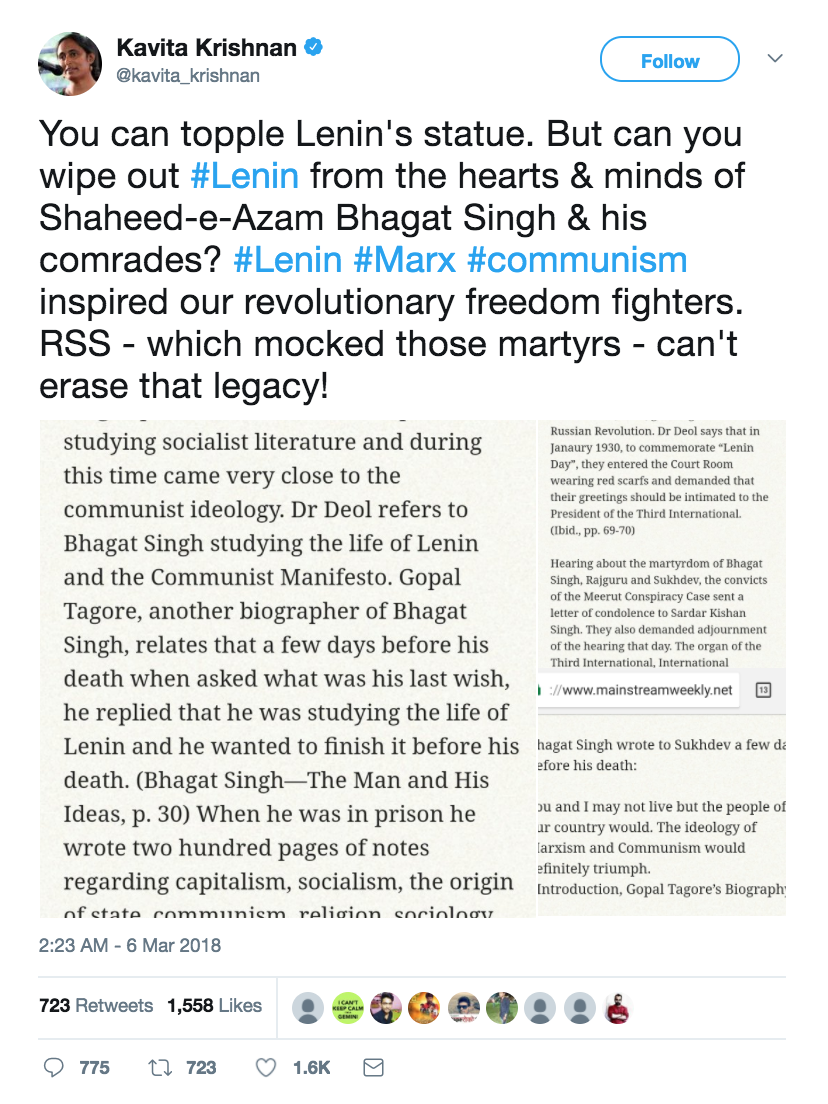 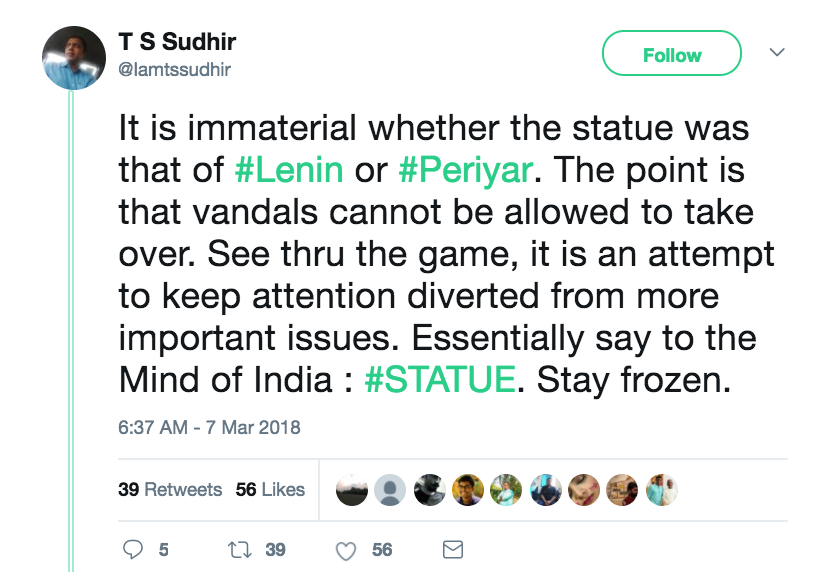 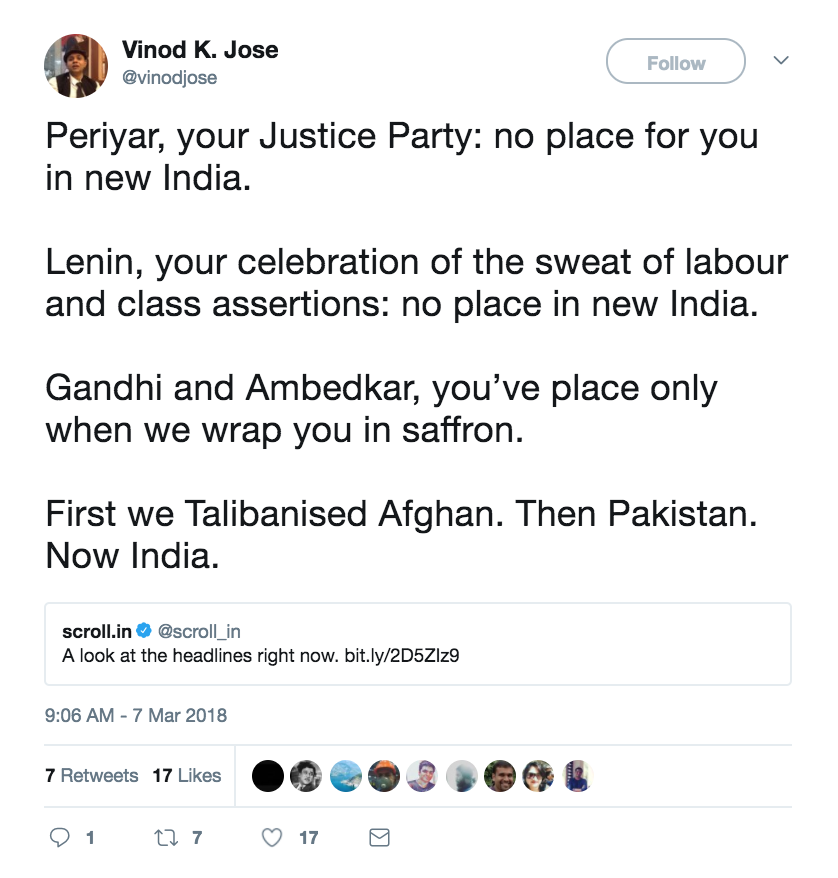 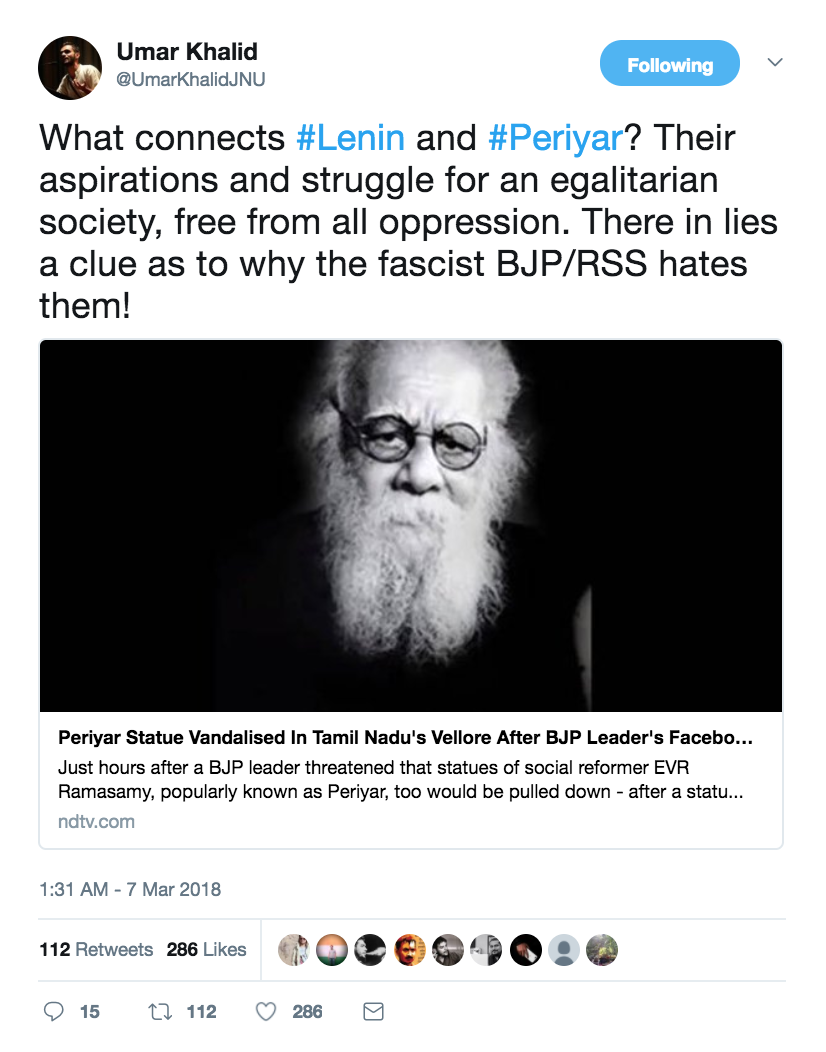