Lies spread faster than the truth.

Lies spread faster than truth, and that seems to be a fact with a massive study spanning a period of ten years coming decisively at this conclusion. The study, published in Science on Thursday, analyses every major contested news story in English across the span of Twitter’s existence.

That’s over 126,000 stories, tweeted by 3 million users, over more than 10 years. The study concludes that when it comes to social media, fake news, lies and hoaxes reach more people, penetrate deeper into social networks, get more engagement, and spread much faster than accurate news stories.

“Falsehood diffused significantly farther, faster, deeper, and more broadly than the truth in all categories of information, and the effects were more pronounced for false political news than for false news about terrorism, natural disasters, science, urban legends, or financial information,” the study states.

“We found that false news was more novel than true news, which suggests that people were more likely to share novel information. Whereas false stories inspired fear, disgust, and surprise in replies, true stories inspired anticipation, sadness, joy, and trust,” it notes.

“Contrary to conventional wisdom, robots accelerated the spread of true and false news at the same rate, implying that false news spreads more than the truth because humans, not robots, are more likely to spread it,” the study added.

The ambitious study classified news as true or false using information from six independent fact-checking organizations that exhibited 95 to 98% agreement on the classifications.

The study is a very important contribution to understanding news in the age of social media, mainly because new social technologies, which facilitate rapid information sharing and large-scale information cascades, can enable the spread of misinformation (i.e., information that is inaccurate or misleading). Given that more and more of the information being generated and passed on is now guided by these new technologies, there is a need to understand how they are shaping the media and information landscapes of today.

The study, however, avoids using the term ‘fake news’ -- noting that the term has become politically polarised. The study states, “In our current political climate and in the academic literature, a ﬂuid terminology has arisen around “fake news,” foreign interventions in U.S. politics through social media, and our understanding of what constitutes news, fake news, false news, rumors, rumor cascades, and other related terms. Although, at one time, it may have been appropriate to think of fake news as referring to the veracity of a news story, we now believe that this phrase has been irredeemably polarized in our current political and media climate. As politicians have implemented a political strategy of labeling news sources that do not support their positions as unreliable or fake news, whereas sources that support their positions are labeled reliable or not fake, the term has lost all connection to the actual veracity of the information presented, rendering it meaningless for use in academic classiﬁcation. We have therefore explicitly avoided the term fake news throughout this paper and instead use the more objectively veriﬁable terms “true” or “false” news.”

The results, however, apply to news overall -- whether the terminology of choice be ‘false’ or ‘fake’. A key methodology of the study was to examine ‘rumour cascades.’ The student notes: “As a rumor is retweeted, the depth, size, maximum breadth, and structural virality of the cascade increase (Fig. 1A). A greater fraction of false rumors experienced between 1 and 1000 cascades, whereas a greater fraction of true rumors experienced more than 1000 cascades (Fig. 1B); this was also true for rumors based on political news (Fig. 1D). The total number of false rumors peaked at the end of both 2013 and 2015 and again at the end of 2016, corresponding to the last U.S. presidential election (Fig. 1C). The data also show clear increases in the total number of false political rumors during the 2012 and 2016 U.S. presidential elections (Fig. 1E) and a spike in rumors that contained partially true and partially false information during the Russian annexation of Crimea in 2014 (Fig. 1E). Politics was the largest rumor category in our data, with ~45,000 cascades, followed by urban legends, business, terrorism, science, entertainment, and natural disasters (Fig. 1F).” 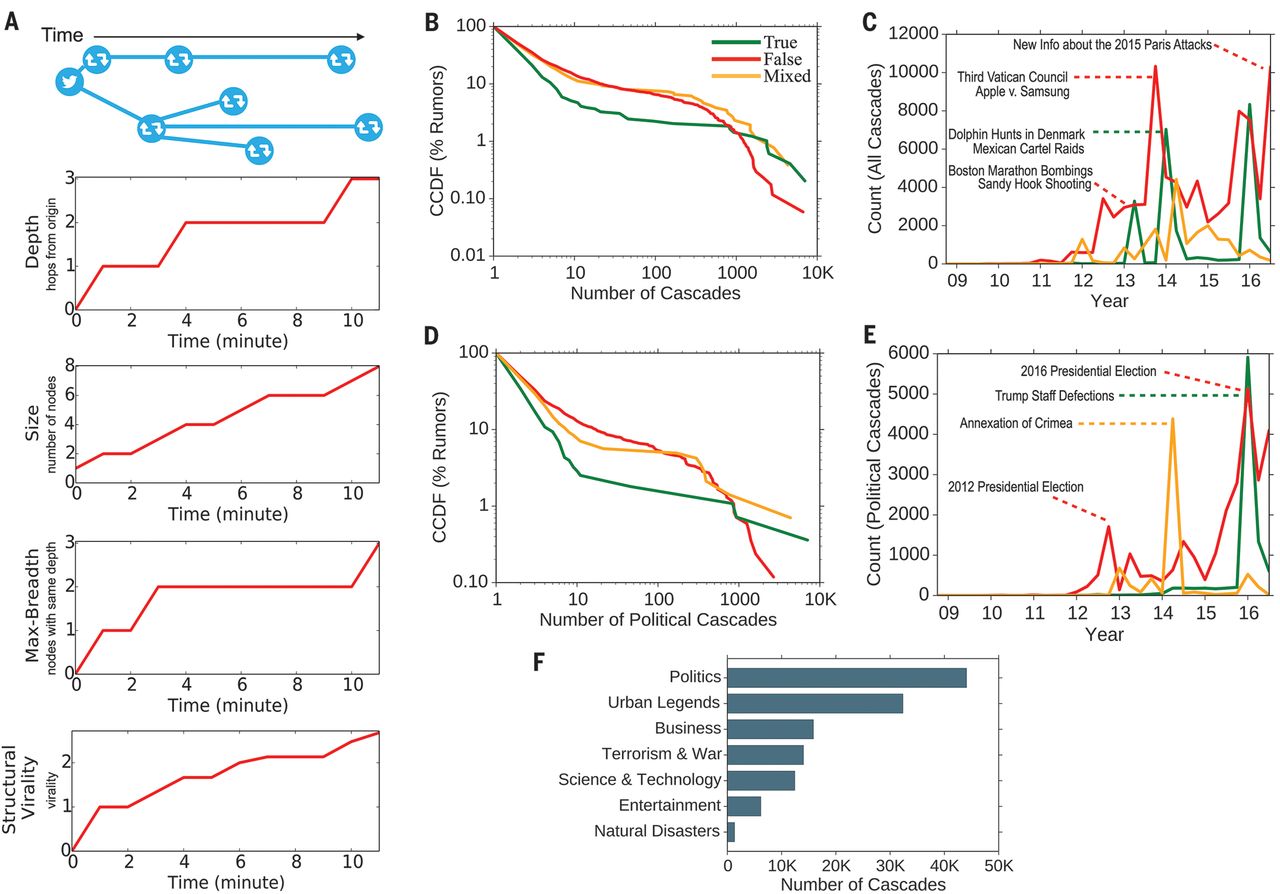 The study analyzed the diffusion dynamics of true and false rumors, and found that falsehood diffused significantly farther, faster, deeper, and more broadly than the truth in all categories of information.

A significantly greater fraction of false cascades than true cascades exceeded a depth of 10, and the top 0.01% of false cascades diffused eight hops deeper into the Twittersphere than the truth, diffusing to depths greater than 19 hops from the origin tweet (Fig. 2A). Falsehood also reached far more people than the truth. Whereas the truth rarely diffused to more than 1000 people, the top 1% of false-news cascades routinely diffused to between 1000 and 100,000 people (Fig. 2B). Falsehood reached more people at every depth of a cascade than the truth, meaning that many more people retweeted falsehood than they did the truth (Fig. 2C). The spread of falsehood was aided by its virality, meaning that falsehood did not simply spread through broadcast dynamics but rather through peer-to-peer diffusion characterized by a viral branching process (Fig. 2D).

Further, when estimating a model of the likelihood of retweeting, we found that falsehoods were 70% more likely to be retweeted than the truth, even when controlling for the account age, activity level, and number of followers and followees of the original tweeter, as well as whether the original tweeter was a verified user.

The study concludes with the message that false news can drive the misallocation of resources during terror attacks and natural disasters, the misalignment of business investments, and misinformed elections. Unfortunately, although the amount of false news online is clearly increasing, the scientific understanding of how and why false news spreads is currently based on ad hoc rather than large-scale systematic analyses. The importance of this study lies in the analysis of all the verified true and false rumors that spread on Twitter and confirms that false news spreads more pervasively than the truth online. It also overturns conventional wisdom about how false news spreads. Though one might expect network structure and individual characteristics of spreaders to favor and promote false news, the opposite is true. The greater likelihood of people to retweet falsity more than the truth is what drives the spread of false news, despite network and individual factors that favor the truth. Furthermore, although recent testimony before congressional committees on misinformation in the United States has focused on the role of bots in spreading false news, the study concludes that human behavior contributes more to the differential spread of falsity and truth than automated robots do. This implies that misinformation-containment policies should also emphasize behavioral interventions, like labeling and incentives to dissuade the spread of misinformation, rather than focusing exclusively on curtailing bots. “Understanding how false news spreads is the first step toward containing it,” the study concludes.