Government, Via the VC, Works Overtime to Turn JNU Into An Academic Prison

NEW DELHI: The government, through a pliable Vice Chancellor M.Jagadesh Kumar, is warring with the faculty and students of Jawaharlal Nehru University ever since it came to power and used the police to crack down on students doing little more than holding one of the customary meetings in the campus. The media blitz that accompanied the propaganda at the time, might have muted somewhat but remains ranged against JNU for its liberal, democratic, campus.

A series of decisions and pronouncements by the University administration to curb academic freedoms have kept the JNU Students Union and Teachers Association on its toes, with protests and demonstrations eating into the academic years. Most recently the Executive Council of JNU has set up a three member enquiry committee against the Deans and Chairpersons of Centres, who have opposed the administration’s decision to implement compulsory attendance system in the varsity.

Student and Teachers’ Unions of JNU have repeatedly opposed the introduction of the 75% attendance model, that has been introduced in the university from the monsoon semester. In a report by The Indian Express, an official of the varsity is said to have confirmed the move against Deans and Heads of Centres with, “If somebody says they cannot implement a rule, they are defying authority. The EC had decided compulsory attendance will be implemented, so not implementing it is problematic… If I was the Chair, I better quit rather than say that I will not implement it.”

On February 27, the Office of Dean of Students issued two circulars notifying a revision in mess admission dues, guest meal charge and fine for late payments. Refundable mess security charges has been increased from Rs. 2700 to Rs. 4500, while the late payment of mess bill has been increased to Rs. 20 from Re. 1, per day. Additionally, a seven member committee has been constituted to review the matter. 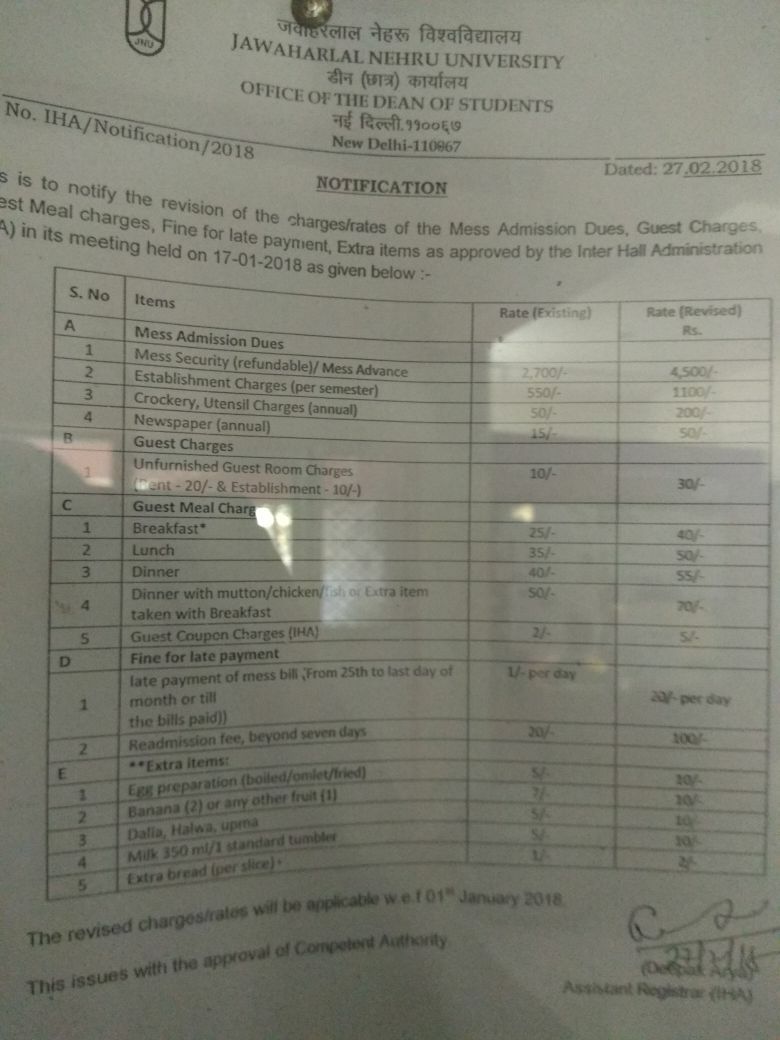 ‘This is an outrageous act of the administration. How are the students supposed to pay their bills when they receive a meagre amount of Merit-cum-Means scholarship of Rs. 2000 or Rs. 5000 as Non-Net scholarship? All we want is the Vice- Chancellor (VC) to hold an Academic Council (AC) meeting which was to be held on February 23, 2018. After the students and the teachers refused to accept the compulsory attendance system, the VC has indefinitely postponed the AC meeting. Scholarship of students, most of who come from disadvantaged backgrounds are being held on flimsy pretexts as they refuse to comply with any of its dictates’ Sarthak Bhatia, JNUSU councillor said to The Citizen.

A complaint against some students have been registered by Umesh Kadam, Dean of Students JNU for allegedly manhandled him on campus. ‘JNUSU had called for a protest at Dean of Student office on 12 March, at 11:30 AM. The DoS gracefully invited the student representatives into his chamber for a thorough discussion on their demand. While the discussion went on till 2:30 PM, when more than 15 agitating students barged into DoS and became very violent. They continuously shouted slogans, latched the door and blocked with a sofa. When the DoS tried to go out of the office for lunch, they pushed, hurled abusive language and manhandled him…….JNU administration condemns this physical assault and the unacceptable behaviour of JNUSU ld agitators. The security unit of JNU has filed a police complaint and the Chief Proctor’s office will investigate this incident and take appropriate action as per university rule.’ 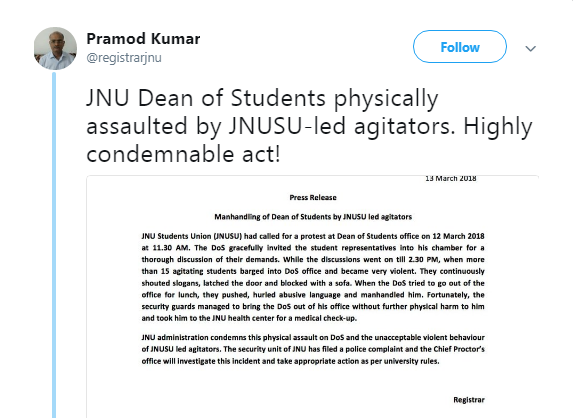 The JNUSU has strongly countered this with a statement that reads:

“Another Round of Victimisation and Witch-Hunt of students and teachers by JNU Administration!

1. On the 12th of march, 2018 the JNUSU gave a call for Dera Dalo protest at the Dean of Students Office at 11:30 am to discuss the issue of arbitrary fee/mess charges hike. All hostel presidents and the JNUSU, represented by the IHA convenor, Simone Zoya Khan demanded a meeting with the Dean of Students.

2. A meeting was called for and the meeting went started around 12:00 hours. The hostel presidents along with the JNUSU participated in the meeting held in the DoS office.

3. With the meeting reaching a deadlock students were being asked to assemble outside the Deans office, without blocking any official/staff. However, the security led by Ramesh Pawar confined the JNUSU VP, Simone Zoya Khan along with other hostel presidents from around 1:45 pm onwards.

4. As the students waiting outside received this message from one of the students leaving the DoS, they entered the DoS to ensure that the illegal confinement of students, both boys and girls, was immediately lifted at around 13:59 hours.

5. As they approached the door, they tried to talk to the guards. Instead more guards were called in by Ramesh Pawar, who instructed them to physically manhandle students and push them out. One of the student was assaulted by one of the guards. However, following this, the guards were forced to open the gate and the meeting resumed. Students waited outside the Dean’s office, to ensure that the illegal confinement of students is not repeated again. Entry/exit remained open, as the DoS II Madhav Govind also entered and left the DoS I office without any obstruction. Other staff members also entered and exited the office without any obstruction.

6. As the deadlock in dialogue continued, the guards under the instruction of Ramesh Pawar and Sukhbir tried to disperse the students using brute force from 15:00 hours onwards.

7. Peacefully protesting students were beaten up by the security personnel while the students pleaded with the DoS to resume talks, instead of being a mute spectator to the assaults on students.

10. The events have been clearly recorded in the CCTV camera number 1 placed inside the DoS office, now made public by the JNU administration with malafide intentions.

JNU Administration has declared an all-out war on students and teachers. From the beginning of 2016, students have been falsely accused and framed through false FIR's and numerous proctoral enquiries, and spate of punishments. The JNU Administration in its latest move has made admission process totally non-transparent, scuttled reservations and violating constitutional provisions. It has also increased hostel mess charges without being passed in IHA or any other meetings.

Now threats are being issued against faculty members for even pointing out the illegality of administrative impositions and undemocratic decision making. In this process students protesting peacefully and democratically against these anti Student moves have been beaten up by JNU Administration through security officials.

A complaint against JNU security officials has been filed with the Delhi police.” 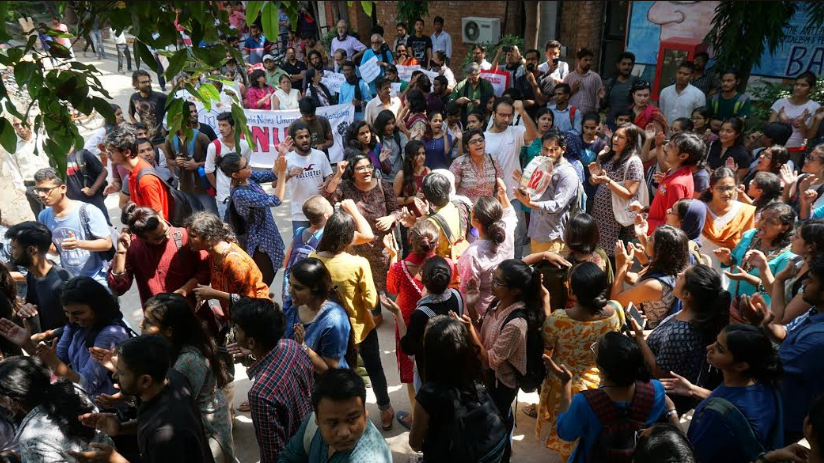 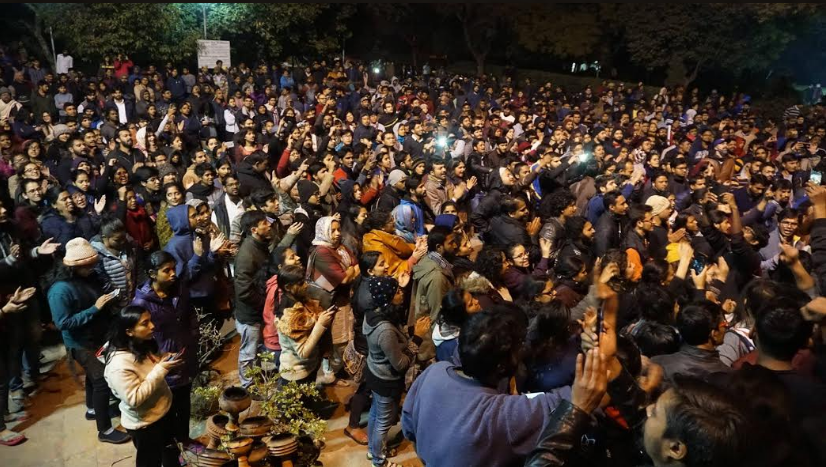