SOAS India Society on PM Modi’s Visit to the UK

On April 18 2018, SOAS India Society in support of the South Asia Solidarity Group (SASG) undertook a protest and march against the increasing majoritarianism and communalism in India. We were also joined by the Caste Watch UK organisation. We demonstrated in front of Downing Street and then marched to Parliament Square. In a great show of support, there were students, academicians, activists sloganeering against the rising fascism in India, shielding of rapists and murderers, and demanding accountability from the current government for all the wrongs perpetrated against minorities.

To conclude the march Kalpana Wilson of the SASG and the SOAS India Society students addressed the gathering reminding everyone of the political nature of the protest and the urgent need to come together and stand up against this government.

Why we joined the protest: The current government has been complicit in spreading and encouraging an atmosphere of fear for the last four years. Mob lynchings, denial of rights of minorities, hollowing out of educational institutions, killings and harassment of journalists, perpetration and defense of rape, and most recently targeting and harassing Dalit activists connection with the Bhima Koregaon violence (while not having arrested one of the main accused), all through the promotion of the Hindutva agenda – and this has become the norm. Given this scenario, we stood up to ask relevant questions and condemn this government’s inactions. The impetus given to fear and violence was visible in the aftermath of the Kathua and Unnao rape case.

In the Kathua rape case, huge rallies in support of the Hindu culprits were carried out by people in Jammu. BJP members also participated in this rally. In a brazen and shameful act, being investigated on orders of the Supreme Court, the lawyers of the Kathua Bar Association even stopped the police team from filing the chargesheet in the case. This obviously has to be seen as part of a larger pattern where “legal activism” by right wing groups is taking place since the first edition of the All India Hindu Convention, an annual convention jointly organised by the Sanatan Sanstha and its affiliate group the Hindu Janajagruti Samiti in Goa.

At the first edition, the organisers called for Hindu lawyers to defend members of the community who were jailed and facing trials in various cases across the country. This demand was reiterated in the sixth edition of the convention in June 2017, which was reportedly attended by 132 Hindu outfits. Several nationalist legal-rights groups that are headed by former RSS members or members of its legal wing, the Akhil Bhartiya Adhivakta Parishad have been formed since then.

At Unnao on the other hand, a BJP MLA’s brother was arrested and two police officers and four constables suspended after the father of a woman, who accused the MLA and his aides of raping her, died in judicial custody. It should be noted that only after the protests and attempts of self-immolation by the girl, post the death of the father and post the orders by the high court, was any arrest made by the police officials.

Yes, the Prime Minister has broken silence over these matters. However, as the brave lawyers in the Kathua rape case have pointed out, nothing has been done to reign in BJP’s men. They continue to harass and intimidate the people supporting the victim’s families.

Our stance on the letter to the PM: With the ongoing Commonwealth Heads of Government Meeting London 2018, in the United Kingdom close to 19 universities came together to ask the Prime Minister to take actions against the culprits in the Kathua and Unnao cases, and wrote a joint letter to the Prime Minister (“said letter”). This letter was drafted under the aegis of an organisation which claims to be an umbrella organisation representing all Indian students and student societies in UK (“said organisation”).

We applaud their “humanitarian” initiative to ask tough questions on women’s safety in India. Wanting to present this non-political stance to the Prime Minister at the town hall meeting, the members of said organisation were at the last minute asked not to participate in the “Bharat ki Baat Sabke Saath’ programme. They had been issued tickets to this meeting, where Prime Minister Narendra Modi was addressing the diaspora, however we understand that their invitations were rescinded at the last minute, thus denying their fundamental right to speech and expression (which they claimed to be exercising by taking the opportunity given by the Prime Minister to come and interact with him at the town hall meeting). 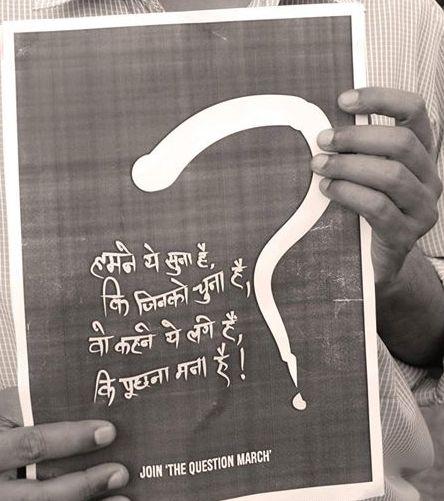 (Translation: We’ve heard that,
those who have been elected,
are now beginning to tell us,
questions are not to be asked.)

It is a different matter that we at SOAS India Society have issues with the contents of the said letter (since it fails to mention the environment of fear and intimidation being propagated in India by the current government, does not condemn atrocities against Dalits and Muslims, and does not look at patters of the crumbling democracy. The said letter has an extremely narrow scope of demands with respect to “women’s safety issues” which are of course important and urgent matters but are not the immediate concerns in the cases of Kathua and Unnao, as clearly noted above.

The letter therefore, in our opinion clearly misses the broader political backdrop to these particular crimes against women and minorities). What is probably of greater concern here is that the said organisation which asked these tough humanitarian questions on “female safety in India”, and was relying on the “democratic” space provided by the Prime Minister, had the doors shut at its face at the last minute.

Perhaps because of this incident, we do not need stronger evidence in support of our broader cause/claims (and reasons for our protest at Downing Street today), when we indicate that issues much larger than “women’s safety” are at play here. We urge the signatories of the letter, the said organisation, and the diaspora to not turn a blind eye to communal, right wing, Hindutva agenda of this government.