NEW DELHI: On the evening of April 17, two kerosene bombs were hurled at the residence of the Editor of the Shillong Times, Patricia Mukhim, in Umpling, Meghalaya. “My appeal to Meghalaya Police and Crime Branch is to please nab these culprits and restore public confidence. Criminals are getting away too easily. Police should take every case of arson and attack on press freedom with the seriousness it deserves. Please rise to the occasion.”, wrote Mukhim in a Facebook post last night after the attack.

India has seen a surge in attacks on journalists with 142 attacks being reported between 2015-2017, according to the latest National Crime Records Bureau (NCRB) data. This, along with the murder of Gauri Lankesh and other journalists, becomes a matter of concern regarding the freedom of press and the safety of journalists in the country.

After the murder of Gauri Lankesh in Bengaluru, the country came out in protests against those who attacked not only Lankesh, but also the freedom of expression and the press. The way Lankesh was murdered, outside her home, at point-blank range and yet the case remains unsolved leaves much to wonder about the security of journalists in the country.

The Constitution guarantees the freedom of press only under Article 19(A) which guarantees every individual the freedom of speech and expression and yet we slipped three places down to 136 among 180 countries in the 2017 World Press Freedom Index?

As a democratic nation and with the press having no governing body, the statistics and the rankings suggest the failure in the execution of what is actually one of the fundamental rights of any individual.

In a 2017 report made by the Hoot, titled “The climate for free speech in India”, it was mentioned that not only 11 journalists were killed, 46 were attacked, 12 were threatened and 27 faced police action.

Among these attacks, three stood out for being directly related to the kind of work the reporters did. 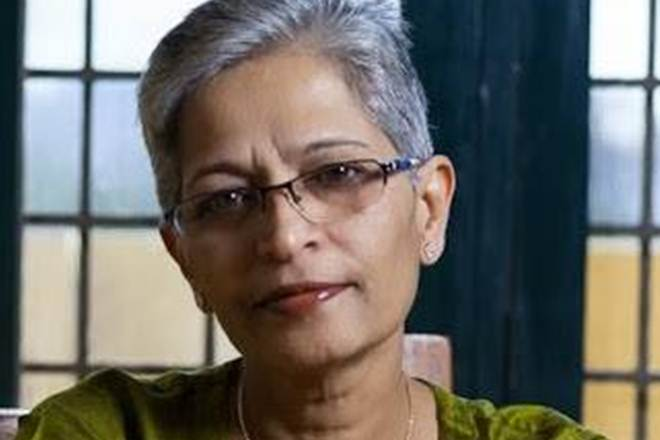 Gauri Lankesh was a journalist-turned-activist and worked as an editor in a newspaper run by her father, ‘Lankesh Patrike’ and ran her own weekly, ‘Gauri Lankesh Patrike’. Lankesh was well known for her criticisms against extremist right-wing Hindu outfits and also for opposing caste-based discrimination. She was shot dead, at point-blank range, outside her residence on September 5, 2017. The murder sparked great outrage throughout the country and started the discourse on the violation of freedom of expression as a fundamental right.

Nationwide protests were held and even major political parties came out and spoke about what they considered a blatant attack to freedom of the press and the government’s attempt at silencing the voices of dissent. 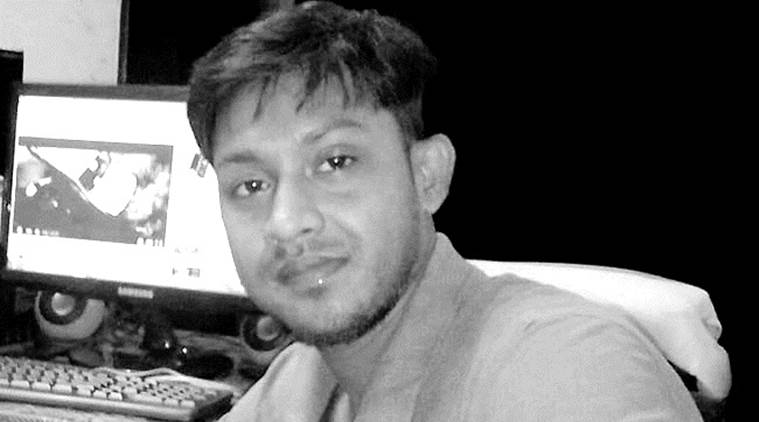 Shortly after the murder of Gauri Lankesh, Shantanu Bhowmik, a reporter who worked for Din-Raat, a local cable TV news channel in Agartala, was killed on September 20, 2017. Bhowmik was covering an agitation by the Indigenous People’s Front of Tripura in Mandai area of West Tripura when he was hit from behind and abducted. He was later found covered in injuries and was rushed to the Agartala Medical College where he was declared as brought dead.

Even Amnesty International stated that state governments should do everything in their power to prevent journalists from becoming targets because of their viewpoints and affiliations. 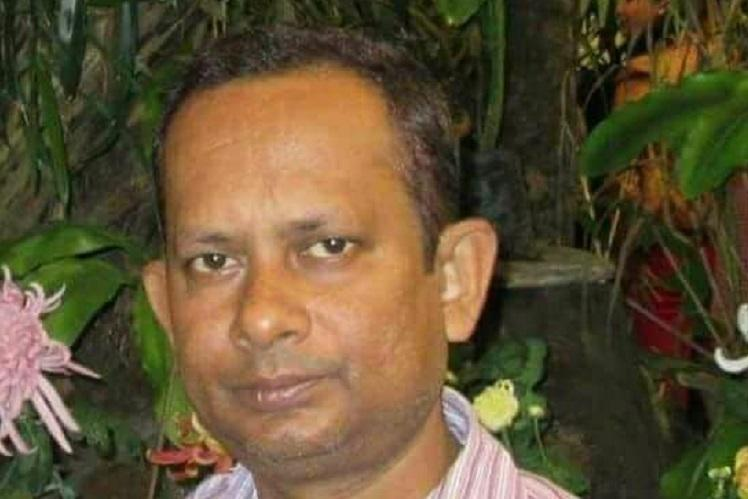 Two months right after the attack on Shantanu Bhowmick, another reporter was killed in Tripura on November 21, 2017. The reporter, Sudip Datta Bhowmick, was allegedly shot by a jawan of the 2nd Tripura State Rifles (TSR) at RK Nagar, 40 km away from Agartala.

Bhowmick was a senior reporter at Syandan Patrika, a leading Bengali newspaper in Agartala. According to the editor of the newspaper, Subal Kumar Dey, Bhowmick had gone to meet the Commandant of the 2nd TSR at RK Nagar, after making an appointment and apparently had an argument with a Protective Service Officer (PSO) of the Commandant in front of the Commandant’s office and got shot. Journalists in Tripura and all across the Northeastern region demanded for an investigation to be held by the CBI.

The short span of time in which the three murders took place left the nation shocked and questioning the control the authorities were trying to have over the freedom of speech. Nationwide protests were held in order to speak up against the violation of freedom of expression.

In the wake of recent attack on the residence of Patricia Mukhim in Umpling, Meghalaya, has started the debate on this violation again and raises the question as to why this has been so frequent in the Northeastern region and why it is the local and regional journalists who are always under the threat of an attack.

Mondal, who works as a photojournalist for Times of India Kolkata city bureau and Chattopadhyay, who works as a reporter with the regional ETV Bharat television channel were assaulted when they were covering a local village council election’s nomination process.

“Attack on journalists in India who are just reporting the news need to stop. We urge the police to promptly take action against those responsible for assaulting Biplab Mondal and Manas Chattopadhyay to send a message that journalists are allowed to do their jobs unimpeded.”, said Steven Butler, Community to Protect Journalist (CPJ) Asia Program Coordinator from Washington DC.

On March 25, Navin Nischal, a stringer for the Hindi daily Dainik Bhaskar and Vijay Singh, a freelance contributor to local magazines were run over by an SUV in the evening as they were riding together on a motorbike. The incident took place in the town of Arrah along the Arrah-Sasaram Highway.

“The deaths of Navin Nischal and Vijay Singh are yet another example of how vulnerable journalists in India’s small towns are to violence. Police in Bihar state must thoroughly investigate Nischal and Singh's deaths to determine the motive, and ensure that any perpetrators are brought to justice.”, said Butler.

A 2016 CPJ special report, “Dangerous Pursuit”, found that small town journalists in India face greater risk in reporting than those from larger outlets, and that a culture of impunity makes the country's press vulnerable to threats and attacks.

Now, along with the print media being at a constant threat of attack from various sources, the electronic media is also now under the threat of having the freedom of speech violated.

On Monday, April 16, the Hyderabad police filed an FIR against Swathi Vadlamudi, cartoonist for the Hindu, for her cartoon commentary on the Kathua and Unnao rape cases. A Hindu nationalist group filed a complaint against the cartoon that went viral on Facebook. The FIR was condemned by various journalist bodies as an attack on the freedom of speech and expression.

The Chairperson of the National Alliance of Journalists (NAJ) Gender Council, Ms. Sujata Madhok, the President of the NAJ and the Delhi Union of Journalists (DUJ), Mr. S.K. Pande and the Secretary General of the NAJ, Mr. Koteswarao spoke against the treatment of women journalists this week.

In a joint statement, they said, “We condemn these incidents that reflect the special targeting of media women, be it through physical violence, vicious trolling on social media, filing of court cases or subtle aggression displayed in direct interactions by politicians and others in power today.

Although this isn’t the first case of internet censorship. On September 9, 2012, political cartoonist, Aseem Trivedi, was arrested in Mumbai on charges of sedition. He was granted a bail and released and the charges of sedition were later dropped in October.

Trivedi also started a cartoon campaign called “Cartoons Against Corruption”, to support the 2011 nationwide peace movement, “India Against Corruption”. He also launched a website “www.cartoonsagainstcorruption.com” and put his cartoons up on display at MMRDA grounds, Mumbai during Anna Hazare’s hunger strike. 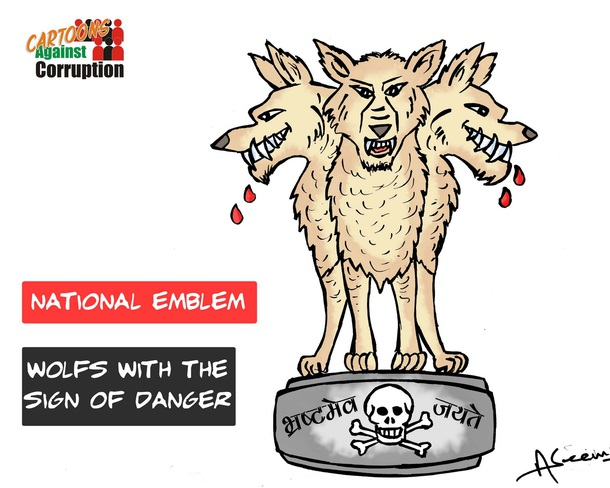 Pictured here: One of the many controversial cartoons posted by Trivedi on his site.

The site was banned by the Mumbai Crime Branch for displaying “defamatory and derogatory” cartoons on December 2011. Following this, Trivedi, along with a friend, Alok Dixit, started “Save Your Voice” campaign fighting against censorship on the internet.

As per the CPJ research, India has 40 unresolved journalist murder cases since 1992, out of which the motive behind 27 of the cases was directly related to their work. According to the report, most of the journalists covered either politics or corruption. It also noted that India never responded to UNESCO’s request regarding the judicial status of the killings.

As always it remains easy, and has become easier, to shoot the messenger.