Mughal Patronage and the Development of Modern Hindu Art

Namdev, a medieval-era Bhakti poet from Maharashtra, extolled in his many verses the attributes of his god Krishna. One of his particularly bizzare verse, however, might puzzle a modern Krishna devotee, it reads; “Wonderful is your turban, sweet is your speech. Why did you appear in Dwarka as a Mughal?”

Most modern translations of course, differ in interpretation, transcribing the second line as a rather out-of-place complaint, “Why are there Mughals in the city of Dwarka?”, but this translation is unseemly at best, as the rest of the verses dive straight back into praises for Krishna. Not to mention, the Mughal dynasty had not subjugated Dwarka in Namdev’s lifetime.

Seen in the context of apocryphal tales about Bhakti poets, however, Namdev’s experience of meeting his God in the form of a Mughal is not unusual. The Jewish-mystic and Ram devotee, Sarmad Kashani, refused to appear clothed before any individual, except for the Mughal prince Dara Shikoh, whom he held in reverence. The poet Tulsidas too is believed to have met his god Ram in the form of a prince, and it is implied that this horseback, green-robed prince was of Muslim stock, as this encounter supposedly took place in Chitrakuta, then under Mughal rule.

In today’s day of firebrand Hindutva politics, however, the very idea of Ram or Krishna appearing to their devotees in the guise of a Muslim seems almost unthinkable. Indeed, in October of 2016, prominent Muslim actor Nawazuddin Siddiqui was denied the ability to take part in the Ram-Leela (theatrical Ramayan retelling) in his hometown of Ramnagar by Shiv Sena activists, solely in light of his religious background.

To deny a Muslim the right to take part in a Ram-Leela is to wholly deny the complex history of this ancient tradition, which is interspersed with Islamic culture and patronage; indeed, the first patrons of this celebrated festival were none-other than emperors of the Mughal dynasty itself. Delhi’s first Ram-Leela committee was supervised by none-other than the last Mughal, Bahadur Shah Zafar, and Muslim actors continue the long standing tradition of playing characters, including protagonists, in the play.

This stands in stark contrast with the current narrative pushed by the far-right factions of the Sangh Parivar, including Chief Minister of Uttar Pradesh (UP) Yogi Adityanath, who maintains that Mughal and Islamic history are alien to Indian culture and is not to be celebrated as such, with even the iconic Mughal architectural masterpiece, the Taj Mahal, being dropped by from the UP tourism booklet by the ruling BJP government since October 2017.

Yet, the presence of Muslims in the Ram-Leelas is a historical paradigm that goes back to the early Mughal Empire itself. The Mughal emperors lavishly celebrated the festival of Dussehra, wherein the Ram-Leelas took place. Shah Jahan is known to have weighed himself in gold which was then distributed to the poor, and enacted the Mughal ceremony of releasing a Neelkanth bird, itself referencing the symbolic victory which the festival imbibes. This was followed by Farsi and Hindi recitations of Tulsidas’ Ramcharitmanas.

The procession accompanying the play, led by Muslim water-carriers, would pass under the residences of Mughal courtesans, who showered donations upon it irrespective of faith. Not only Dussehra, but other Hindu festivals such as Holi and Diwali (under the name Jashan-e-Chiraghan) were celebrated and patronized lavishly by the Mughal court.

The celebration of festivals were not the only aspects of Hindu religious culture which the Mughal Empire engaged in. Babur is known to have advised his successor Humayun to refrain from cow-slaughter, which was maintained even in the time of Muhammad Shah ‘Rangeela’. Emperors including Akbar are known to have exclusively drunk Ganga water, which often had to be hauled to them in caravans during times of campaigning, it being regarded as an ‘elixir of immortality’.

Even the boogeyman of Hindutva revisionism, Aurangzeb, is known to have issued land grants and assurances of protection to several Hindu temples, notably in Varanasi. Jadunath Sarkar’s recent translation of the Farsi Tarikh-e-Dilkusha, written by a Hindu soldier serving under Aurangzeb, highlights the semi-divine status Hindus in Mughal India held Aurangzeb in.

Yet, these aspects of the Mughal Empire seems to have been willfully and maliciously neglected by modern Hindutva outfits. In late March of 2017, Chief Minister Yogi Adityanath addressed a large congregation in his constituency of Gorakhpur. Amidst fanfare, he delivered a Hindutva narrative about Tulsidas, which painted him as being at odds with his contemporaneous Mughal emperor, Akbar, whose authority he supposedly refused to recognize and whose court he refused to visit. This view seems to be inspired by Priyadasi’s ahistorical hagiography of Tulsidas, a Hindutvadi favorite, which sees Tulsidas being imprisoned by Akbar, and invoking an army of monkeys to miraculously save him.

This narrative is not only historically inaccurate, in fact it’s the opposite of recorded events. Instead of imprisoning Tulsidas, Akbar guaranteed his protection, and instead of refusing to meet Akbar, Tulsidas did indeed converse at length with him in Kashi. The accounts which verify these encounters are housed in the Tulsi Museum in Jaipur. Some scholars have even interpolated from Tulsidas’ verses that his magnum opus, the Ramcharitmanas, was in fact written in a mosque, where he was safe from the persecution of orthodox Hindu scholars, who were opposed to his translation of the Sanskrit Ramayan into the layman’s Awadhi.

Aside from furthering scriptural access to the common man, Mughal scholarship can also be credited with spreading Hindu ideas to a wider non-Hindu audience. Akbar is known to have sponsored translations of Hindu scriptures, especially the Ramayan and Mahabharat first into Awadhi, and later into Farsi for the enjoyment of the largely Farsi speaking Mughal court. Imbibed in these texts, especially the Farsi Mahabharat (Razmnama, or the book of wars), there is an evident fascination and even reverence accorded by the Muslim translators for Hindu thought, with Krishna even being conflated with the Islamic Prophet Muhammad.

The Mughal prince Dara Shikoh is known to have personally translated a large number of Hindu texts, such as the Upanishads, into a compilation known as the Sirr-e-Akbar, as well as a treatise on Hindu-Muslim syncretism, namely the Majma-ul-Bahrain. It was these texts, the first to be accessible to western scholars, which began the long-standing western fascination with Hinduism.

A brief glance at the illustrated folios of these texts reveal no small amount of influence on modern Hindu art. Indeed, the depiction of popular Hindu deities in these folios are often identical to their modern depictions in Hindu ‘calendar-art’, arguably the most recognizable form of devotional Hindu art today. Even the demonic figures are depicted identical to Jinns in previously made Islamic art, an influence that carries on to this day.

Thus, far from being a culture alien and opposed to Hinduism, the Mughal Empire served as a patron for it. It is due to Mughal sponsorship that we can see the evolution of modern Hindu art, be it visual or literary, into its popular modern distinctions and depictions. 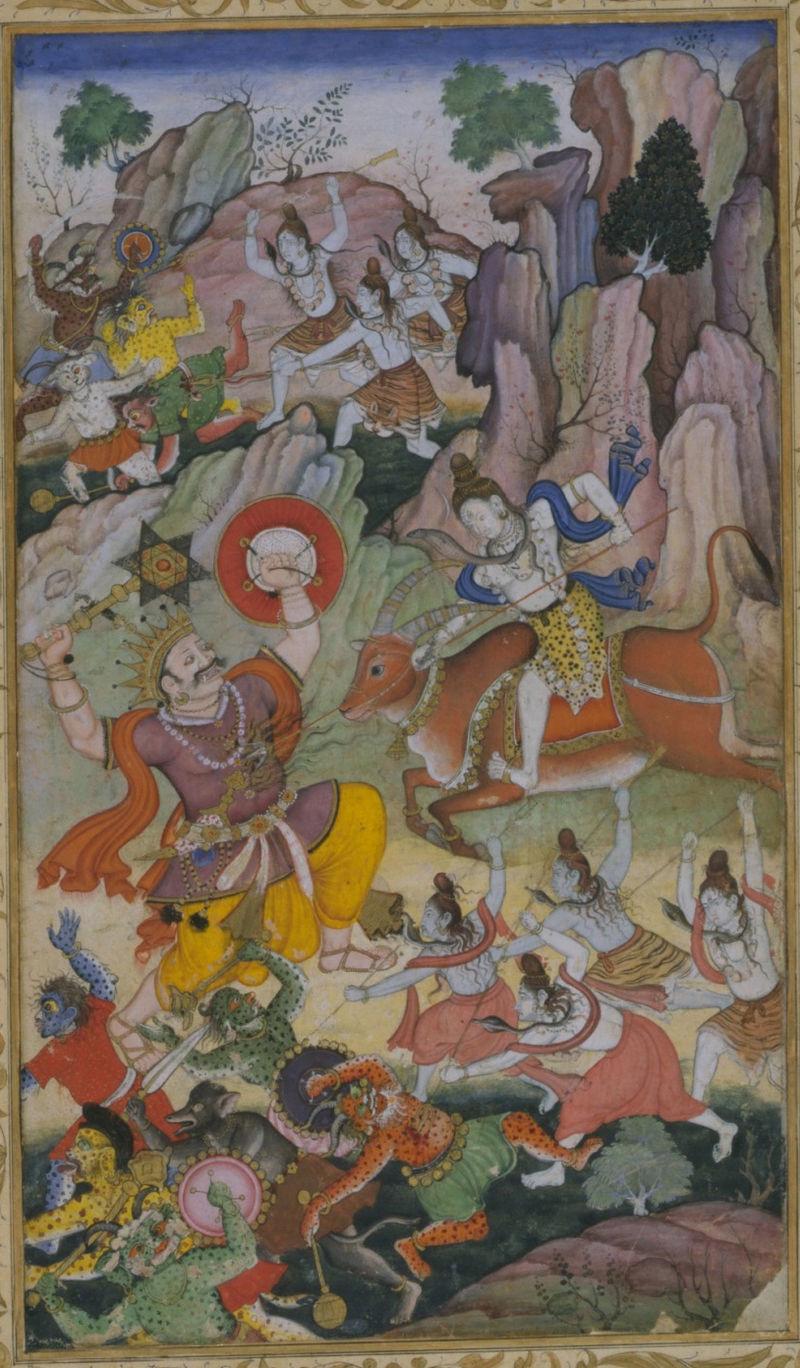 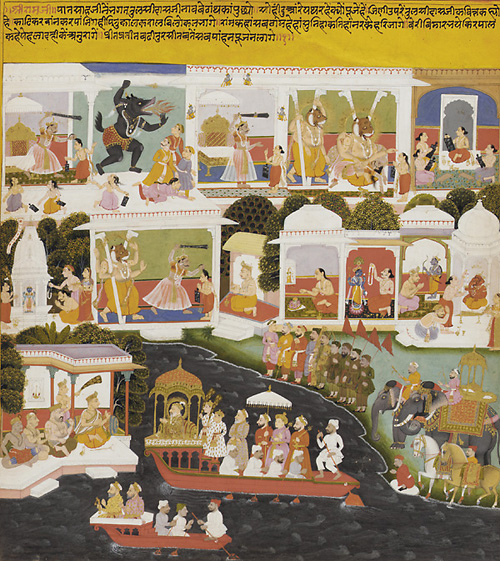 (Far from persecuting Tulsidas, Akbar is recorded to have met him in Kashi and guaranteed his protection. Credit: Wikimedia Commons)