The Free School Under the Bridge

A unique school under the Yamuna Bank metro bridge

NEW DELHI: Underneath the Yamuna Bank metro bridge, is a unique school which has neither uniforms, nor classrooms - called simply the ‘Free School Under The Bridge.’ It offers a ray of hope to the forgotten children of daily wage and domestic workers of the area. With over 300 students coming in regularly, from grades 3rd to 8th, the classes are divided into two shifts, where the boys are allotted the morning slot and the girls the evening slot.

Founded by Rajesh Kumar Sharma in 2010, the school started its journey with only a couple of students. Kumar recounts, “I want them to have a future, their parents don’t care about studies, they are uneducated. But, I know education is important for all children. I want to work for them, because no one else will.”

With little to no support, he began investing time and energy into his students. His motivation to educate, comes from his own personal story. An incomplete engineering degree, and having faced the reality of lack of opportunity and resources, he believes that to study is the only way out of poverty. Teaching alongside him on boards painted on the walls of the School are co-founder Laxmi Chandra and Shyam Mathur. They too, come from backgrounds very similar to the children they teach.

Laxmi Chandra tells us, “My parents are farmers, we are from Bihar, we didn’t have any money when we came here. People in my slum were kind to us, that is why I could study. I want to help all these children because I’ve been in their position.” He is the sole breadwinner in his family and sustains his household by taking tuitions for students in the neighbouring colony. 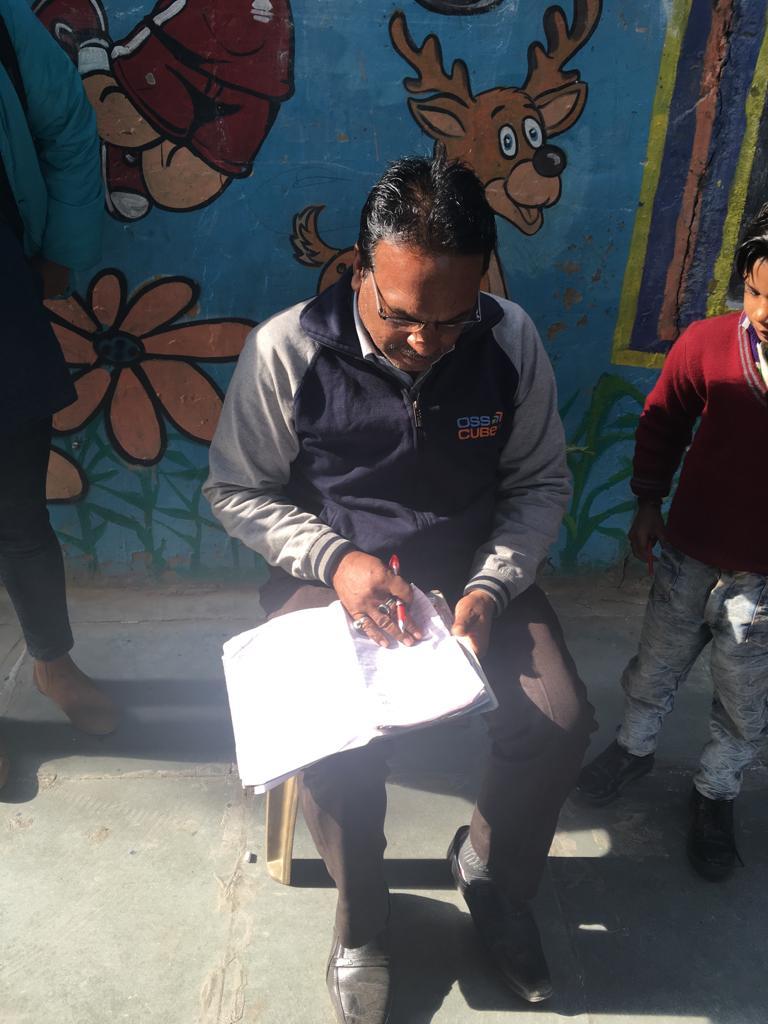 The endeavour of creating a free school hasn’t been an easy one, the participation of volunteers and donations of those who feel for the cause are central to the project. “From the sweaters and shoes which they’re wearing to the pens and notebooks they are using, someone has been kind enough to donate” Rajesh Sharma tells us. He adds “We don’t want to be associated with an NGO. Many have approached us, they ask us to put up their boards and make rooms for us, but I’ve rejected all such offers. Most of them just want a way to convert and justify black money, we are simple people, we don’t want anyone using our children that way.” 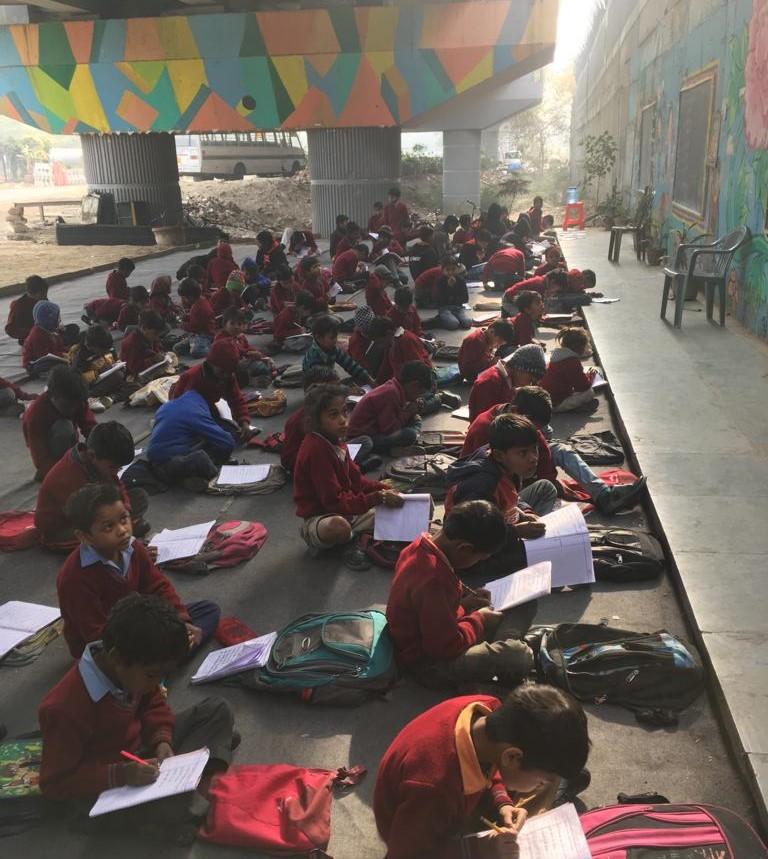 But, the main stars of the school are neither the teachers, nor the volunteers, but the students. The teachers were all consistent in their view that it’s only because of the students’ curiosity and willingness to learn that they too feel motivated to teach and help them. These students from impoverished backgrounds, although many are enrolled at their local government schools, come regularly to classes under the bridge to get guidance and help with their curriculum. Shyam Mathur adds that, “the government school does not teach them English well, they have a very few classes and those too are on and off. But, I do believe that it is very important for them to know English and that’s why I focus on teaching them English.”

With their aspirations now rooted to a firmer base and support structure, the students are able to dream of a world brighter than their immediate surrounding. Laxmi Chandra tells us, “The reason I do this is for the welfare of India, educating these children is a step towards eradicating poverty. Humko toh bas garibon ka kalyan karne ki iccha hai.”

The teachers also help those children who have never had any form of education before, they guide them and build their concepts from the ground up. They also help these students get admission to the local government school. Suraj Matthew (8) recently joined the school, he had previously received no education. The teachers and volunteers are helping him learn so that he can soon join the government school and continue his studies formally. He lives only with his mother who works as a domestic helper.

SURAJ (14) is in 7th standard, he started regularly coming to the school in 2015 when his family shifted to the Yamuna bank slum area. His parents are both daily wage labourers. 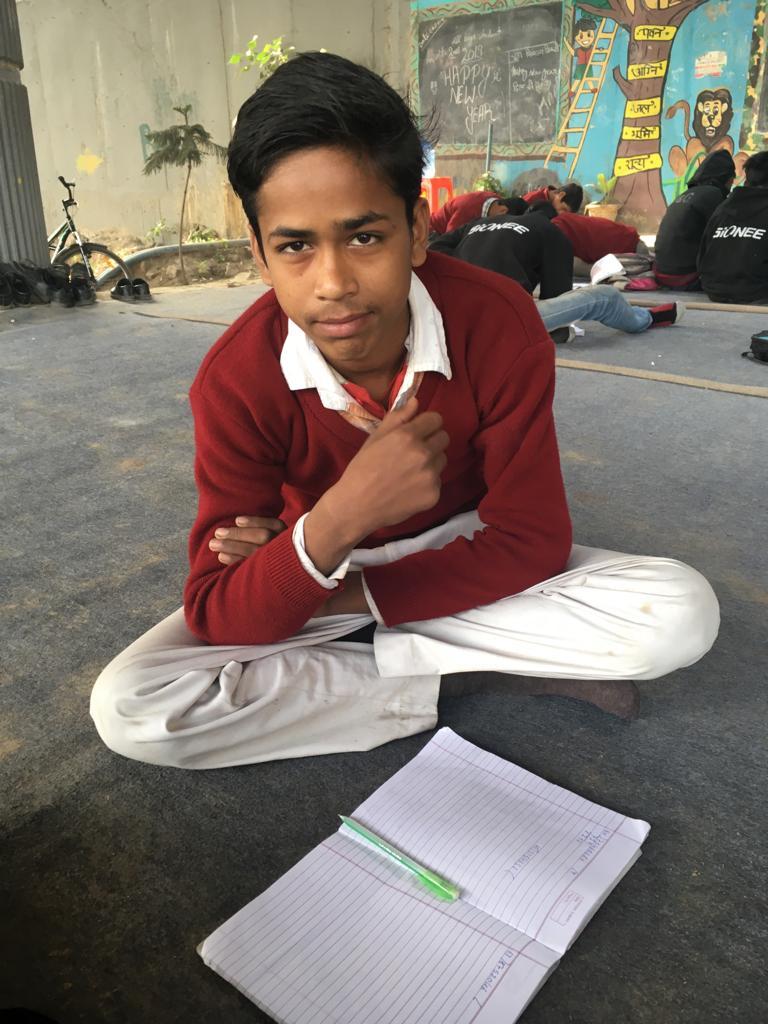 “I like coming here, all my friends also come here because we get help with studies. When I don’t understand something in school, I can come here and ask sir about it. I get my homework here sometimes and sir helps me with that also.”

“When I grow up, I want to either be a police officer or a doctor. I really want to study after 12th class and go to college also. I like studying.”

SUNIL (11) is in 3rd standard. His father repairs televisions and his mother works as a domestic helper in the colonies close by. He’s a bright and bubbly child. 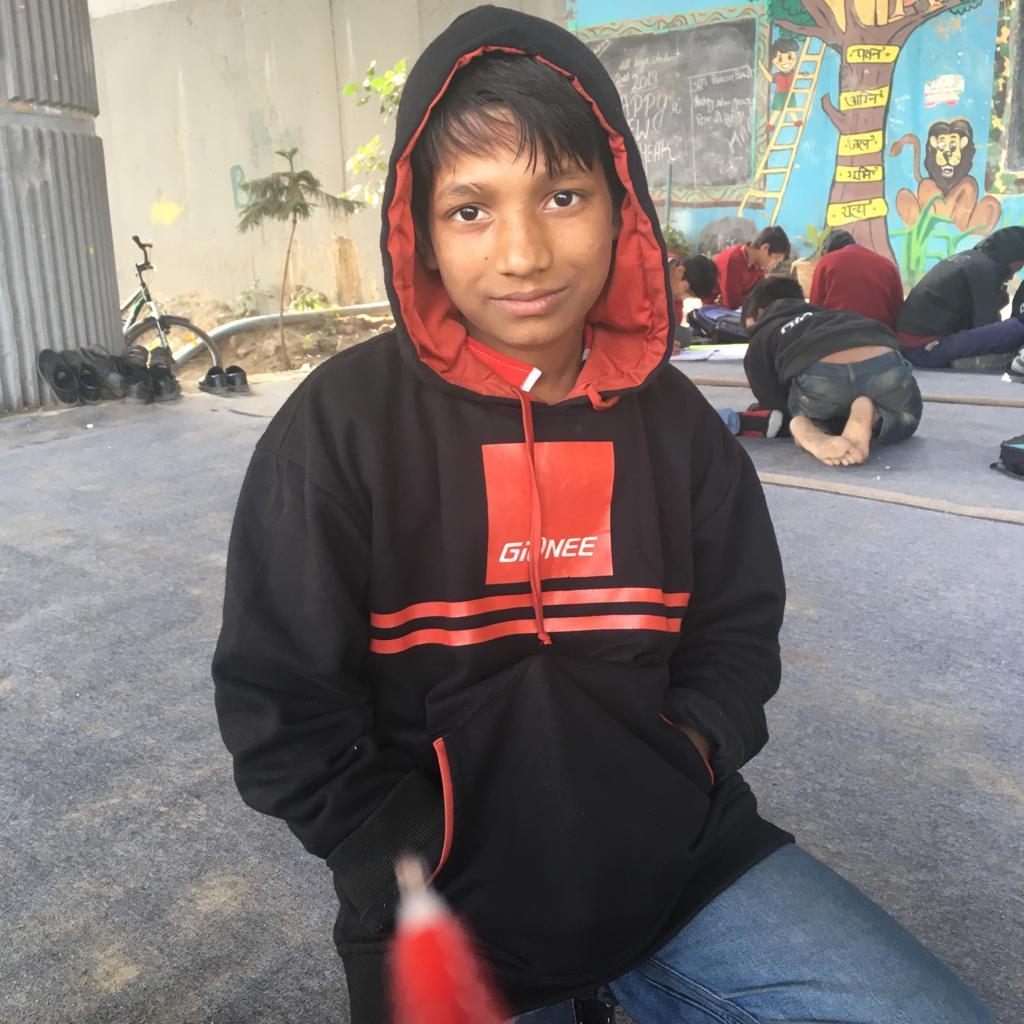 “I come here by 8:30 to study, sir comes a little later. I come every day, because I like to study here. We’re studying Hindi right now. We have holidays right now, so sir is covering up what will be taught in school after it opens.”

“I like playing Kabaddi, but studying is important so all of us first study and then play.”

“I want to be an engineer when I grow up, I want to work with aeroplanes.”

MONU (13) has been studying at the school since 2015, he is now in 6th standard. His father is a driver and mother is a housewife. They shifted from their earlier slum colony because it got flooded due to the monsoons, he heard about the school from his current slum neighbours.

“We get to play here on the weekends, Sir gets rackets and cricket bats for us. So I come here pretty much everyday of the week, I like coming here.”

“I like studying maths, Chetan Sir teaches us well, he will come later today. He makes us study extra these days because we have holidays.”

“I’m the youngest in my family, my elder sisters are going to be married, but my brother is studying, he will work in a hospital. I want to be like him and study, he will get married after he finishes studies.”

With little less than half of India’s children having access to quality education, the situation is rather grim. Initiatives such as ‘The Free School Under the Bridge’, do help bridge the gap between the uneducated poor and the opportunity of social mobility. Similar projects have come up in major cities like Mumbai as well.